It was a much harder task than I anticipated when the grandmas started asking what to get the boys for Christmas. They have everything they need and could want so we tried to find things that they wouldn't out grow. Superhero sleeping bags. Superhero backpack/suitcases. & then Santa of course brought them scooters. So what could the grandmas get them…

I thought back to my childhood and some of the toys that I loved playing with. Actually my brother and I both did. We would spend hours setting up forts & houses in our dining room & then the army men & ninja turtles would come out to play. You see, it was much easier for me to play with my brother's toys than to try and get him to play with Barbies. I knew every Superhero, every Turtle and each of their weapons. I watched WWE & later WWF. I played Mario Kart, Golden Eye (loved Odd Job), I shot BB guns, & more nerf guns than I could count. ---I do believe this is another reason why I have boys & not girls. This mommy was 100% complete tomboy, and truthfully, probably still is!

But back to Christmas and the boys, I decided that they might like LINCOLN LOGS. They love legos so Lincoln Logs just takes it to a whole new level. 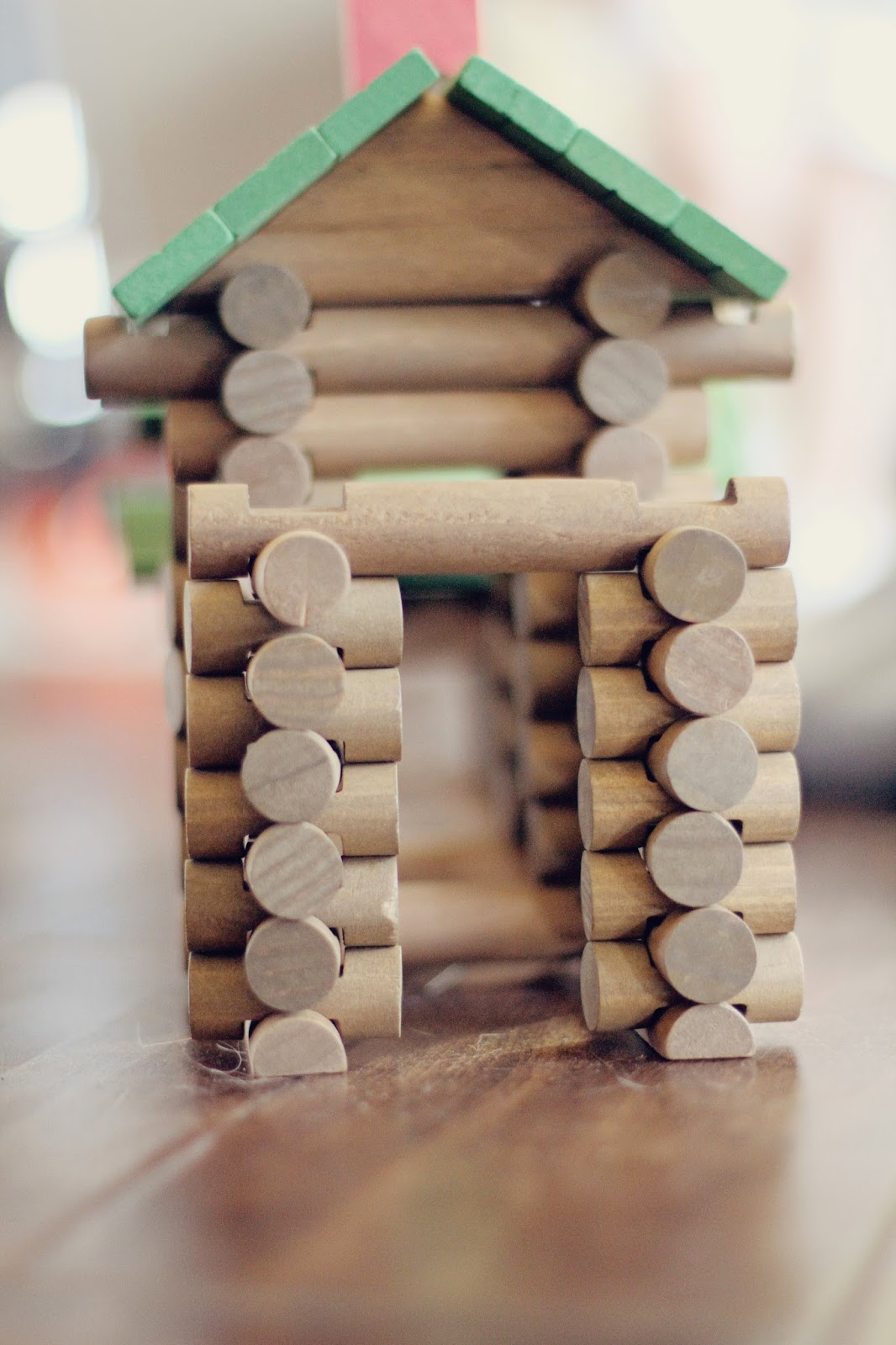 And I told you, the boys won't take off those helmets. Then again, construction can be a very tough job and certainly requires the use of hard hats. 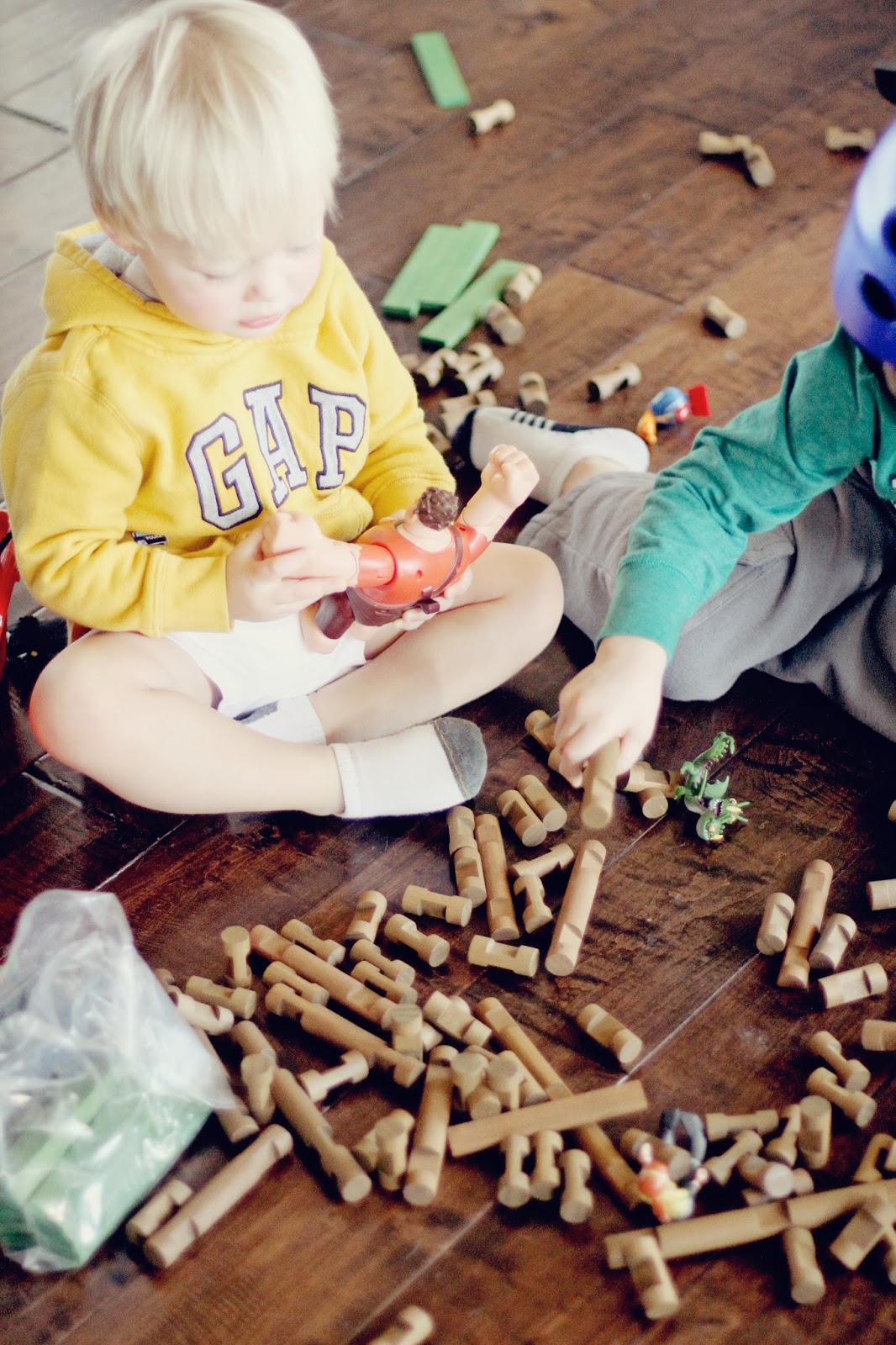 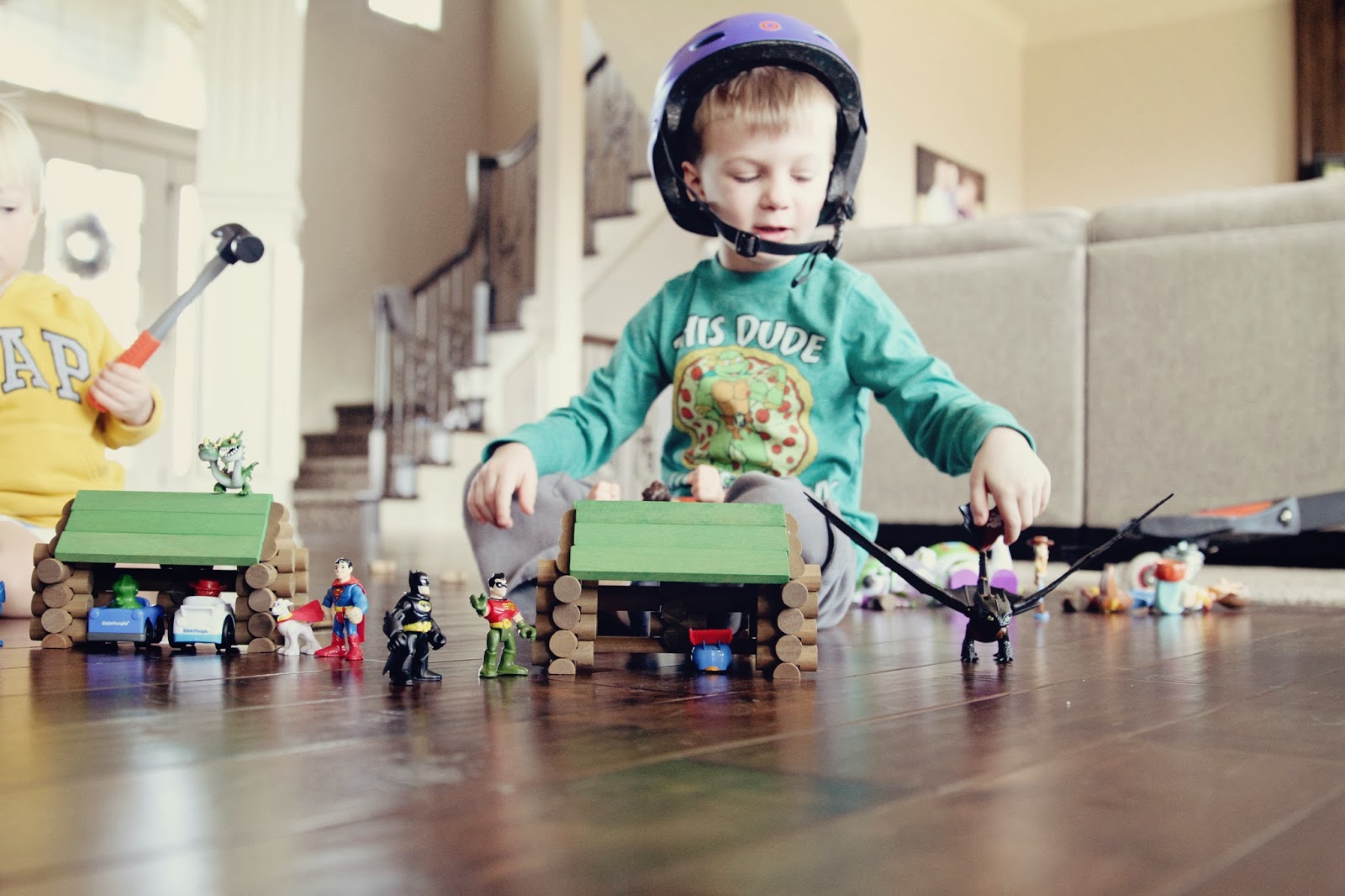 I love how my boys will take two things that they like and bring them together. They loved building with the lincoln logs---or should I say they LOVED watching me build, although they did find me all the pieces.

But they are also big Wreck It Ralph fans. & what goes together better than buildings & Wreck It Ralph, nothing. Nope not even peanut butter & jelly goes better! 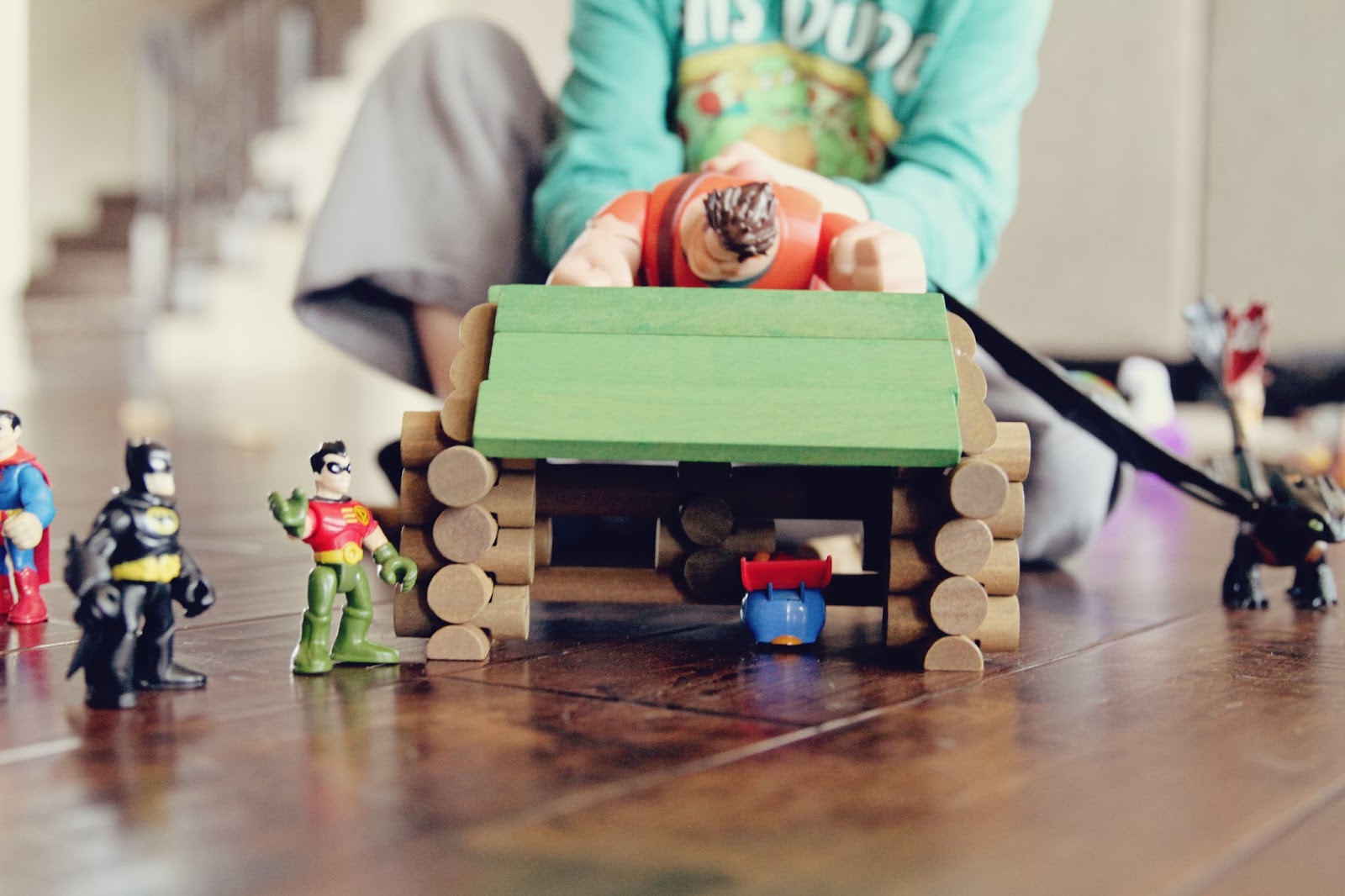 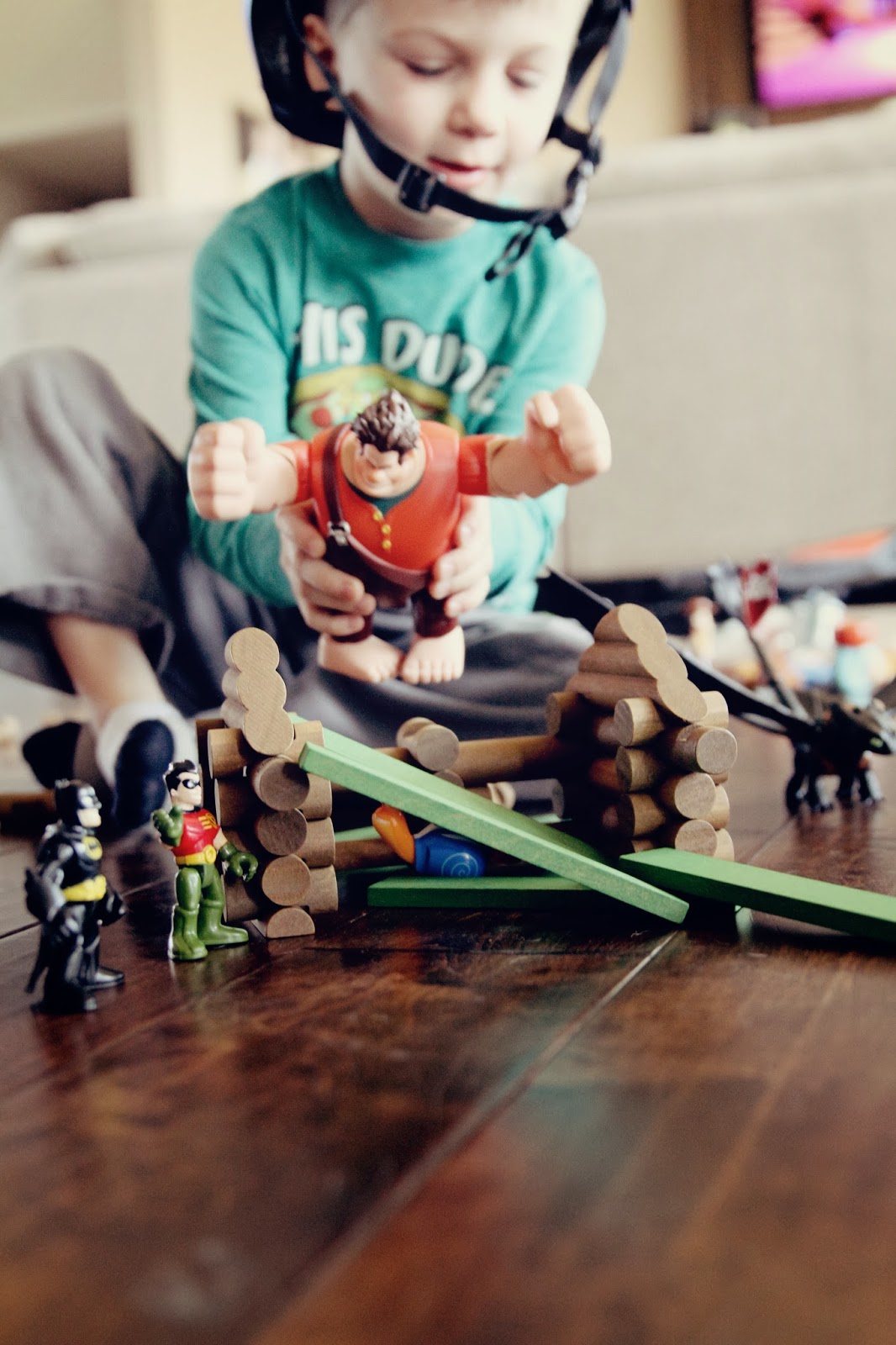 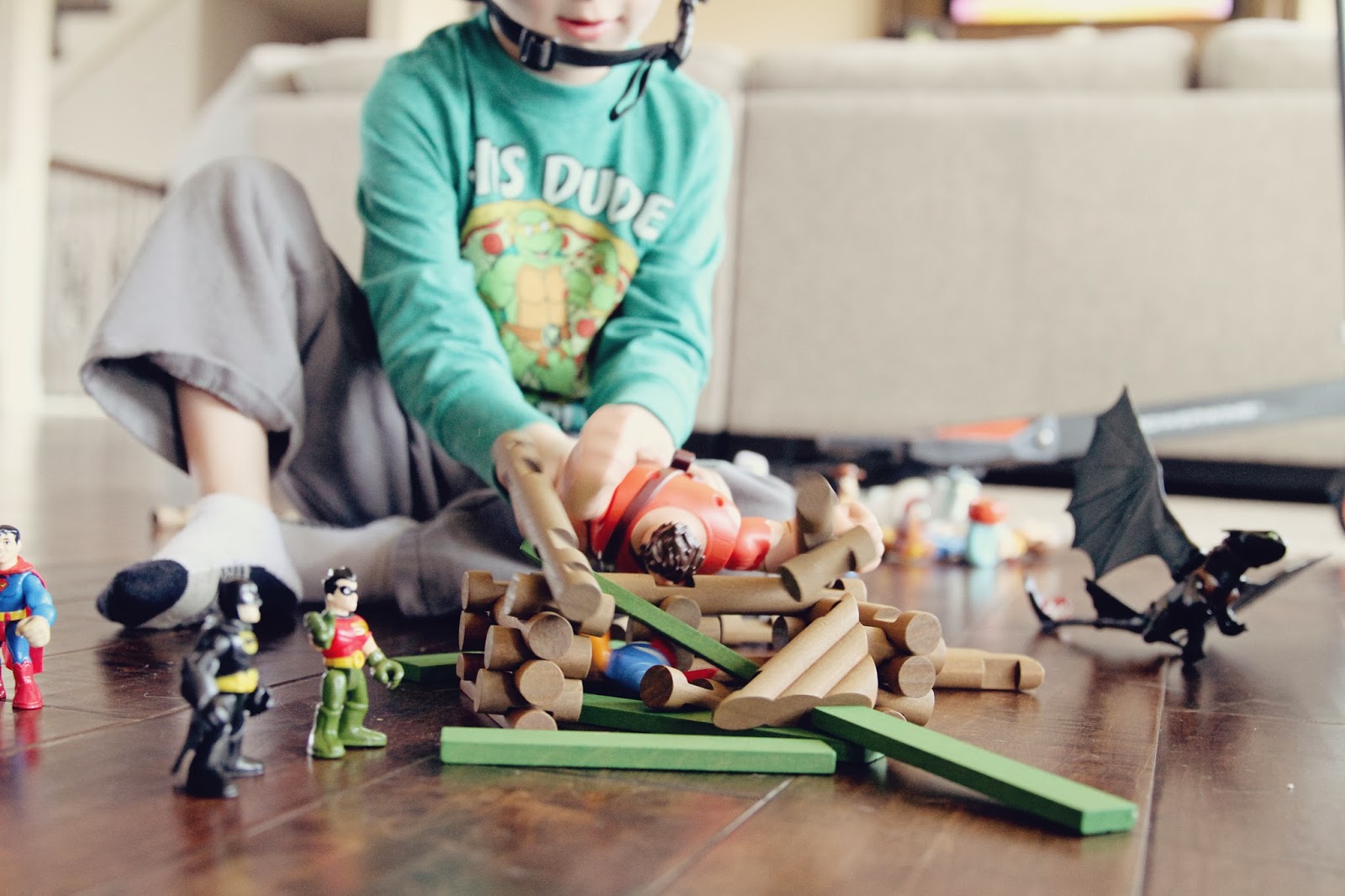 But they didn't just "wreck" the garages that I spent so much time building, the Superhero's and Toothless were there to save the day. Toothless swooped right in to save good ole' Turbo. 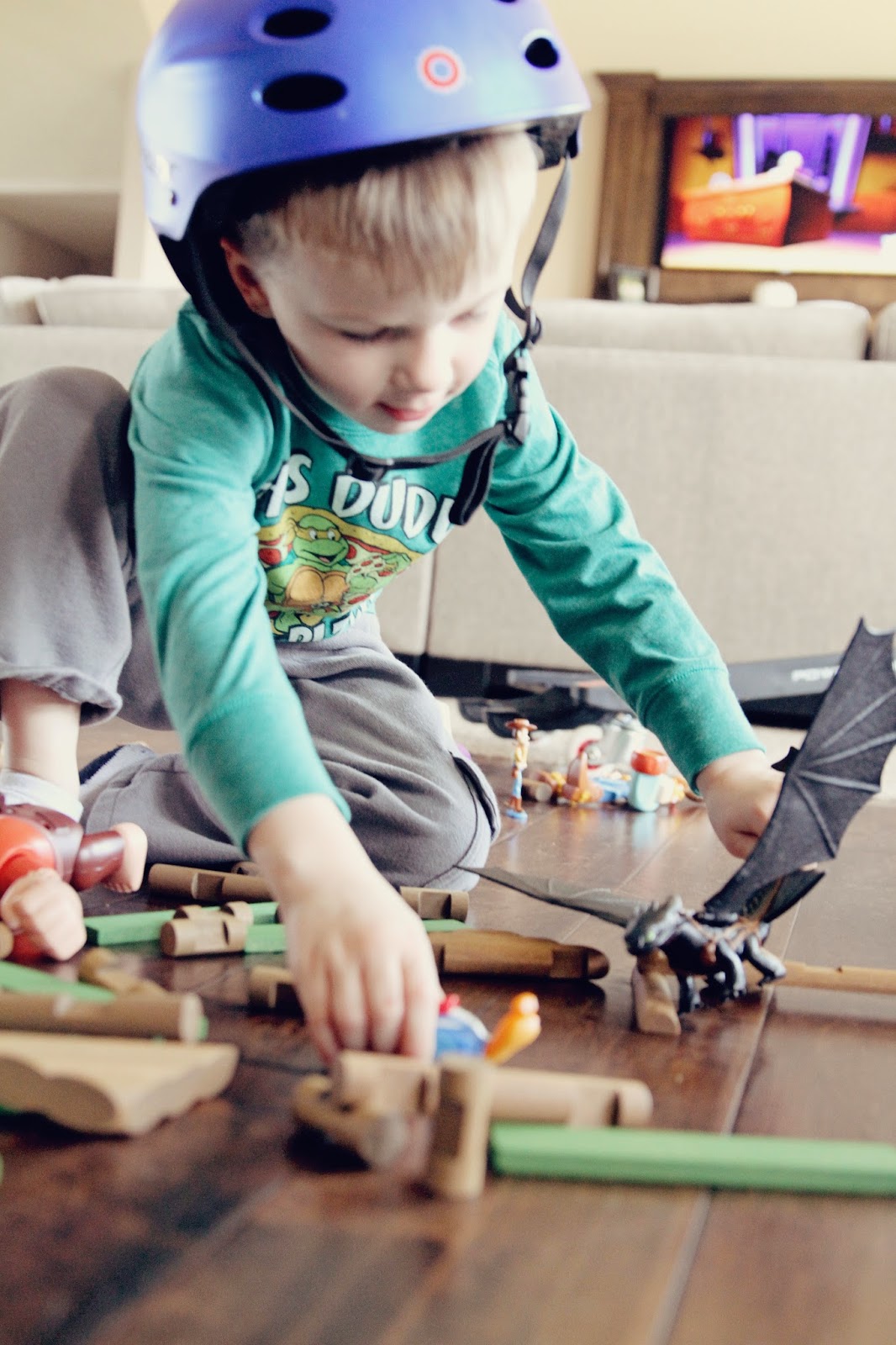 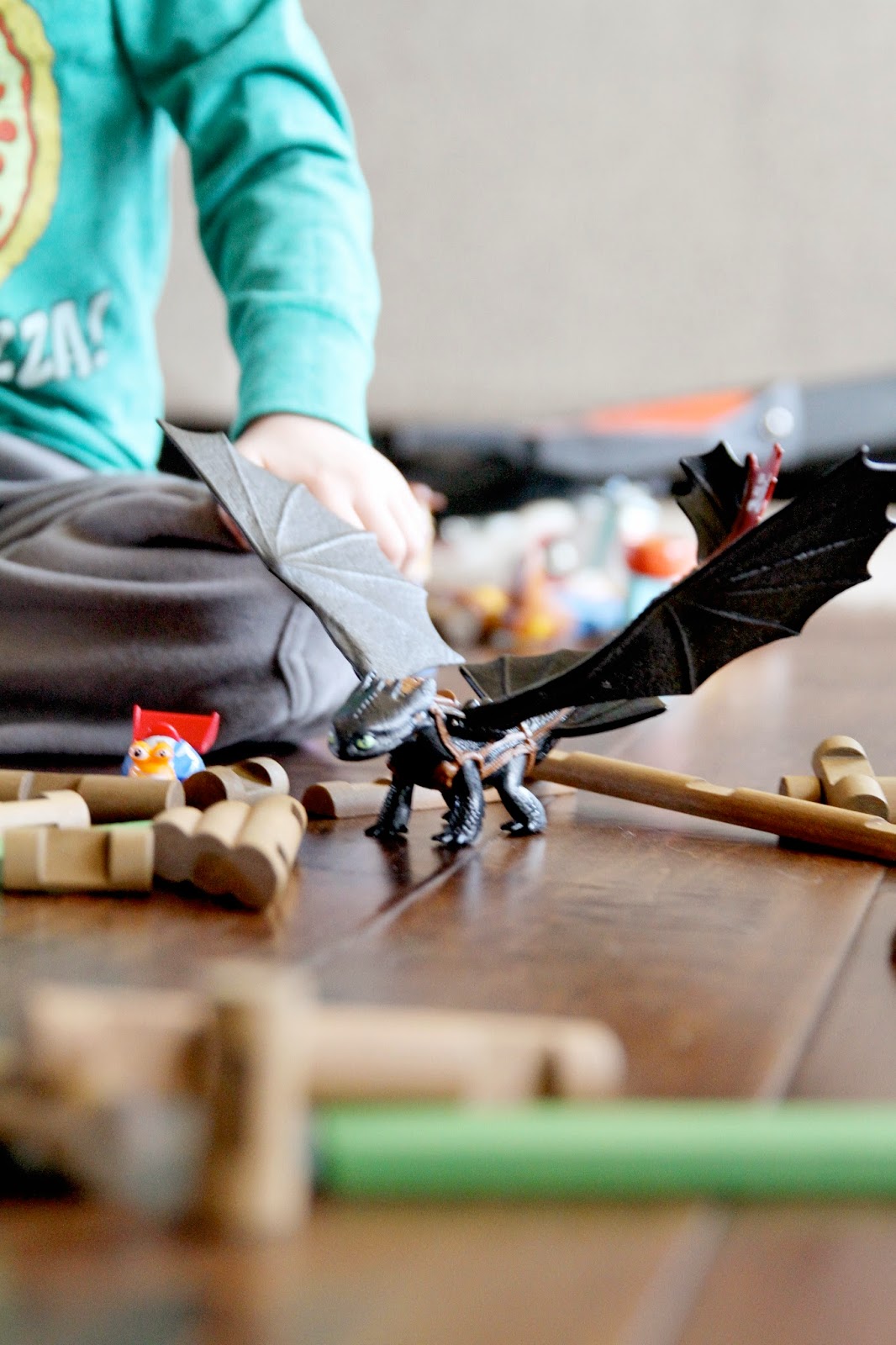 & of course Me Too, aka Logan, had to have his chance at wrecking things too. & for the next 45 minutes, I would build them & they would knock them down. 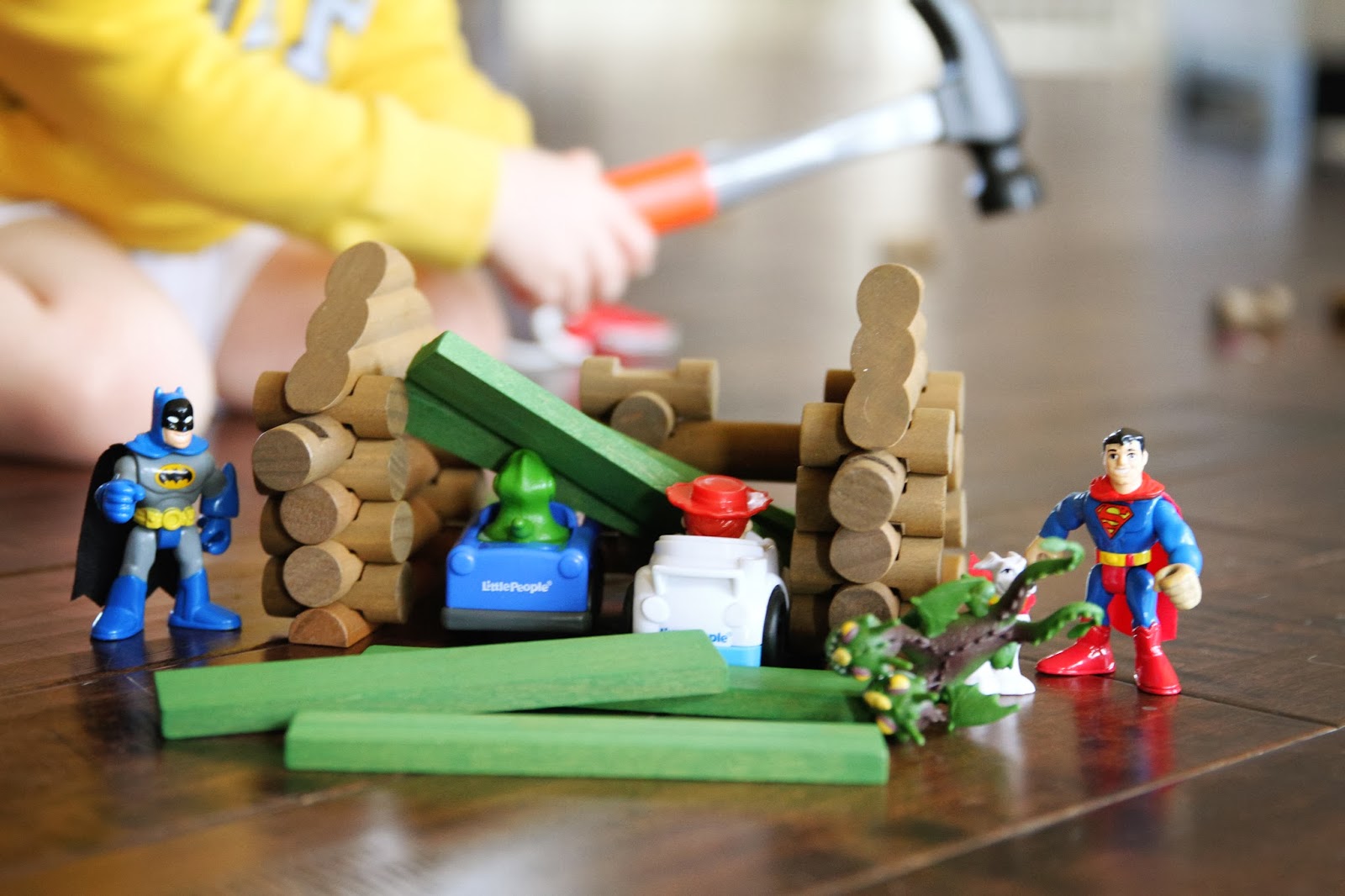 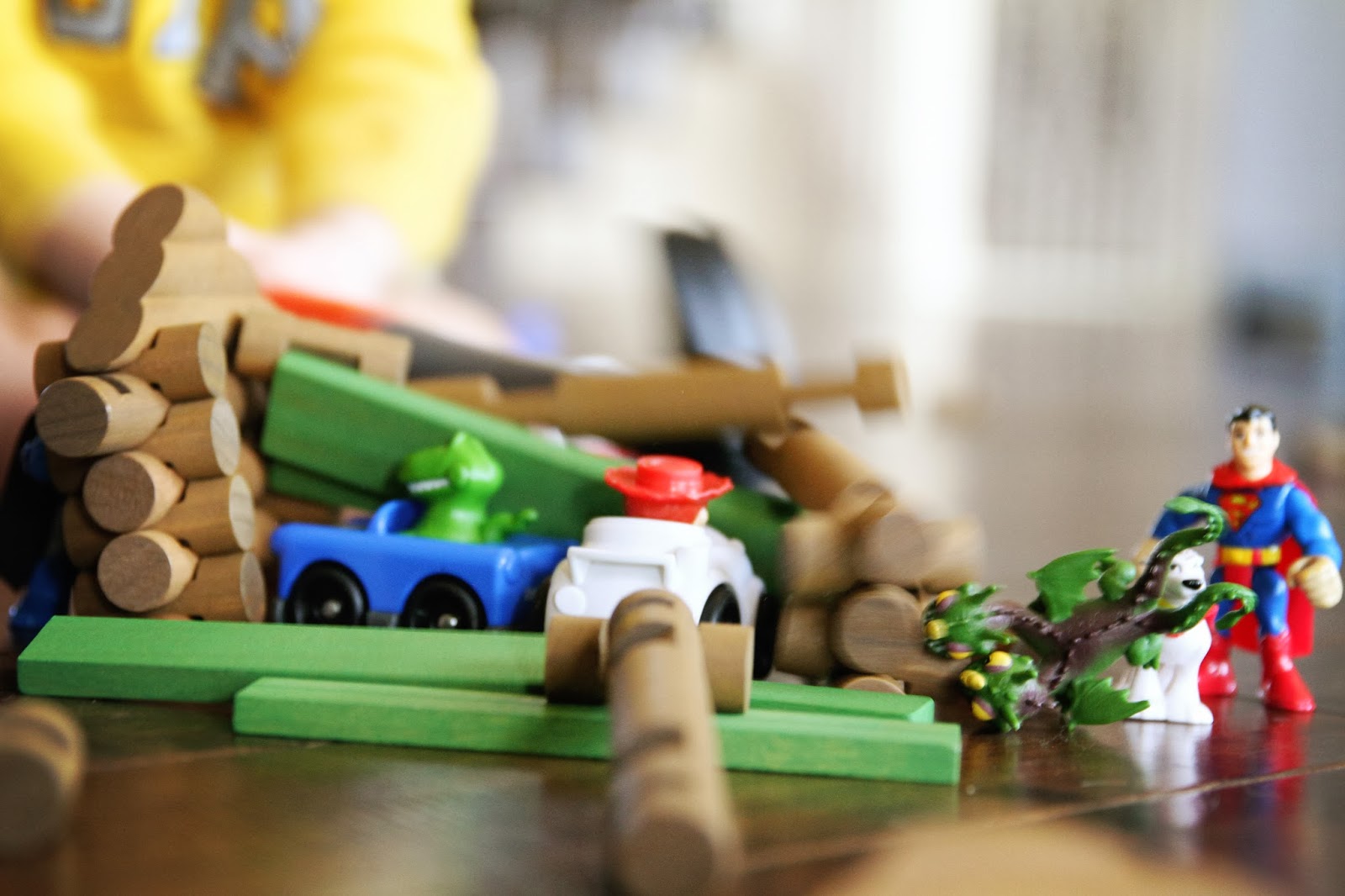 And it only lasted 45 minutes because before Justin and I knew it, the fevers came back and they were both asleep on the couch waiting for the tylenol to kick back in. But it wasn't the last time we would sit here on the dining room floor building houses, each and every day they have asked me to build them a house. & of course they have Wreck It Ralph and the hammer in hand ready to be the destructive boys they are. I am sure playing princess dress up is great but I think I might be a little bias to Superheroes, Lincoln Logs, and playing bad guys---speaking of bad guys, that is what Logan wants for his birthday party. A bad guys birthday party. & by george, that is what he shall have.
Posted by Kayla South at 10:35 PM