I was hoping to be able to post about the boys waking up on Christmas morning before now but the boys have been sick since Saturday & if they haven't been curled up on Justin or I's lap then we have been trying to get the house back in order for when life returns to some sort of normalcy.

Today has been a little better--after a long fever spell, Logan now has pink eye and has successfully passed his sickness to his brother but neither have had a fever since 5 am so we are keeping our fingers crossed it has exited our house once and for all.

But back to Christmas morning…

The boys went down fairly easily on Tuesday evening because they knew the faster they fell asleep the faster a certain someone could make his appearance. 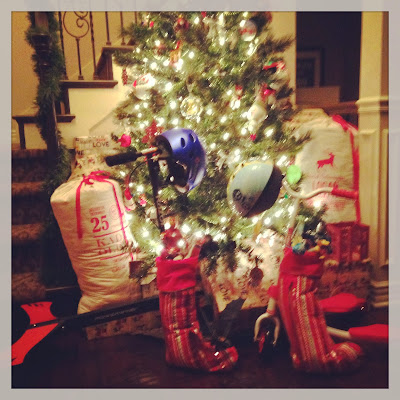 And an appearance he made. The boys woke up about 7 o'clock & were so anxious to go downstairs but Justin and I were able to hold them off for a little while longer while we got changed and got the kids in their robes that our Elf, Fishlegs, had given them the day before. Kaden looked just like Kevin from Home Alone walking down the stairs that morning & not far behind Logan was doing his best to keep up.

They were smiling from ear to ear when they saw what Santa had left for them. I do believe we heard "this is AWESOME mom & dad." followed by a little tiny voice "awesome."

They boys both received new scooters and new bike helmets to be used outside as soon as the weather warms up. & lucky for them we have a pretty good space inside for them to try the new toys out.

Logan got the Y Flicker J2 Junior Scooter. This particular scooter allows him to just WIGGLE and the scooter will do the rest of the work. He can also use it as a normal scooter but he will be able to go a little faster by just wiggling back and forth. & after Kaden realized that Logan's worked with just a little WIGGLE, he started wiggling on his too. We were sure he was going to be disappointed that his didn't do the same but thankfully it did or they both would have been fighting over Logan's little red scooter. & even though in no time at all, Kaden became a master at his scooter & I am pretty sure we will need to stock up on bandaids and cold packs come springtime.


& you see those helmets--safety is not an accident around this house--they would NOT take them off while they opened the rest of their presents. Kaden's highlights were Doc McStuffins' "heartbeat checker",  his new Spiderman rolling backpack (for our trip to St. Maarten) & the Spiderman sleeping bag--went a little crazy at PBK. Logan's highlights, a broom & dustpan, Batman rolling backpack & Batman sleeping bag.

But the most unlikely hit was what was tucked deep inside their stockings--no it wasn't the How To Train Your Dragon characters or the super cool spinning toothbrushes, no it was underwear & socks. Don't get me wrong, the underwear are pretty cute and the socks are days of the weeks socks but seriously boys... 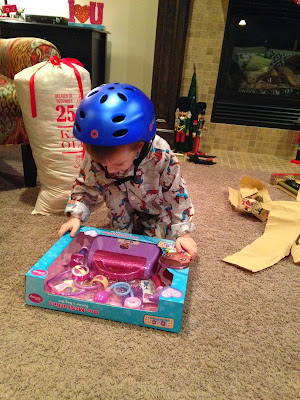 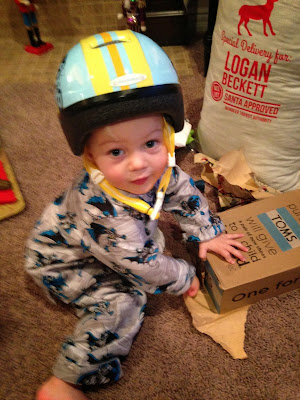 & I know, I should have WAY more pictures than what I have from Christmas morning but I really tried to put the camera down (which I did, used my phone) & enjoy Christmas morning with my boys. It goes along with this new being more present, enjoying our boys & our little family more. It was truly a wonderful morning at the South house & the boys haven't slept a night or taken a nap for that matter without their new sleeping bags. & those helmets, well they have finally taken them off & are only wearing them about 80% of the time.