The Biggest Tree EVER

Everyone is always talking about how magical Crown Center is over the holidays and it was about time we checked it out too. Our initial plans were to go last Saturday, the 21st but a little snow/freezing rain kind of got in our way. With only days left before Christmas & very few nights open, Becky & I loaded up the boys and headed out to see the "biggest Christmas Tree EVER".

& of course we would leave it till the 23rd so of course that meant it would be the COLDEST night of the year yet & the weatherman kept his word. We got there just as it was getting dark, found a great parking spot, only to be told it was private parking and that I would have to move my Yukon.  & For the record, I still hold my ground on the fact I was not parked on private property & this "valet attendant" was just lazy.

We had decided that since it was dinner time that we would just treat the boys to dinner at Fritz's, they love the trains & since we have one 4 year old that doesn't recognize his own inside voice, it makes for a pretty good spot. Only issue, the line was winding around and around. They kids probably would have done just fine waiting but I wasn't even wanting to attempt it so we settled for D'Bronx which ended up being a WAY better choice. The boys devoured their pizzas and cheese bread in no time. 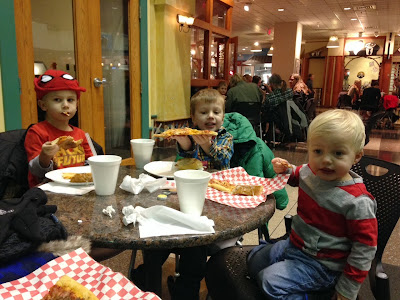 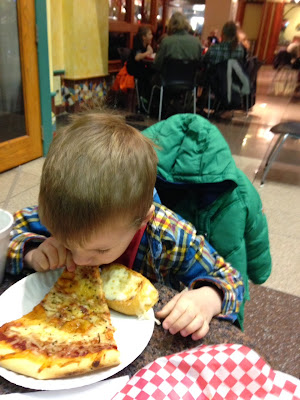 We had one of the best seats in the house--right across from the "Biggest tree EVER" & honestly, we contemplated standing the boys up in front of the glass and taking their picture and calling it a night but what kind of moms would we be…

So we bundled the kids up from head to toe and took off on the freezing 30 yard walk to the tree. The boys, were so excited. But not because of the tree but because of the SNOW that was on the ground. We did a little bribing to get them to "cooperate" for a few pictures and then we turned them loose for what seemed like 30 minutes but in reality was only about 3 minutes long. They ran through & checked out each of the houses in the holiday village & finally were ready to go when they weren't able to feel their noses! 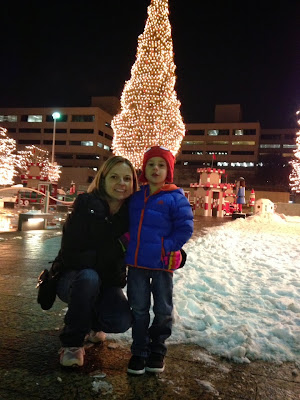 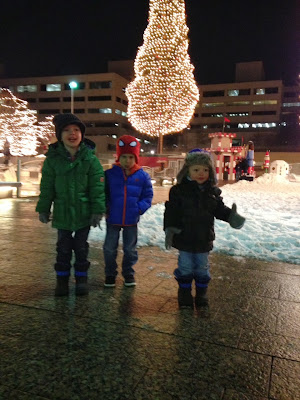 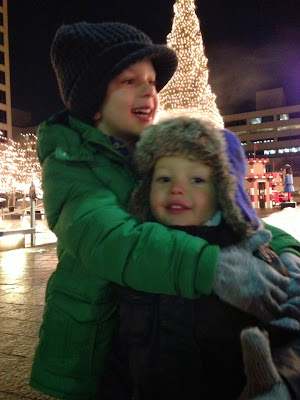 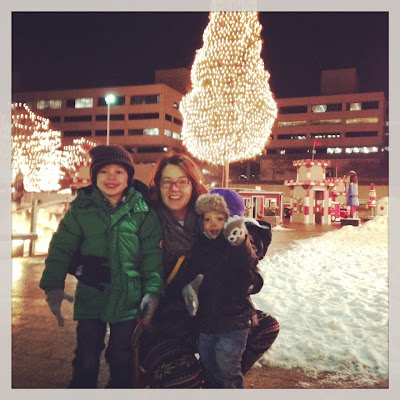 Once in the car we announced that we had one last surprise for them---we had some special "trains" to show them & drove over to Union Station. We were hoping that there were a couple trains outside lit up so that we could just do a drive by but when we pulled up, it was as dark as it could be--we had a few bummed kiddos so we hatched a back-up plan & went on the search for some neighborhood Christmas lights.

20 minutes later, a few wrong turns & detours and we found exactly what we were looking for, only problem---the boys were a little less than excited. They seriously were over our Christmas Lights outing  & asking to go home. Crown Center Magical? It certainly was for Becky & I but maybe next year we will have to do our Christmas Tree/Lights Tour a few weeks earlier when hopefully it isn't as cold out.
Posted by Kayla South at 3:24 PM