Kaden started pre-school back in November (which I just remembered I haven't blogged about!) & luckily we were able to get him into a pre-school near my work & one that is also really close to our daycare provider. The best part about this pre-school, Kaden's Grammy teaches there & he loves knowing that she is close by, as do we!

Each Friday he brings a folder home with updates and announcements--the first of which announced this year's Christmas program and the pre-school group would be kicking off the entire show. To say I was a little nervous when I saw the songs he needed to learn was an understatement--I mean the kid only goes twice a week for 3 hours--how much could he really learn & memorize?

So for the next month we worked here and there on the songs but I was keeping my fingers crossed that he was doing a lot of practice at school. Each day as I picked him up I would ask if he had learned any songs and his answer was always a big NO! Oh dear.

Last week we got an announcement about a run through practice the afternoon before (last night) which meant that he would have to miss nap time BUT he would get to go to school on one of his off days--so of course he was thrilled. Justin fortunately was able to take him to his practice and when he reported back, it wasn't the best. Kaden made it through the first song perfectly & then lost it on the second song. Cried through the whole thing, didn't move, just cried. & every time Kaden told me about his practice, he started it off with "I cried Mommy."

So what would today bring? We started the day off letting him know just how excited we were for his program tonight and that we couldn't wait to watch him sing with all his friends. We had plans to dinner before and then off to the program we went. 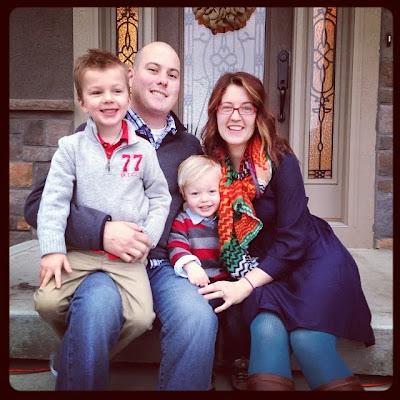 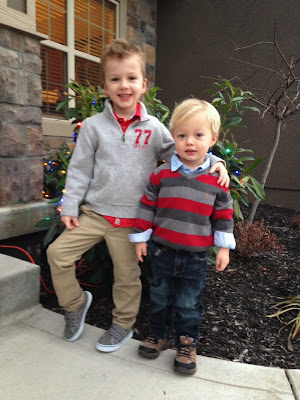 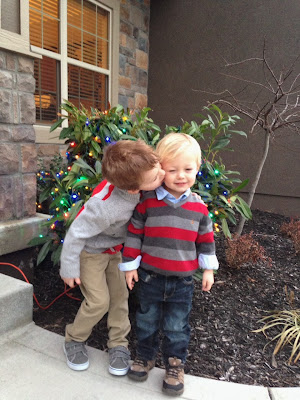 When we arrived at the church he was so excited to show us where he was suppose to go. He walked right up to his teachers and sat down and waited. A few times he would turn around and make sure we were still there and wave or reach for us but with a little "its about to start" he would turn back around. Right as the program is starting he looks at Justin and I & announces he has to go to the bathroom, "I need to poop."

That's our Kaden! Justin ran him to the bathroom & I am doing everything I can to think about how I can stall this program. Can I stand up, fall, and act like a broke my ankle? Could I trip over the piano and send all the music flying in a million directions so that it takes them a few more minutes to get everything put back together? And as I am contemplating the best stall technique the kids started to take the stage, where was Kaden? He was NOT going to miss his first performance due to poor potty planning on our part!

Finally as the last few kiddos were finding their place, Kaden came charging through the crowd of pre-school parents, "excuse me. excuse me." & finally made it to his place on stage just in the nick of time. Whew, crisis averted.

How awesome are these little kiddos?!? They nailed it and Justin and I couldn't have been prouder. He did such an awesome job. And I won't lie, I kind of chuckled when my friend Korie said she teared up when she watched her daughters' first program but I get it now! I saw Kaden up there singing his songs and doing all his hand motions and I too started to get teary. When did my little man get to be so big?!?! I hope he knows just how proud he made us tonight and how much we LOVE him. All I wanted to do was stand up and shout "way to go buddy!" but I refrained myself and just gave him a big thumbs up with the biggest smile I could manage. I think get got my message.

After his performance he followed his friends off the stage and took his seat where he sat for the rest of the program, not even coming back to his mom & dad. Not digging this my-baby-is-growing-up-too-fast-feeling!
Posted by Kayla South at 10:27 PM