I have seen a number of people post pictures of their families making gingerbread houses over the last few weeks & decided that this year would be the perfect year to start that tradition with our boys as well. And why not make it a party too! A few texts later & we had the afternoon planned-the mommies & the kids would make gingerbread houses as the daddies watched the Chiefs play.

But first--the kids had to nap. When they woke the would wake to all the fixings they would need to make their masterpiece. & a few extra treats--Tiffany's homemade chocolate chip cookies and a tall glass of milk. 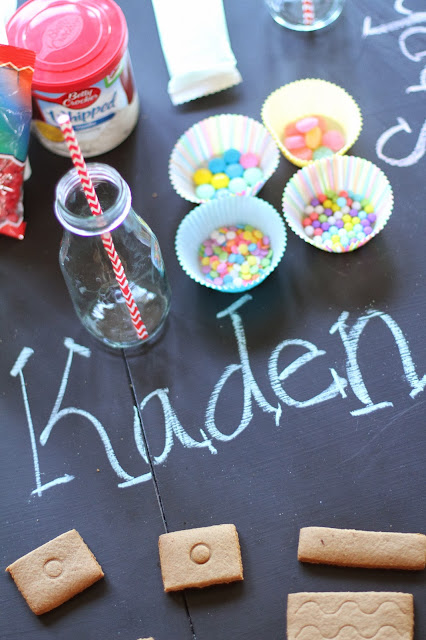 The houses were a little harder to put together than what we anticipated but with a little extra icing we got the job done. Logan was first up--needed to keep the little guy occupied & waiting & two year olds don't always mix. 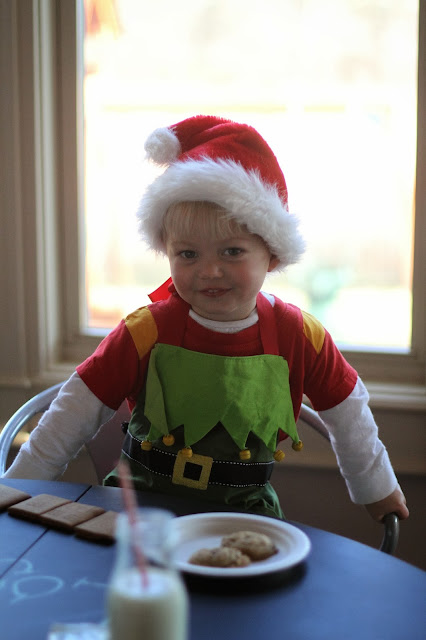 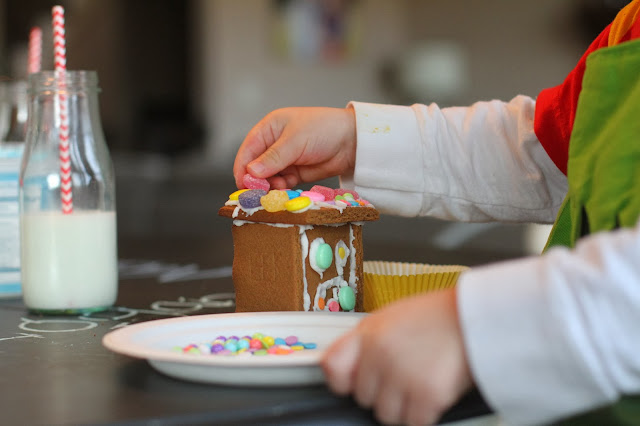 He covered every inch of icing with his candies & when he was done he sadly said, "aww, no more spots!" & gave us a pretty good puppy dog face--so we added more icing & gave him more candies. he was good to go, for at least another ten minutes. Pretty sure for every one piece of candy Logan stuck on the house, he dropped two more on the floor.

We then moved onto Nathan, who had been running around while we got Logan all up and running. Nathan's was the "easiest" of the gingerbread village or at least that is what we were thinking it would be. For some reason, we had the most difficult time getting it to stand up and in the end, it didn't really make it. He did get to decorate it before it met its demise though. 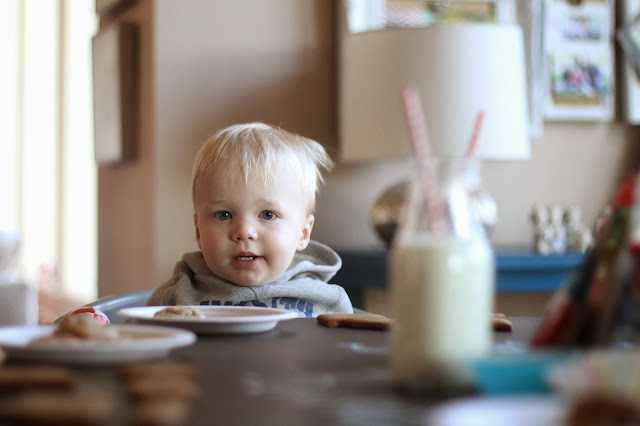 Now Sophie & Kaden were troopers as they had to wait for both of the little ones to get started before we made it over to them. They also probably enjoyed it more & I felt kind of bad that I just had a measly little house for them to get crafty on. Sophie's gingerbread house had some major renovations--halfway through we decided to pull it apart & add some additional icing for stickiness. Round two was much better---we had a house that was standing tall. 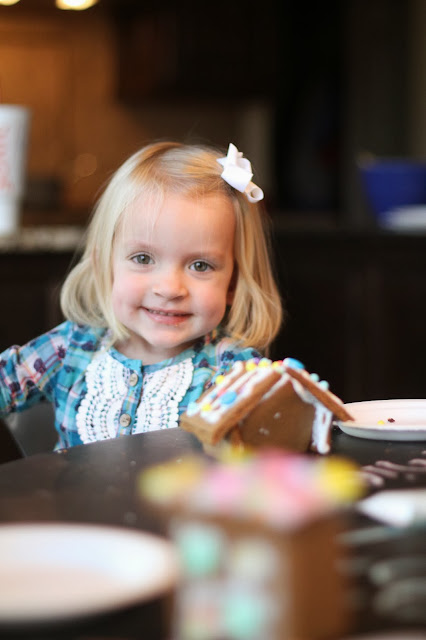 With each kiddo their concentration grew. Sophie was all about her gingerbread house but so was Kaden. & for a kid who doesn't really sit still, especially with not being able to go outside and burn off any extra energy, that was something. He sat there for the next 30 minutes helping me build the house & then decorating it. & just as he was getting ready to declare that he was done, he found the back of the house bare & we went back for more icing. 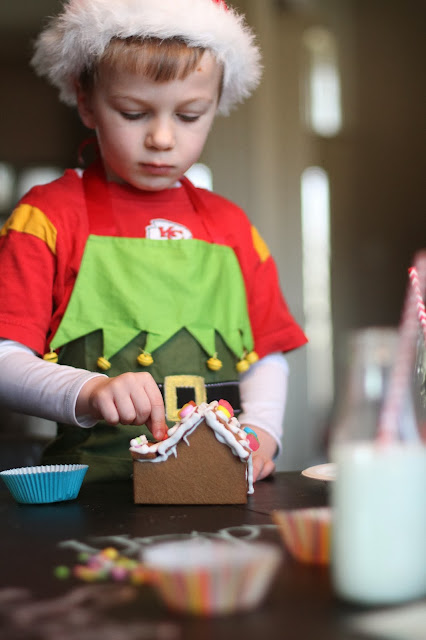 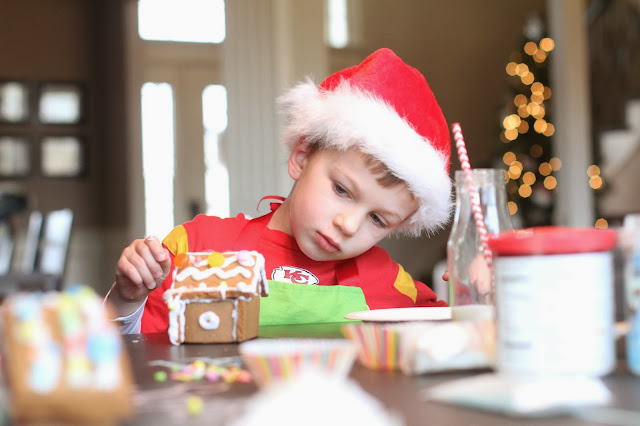 They may not be the most beautiful houses on the street or the village in this case but they couldn't look better in my eyes. And we can consider this our trial-run, headed back to get another tomorrow so we can take it home to my mom & dad's for the holidays. Hopefully they are just as into them then as they were today. 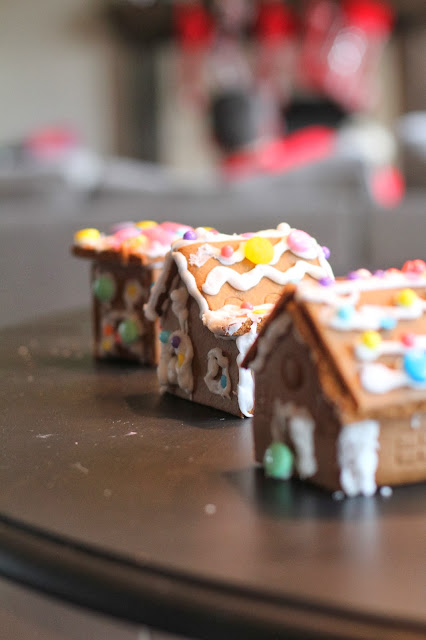 See. Beautiful. They look so good you can almost taste it or at least Kaden can! 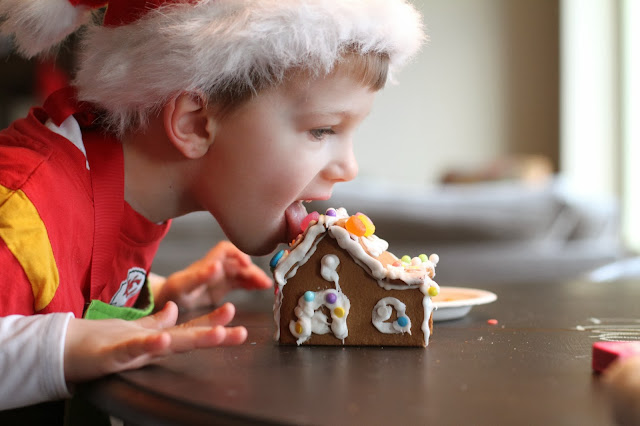