Thats the Last Time I Do THAT

You live and you learn & boy did I learn something this Halloween.

Our boys really could care less about what their costumes look like. They were perfectly content just being able to dress up, whatever it may be, and chase each other around the house. So I am done with spending lots of extra time and effort on costumes and next year, they can just pick out whatever they want or wear one of the 10 costumes I purchased in the days following Halloween.

But lets go back to the beginning, the part where I had this glorious idea of being SUPERMOM & creating these OH-SO-CUTE-I-WANT-TO-PINCH-THEIR-CHEEKS-COSTUMES.

After Kaden's Teenage Mutant Ninja Turtle birthday party I just assumed that he would want to be Raphael, after all that is his favorite turtle and he LOVES the color red. Not to mention, we had the costume already. All I had to do was worry about Logan's costume. But then I saw the cutest Facebook profile picture of a client's little man as Mr. Fredrickson from UP & it was over--I got sucked in. As soon as I saw that picture I remembered that I had posted another image on Pinterest earlier in the year and so I Pinterested (yes that's a word) again looking for other versions of Mr. Fredrickson, I found Russell. Which of course meant that it was all meant to be because the boys love the movie, UP, & they could go as a duo. Sure it wasn't Batman and Robin or Leo & Raph but it was a Duo & one I just had to try and pull off.

Over the coming weeks I scoured website after website, made trip after trip to Home Depot and to Hobby Lobby. As each piece of clothing or prop arrived, I sat it aside and watched as my dining room table ceased to exist. It was crazy-I admit it. But I was still super excited about the whole idea. Even more exciting was that Kaden was totally okay with being Russell, he talked about it and was totally on board when I suggested the idea---plus I told him that Daddy was a boy scout when he was little and he would get to wear his old sash as part of his costume.

That was until we weren't able to find it. Grammy Janet found his scarves & a few hats but NO SASH. The sash is what MAKES the costume. Its where the Grape Soda Pop pin is placed. It has all the scout badges on it. We had to find it or at least ONE.

& I did, for around $50 and then I had to spending an additional $20 for shipping & that's when I decided, Kaden didn't know the difference, only I would (and all of you now) but it wasn't worth the money for a mere 3 hours.

In the end it all worked out great. Justin helped me build Logan a cane from PVC piping and spray painted it silver before adding the tennis balls to the bottoms of each leg. We bought a super cheap back pack and poked holes in it to hold all the camping supplies a Wilderness Explorer would need. I cut out the Wilderness Explorer emblem and placed it on a hat, his shirt and a flag. We found the perfect velvet coat with corduroy pants for Logan & found the exact Grape Soda Pop pin that both Logan and Kaden wore. And even though Kaden didn't get to wear his dad's sash, he wore his dad's scarf/handkerchief which in the end, worked perfectly. The finishing touches were a few balloons attached to each boy. Costumes complete. My favorite part of the costumes though, were the drawn on glasses that Logan sported. I think we can all agree that the kid looked ridiculously cute. 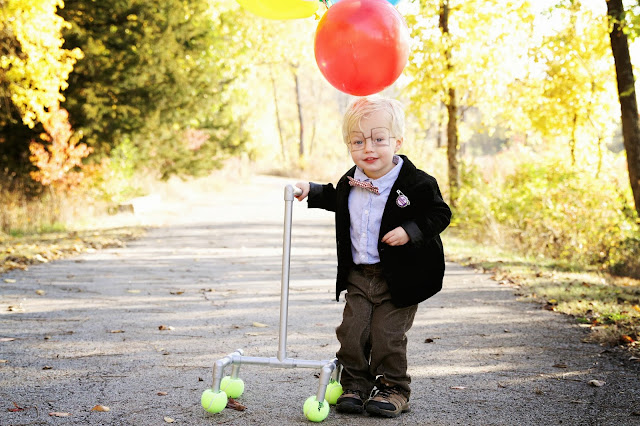 They both looked cute & I was super stoked with how it all turned out. They even humored me with a quick photoshoot prior to Trick-or-Treating (later I realized that I forgot my memory card in my camera but luckily snapped a few with my phone too). 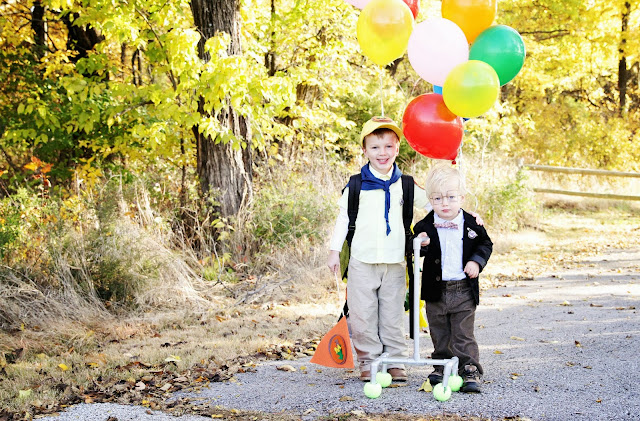 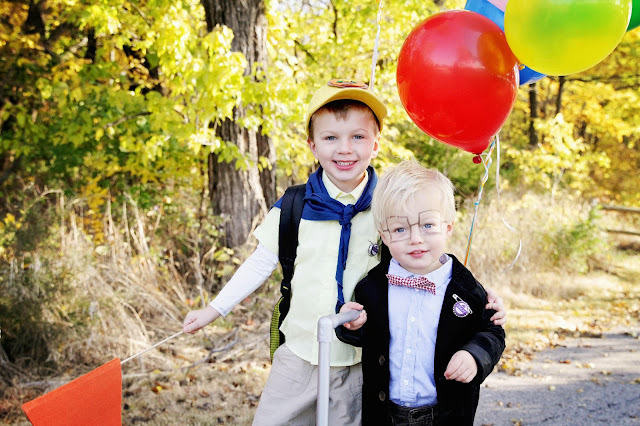 It was then off to the show, so to speak--We have a nice little quiet neighborhood, not too many houses, not too few of houses, just perfect. We sat off and started at the other end of the neighborhood to work our way back to our street, leaving our immediate neighbors for last. At each house Kaden would run up and knock, Logan would quietly follow and with a big, proud voice Kaden would say,

followed by a much quieter "Twik-or-Tweet" from Logan.

The houses without kids really didn't know who they were but that was okay, Kaden told them exactly who they were.

"I'm Russell and Logan is Captain, I mean, Mr. Fredrickson. We're from the movie UP." 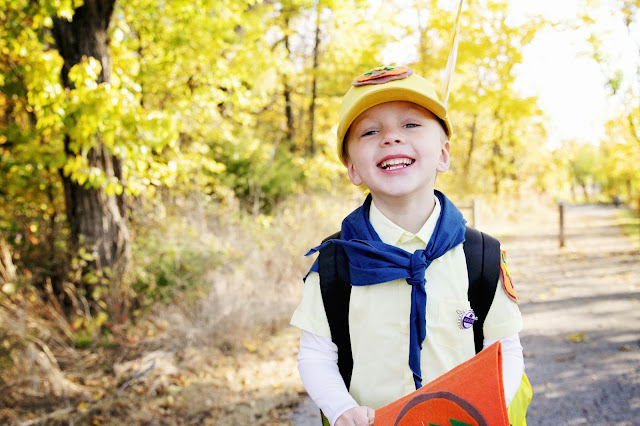 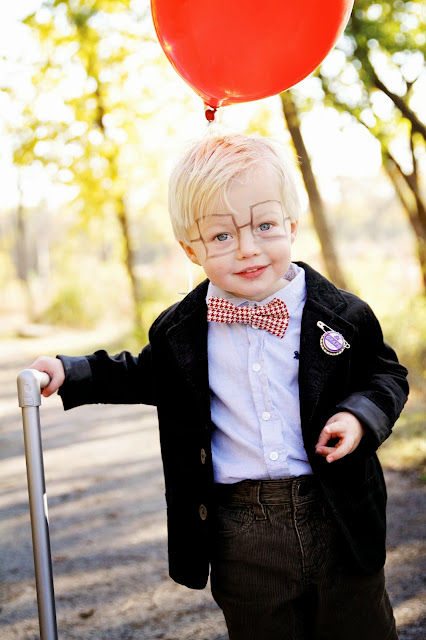 Smiles instantly spread across the homeowners and my faces. How did my lil' man get to be so big? They each opened up their candy bags and watched as each person dropped a few pieces into their bag. Before turning and heading onto the next house Kaden thanked them & wished them a Happy Halloween. The boys were on a roll and were doing good until we ran into a little dog that came running outside to great the boys and for some reason, Kaden freaked. He was done. He was over it. We decided to make our way back to our house but as we got closer and he saw more kids heading out, he kind of got a second wind but refused to put on his backpack and balloons though. & it wasn't worth the fight to get him to wear them so I just decide not to even go there. & you know, I think they enjoyed handing out candy as much as they did receiving it, which was fine by me. 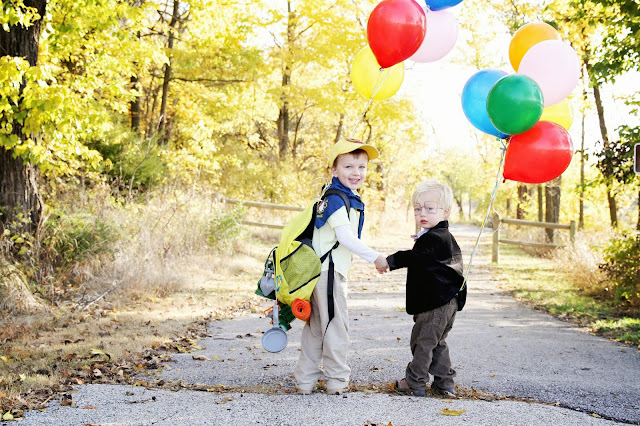 All in all, it was a good Halloween. Sucked that I didn't have my memory card but that didn't stop me from making them dress up again and going back out for another shoot. & this time we had Grandma Sara there to help. Plus I may have promised a trip to Walmart & while there, we hit the jackpot on discounted costumes. We picked up a cow, a batman mask and a transformer. A few days later while at Target I saw 70% off and picked up a dinosaur, Mike & Sully, a cowboy, two planes, and a ninja. The cowboy hat hasn't left Kaden's head and plus, who said dress-up was only for girls. 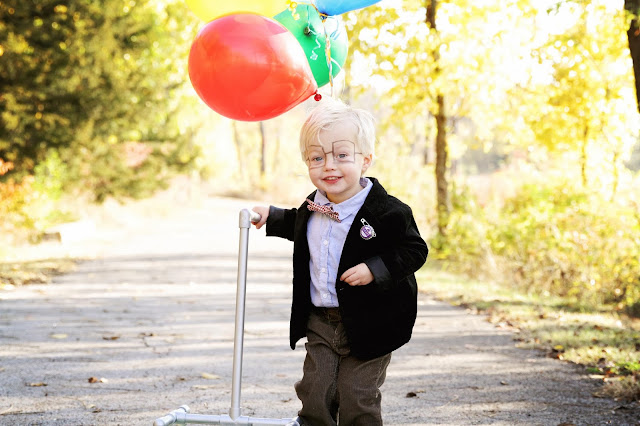 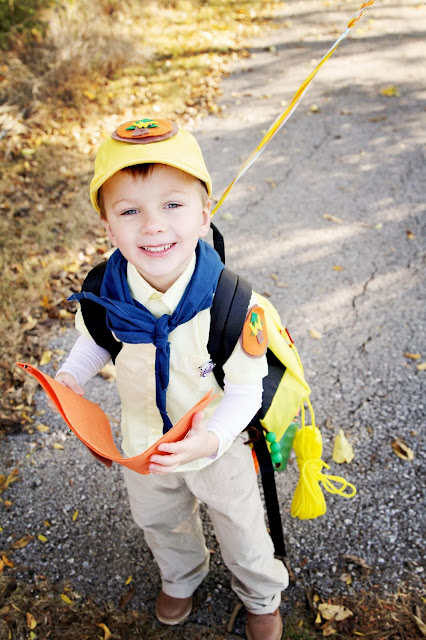 And even though I immensely enjoyed creating the boys' costumes this year and they were sooooo flipping adorable, I know we don't have to go to all that trouble to make the boys' happy or to show them how much we love them. They don't judge my love on how much effort I put into a costume and neither should I. They smiled just as much, if not more, as they ran around the house in a green dinosaur and a cowboy hat accompanied by only underwear. So next year, I'll let them pick out their costumes (as long as they are fully clothed) & I'll sit back and watch as they climb higher and higher on the good ole' Halloween sugar high. 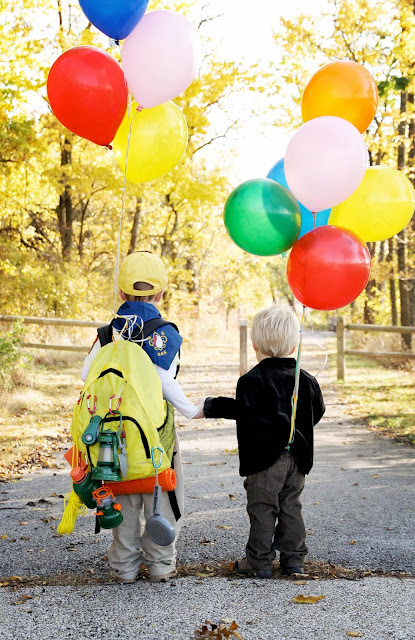 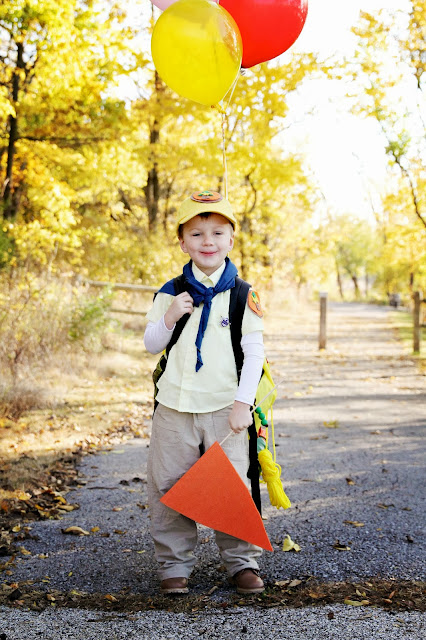 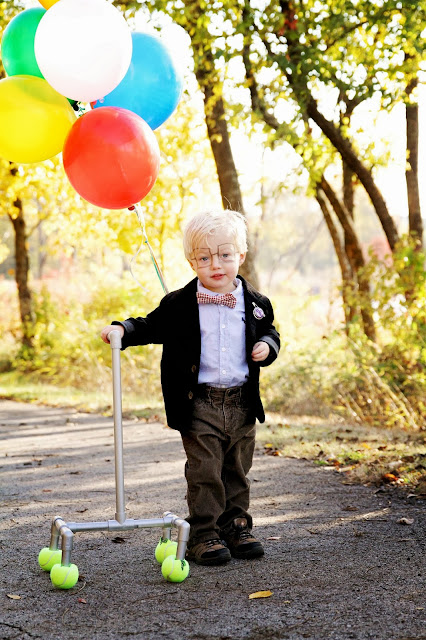 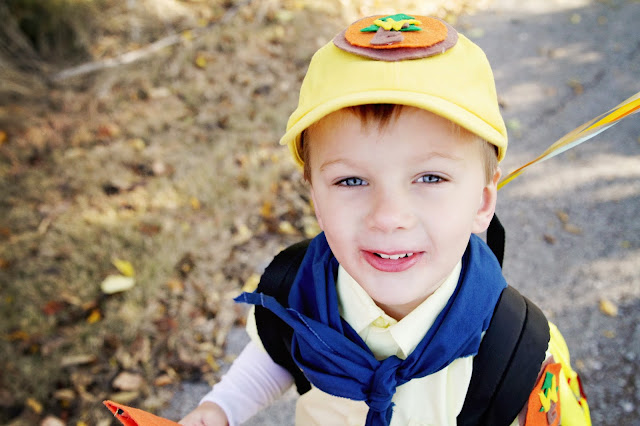