My husband is a HUGE Mizzou fan. Neither of us went to MU or even went to a university in Missouri for that matter but none-the-less he is a fan. I wouldn't say he bleeds black & gold but its pretty close. & you know it has worked out pretty well for me. My dad has always been a MU fan (I am at least from Missouri) so when I met one of the only MU fans at Pitt State (GOOOOOOO-rillas), he was pretty happy. Not sure what he would have done had I brought home a KU fan... 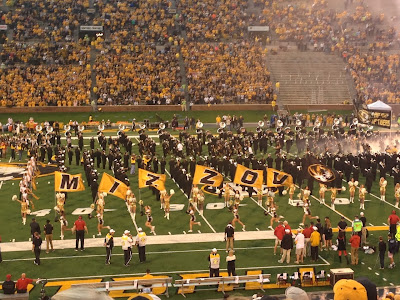 About once or twice a year Justin and I attend some sort of sporting event in Columbia (we enjoy more than just basketball--ehhh hmmmm). We actually got engaged on my 25th birthday after watching MU and KU play basketball. So although we didn't attend school there, we still have memories that were made there. & this last month we got to add to those memories--we took our boys to their first MU football game.

Justin's Aunt Barbara & Uncle Charlie live outside of Columbia and have basketball and football tickets. They emailed Justin one day to let him know they would be heading out of town and wanted to know if we would like their tickets to the game. Justin jumped at the chance to the take the boys--I was a little worried about it. But since we only needed 3 tickets for Justin, me and the boys, Janet came along too--I was happy to have a little extra help. This wasn't like going back to my hometown where the boys could just run around and play, they would have to sit still for 2.5-3 hours. Could they handle that? Better yet, could I handle that? 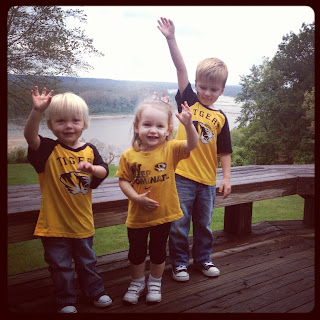 We made it down to Columbia around lunch time to have lunch with Barbara and Charlie before they took off and then we put the kids down for a nap before we loaded up and headed into the game. & as a special treat, our friends Chris and Becky met up with us with their daughter Kiley. So the boys and someone else to play with and help pass the time. 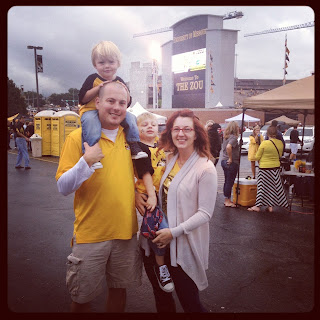 The weather wasn't the greatest--it was kind of spitting rain all night but at least it was FREEZING cold. The first quarter was some what of a challenge but by the end of the first half the boys were finding their groove and really starting to enjoy themselves. They loved being able to do the MIZ- ZOU cheer. They loved looking for Truman the Tiger. They loved when the canon went off after each touchdown. But most of all they LOVED the cool smoke and fog that came out when the players ran out onto the field for the first time. Sure we had to buy a lot of food & popcorn to keep them entertained. I played countless games of I Spy with them but all in all, they did pretty darn good. Hopefully this is another tradition that we can start with the boys & something they can look back on and smile about. 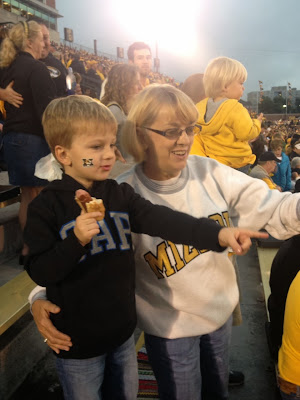 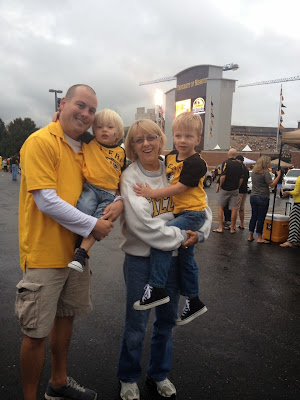 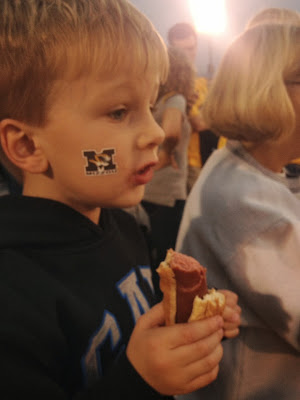 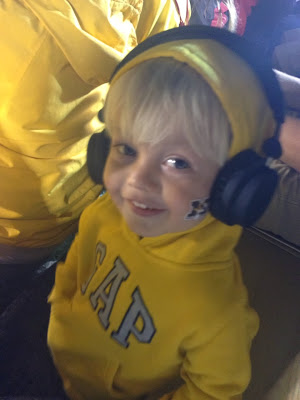 Thank you Barbara and Charlie! Because of you, three of my boys had permanent smiles on their faces that evening.
Posted by Kayla South at 9:33 AM