Black & Orange. Two colors that are more than just colors. These colors represent going home. They represent a small town that gathers around the football field on a Friday night to watch the varsity team take on the rival town down the road. These colors represent a long history of pride, support & achievement. These colors can make you feel at peace--or at least they can for me. & although I know my boys will not grow up wearing THE black & orange, I still want them to have an idea of what those colors mean to their mommy. 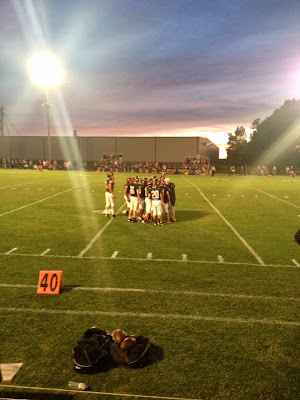 A few weeks back the boys & I made the trip back to SWMO to see my parents. We hadn't been home in a few months and it was my mom's birthday so it was time. Not only was it my mom's birthday but it was also Jasper Appreciation days in my hometown. (You may remember that Logan took home first place in his division last year at the baby show--and if you don't, he did. You can read about it here.) It would be a weekend full of hometown adventures, just want I needed & my mom too. Oh and did I mention that my dad was celebrating his 40th high school reunion. Talk about OLD! & I love that he didn't really graduate from Jasper, he graduated from a school in Ohio, but that he still gets invited and attends everything as though he did. I mean, he did go to school with these guys for most of his school years, it just happened that he moved during his high school years. 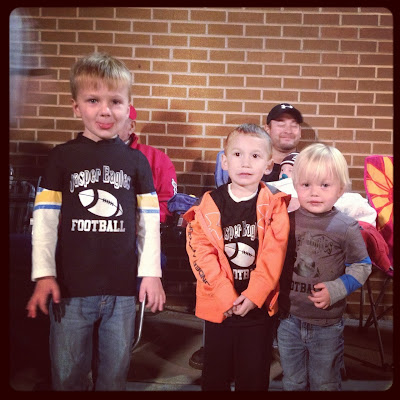 So Friday night he knew there would be a lot of his old classmates in town for the game since they would be getting together the night before so we headed off to the game as well. My best friend from high school had a few shirts made for the boys (they had to be in JASPER gear) & I wore my mom's retro cheerleader sweater, it was sweet. As I walked up to the field I could see all the things that had changed since I had last been to a game (9 years maybe)--they had moved the scoreboard to the other end of the field, they added a sidewalk, a new HUGE building, the playground was all different and fenced in, they had changed the entrance spot, and added a fence to the stands. So much had changed but the feeling, it was all still there. The feeling of EAGLE pride. I didn't know many of the kids that were playing except for maybe the quarterback and the running back (my best friend's nephew) but that didn't matter--we jumped right in and started cheering along with the loudest and proudest moms and grandmas. It was kind of weird being on that side of the "ball". I was always the one playing, the one being cheered on but here I was, 13 years out of high school, cheering our boys to a victory. & here I was with my two boys looking on in amazement, knowing that all too soon it will be them out there and I will be one of those moms who will be beaming with so much excitement and pride, their biggest fan. 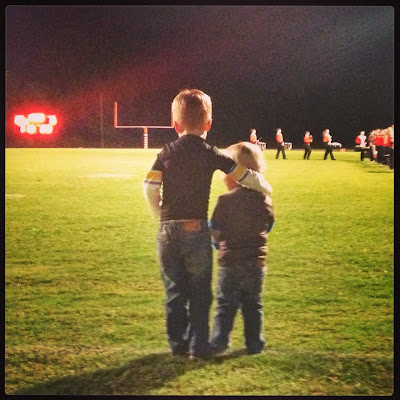 The next morning we were up & out of the house early. We had to be at the Jasper baby show by 9 because even though I didn't have any babies to enter this year I did have one VERY cute niece that would be vying for the title. Sadly, she didn't win so of course that means something was rigged! & as soon as her division was over we were out of there. We headed to downtown Jasper (you can walk the entire town--its pretty small) and enjoyed the festivities. Mom & I had ran into one of my classmates mom's the night before and she was going to be selling cotton candy so of course we HAD to stop by her tent. The boys got to pick out their flavors & their smiles grew with each turn of the wand. They were in SUGAR heaven. Before we were headed home they had successfully polished off a hot dog & then some snow cones--which were so delicious my sister, Brett & I had to go back for one ourselves. We ended the afternoon with the kid games--they bounced, flipped, & raced their way to the finish lines. 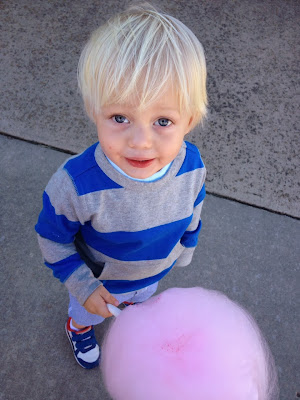 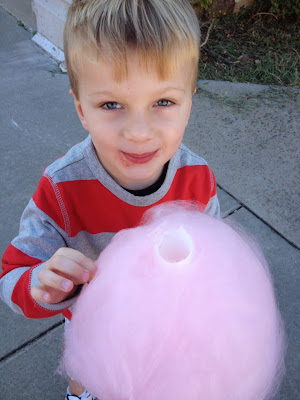 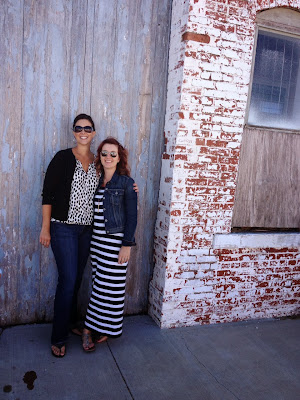 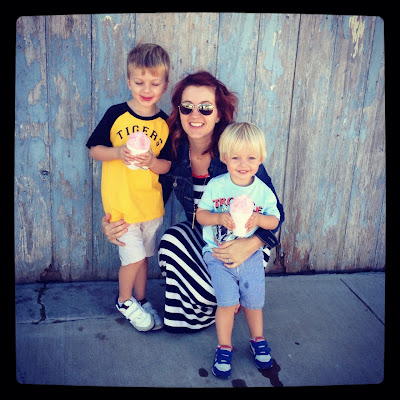 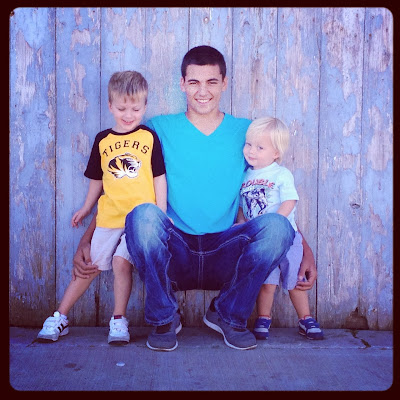 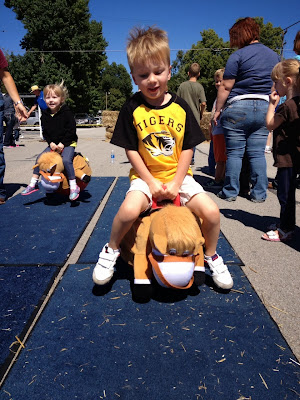 Finally it was time to head back to the house for naps--which were needed by all. & as I look back at our adventures from the football game & Jasper Appreciation days I think of all the smiles. Not only the smiles that Kaden and Logan had on their faces but the smiles they put on everyone else's faces. Every person they came into contact with they made smile-whether they were just sitting back watching the boys chase each other around-Logan repeating everything he saw Kaden doing. Or maybe something cute or funny they said--you never know what is going to come out of their mouths--we were all smiles.  But my favorite thing Kaden did--he walked right into Terry & Chub's house after walking right up to Terry and giving her a great big hug. He didn't know Terry. All he knew is that Papa Tom said we were parking at her house and when we got out of the car Papa Tom gave her a big wave with a big hello. That was all Kaden needed to hear. He ran right up to her, walked right into her house and was ready to play. Again, it was like that when we were growing up. You always knew Terry had an open door and you were welcomed there at any time. Its nice to see that my kids still feel the same way & that there are still so many things that remain the same from my hometown.

The fun didn't stop there. That evening my Cousin Casey came over with her husband and little girl, Gracey Jo. Gracey and Logan are only a few weeks apart in age so it was pretty special to see them playing together & chasing after Kaden as Maddie followed closely behind. Casey Jo and Ben were in town to pick up the crib. You remember the crib that we took down and moved out of the house, well its going to be used by my cousin for her little boy!!! I knew taking it down would be the right move and I am so excited that it will live to see another baby--and one in our family. Who knows, maybe it will make its way back to our house some day in the future. 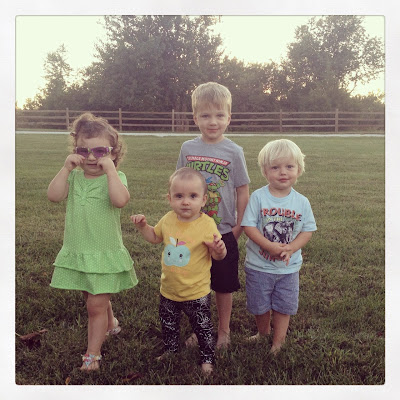 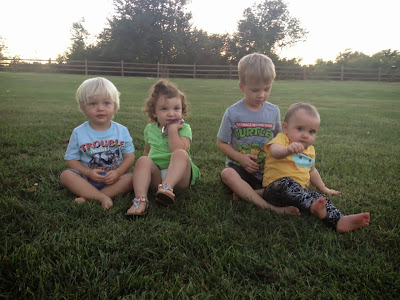 This weekend that we spent at home makes me realize just how lucky I am to have the family I have. I don't get to see them as nearly as often as I would like but when we are together, we can pick up conversations as if no time has been missed. & maybe its the same for anyone else that has moved away from home but going HOME, is relaxing, its easy and its so good for the soul. I only hope that when my boys are grown and have families of their own that they will feel the same way about coming home to their daddy and I. They think they are spoiled now, they should wait until they get older, I am sure I will be begging to do their laundry, make them dinner (or ask their father too), change their kiddos diapers, take them to church with me while they go and pursue their hobby/dream. I hope they will always look forward to coming home & not as though its a chore and they HAVE to see me because that is FAR from what I feel now. I WANT to go home and I WANT to spend time with my family & I LET my mom & dad take care of not only me but of their grandkids too. It might sound selfish that I let my mom & dad take care of me and my kids but I know that makes them happy too & they wouldn't want it any other way.