We Took It Down.

Last night we broke the crib down & we are shipping it off to a dear cousin for her to use. I was dreading this moment. Honestly, I thought I would cry as I removed the bumper. The mattress. All his toys & the screws. But I didn't.

I thought it would weigh a hundred pounds as I moved it out of Logie's room into the spare bedroom where it will sit until my parents come to get it. But it didn't.

This is the crib that both my boys used for the first 2 or so years of their lives. It was the last thing to be broken down at the old house and the first thing to be put together when we moved into this house. Its where I go, well went, most mornings to a find a little boy sitting there looking at me with his arms reaching up asking "out?", "downstairs?".

Its hard to believe that this crib may never be put back together and used in this house again. Part of me is heartbroken at the thought of that but the other half of me feels somewhat lighter. We have been having the conversation about having another baby or at least not closing the door on having another but we just go in circles with it. We actually started making a pro & con list--& yes, I know how horrible that sounds but we did, not on paper but in our heads. I won't go through all the pros & cons but I will say, we decided to at least have this conversation again about this time next year…

But lets go back to the bed situation, we can't vary well take away Logie's crib & not give him something else-enter Craigslist, a can of green paint & some elbow grease. I knew I wanted a Jenny Lind bed but was not about to pay the Land of Nod price tag to get one & luckily I found a pair of twin  beds online for CHEAP. The big, master plan is to have two twin beds in his room so that the boys can have sleep overs but until I can get another bed painted, we went with just one. Don't kid yourself, I bought two of all the bedding just in case I don't get around to it for a few months, certainly didn't want the cute whale sheets going out of stock. Oh and his real sheets, well they are some what on back order and will be here in just a few weeks.

Apologies for the iPhone pictures---figured I would wait until I get the room more pulled together for real photos. 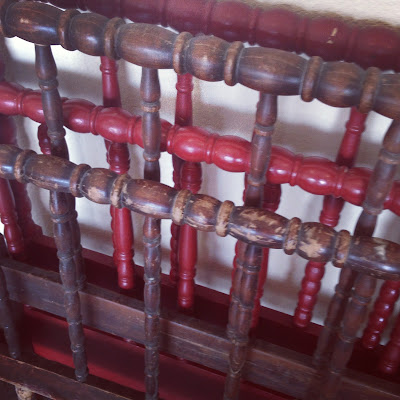 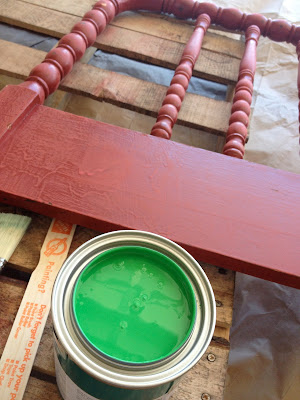 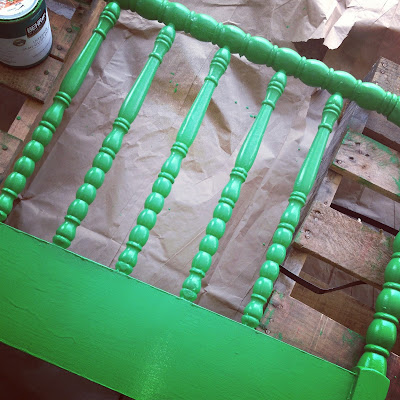 It took us three attempts to get it to this point. The first time we thought we might make the move was a few weeks ago. I went up to his room, pulled the rails out, put the rails in place and then pulled over the mattress that we had in the spare bedroom. And when I went to put it in place it fell straight to the floor. The mattress was slightly thinner than the rails. UGH. On the positive side, I was smart enough to test the bed out before taking the crib down.

So it would just sit there on the floor. I removed one of the rails so that it wouldn't hurt anyone & proceeded to make his bed.

The final attempt came tonight. After realizing the box springs weren't going to cut it, I texted my brother-in-law and asked if he could cut us some slats. & today when we arrived home there were 6 perfect slats sitting on our porch. The boys and I went upstairs, pulled the bed apart and crossed our fingers as we put the slats in place. They fit. & back to work we went on making the bed again. Thanks Adam, you saved the day!

Logie thought he was sleeping in his big boy bed the last few nights but his eyes lit up when he saw that his new bed was BIG. Sadly, he didn't even want to rock tonight, he just wanted to climb in his bed, all by himself. 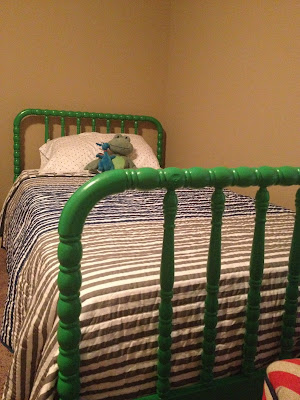 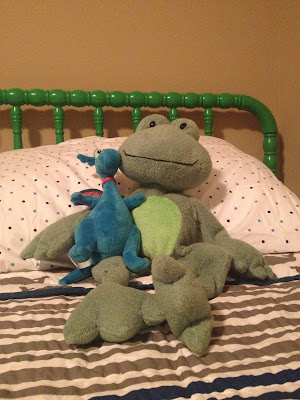 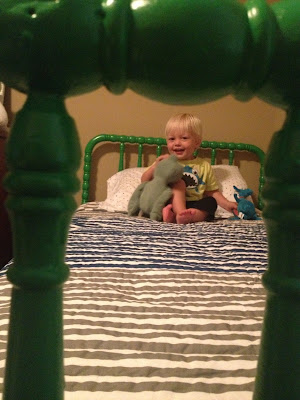 Lots more still to be done with his room but we are off to a great start. I'm thinking he needs an "L" wall.  Wonder how many cute L's I can find...
Posted by Kayla South at 10:06 PM