Is a phrase we have repeated a lot this week. & lucky for us because with Light Switch Kaden, you aren't always sure what you are going to get.

Most people know that Justin's family has a lake house at the Ozarks. His grandpa built it when his mom was little & ever since he was a baby he has been spending summers at the lake. Sadly, we haven't been down for almost two years--Logan was just a few weeks old & it was 4th of July weekend the last time we visited. I'm not sure why we didn't go last year, maybe it had to do with having two little ones under 3 and being near a VERY large body of water--& yes, the beach is different, you can gradually make your way in the ocean, not the case at the lake.

Anyways, we decided that it was time to really introduce the boys to what the lake is all about so we planned a staycation. I mean it isn't St. Maarten (we spent this same week last year there) BUT it was A LOT closer & we had no issues with planes. Plus we knew school would be back in & it would be like having the entire lake to ourselves. & it has been.

But back to the phrase of the week. Best. Case. Scenario.

We arrived Sunday evening so that we could wake up on Monday and head out to the water. The boys were eager to see what it was all about. Justin & I pretty much thought that one of us would be in the water and the other on the deck waiting to either lower or raise each boy in or out of the water. You see, there is about a 2 foot difference between the dock and the water & even though Kaden loves jumping in the pool--we were pretty sure he wouldn't even TRY jumping in the dirty-can't-see-the-bottom-lake water. It wasn't 5 minutes into our first trip to the water & he was standing on the edge looking over his toes at the water.

He looked back at me & then at the water again.

& then with a little curiosity in his voice he asked "Can I jump?" & then repeated himself with more assurance in his voice like he was saying I've got this. No big deal.

& then he jumped-feet first, hands in the air with a little CANON BALLLLLLLL. 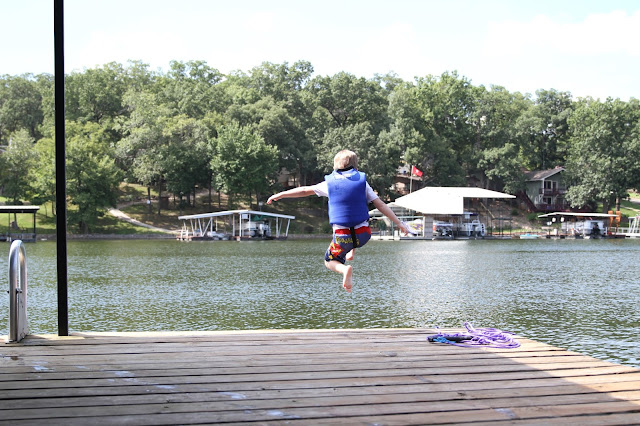 He spent the next 40 minutes or so climbing up the ladder, running the length of the deck and jumping in without a second thought. Like I said-Best. Case. Scenario.

Not only were Justin & I super proud of our only-going-to-be-three-for-three-more-days (tear) biggest lil' dude but he was pretty proud of himself.