Monday was the day we took on Sea World. We were up and out of the hotel by 9 and had our tickets & were waiting in line for the doors to open. It was going to be a good day.

To our surprise, it didn't look overly crowded & then we realized that Texas was still in school--consider ourselves lucky. 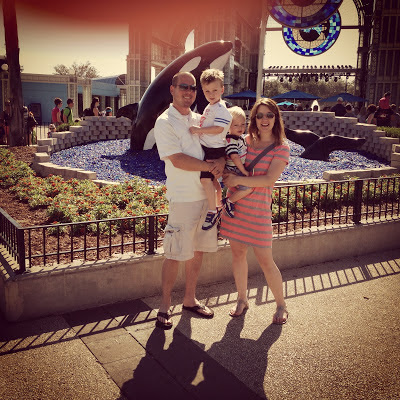 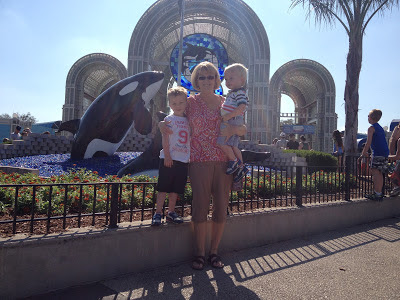 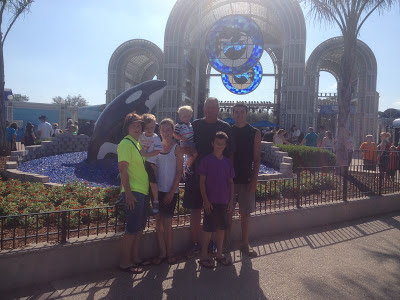 Before even entering the park we had a map & had planned out our lineup of shows. First up the Sea Lions & since we had a little time to spare before the show started we decided to feed a few of the sea lions. 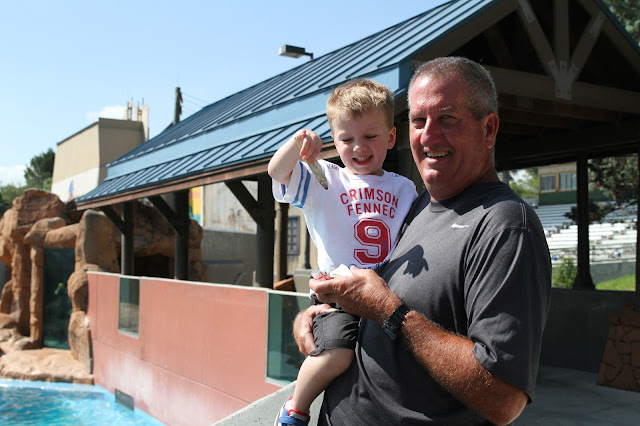 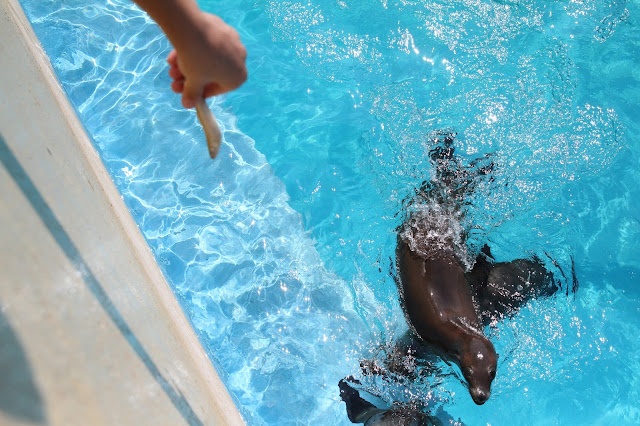 and then it was show time. Kaden was so excited to see the sea lions perform & the highlight of the show by far was at the end when the HUGE walrus came out and did sit ups. It was pretty darn amazing. 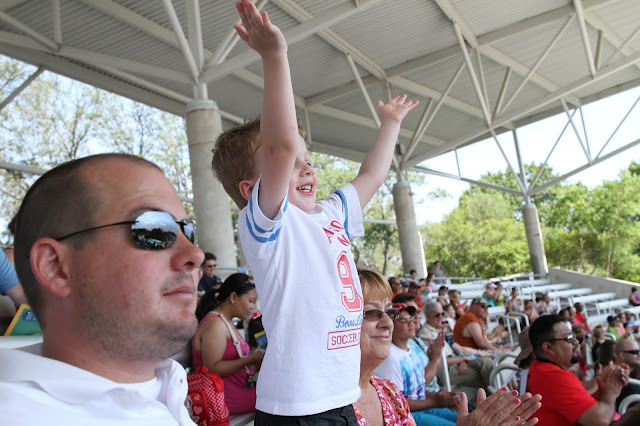 and the boys had two of the best seats in the house, right on their Papa Tom & Grandma Sara's laps. 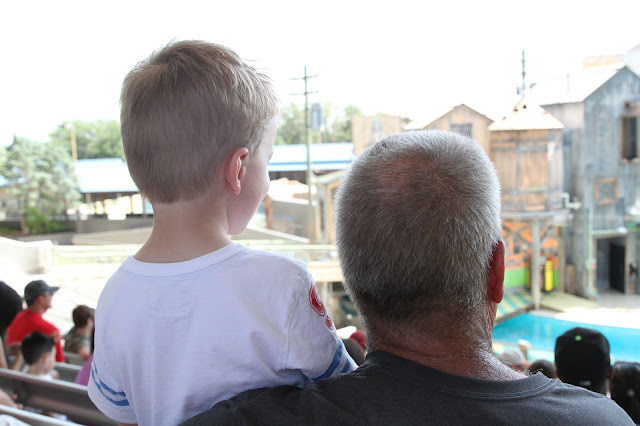 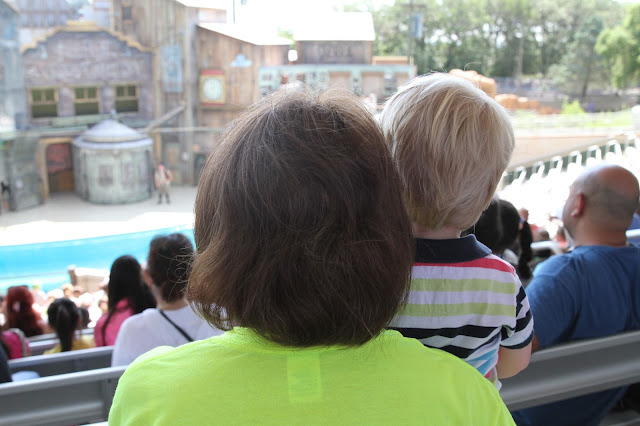 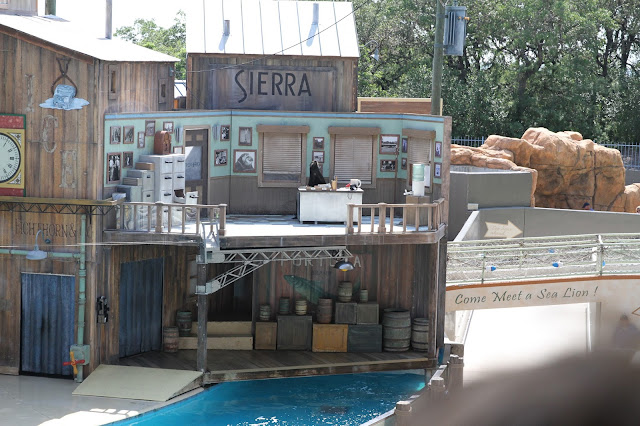 After the sea lion show was over we had to bust it across the park to see the One World show which include the star of the amusement park & the whole reason we were going there--SHAMU.

But on the way there we ran into a few distractions. First up, Franklin, the ever so adorable green dude with a hardshell. I wasn't sure what the boys would think since they had never really encountered a character before but they were all about it and even went back for seconds. 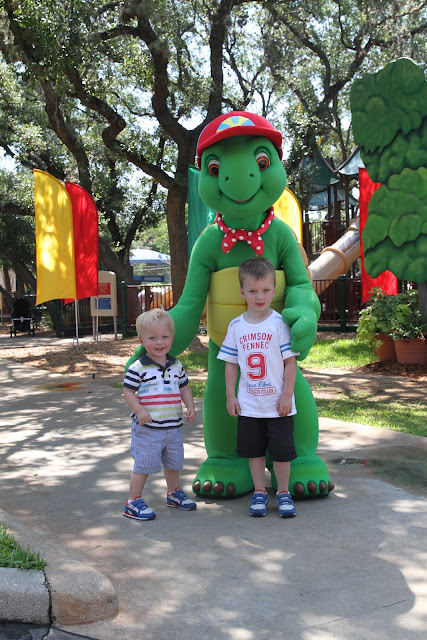 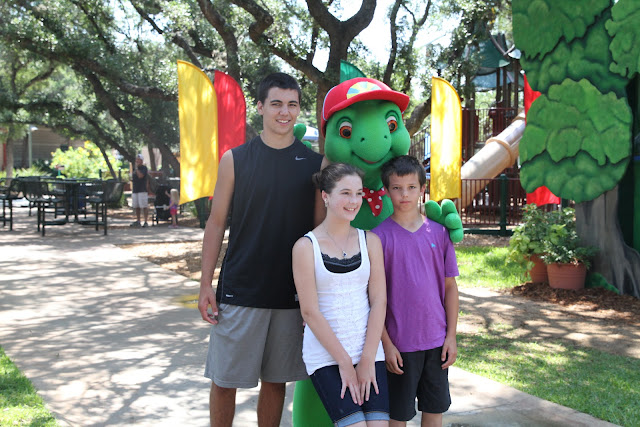 Our next distraction came in the form of a HUGE water ride--Brett, Blake and Leah were ready to jump in line. Grandma Sara & I were right behind them but as we entered the line on the ride, we noticed you only needed to be 39 inches tall to ride which meant, Kaden could RIDE! I asked if he wanted to ride and he said yes. We started making our way through the weaving path (there was no line) & approached the pirate ship. He followed Grandma Sara right on in, sat down and we buckled him in. I kept explainig what we were doing as we were riding up & what was going to happen. You could tell he was a little scared because he was covering his ears but what three year old wouldn't be… 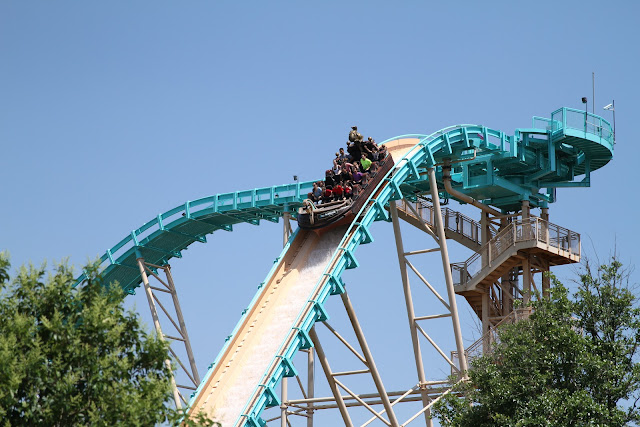 & then it happened, the drop! I am holding on for dear life while holding onto Kaden. My Mom is holding on for dear life & then holding onto Kaden too. We finally hit the bottom and the water goes everywhere & unfortunately this brought on the tears with Kaden but not for long. By the time the ride was over he was all smiles again. When asked if he had fun he said "I super, super cried Daddy." & when asked if he wanted to go again, he just shook his head no. Poor guy. Maybe Shamu would make him feel better...

Once we arrived at the One World stadium we took our seats & thankfully, Justin took over the camera and got some great shots of our dear killer whales. Not only was the show amazing but we couldn't get over how smart & intelligent they were. Its amazing to know that a few waves of the hand can send a whale across the pool, have it turn upside down & splash everyone with water using their tale. Remarkable. 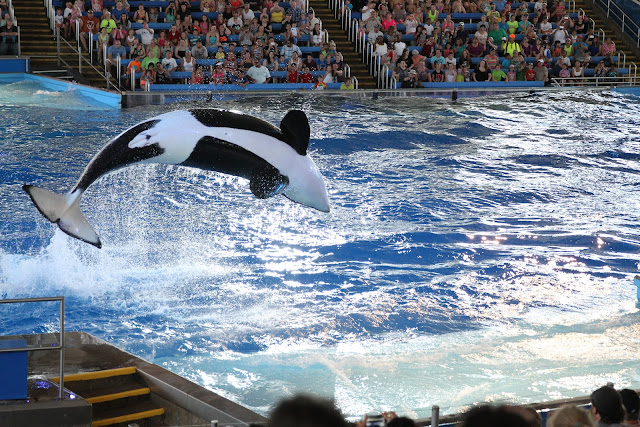 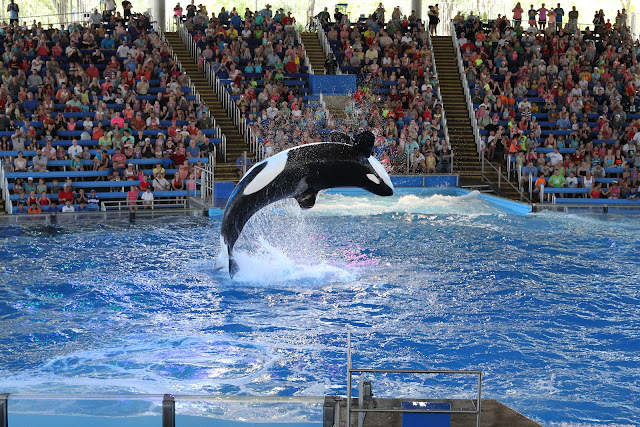 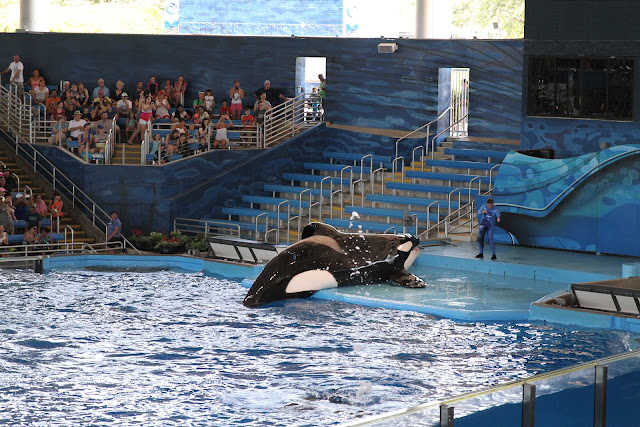 After Shamu it was time to see the dolphin show which not only had a few different types of dolphins but also had synchronizing swimmers & macaws. I thought the show was entertaining, the boys, well they were just HUNGRY & it didn't even matter what I was handing them, they were scarfing it down. 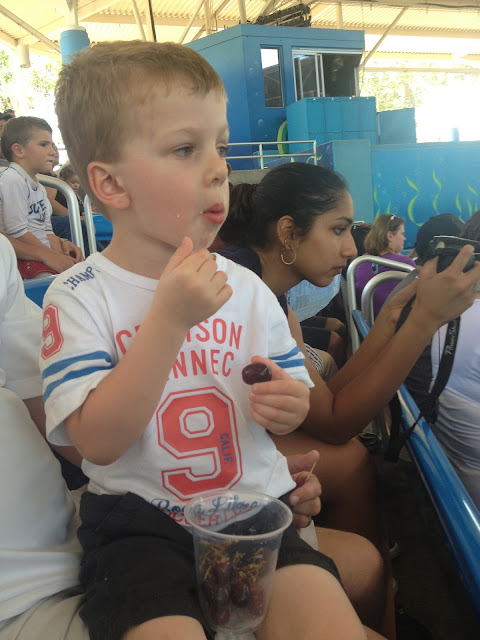 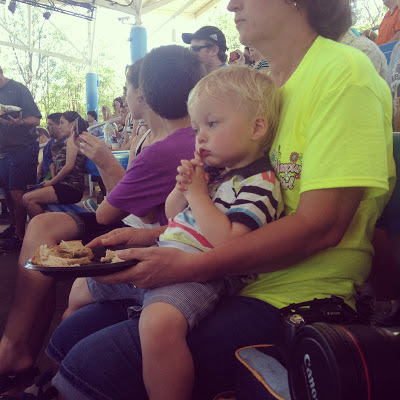 The day was going by quickly. We did a little fishing on our own, visted the fish aquiarium to see the sharks and sting rays, we saw the dolphin pool & we did a little shopping. Kaden not only got himself a stuffed animal he named Sea World, appropriate but he got his little brother one too--how sweet is he?!? 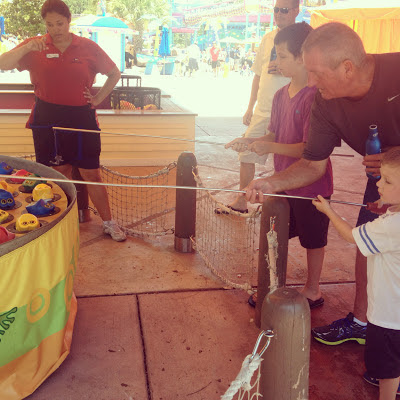 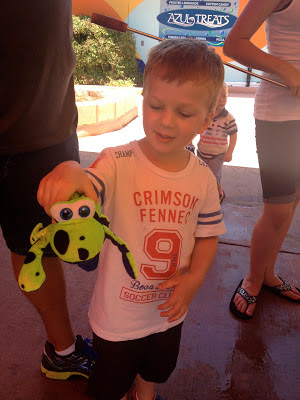 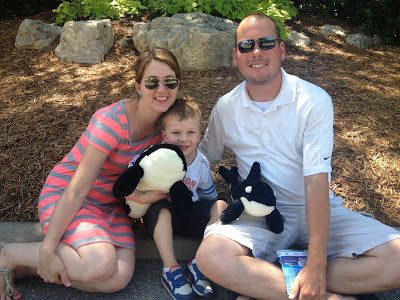 By this time the boys were getting a little restless and tired. We needed them to take a nap & as if on queue, Logie closed his little eyes & out he went. While he slept, I became the cool aunt. Brett, Blake & I went on the BIG rollercoasters. Now I LOVED rollercoasters when I was in highschool but you quickly forget how jerky they can be but that didn't stop us. & thankfully, no one puked! 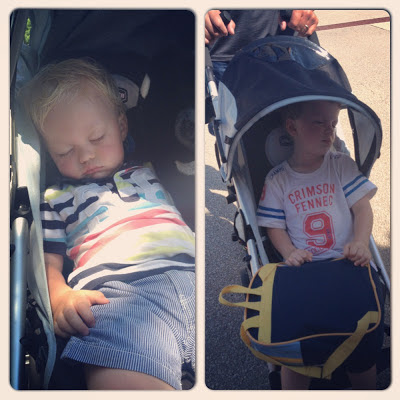 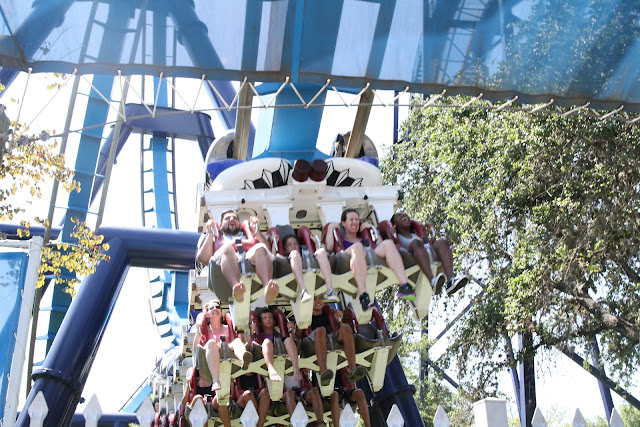 After we got off the final rollercoaster we went on one last ride, Rio Loco. Kaden was barely tall enough to ride this ride and wasn't quite sure about it until Justin said he was going to go. He stepped right up and on we went for a little riverboat ride. He smiled a little more on this ride but still rode with his hands over his ears, for the most part. Towards the very end of the ride came the BIG waterfall & with a little prayer answered it avoided Kaden, for the msot part. We weren't able to excape without getting drenched but after walking around the park for 7 hours in 94 degree weather, we welcomed it. 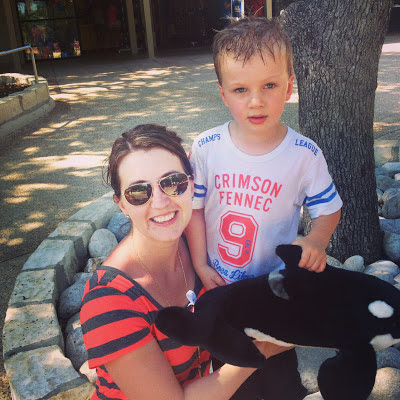 All in all it was a great day at Sea World & it was so nice to be able to spend & create memories with our family. I couldn't have been more proud of our biggest little guy for taking on the huge BIG KID rides & for Logie being such a trooper all day long. They both did pretty great considering it was a LONG 7 hours at the park, from open to close.