Immediately after our 2011 Baseball Tour wrapped up we started throwing out destinations for our next road trip. We decided that we would need to skip 2012 due to a number of smaller trips and our beach vacation but we couldn't let it go another year…

A few of the ballparks that we were tossing around were the Colorado Rockies, the Chicago Cubs,  the  Chicago White Sox but in the end we decided to go with the Texas Rangers in Arlington. It was a great decision because not only were we able to visit a new ballpark with the boys but we also got to watch them take on our beloved Royals & we WON in 10 innings! It was a great day…

We started out on our adventure on Friday around lunchtime. We picked the boys up, headed to Grammy's & then down I49 we went---by the way, so weird to call it that and not 71! We arrived at my mom & dad's only to learn that the air was out in the house & it was HOT or at least it was for me. A short while later Uncle Zack & Aunt Lindsey arrived with a walking Miss Maddie to celebrate Uncle Zack's 30th birthday--talk about making one feel old!

We had decided that since it was a 3 o'clock Saturday game that we would just get up early on Saturday--4 o'clock early--and take off for Bella Vista. That's right we had a pitstop, we were picking my sister & Rob and the kiddos so they could join the adventure too. So there we were 12 people in three cars making our way to Dallas.

Five & a half hours later we finally arrived in Dallas for lunch. & since my dad was with us he had it all planned out, just like our last baseball tour. He had scoured the internet looking for a Diner, Drive-in & Dives restaurant & he hit the jackpot. We visited Hard Eight BBQ, a BBQ joint where you tell them what you want & how much of it you want, they cut it right there in front of you & then you weigh it to see what damage you have done. 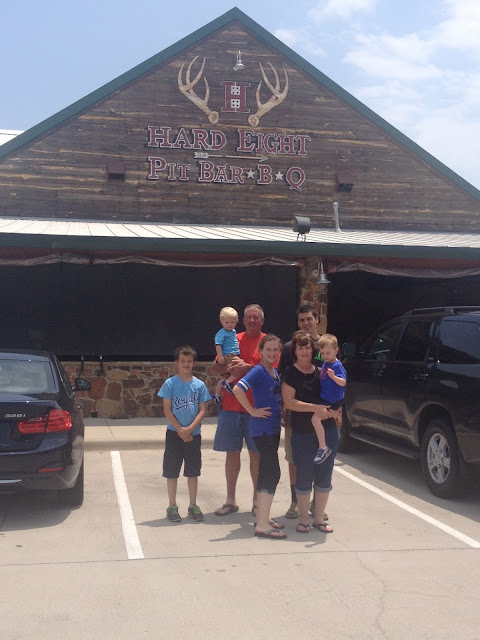 After some delicious grub we headed to the hotel to check in & off to the ballpark we went. Luckily we were able to find a hotel that was close enough for us to enjoy a short walk to the field. As we approached the ballpark I noticed what seemed to be a lot of Royal's Fans & then it dawned on me, the Rangers wear blue too. 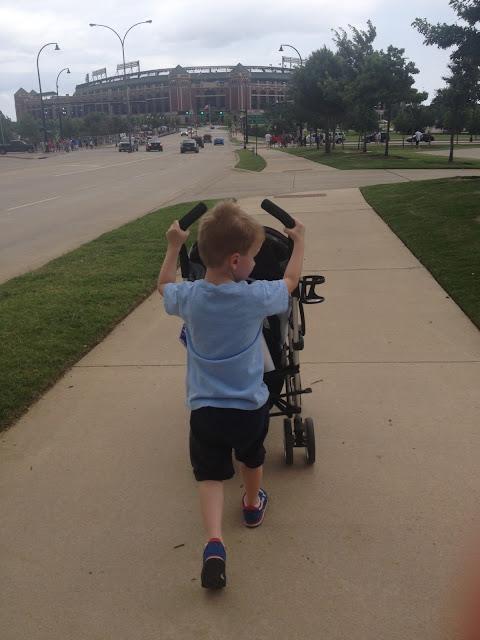 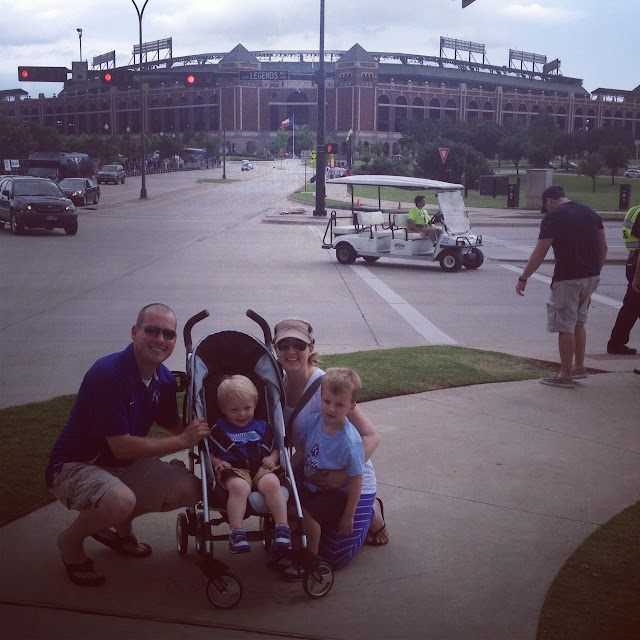 As we were heading into the ballpark we noticed that the rain clouds had moved in & were getting ready to dump on us. Fortunately our seats were close enough to a covered picnic area for us to let the boys run around until the game officially began…


And right as we made our way to our seats, the Star Spangled Banner came on. We stood alongside the Ranger's fans with our hand over our hearts & gave tribute to American & all those who have fought or are fighting for this great nation. & it made this mommy so proud to see Mr. Logie following suit, he stood there for the entire song with his hand right over his heart. 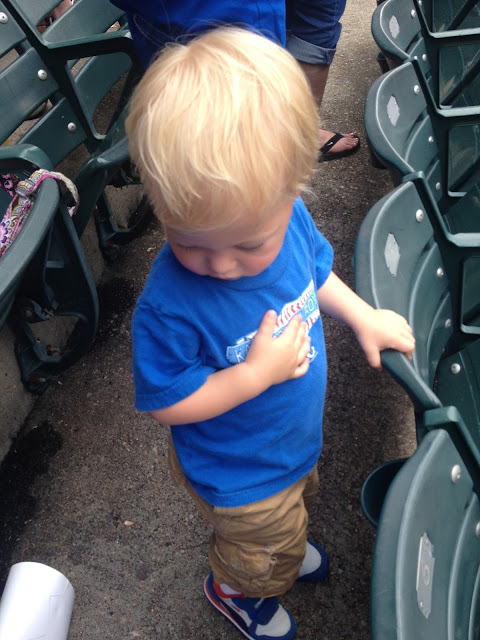 The ballpark was just as beautiful as the weather was that day & the company, well that was the best part. It only took a matter of a couple innings and both Kaden & Logan had made "friends" or at least that is what Kaden was calling Blake & Leah--guess he isn't really old enough to understand cousin. 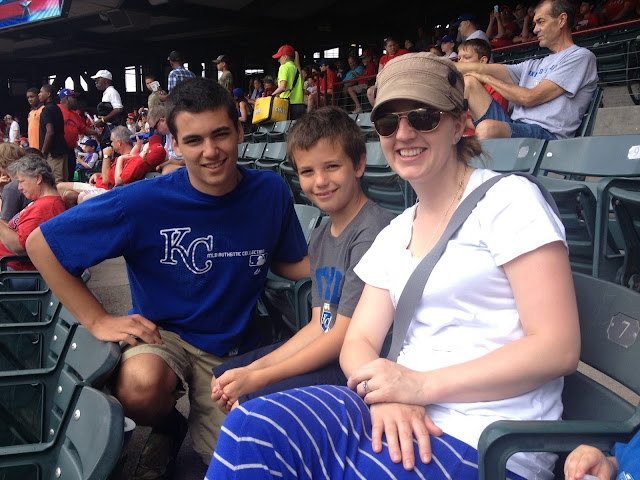 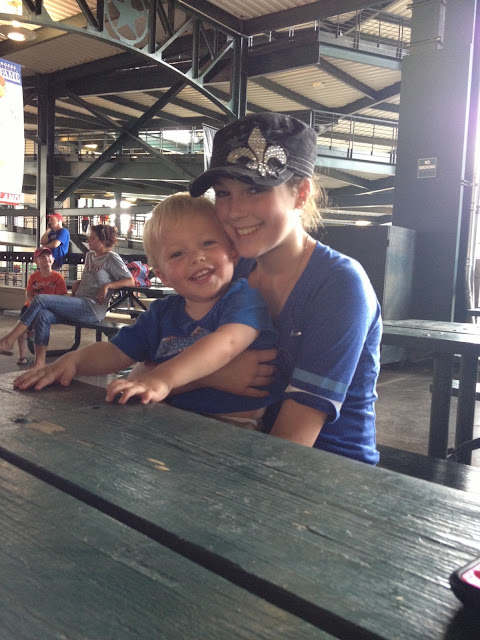 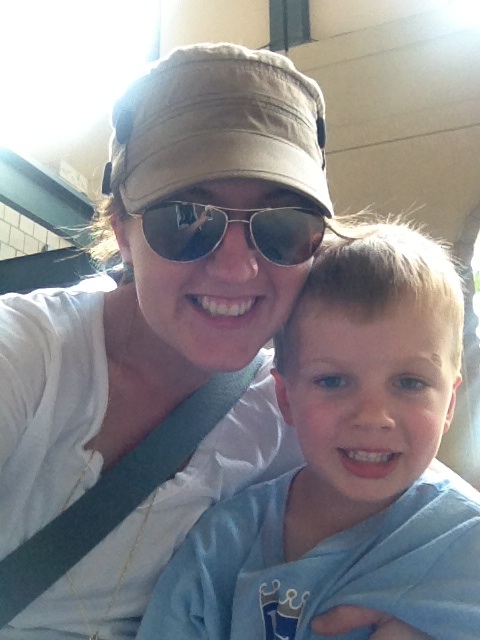 The whole gang lasted the entire game. We were able to walk out of the Rangers ballpark with a big W on our side and big smiles on our faces as we thanked the Rangers fans for their hospitality. & I should note that the fans & the attendants were the nicest people we ran into on our entire trip. We had a wonderful attendant who stored our stroller for us, gave the boys free water & made sure that we knew about the secret picnic area when the rain started to fall. I could have wrapped him up, stuck him in my pocket & brought him back with us, thats how great he was. 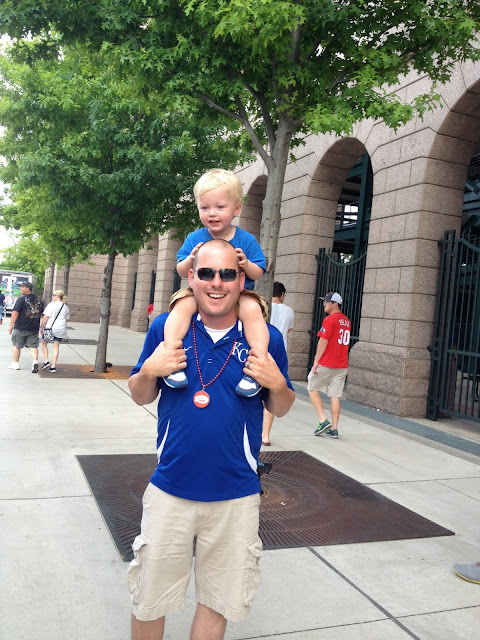 Once the game was over & we were back to our hotel we decided to walk next door to Joe's Crab Shack for some dinner. We walked in just in time--ten minutes after we arrived it was over an hour wait & we got the best seat in the house--right next to the playground to let the boys run and play. We needed these boys worn out as much as possible because the next morning we were off on another road trip & this time we headed further south. San Antonio south.

Thank you Dallas for the great memories & thank you Royals for giving us the cherry on top to our 2013 Baseball Tour--A WIN!