Sometimes things need a little reworking before you figure out just what you want.

Before we moved into this house I had found an old wrought iron bed on craigslist that I couldn't wait to use in Kaden's new room. I kept it stored in our old, one car garage until a few months before moving when I pulled it out and started priming & spray painting it yellow. I wanted 'safety yellow' but I ended up with more of a sunshine yellow. It wasn't my favorite color but I could live with it, well Kaden could live it. I didn't do the best job when it came to prepping it either-it wasn't smooth & more than likely the rust would end up peeking through and the paint would start chipping & well we just couldn't have that, now could we?

Now forgive me with the pictures from this older blog post, it was a tad dark when I was trying to shoot but click here to see what the old bed looked like.

So how did we get it to look like this? 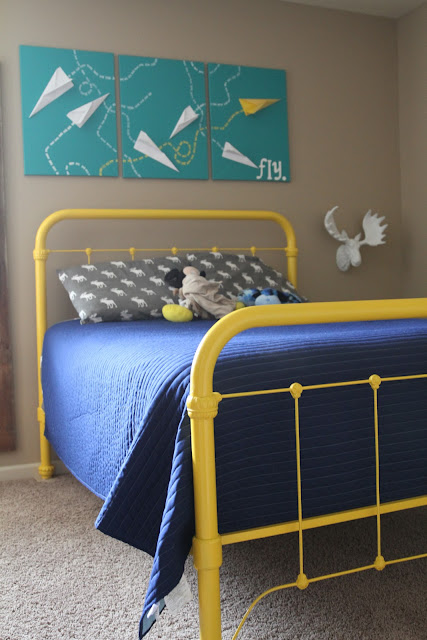 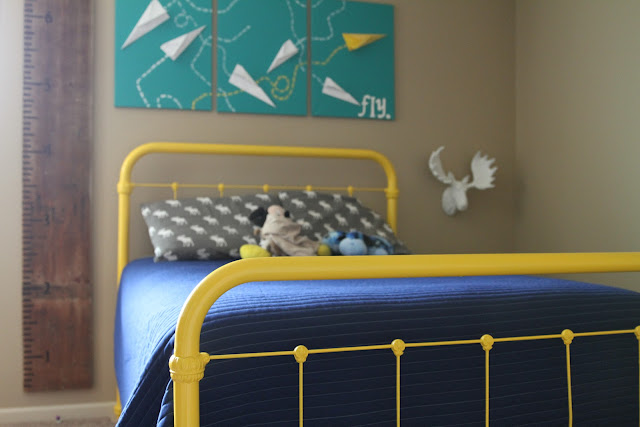 While my parent's were in town over Easter we broke Kaden's bed down, threw the mattress on the floor & loaded the frame up in their car. They took it home where someone they knew gave it a good power-washing which made it as smooth as a baby's bottom. Then they painted it the safety yellow that we had been looking for. And on Logan's birthday my parent's hauled it back up to us, we put the frame back together, threw the mattress on top & Kaden ran in and shouted "Yea, Baby".

It is amazing what a REAL paint job can do to a piece of furniture. Now the question becomes, what color do we paint Logan's bed, because I found an identical bed on Craigslist and we are picking it up on Sunday! Time to get that little boy out of one said crib and into his own big boy bed. 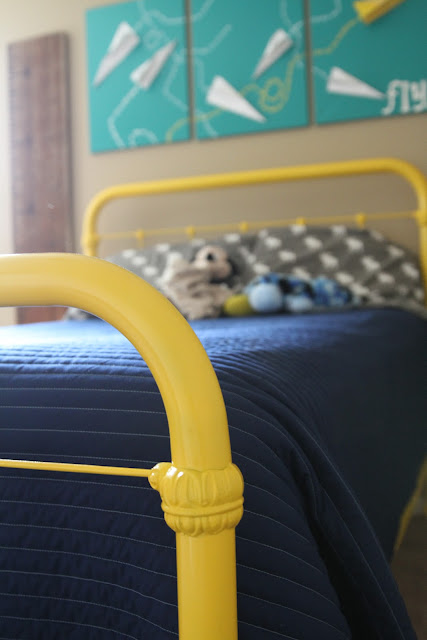 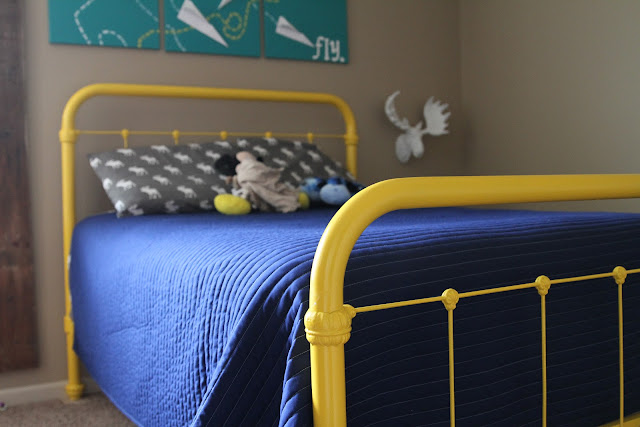 How is this day already here? How can this little man already be turning two? & how can he go from this… 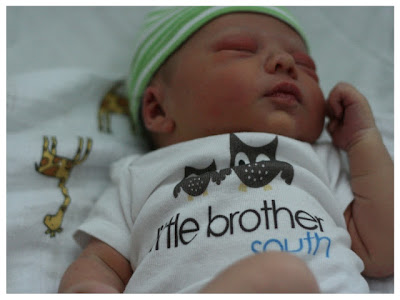 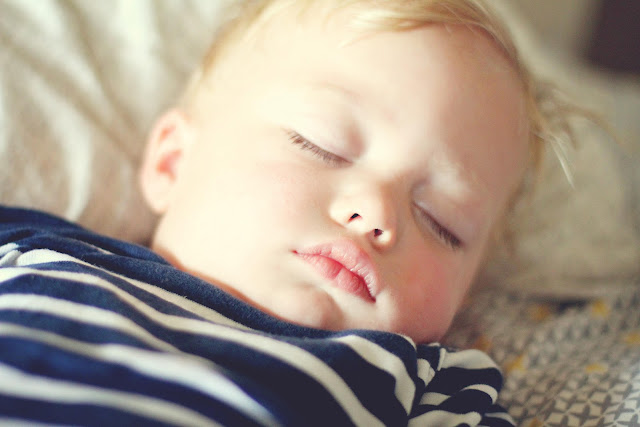 Logan you have been such an amazing addition to our lives. You are just the sweetest little man I know & always, ALWAYS have the ability to make us smile. Although you LOVE to do everything your brother does, you are your own you. You can't go to sleep without your two lovies, your dino, your baby, your doggy, horse, froggy and we can't forget about the book. How you sleep in a bed full of your friends is beyond me.

Your first words each day are MOMMMMY or DADDDDY, quickly followed by Fruit Loops? Milk? Spoon? and as soon as I step out of the shower you are there by my side waiting to be lifted up to "your spot" on the sink where we spend the next 20 minutes chatting it up. These 20 minutes have easily become one of my most favorite times of the day.

No one does a hello or a goodbye the way you do. You have the biggest wave which is matched by the cutest smirk I have ever laid eyes on. I love walking through Ms. Brenda's door after a day at work because I know you will be charging straight for me ready to wrap your little arms around me for a big Logie hug. Only to be followed by "sucker?" but at least I rate above the sucker--for now. I love how the first thing you do when you walk through the door when we get home is to greet your Daddy with a big "Hi Daddy" followed by an "Eat." & to the table you go.

I love how gentle you are with babies. I love how you have become a little more territorial when it comes to me--took long enough! I love how you have no fear & want to try anything once but that you learn lessons very quickly & we hardly have to tell you no twice---although, you are just turning two, so that could be changing.

I love seeing you learn. You are the smartest, newly two year old that I know. You play a mean game of Zingo. You can put almost every puzzle we have together in no time. You know how to use our phones almost better than we do--although this may not be the best thing…

I love how peaceful you look when sleeping. These last couple of days I have tried taking advantage of those restless sleeps you have been having & snuck in, picked you up, & brought you in with me. We lay down and in a matter of minutes you are making that cute little noise you do when you suck on your lovies. Your breathing calms & you nestle right into my arms & there we both drift off to sleep. You dreaming of dinosaurs & suckers. Me-I'm not dreaming, cause you were our dream come true. You completed our family & we couldn't be more blessed than we are today. I'll admit, the one thing I was constantly worried about when I was pregnant with you was how I was going to love you as much as I loved your brother--how silly I was. It happened instantly and each day it grows a little more.

We love you to the moon & back. 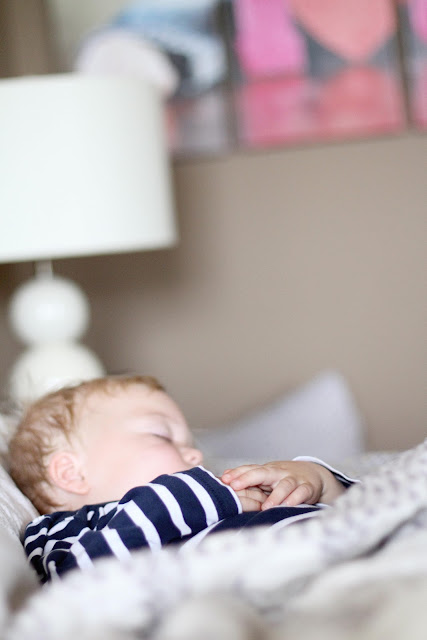 Hoping to have some pictures of the birthday boy to share a little later today, if the weather cooperates & we get to do our own little mini-shoot.
Posted by Kayla South at 1:26 PM No comments:

Wow. I almost forgot how to blog, its been over 2 weeks since my last post. & to be honest, I'm not really feeling this whole writing thing BUT this is more about documenting our lives than it is about me writing---& lets be honest, the writing isn't that great & its all about knowing what the kids are doing and seeing pictures of them. Lots of pictures of them.

But before I dive into this blog post, I should note that I have another post that has been in the works for 2 weeks, I just hit a very rough patch & just haven't found a way back to it. I'll get there. I'll document it but it may take time.

Now, onto the PARTY! We'll address the birthday boy in a future post but I figured I ought to at least document the party while I was feeling it…

Its hard to believe that Logan is about to turn two & has officially lived in this house longer than he lived in the old house. Planning this party was so different from all the past birthdays for both boys. I had an idea of the theme--dinosaurs but wasn't sure how I wanted it all to fit together.  Lots of ideas running through my head but literally besides knowing it was a dinosaur party,  nothing else got done until this week. In my head, I was thinking a fossil dig in the backyard. A dinosaur hunt. A few dinosaur tails & some cake. The adults sitting back and relaxing as the kids ran around the yard playing on the swing set and jumping in the bouncy house.

But then it happened. May. Snow. Rain. & all our plans had to change at pretty much the last minute & we moved all things party inside…

I focused the majority of the decorations around the cake table. We had a blue dino drink, green roar jello, dino tails & dino rocks. We had MoMo Roo cupcakes & a MoMo Roo special cake for the birthday boy. I found a few dinosaurs to put on the cupcakes & Rex for the "cake topper". I also bought a dinosaur birthday pack off of Etsy & the shop owner changed up the colors for me and personalized every little detail for us. 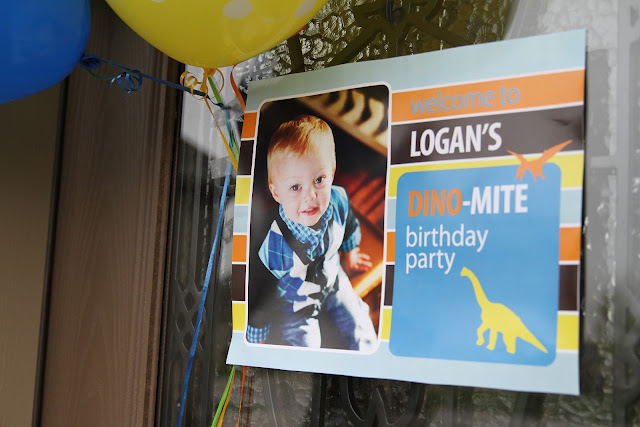 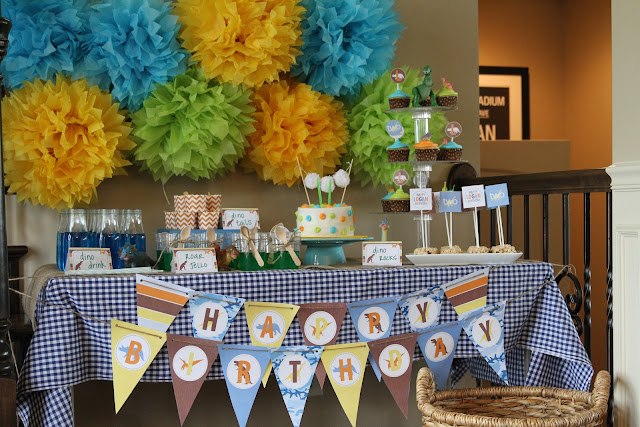 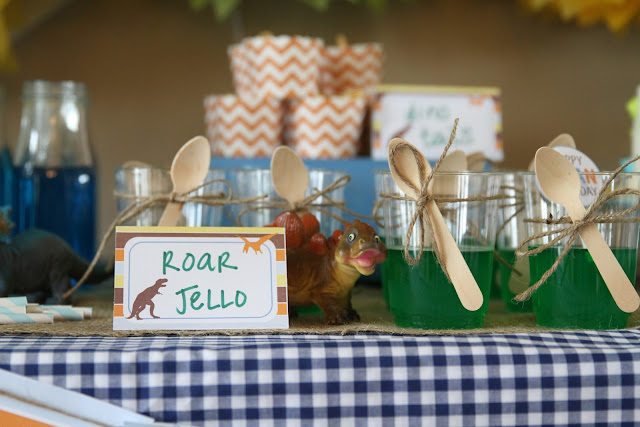 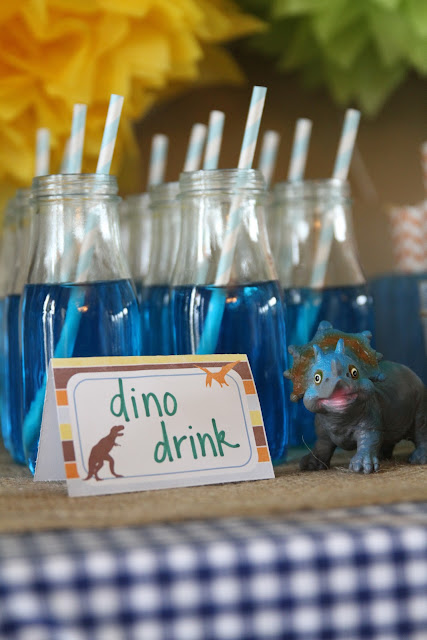 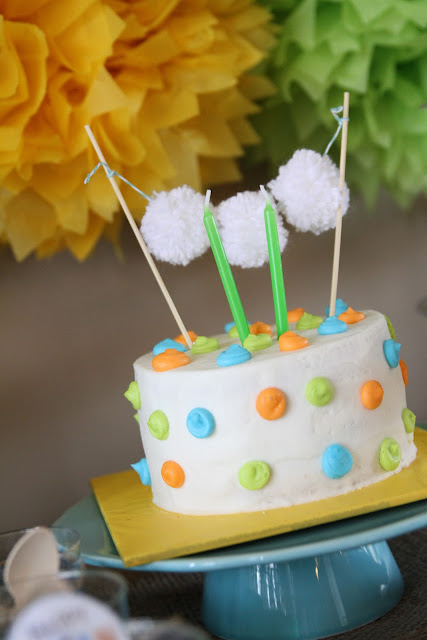 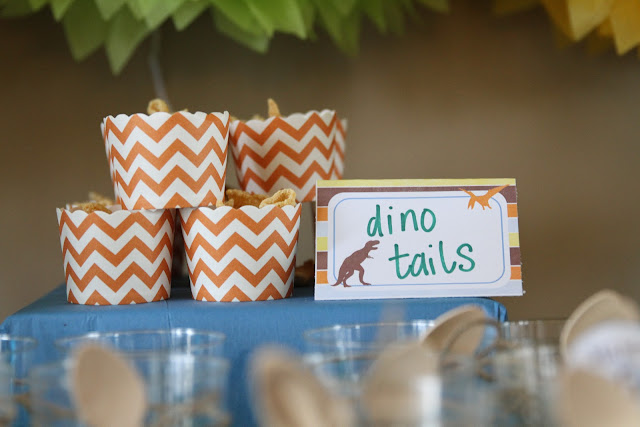 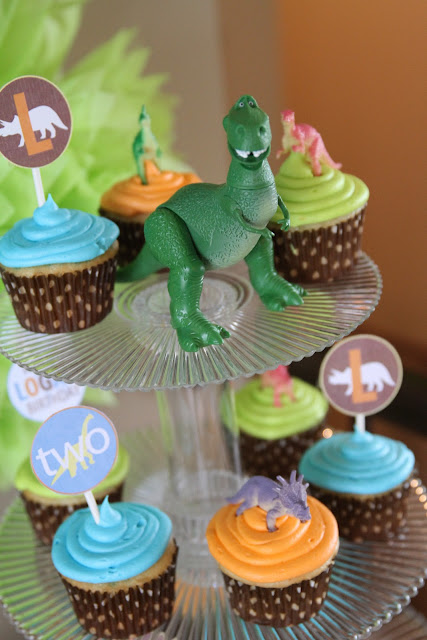 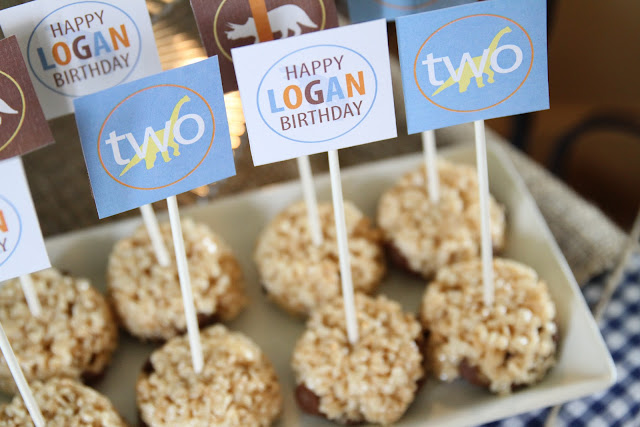 but the hit of the party was definitely the party favor-green & purple stuffed dinosaur tails. & I won't lie, I would have been crushed if the boys and girls didn't like their tales that Shanna with MoMo Roo created for us. But they did! They shook their tails off… 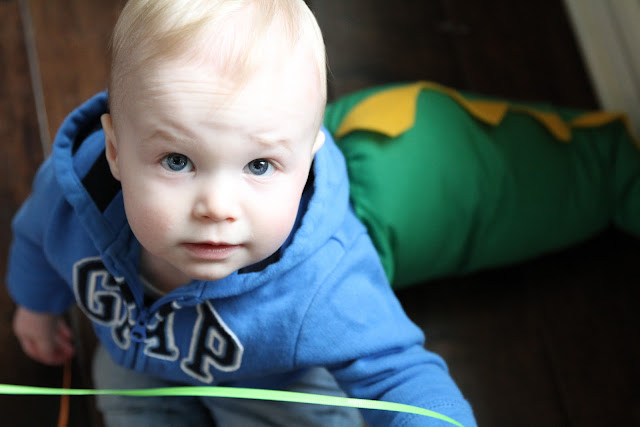 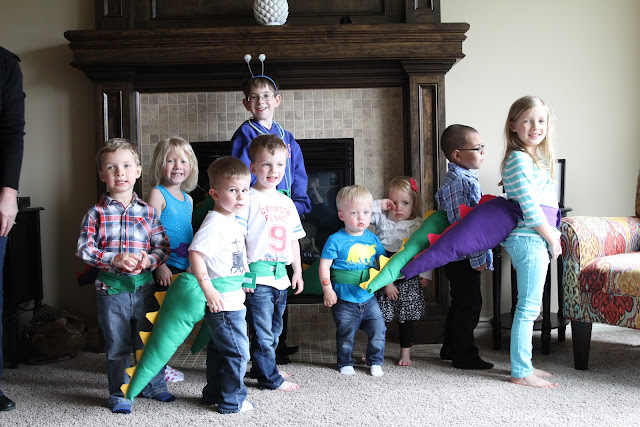 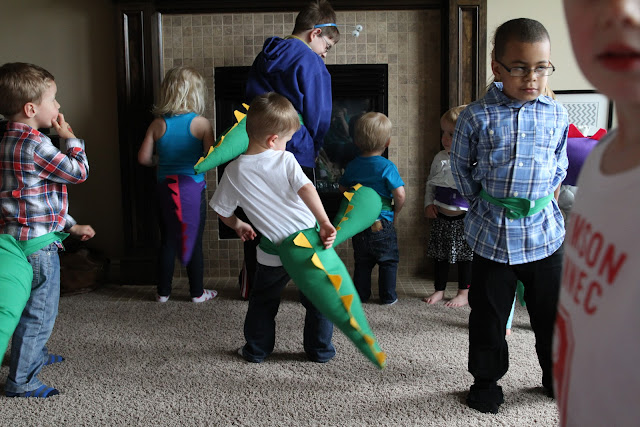 and it wouldn't be a birthday party without some cake! I decided to go ahead and get Logan another small cake, wanted him to have something a little more than a cupcake plus I had a cake banner to use from last year that got sent to the old house instead. I saved that sucker for a year & by golly, I was going to use it!

Look at this happy little guy! So blessed to call him our own. 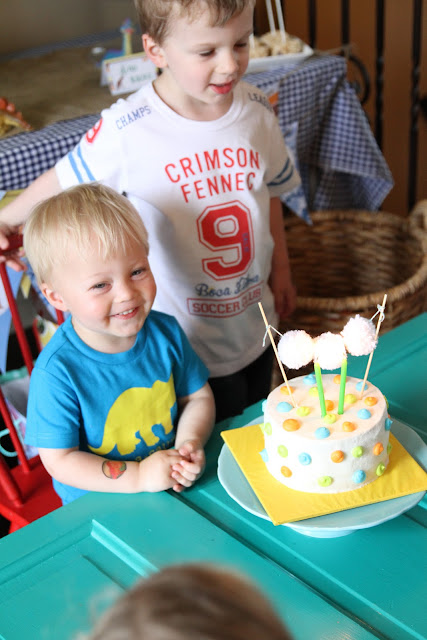 waiting very patiently as everyone started to sing. 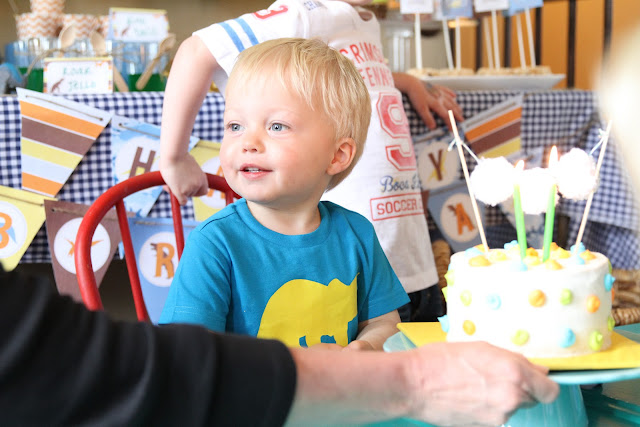 TAKE ONE--he couldn't wait any longer, he jumped the gun only halfway through the song. 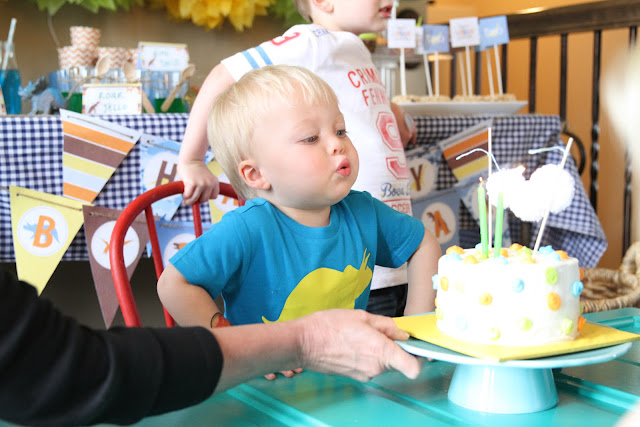 TAKE TWO--Kaden butted in & decided he wanted a turn at blowing the candles out. 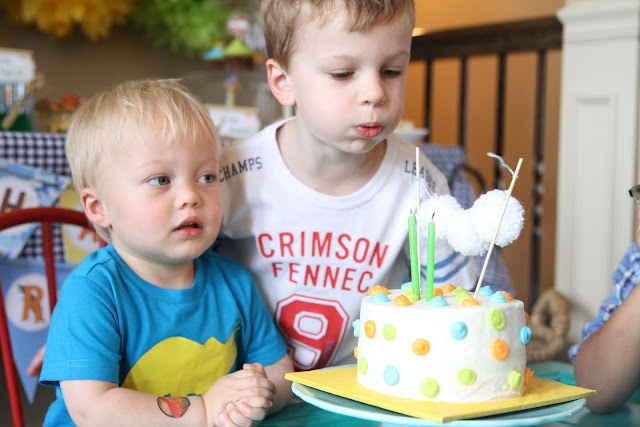 TAKE THREE--song is over & he nailed it! Probably because he had a warm up try! 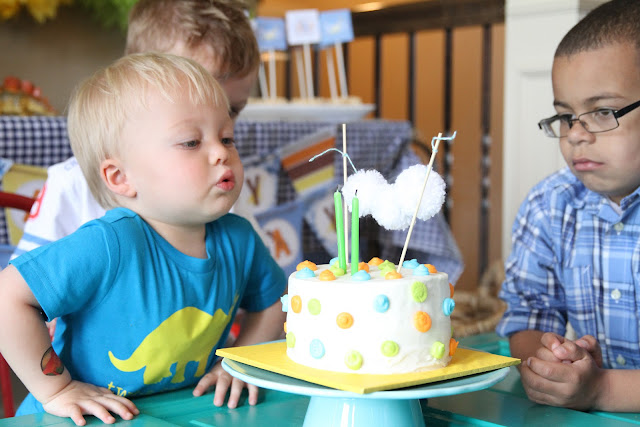 The icing was his favorite part. I gave him a huge piece of his cake and he picked off all the icing and then asked for a cupcake. A few pictures down, you'll see the cake, he doesn't touch it even though it was SOOO good. 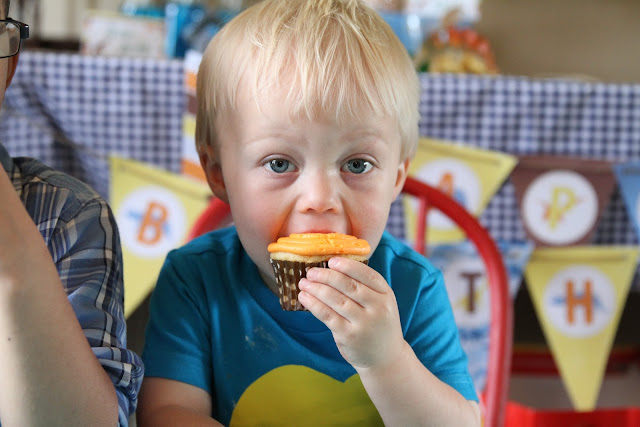 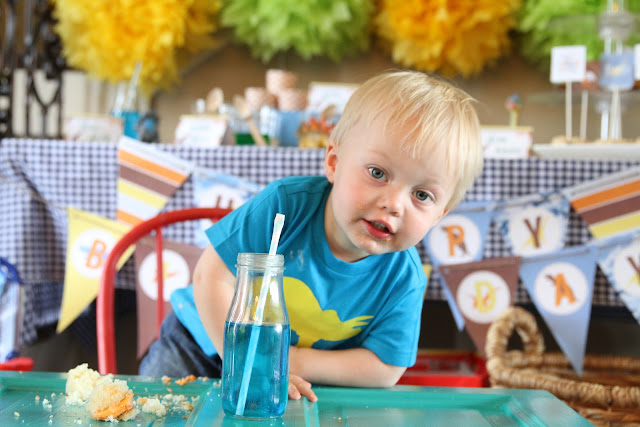 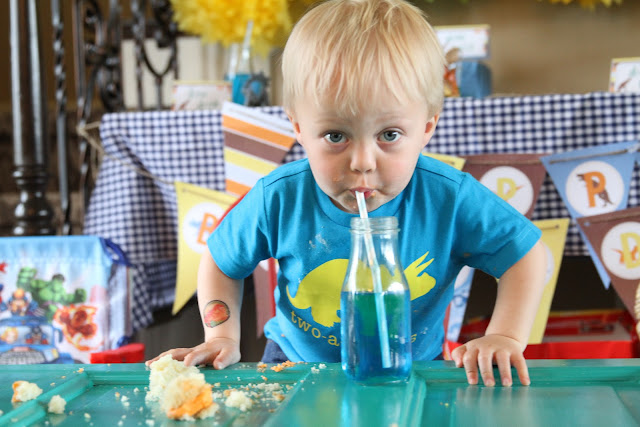 So there you have it. The party was a hit or at least I felt it was.  The best part of the party, our generous family and friends that came to celebrate with us & donate to one of our favorite local charities. For Kaden's 2nd birthday we decided to collect books in lieu of gifts & we decided books were the way to go for Logan's 2nd birthday too. He loves sitting and reading so it only made sense. We collected over 60 books for the boys & girls at Operation Breakthrough. Like I said, A.M.A.Z.I.N.G. family & friends.

Thank you all for being such important people in Logie's life. Thank you for loving him & teaching him. We are blessed. So VERY blessed.