This year we decided to host Easter Brunch at our house. Justin's aunt & uncle were coming in from Columbia & they were brining their granddaughter. My mom and dad decided to come up. My brother & his family came up a day early and spent the night with us. And to round out our party we had Justin's brother and his family & Justin's mom.

We woke up and started the morning out with baths. After baths were over we headed down to see what the Easter Bunny had brought the boys. They were excited when they found Woody and Buzz waiting beside a basket full of eggs.

Maddie was pretty excited too. 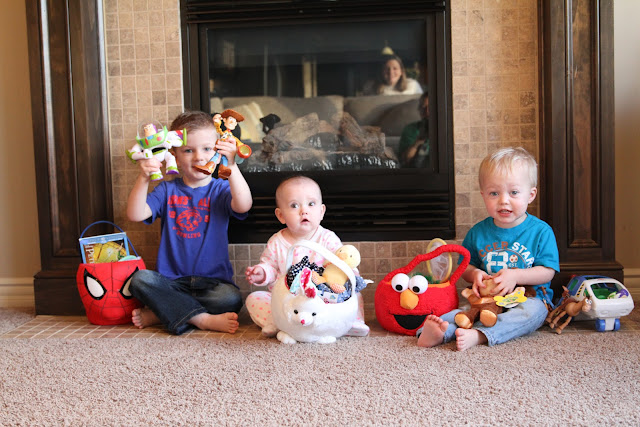 Not too mention she was oh so adorable in her Easter dress.

Side note…if I had a girl, I would totally go broke. I mean it would be a dress for every occasion. 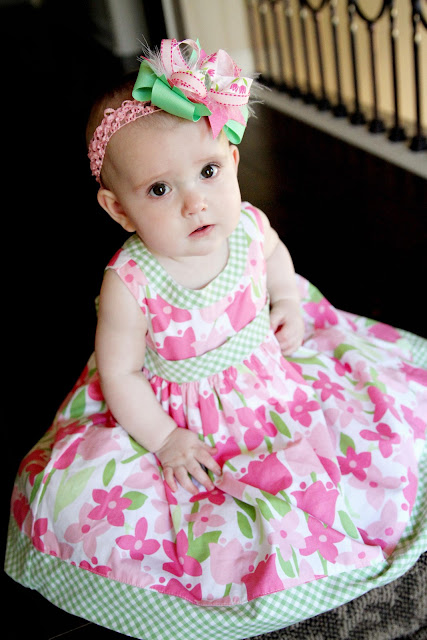 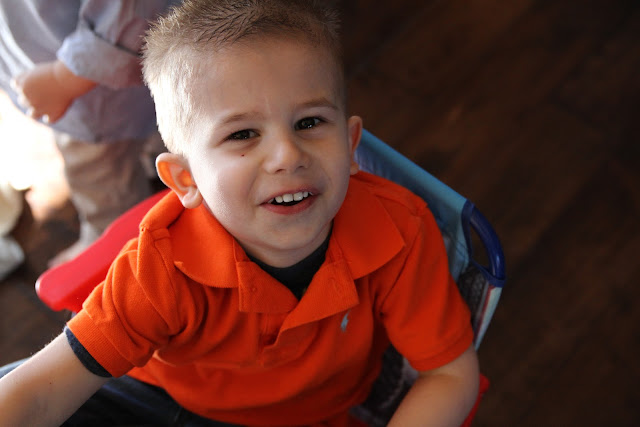 As soon as I brought out the kids table, Logan plopped down and didn't move until he food was served to him. He literally sat there for 30 minutes with a fork in hand before we gave in and gave the little guy some food. He just wanted to eat... 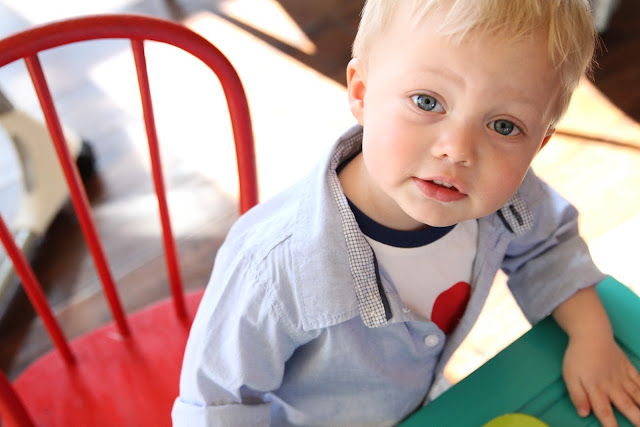 After brunch, it was hunting time. 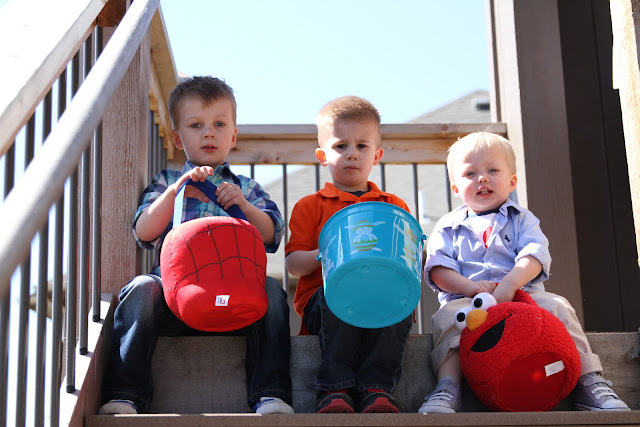 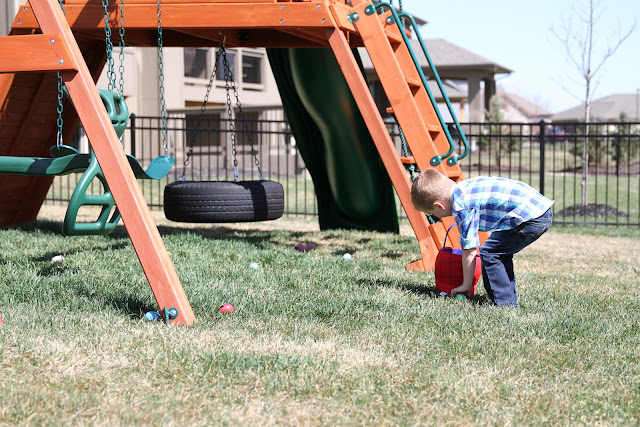 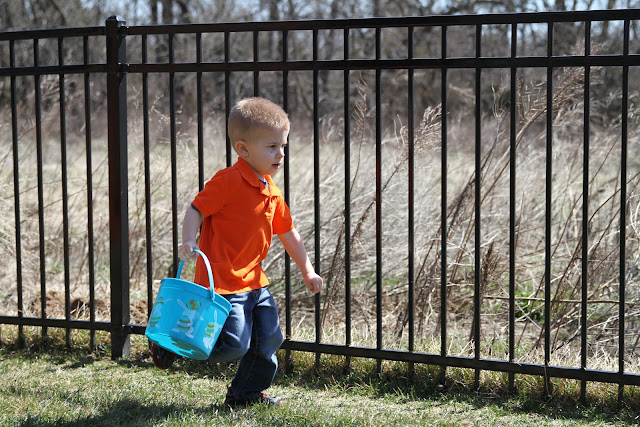 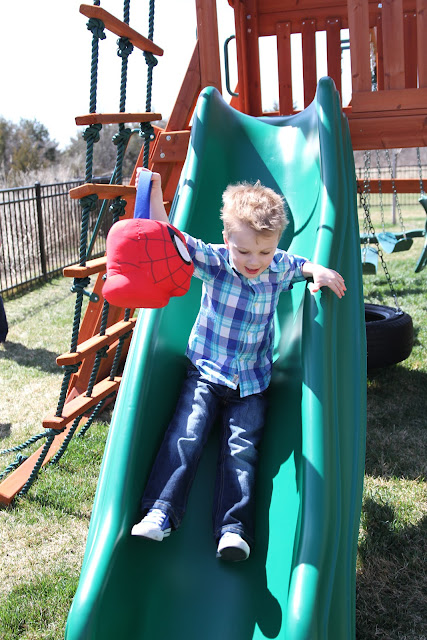 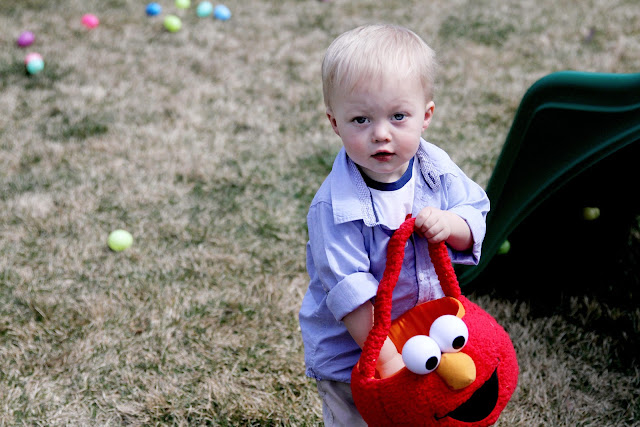 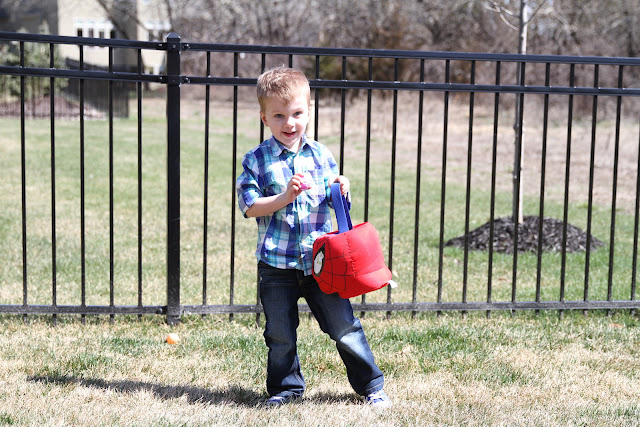 Once all the eggs were found it was time to break them open and see what kind of goodies were inside. A big thank you to the Easter Bunny, he got my message and LIMITED the chocolate. These eggs were filled with money, Squinkies & Zig Em's--perfect for three little boys. 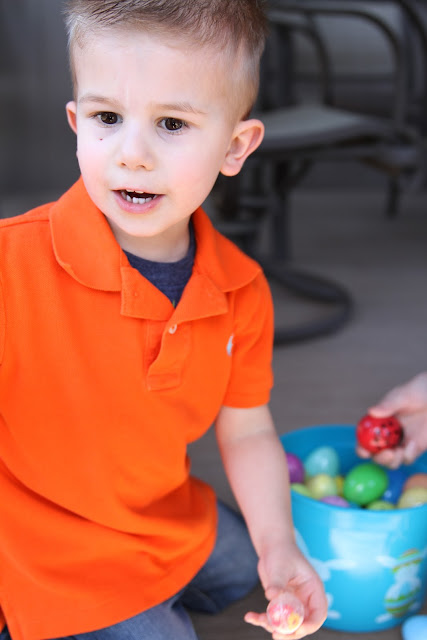 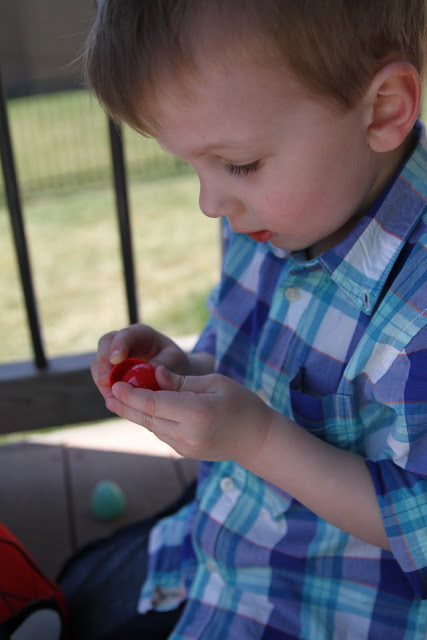 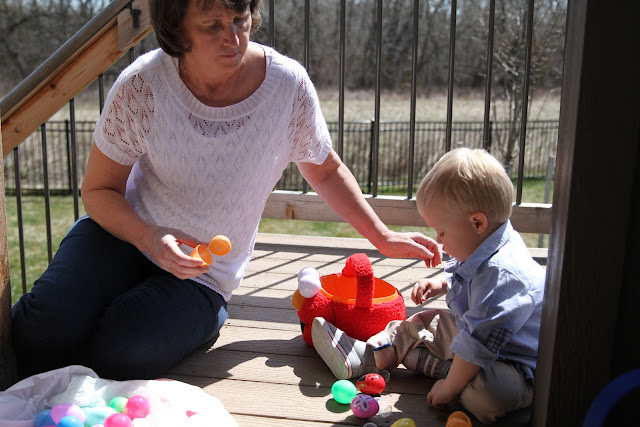 After the first round of hunting the boys wanted to hunt again so Grandma Sara hid all the eggs. We sat the boys back down at the starting line & when we gave them the green light they were off. They reached the eggs. Picked up the eggs. Shook the eggs. & when it didn't make noise they tossed it aside on the grass. They proceeded to the next closest egg & hoped for a different outcome but no such luck. After realizing the eggs were all empty, they quickly lost interest and just went to playing. 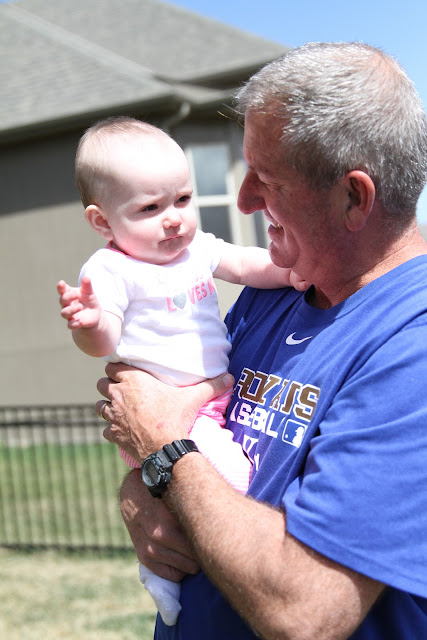 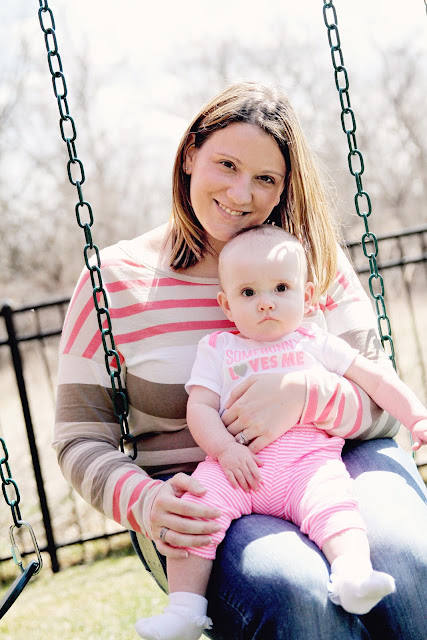 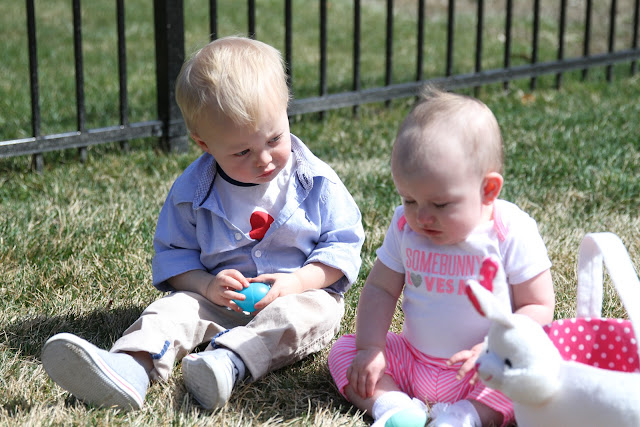 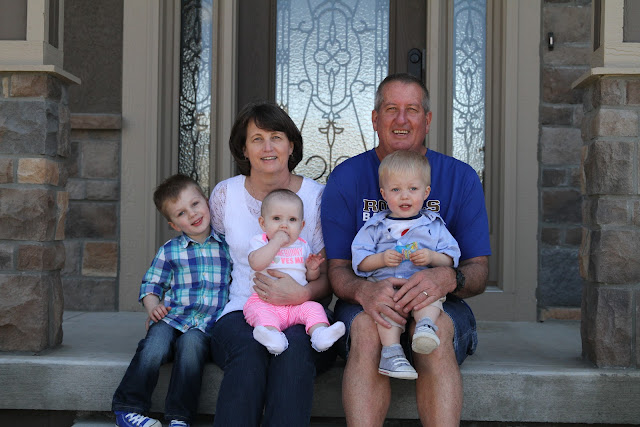 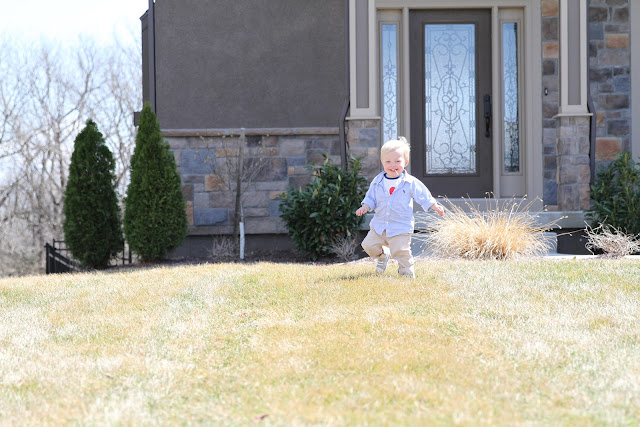 Although Easter was full of family, fun, & lots of food the true meaning of Easter was there with us too. Because of Jesus Christ, and his sacrifice for us, we have the promise of eternal life. And before spending eternity with Him, I get to spend this life on Earth with the two most amazing little boys-the most amazing gift I will ever receive & its all because of Him. God is Good. 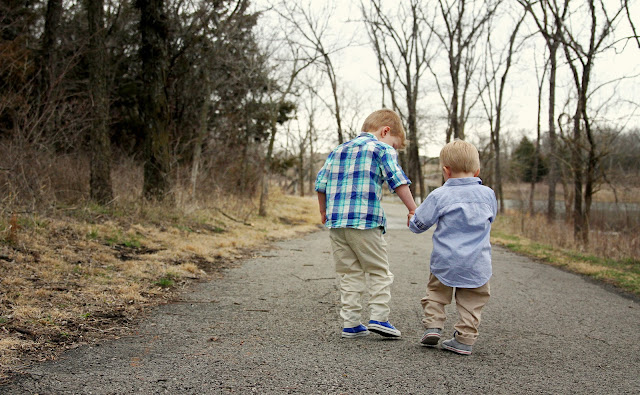 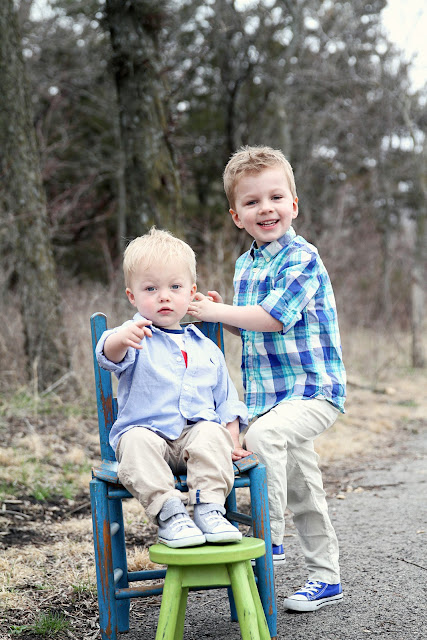 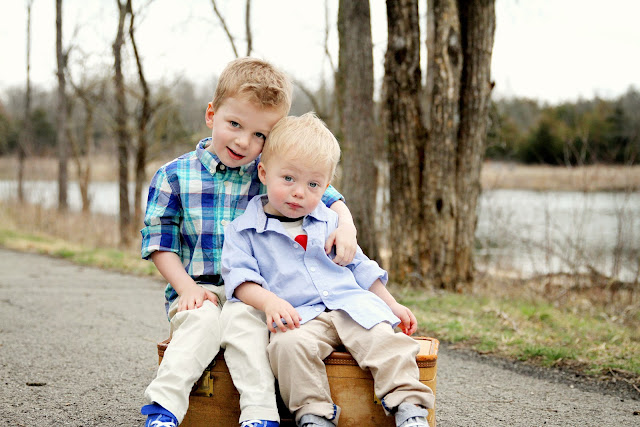