This week brought a lot of cold weather & a lot snow. You'd think I'd be lying if I told you less than a week ago it was 55 degrees outside and we were enjoying the new swing set in the backyard but its the truth. That's Kansas for you. This snow storm might have meant canceling a trip home to my parents & canceling a photo shoot for a dear friend from high school but it also meant that Logan would get his first taste of snow--literally.

But first, we had to dig out the gear. Logan wasn't really sure what was happening as I was bundling him up but as soon as he realized he could still stand & walk around, he was one happy lad. 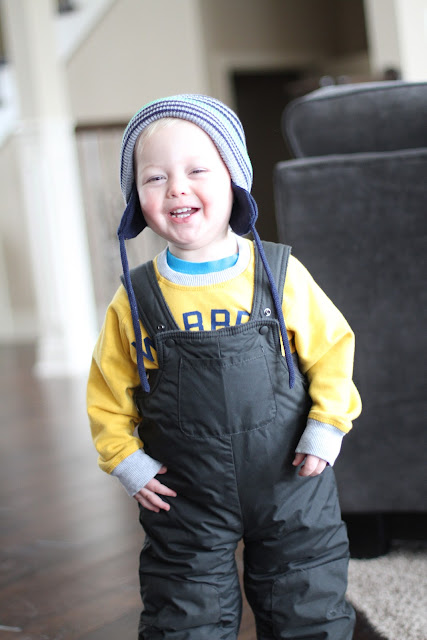 Not to mention, the cutest snow bunny that I have ever laid eyes on. Wouldn't you agree? 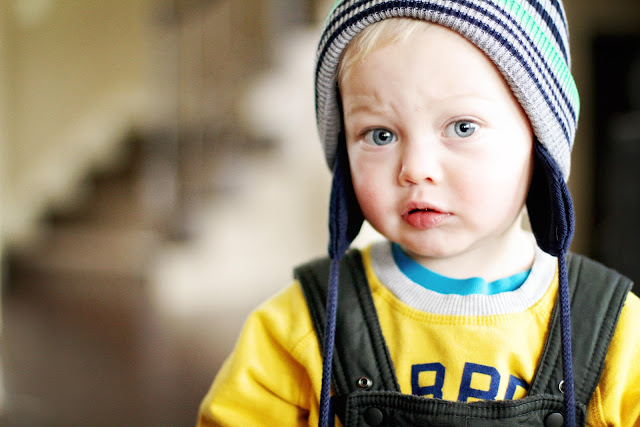 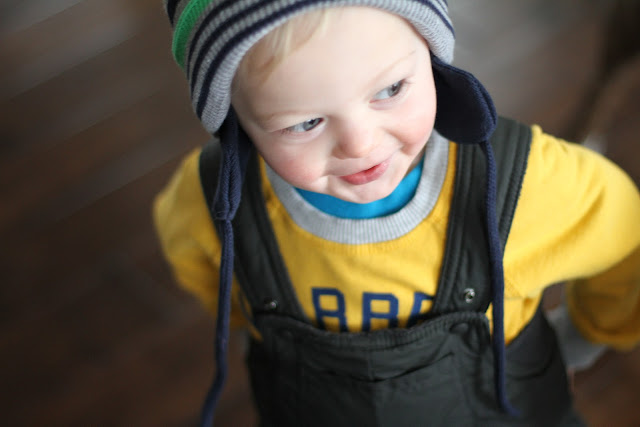 And after I looked and looked for any sort of water resistant gloves but only came up with yet another stocking cap, I realized that these boys have WAY too many hats. I guess since I don't have girls and can't buy lots of frilly dresses and hair bows, I buy hats…But I did save on snow bibs, these were actually Kaden's when he was Logan's age, so I have that going for me.

And now that little boy who use to fit into those tiny little snow bibs, is not so little anymore. He is a fully fledge big kid. He insists on getting himself dressed each morning. He tries telling Logan what he should & shouldn't be doing-although he doesn't follow his own advice. He helps with the laundry and can almost fold better than I can, almost.  He makes me kiss him goodnight at his door now before he closes it and climbs into bed himself--he is just getting WAY too big, too fast. 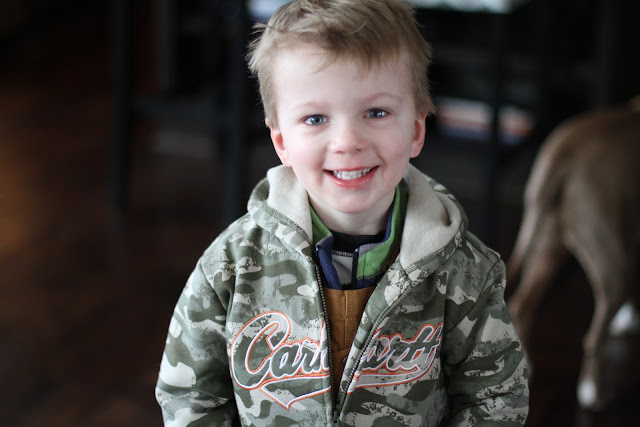 We decided to take the kids out in the snow after they woke up from their naps and most of the snow had subsided-a few flakes remained here and there but the boys certainly didn't care. We took out to the front yard so that we would still have fresh snow in the back yard to tackle the following day. 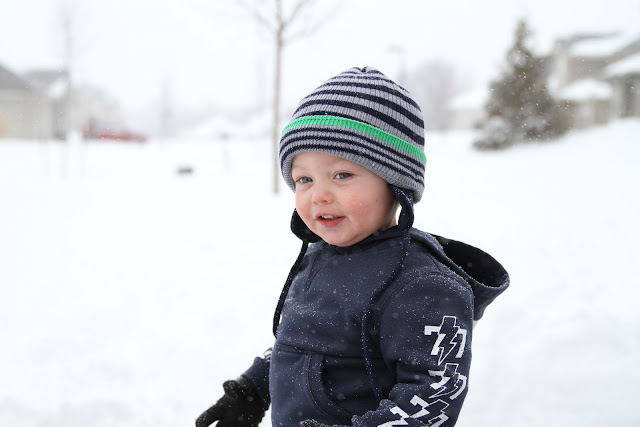 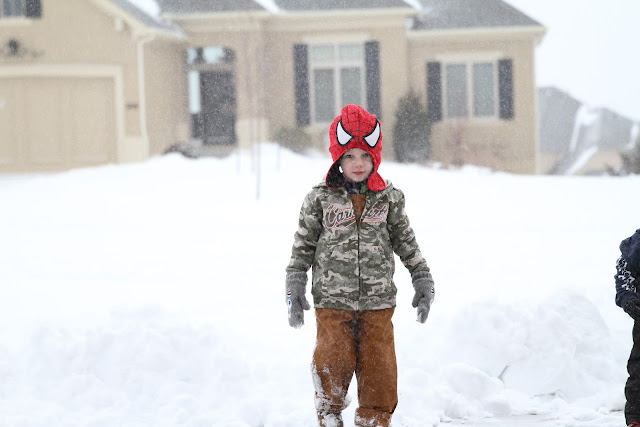 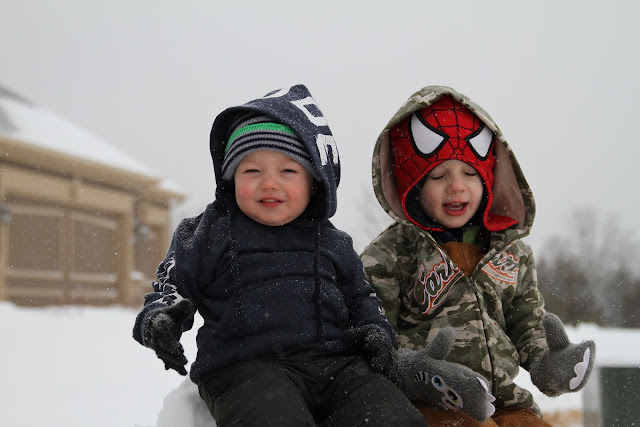 Logan didn't venture too far and wasn't quite sure what to make of it all--that is until I gave him his first taste. From that point on he wouldn't be seen without a little snow in his hands to munch on. I told you the kid likes to EAT!

We lasted about 30 minutes before the kids noses were as red as Kaden's hat and their little fingers were as cold as the snow. It was time to warm these babies up.

Today was a little different. The sun came out and started to warm things up and even melted some of the snow. We didn't need layers and layers of clothes to stay warm, just our trusty hats, gloves and boots. 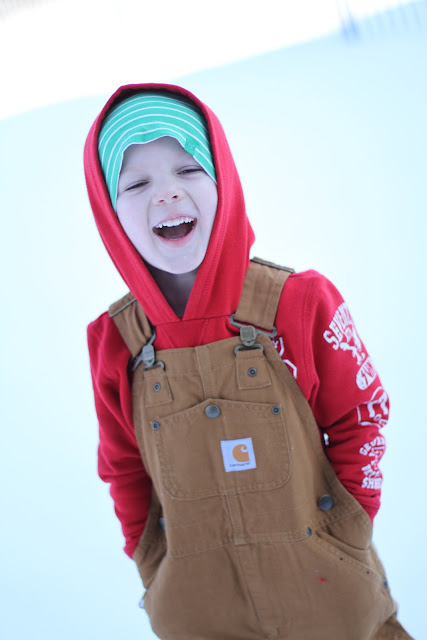 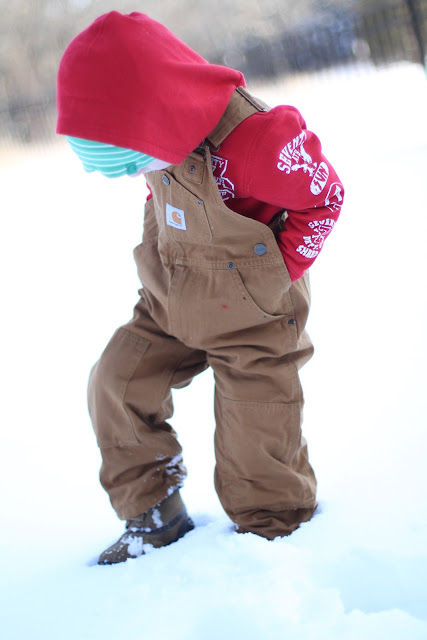 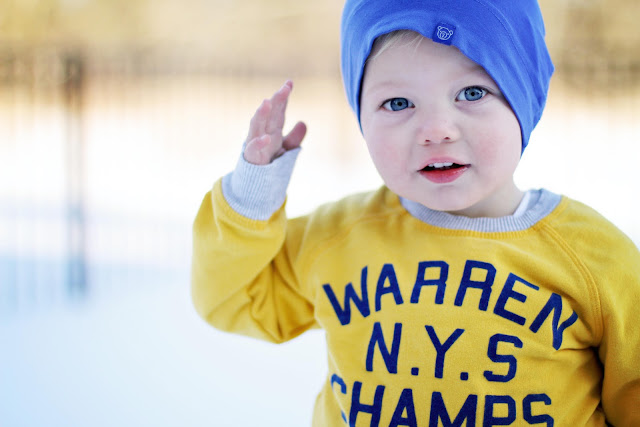 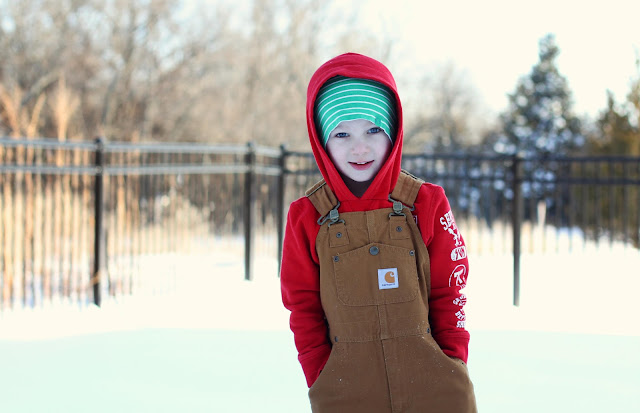 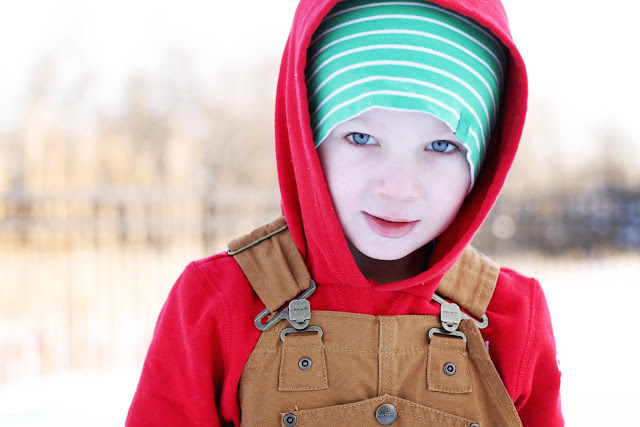 Have I mentioned that Logan likes to eat snow? 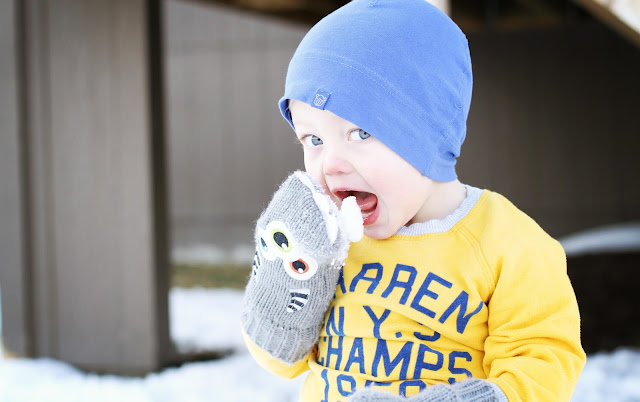 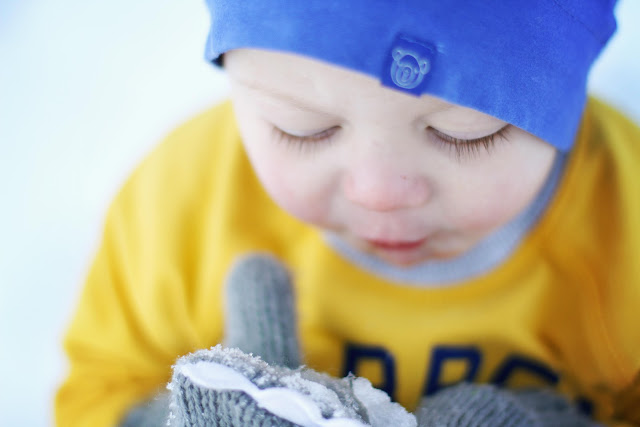 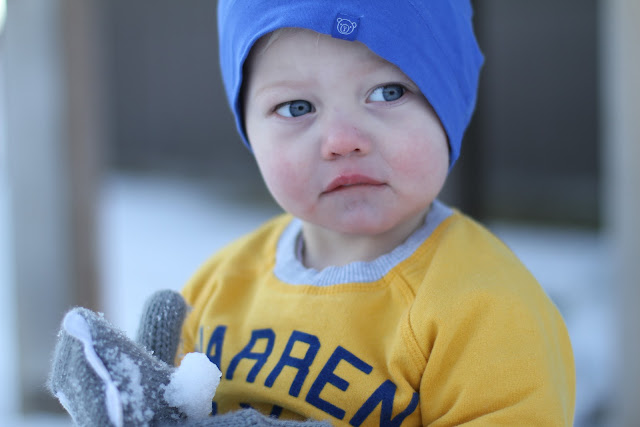 He didn't want to play, he found himself a clean patch of snow and there he stayed put. 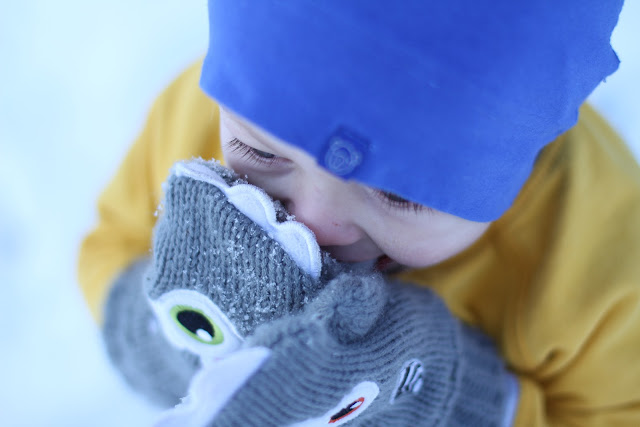 Kaden played on the swings. 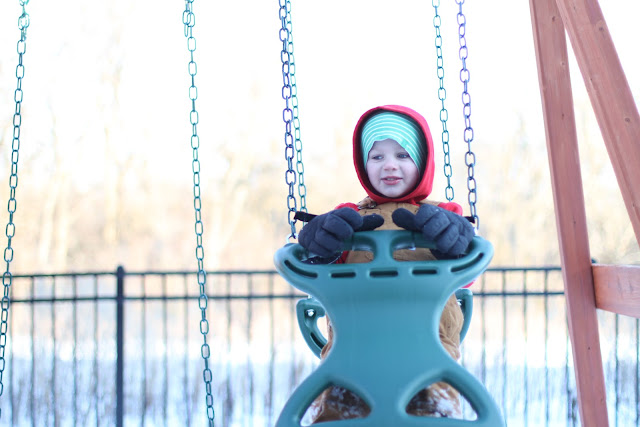 Kaden played on the slide.

and Logan just stood there & continued to eat. Hey, if you are good at something, might as well do it all the time! 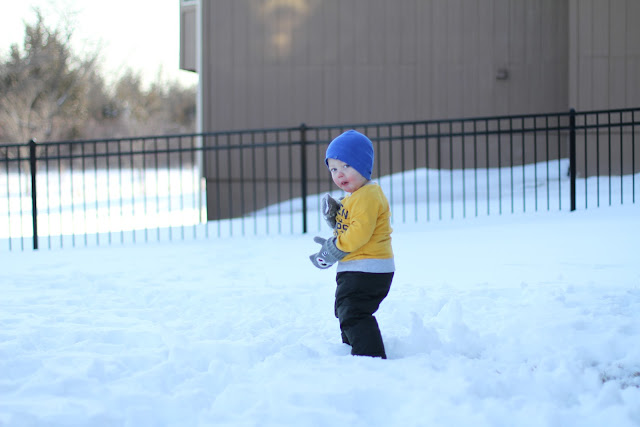 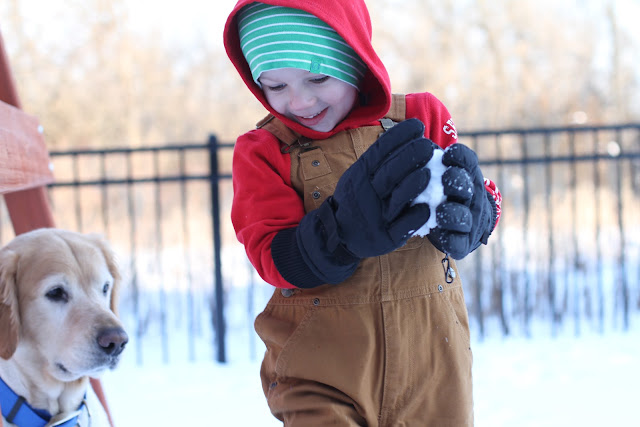 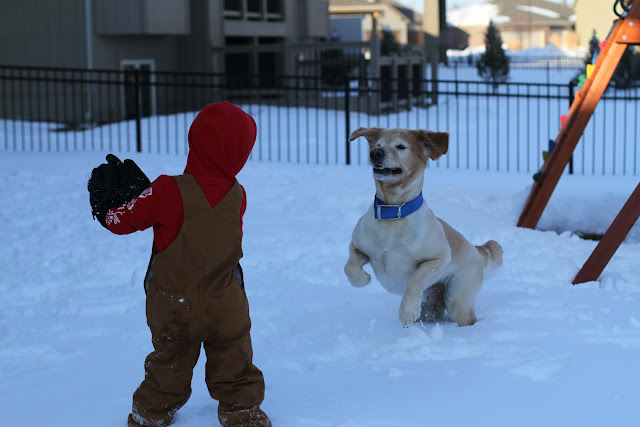 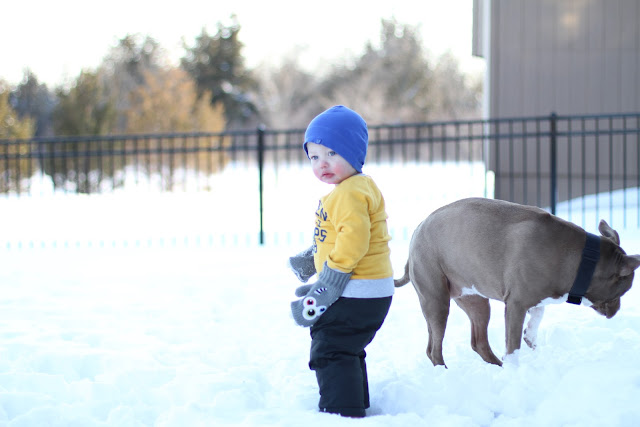 And when I mentioned we only had a few more minutes of play time surprisingly, they both said no. Why would they want to go inside but with a little bribery they gave in. The hardest one to get inside though, BRODI. The other two I was able to pick up and carry over my shoulder, no such luck with this guy. He and Stoli are polar opposites. Stoli couldn't wait to get in, heck she barely got her feet wet but Brodi, he could have ran & played all afternoon. And he loves a good game of snowball fetch. I never said he was the brightest... 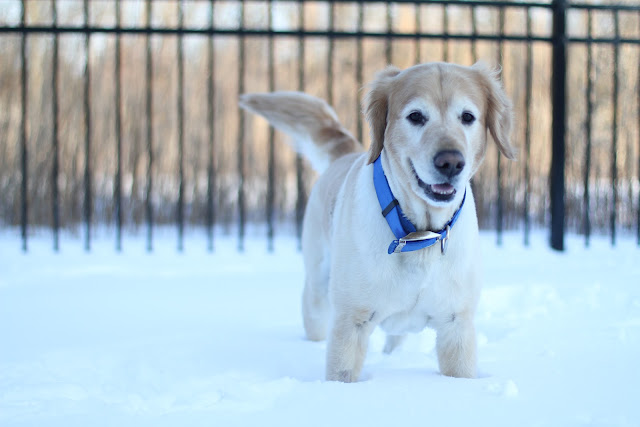 We have tried making the most of the last few days but I won't be upset when we finally get rid of the snow once and for all.  Sadly, round two is said to be headed our way come Monday and I don't think it is going to be as pretty of a snowfall that we just received. Guess there will only be one way to find out, bundle the boys up and let 'em loose.