February has been a busy month & I have missed documenting a lot of our day to day lives so we are playing catch up this evening. A little of this, with a touch of that, one big pot of hodgepodge yumminess--and most of which captured through my phone on Instagram…

First up, we all know February was my birthday month & after traveling for the first couple of weeks of the month I was happy to be home with my boys to celebrate turning THIRTY ONE. Since my wonderful birthday falls smack dab in the middle of winter & going to the zoo (for the most part) & parks are out of the question, we took to Crown Center where we enjoyed walking around Funville. We were excited that Josh, Jodie and Leland met us there and for about 45 minutes the kids ran wild. They could have ran around there all day but it got soooooo crowded, so crowded in fact I feared for my children's lives so I decided to scoop them up & away we went to Crayola World.

Don't get me wrong, Funville could have been a lot of fun had it been a weekday and I didn't work--could have joined all the SAHM and their kids then! 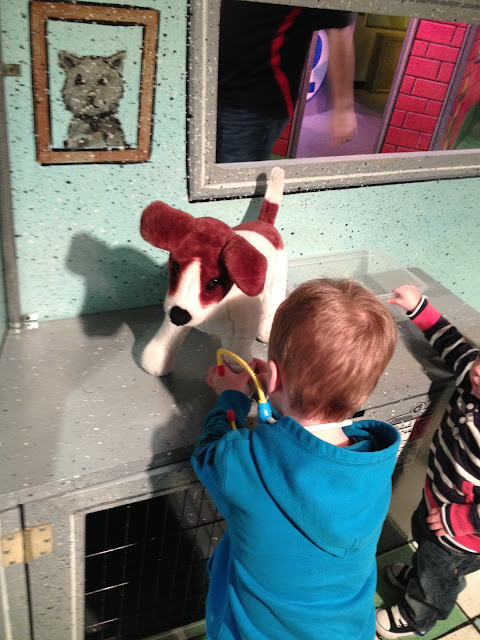 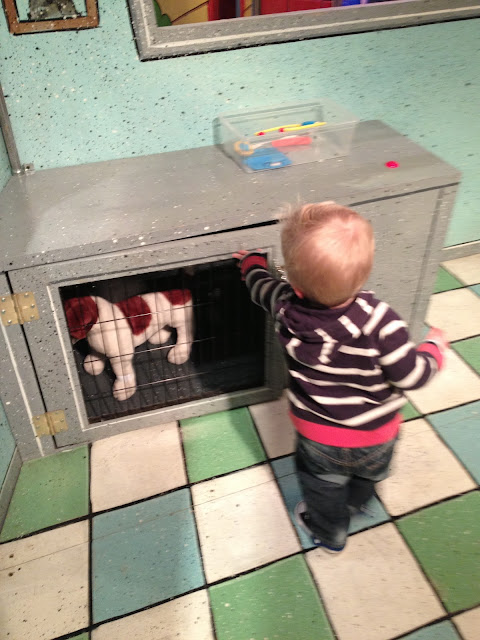 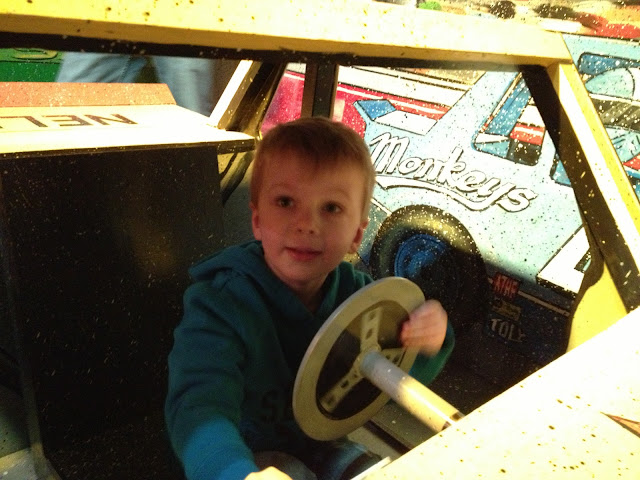 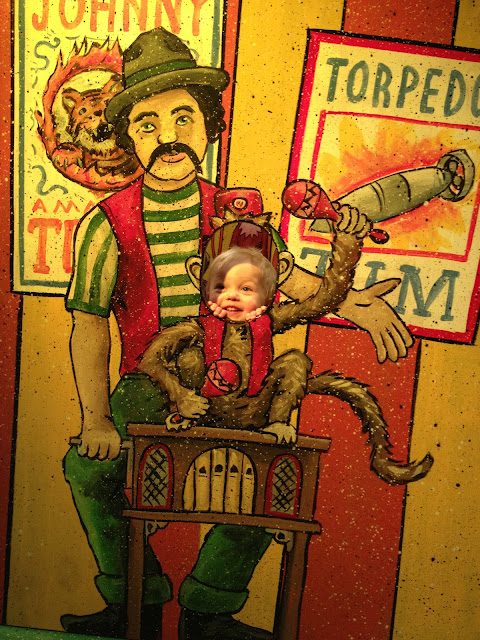 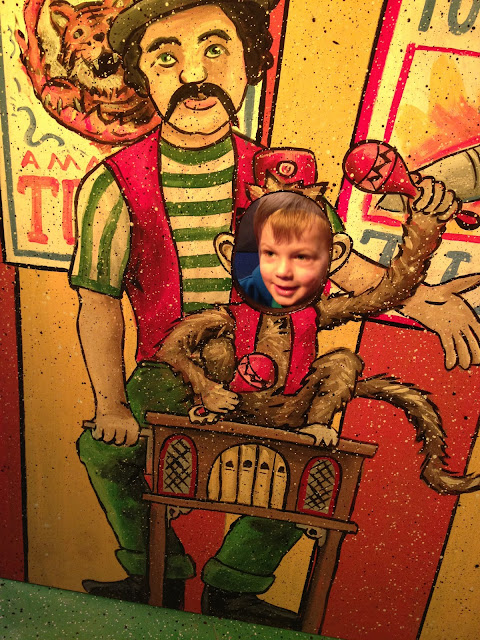 Justin fixed me a number of my favorite things for my birthday dinner and the boys, all three of them,  spoiled me when it came to my birthday gift. I even got flowers from my biggest, littlest man!

A couple of days later we decided to hit up our first Maverick's game and Kaden got to tag a long with us. Lucky for us we mentioned something to the Walshes and they just happen to know a guy who had tickets & he just happened to not be using his, so we ended up with FREE tickets and they were pretty great seats too. And to be honest, there really isn't a bad seat in the house. 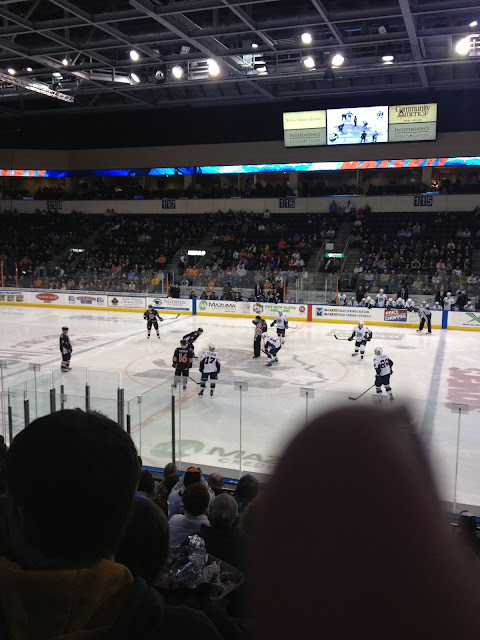 While we headed to the game, Logan got to enjoy some special time with Grammie. The entire trip there Kaden talked about going to the hockey game but he had no idea what he was actually getting ready to see. At first he had his hands over his ears but then he got use to the noise and he was having fun. May have had to go to the bathroom 15 times, but he was having fun. During one of the intermissions we visited the team store and after seeing the price of a youth jersey we left with hat and a cowbell. (We will be buying the new Sporting KC jerseys with Ivy Funds logo on them though---gotta represent!) 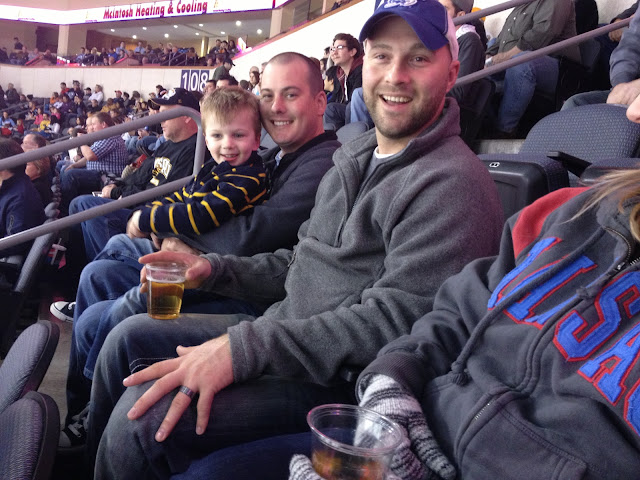 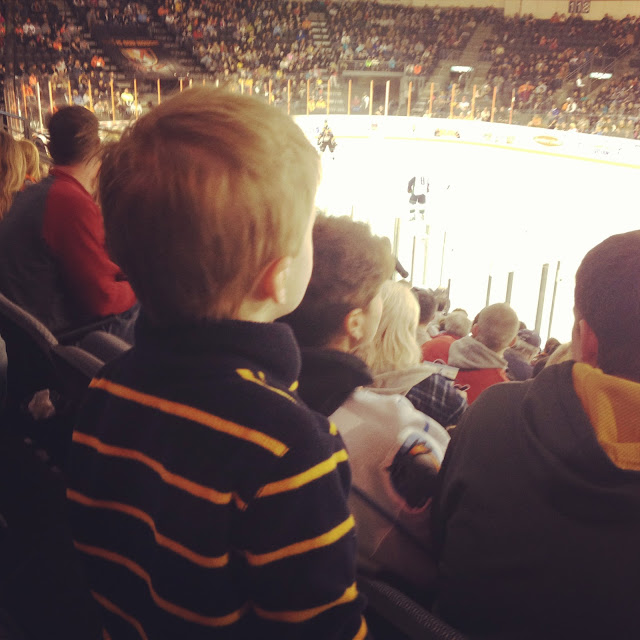 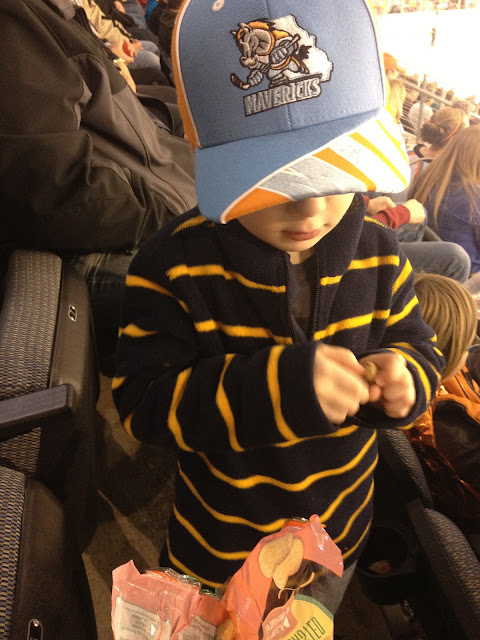 and for the next few days, he wouldn't take the hat off. He was pretty proud of his new purchase. Next up was Valentine's Day & due to the amount of travel that I had during the first few weeks of February, I didn't as creative as I would have liked with the boys' Valentines. Actually, it didn't take any creativity because I saw the ideas on Etsy & from a friend on Facebook and went with it! Is there really any "original" ideas anymore?!?!?

A couple things for our dearest Ms. Brenda... 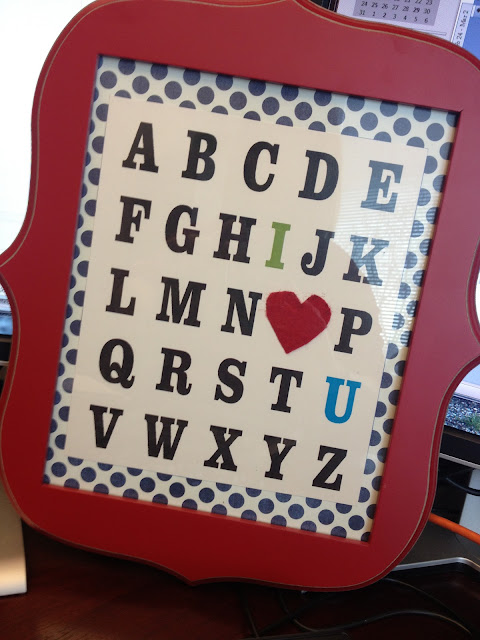 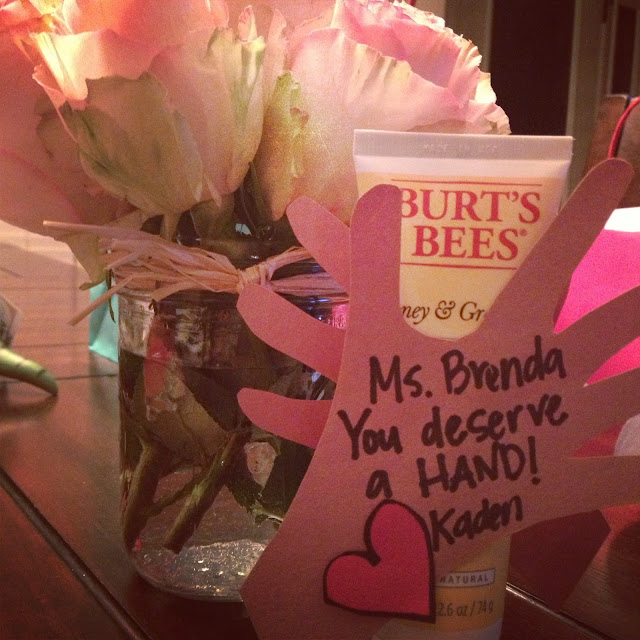 and then a few for the boys & their friends. I am not big on the whole candy thing & I just knew they would already be getting so much so I went the NON-candy route. A little cereal with a touch of DINO. 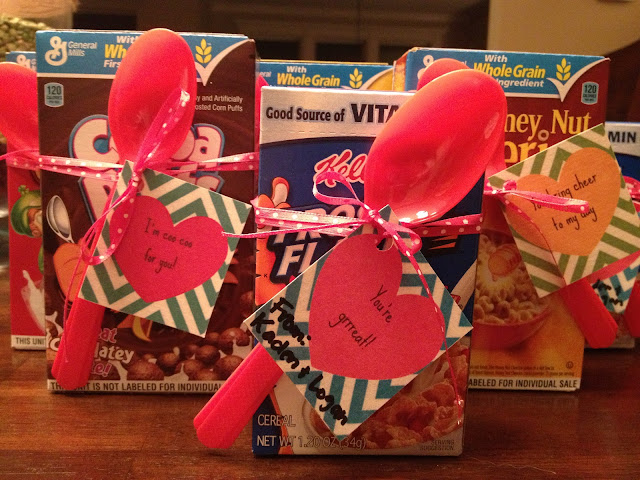 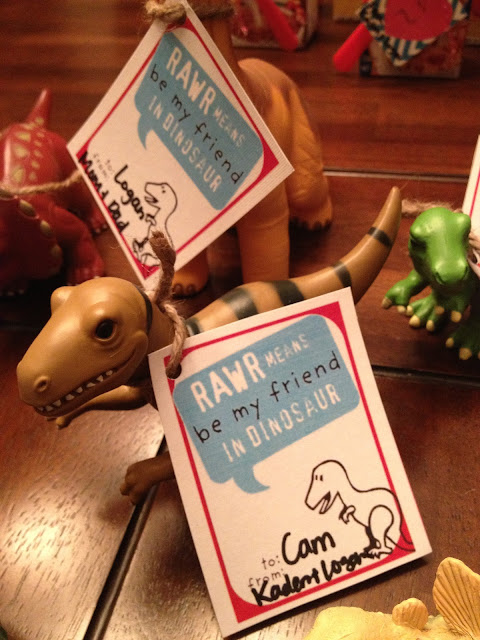 And then there was that night-Valentine's Night & since I was spending my evening with my Valentine, I felt Kaden should have the opportunity to do the same. So we invited Madi (and her family). And for a first date, Kaden didn't do half bad. He treated her to dinner and then a movie. The most important thing, he kept it G-rated when it came time to say good-bye, just a wave, nothing more. 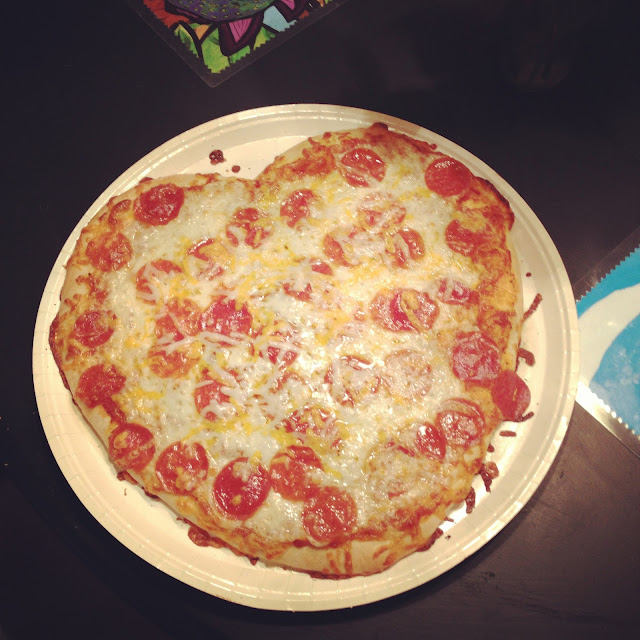 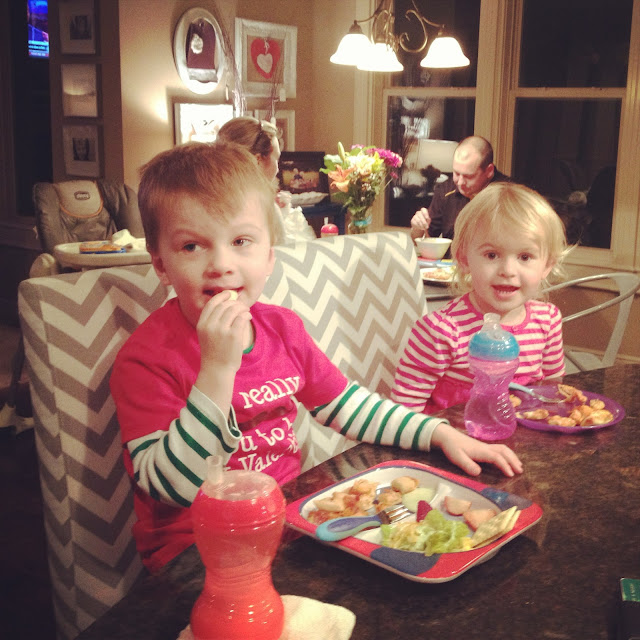 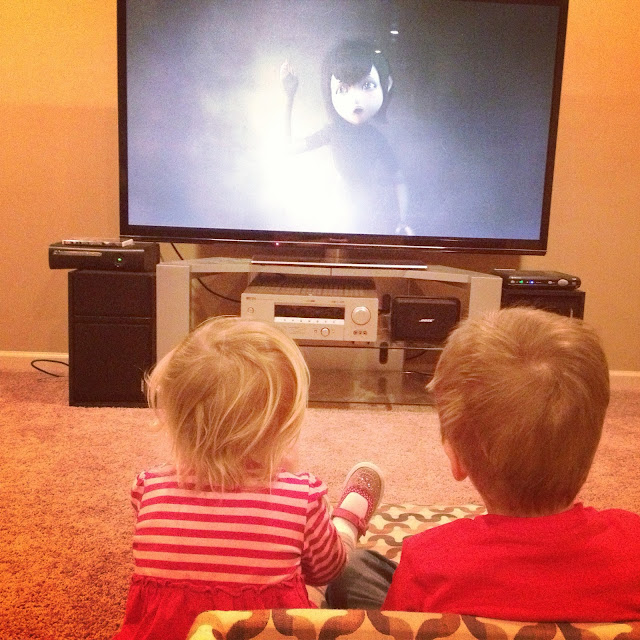 That following weekend we had the swing set installed & enjoyed a little warmer weather which allowed the kids to try it out--but you already know about that! What you may not know about is my little surgery that I had a little over a week ago and getting ready to have again…

I had an endovenous laser ablation procedure done on my left leg--right leg to still to come. They say it is a virtually painless procedure but if you were to look up what they do or how they do it or see the other pictures that I took during & the pictures of the "healing" process--pain would be the first word that would come to mind. The procedure was deemed medically necessary-I have faulty valves-but had it not been covered by insurance, I still would have done the treatment. Here I am at 31 and I have varicose veins--I get to blame them on having children but due to the veins, I wouldn't wear shorts & I hated getting in a swimsuit. And over time, they got worse thus they needed to be dealt with. Each of those black marks on my below leg, well I got stuck there and they removed useless veins from there. And then for the first 24 hours I got to chill out in a full leg wrap. Next up, support hose for 24 hours a day for the next 7 days & now I at least get to take them off at night. But my leg looks like I have been beaten with a ball bat. It is not pretty but the ugliness and pain will be short lived--because my legs are getting ready to look like they did when I was 20--with a little help from 30 Day Shred... 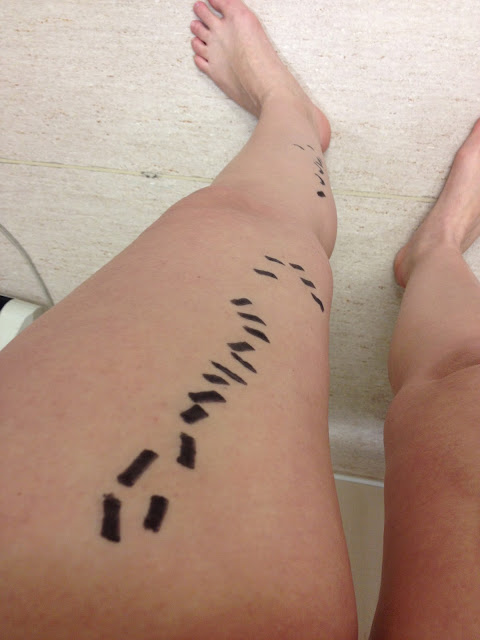 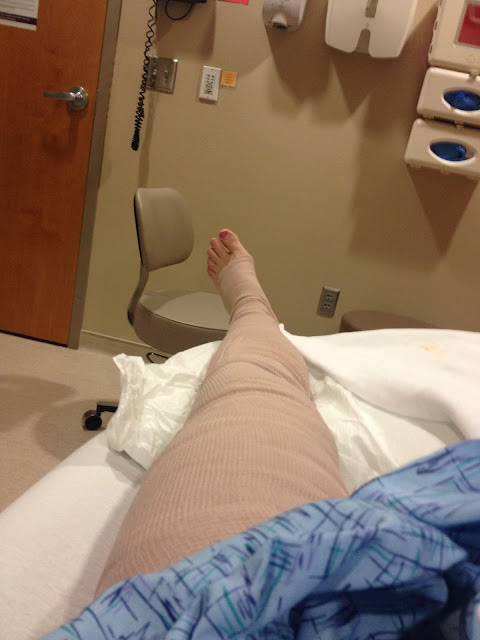 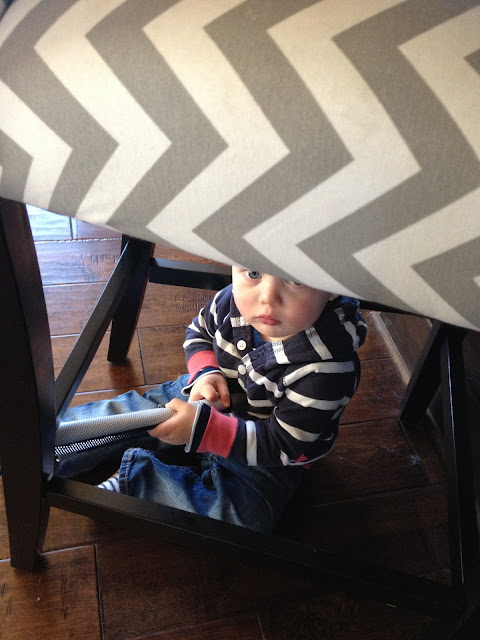 and Justin & I got to go on a boat ride through the Everglades. We got to see alligators of all sizes, even got to hold one & although I didn't think I would, I held a snake too. If a little kid can do it, so can I! 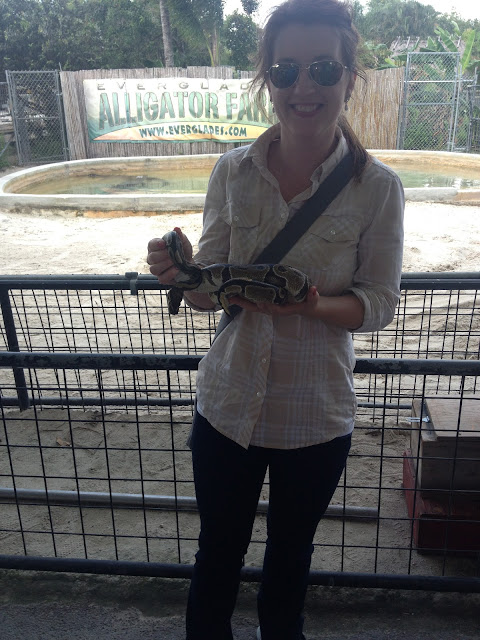 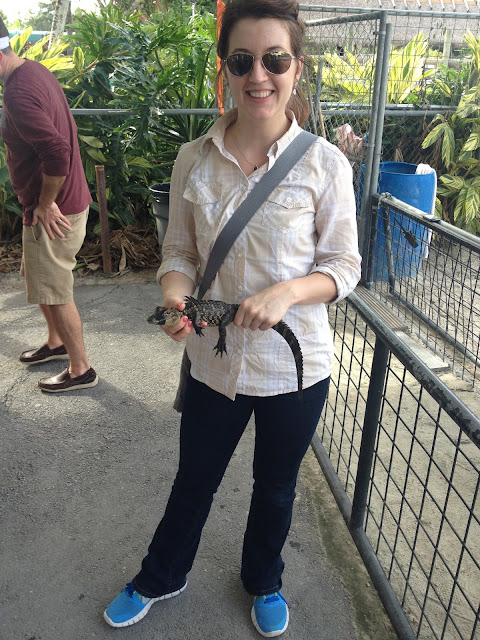 All in all February was a great month & I am glad it brought some great memories but I am soooo ready for the 21 inches of snow it dumped on us to go AWAY! I want to see green grass & have BBQs and & so want to be able to take the boys to the SNAKE parade, St. Patrick's Day just won't be the same if we still have snow on the ground which is TOTALLY possible by the size of the snow mounds around the city. Mr. Golden Sun, PLEASE shine down on us!
Posted by Kayla South at 9:16 PM