Its 6:30 am on the Friday after Christmas & our bags are packed. This would be our first REAL family road trip--the last time we went on a road trip with both boys, Kaden road with my parents and Logan was only about 10 weeks old. This time it was just the four of us & the interstate for 9 hours…

What were we thinking? Why didn't we just fly? It was a tough decision. Both boys have flown but in the end there were a number of reasons why we choose to drive-my "surgery" that ended up being moved to a later date, the need of both car seats & strollers and most importantly we took our dear friends some Okie Joe's BBQ & some Boulevard Wheat. Oh and we know how I like to shop, this allowed for a few more packages to come home with us!

So when it came to packing, I may have went a little overboard. I packed a bag full of snacks-from suckers to fruit snacks to granola bars to anything that just looked fun to eat. I packed wipes for wiping butts, wipes for wiping hands and mouths, wipes for wiping up messes, and individually wrapped wipes. I packed coloring books, magna-doodles, the LeapPad, the Tag, our entire collection of Disney and Pixar movies (minus Robots--not that big of a fan), Superman and his superhero friends & Elmo-can't forget Elmo. We crossed our fingers this would be enough and said good bye to our dear four-legged doggies. Final destination-WISCONSIN, Milwaukee to be more exact.

We climbed in, buckled up the kids and off we went. Justin and I looked at each other and we wondered, how long until the first meltdown, the first "I have to pee?". Well we got to about here… 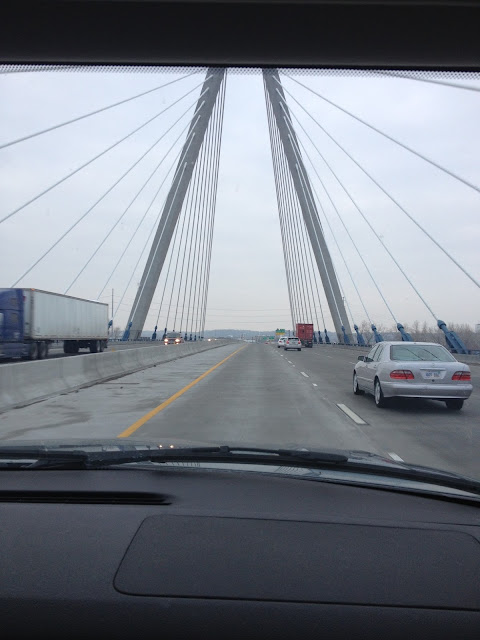 that's right-just north of downtown KC. Things weren't looking so great & I was hoping not to have to dig into the snacks this early but a non-screaming backseat is far better than a screaming one. A fruit snack later and all is fine-Logan is asleep and Kaden is watching Toy Story.

We stopped for lunch about 3 hours into the drive in Des Moines and had our first potty break & let the kids burn off some energy at a playland. Once back on the road they both settled in and continued to watch movies. Logan needed a little extra attention here and there but nothing I couldn't handle from the front seat. We made our next stop in Davenport just before crossing into Illinois-Kaden went to the bathroom again, we handed out a sucker to each and then told them it was naptime. They were both about out & then we made the mistake of shutting the DVD screen & that was the last thought they gave to naptime. Before we knew it we were crossing into Illinois and soon after into the great state of Wisconsin. We had made it and more importantly WITHOUT any major breakdowns. The boys did amazing-they always seem to rise to the occasion. 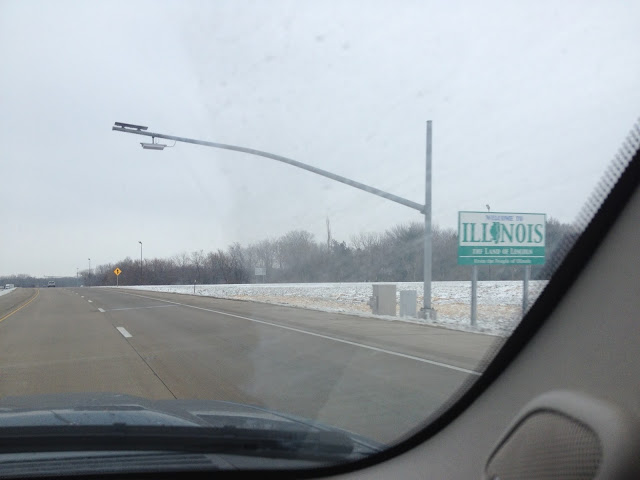 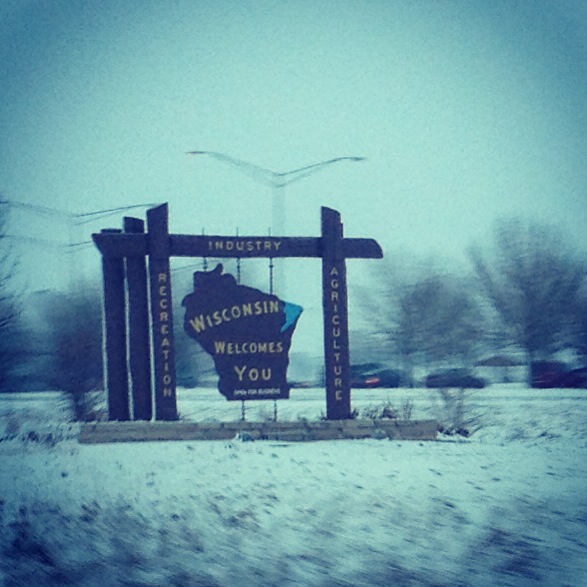 It wouldn't be long now before we were hugging our dear friends who we haven't seen in a year and meeting Mr. Julian for the first. Julian was born last May & we are such horrible friends for not making it up before now… 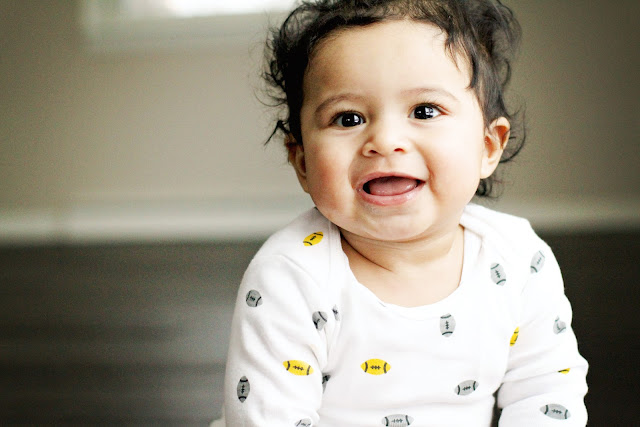 He is the sweetest, most gorgeous little guy & is a spitting image of his older sister. Those Garretts sure know how to make cute babies!!

The first night we were there consisted of saying our hellos, passing around the baby, and getting the kids situated at bedtime. And as easy as the drive was, night time was the exact opposite. Logan wanted nothing to do with the pack-and-play so he slept with us, well on me…

On Saturday we got up and around and headed off to lunch and returned to the house for the boys to take naps. Once they were up Tugce and I loaded the kids up to head to their community center while the big boys headed out to the Bucks & Heat game. On Sunday, the big boys returned the favor and Tugce and I did a little shopping and a lot of TALKING. It was great to get out of the house and spend some time with one of my favorite people, especially since that time is so FAR and in between. We weren't home for 10 minutes and we were loading back up for our annual trip to Organ Piper Pizza. I am not sure what it is about the place but I am hooked. The pizza isn't all that great. They make you pay for re-fills. But by golly, I can't help but smile when I go there. You have an organ player playing away, ducks ringing bells, a ragged doll doing flips and little kids dancing away to the songs. 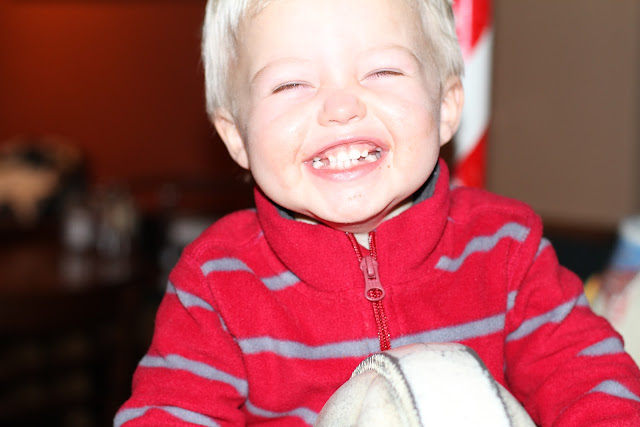 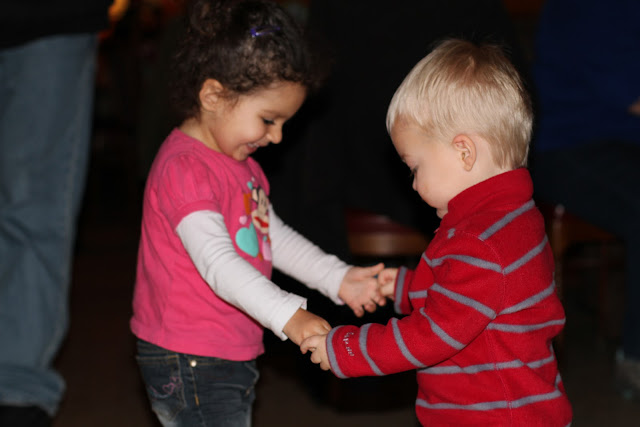 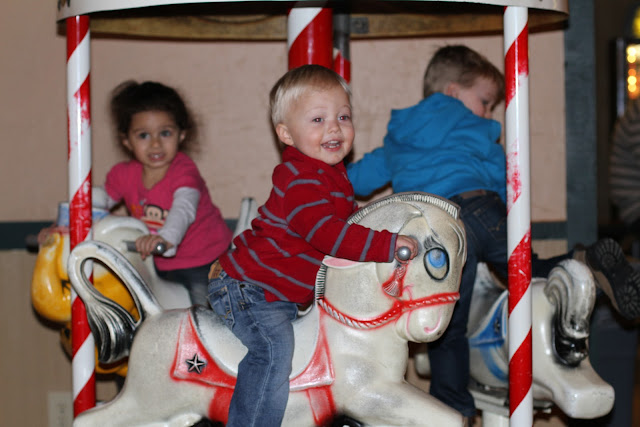 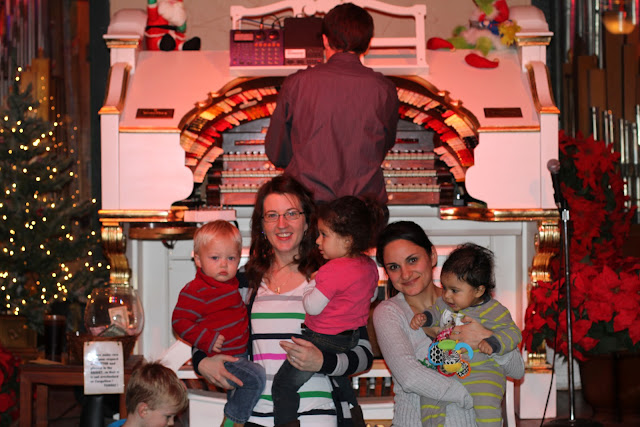 and one said boy LOVED the arcade room. You didn't even need to put quarters in, he was satisfied with demo mode! 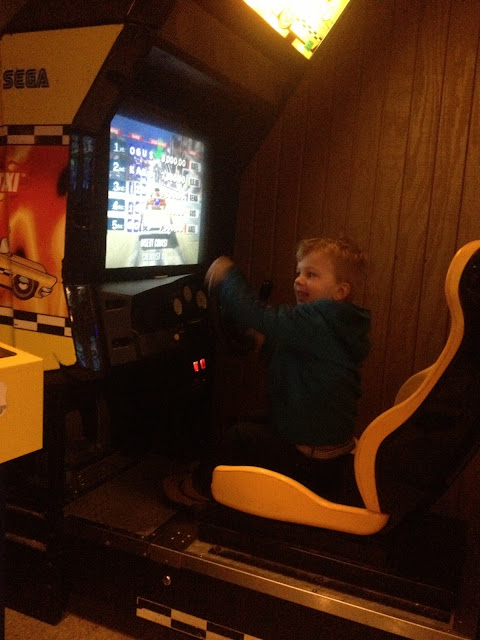 The rest of the trip was spent letting the kids run & play while we did more talking. I know I say this each time we visit our family in Milwaukee but its just so true-I love being with them because its so easy. We don't have to be doing anything CRAZY or always have to be checking something out-we are perfectly content just laying back and relaxing. Plus we get more time with them and their gorgeous kiddos, speaking of gorgeous… 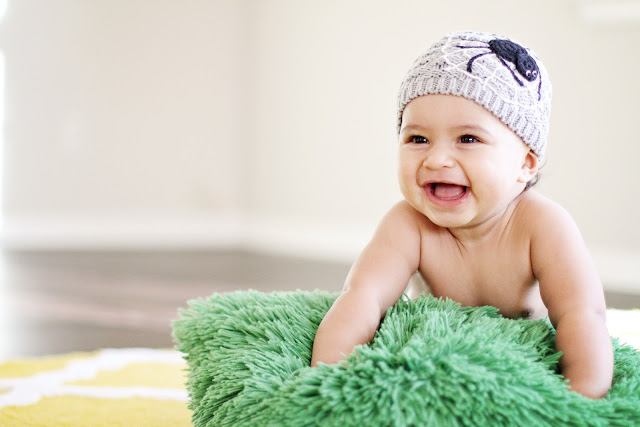 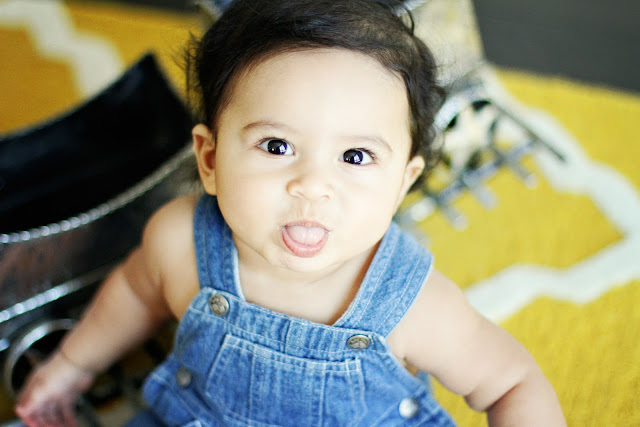 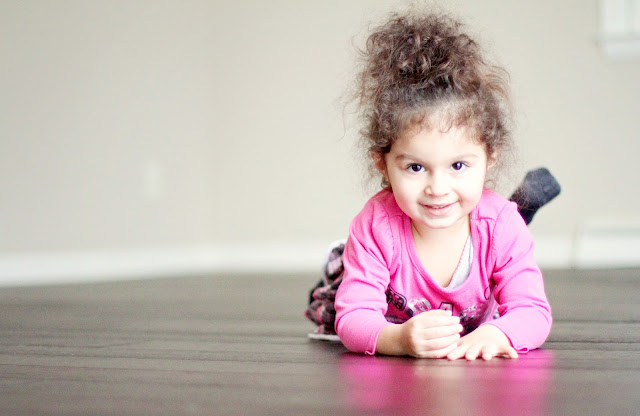 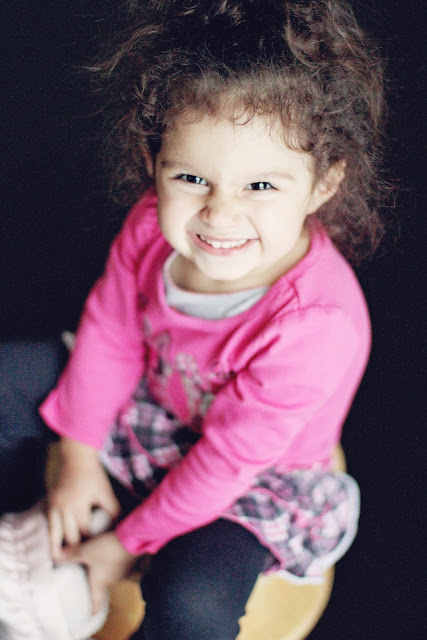 and although Julian is so very sweet, Gisele was my girl. She wasn't too sure about me right off the bat, or any of us for that matter but as soon as she warmed up to me, it was over. It all started when we were sitting on the couch. I sat next to her and she gave me a little look but then Kaden grabbed my hand. Next thing I knew, she was reaching for my other hand. From that moment on, she wasn't far away. I don't even let my own kids sit on my lap while I am trying to eat but her, she got to almost every time! 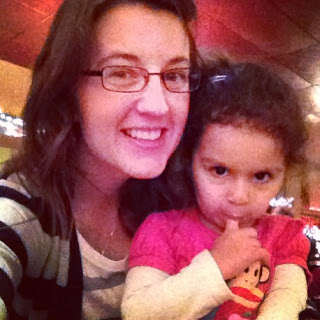 And on the night where most of the world was partying and ringing in the New Year, we were right where we wanted to be. Watching the kids chase after one another. Eating an amazing dinner & then waking up to the fireworks that were being shot off on Lake Michigan. We might not have "seen" midnight but it was another great start to 2013. 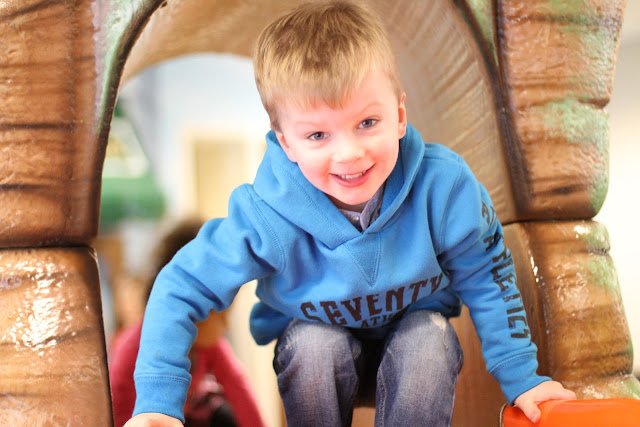 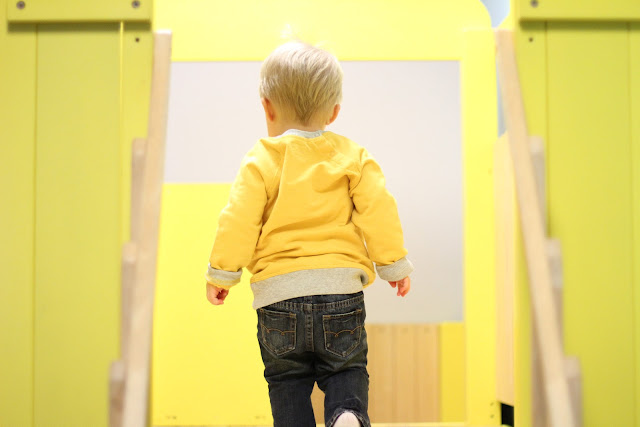 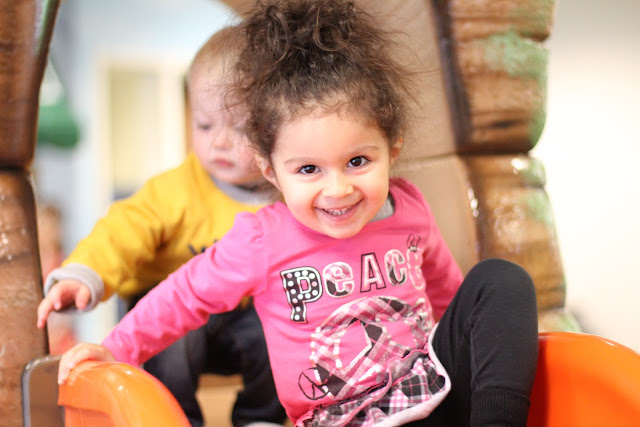 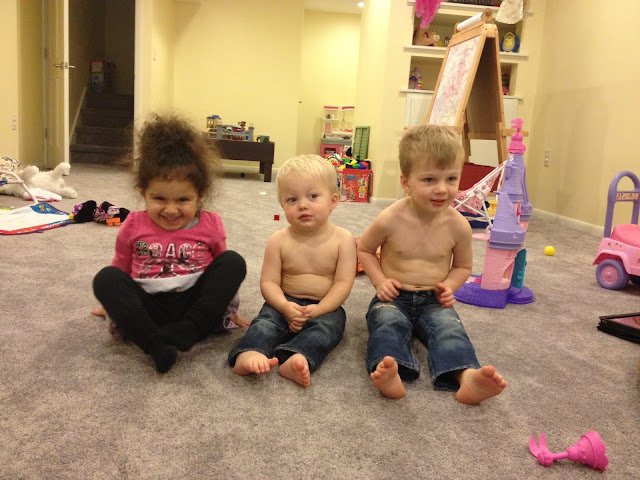 And just like last year, it was hard to say good-bye. Not knowing when we would see each other again but promising we wouldn't let another year go by. We loaded back up in the car-this time with fewer snacks-and started our adventure home. And as great as the first leg went, this leg went even better. Our kids are troopers. My husband is a rock star and drove the entire way. 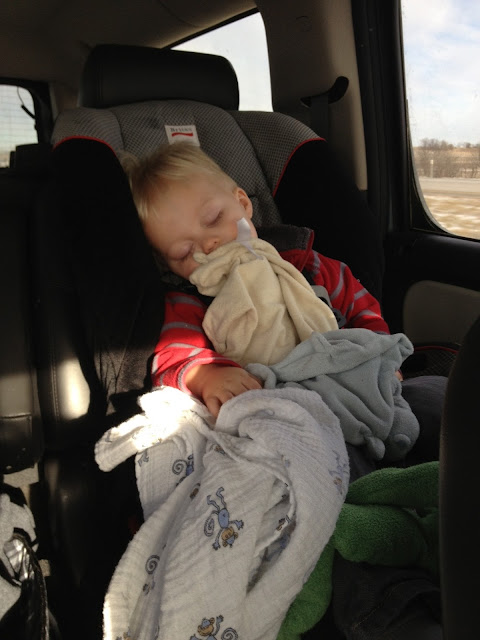 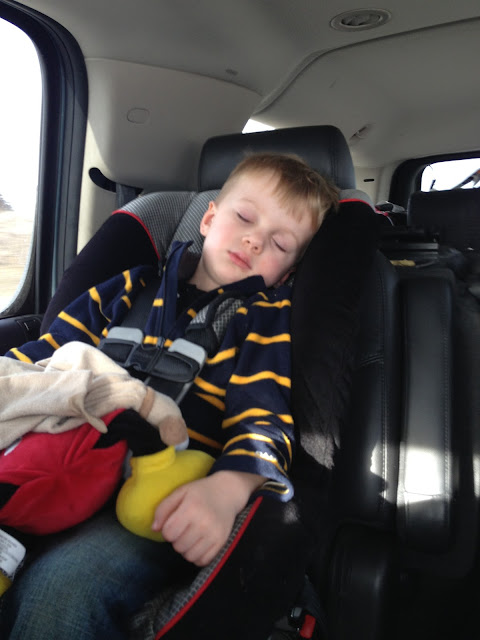 Now that we have our first trip out of the way, they better be ready for visitors. Who knows, we might just have to take advantage of a few three-day holidays coming up!! Love you guys & miss you all so much already. Thank you for your hospitality, opening up your new home to us and being such great friends.

And speaking of such great friends-we had a few back here in KC that helped us out why we were away. A BIG thank you to the Berbs & the Johnsons for coming over and spending time with our dogs each day. I know they loved the extra attention that you guys gave them and it made me feel much better to know they were with people who love them like we do!