Kaden is pretty good at stalling when it comes to bedtime. And if I would let him, he would brush his teeth a thousand times just to prolong the inevitable. So when it came to the dentist, I wasn't really worried about how his teeth would look, more so about how he would react.

So I figured that I would let the little guy tag along at my next dentist appointment so he would know what to expect. Now, I am no fan of the dentist and I have an AWESOME dentist. I'm not sure what it is about them, maybe I was scarred as a child but for some reason I sit there and just clinch my hands around the arm rest. But not this time. I had to be a big girl and show Kaden there was nothing to be afraid of. I guess I must have gotten the job done because as soon as I was finished with my checkup, he was up in the chair, going for a ride… 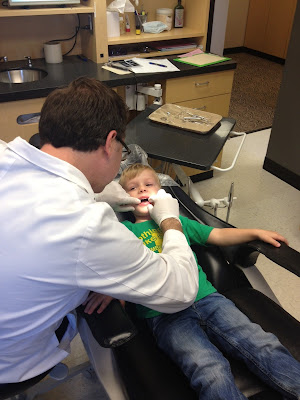 He did great--so what if there weren't any drills or a cleaning involved. He at least wasn't clinching the arm rests like his mommy normally does!

So here we are 3 years and 4 months and still haven't made our way to a REAL dentist appointment. It was time but I was torn between taking Kaden where Justin and I go, or finding a pediatric dentist. He probably would do just fine at our dentist and again, we have an AWESOME dentist but growing up, I went to a pediatric dentist (although I don't recall him being called that)! What I do remember is that his name was Dr. Rosenberg and when you pulled into his office there was a huge whale out front. It had a super cool playhouse inside and each room was decorated in something different. Last but not least, as you walked out you got to stop by this huge treasure chest and pick out a toy. They made going to the dentist as much fun as one possibly could.

So I decided, if I could find someone or someplace that could come close to the experience I had, I would. I had heard great things about Jenkins and LeBlanc but just never made the call. Finally a friend posted that she took her little boy and that he did great & more importantly, they were great. I had procrastinated long enough-made the call right then and there. They had an opening two days later & we took it.

We walked in and you could tell they knew exactly what kids like. They had video games in the waiting room. They had multiple TVs and little areas for kids to climb up, plopped down and watch some toons. It wasn't but a few minutes later and we were called back. As we were being escorted back to an area with multiple chairs, the nice lady was asking Kaden all sorts of questions. When she pointed out the chair that would be his, he jumped up and waited patiently. She talked him through EVERY instrument & he got to feel each one. He even got to watch her squirt water on the floor before squirting it in his mouth. Before I knew it, Kaden was reclined in the chair and she was polishing away at his teeth. 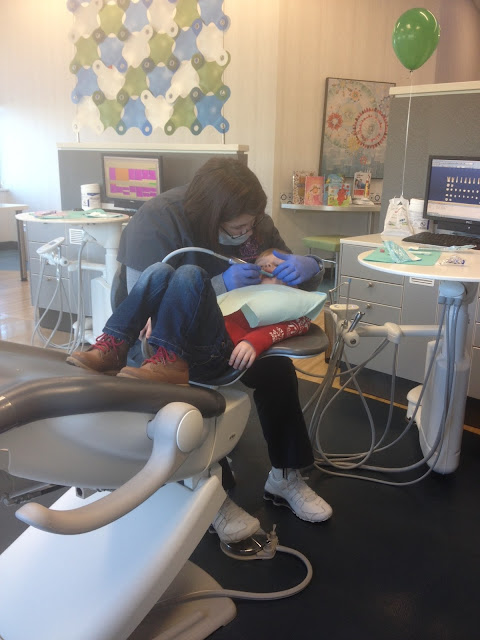 After the polishing was done, they gave him a token to spend in their toy dispenser. Up next were the x-rays. Once again, he climbed up in the chair and did exactly what they asked-even providing a little commentary here and there. X-rays were over in no time and they gave him another token to get another little toy-the kid was in heaven as he sat there waiting for the doctor to come by. 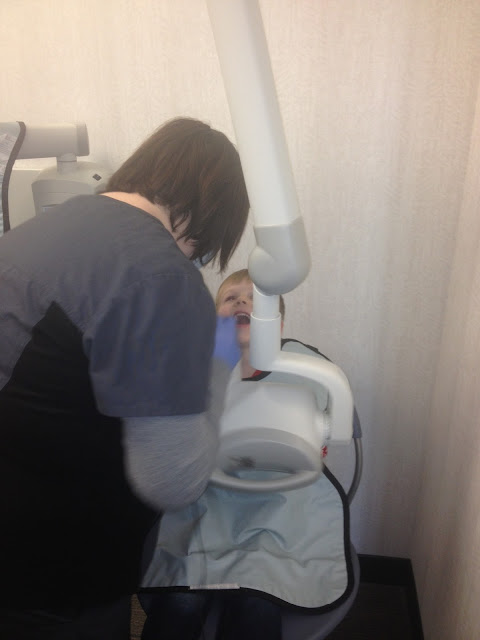 She finally arrived and as nice as the dental hygienist was, she was even nicer. She was high-fiving Kaden and after she was done looking over his teeth she declared that he was EXTRA special. --Yes, we already knew this but thank you for confirming it!-- Kaden had 21 teeth instead of the normal 20 teeth for a toddler. One extra tooth on top but luckily for us its a baby tooth and it is perfectly in line with all his others. No need to pull it, he'll just lose it on his own. And the better news-he has the right amount of permanent teeth and they look great!

And just when we thought our first trip to the dentist had come to an end, Kaden got another surprise. ICE CREAM. Yes, you heard that correctly-they give out ICE CREAM to their kiddos. Better than all that hard candy that sticks to their teeth or so they say!

So 2 toys, a cup of ice cream, & a balloon later and they gave this kid a reason to want to come back and see them in six short months. Just not sure he wants to wait that long. Job well done Jenkins & LeBlanc. Job well done.