I don't mean to be biased but my family has the BEST Christmas gathering. Maybe its the fact that I don't get to go home as often as I would like. Or maybe its because I don't get to see my neices and nephews as much as I would like. It could be the amazing food, the family naptimes, or the fact that my boys are spoiled rotten by their Papa Tom & Grandma Sara. Actually, it may just be ALL of these reasons.

Since this holiday fell during the week and schedules were a little tight we decided to have Christmas on Saturday evening-after Officer Hartley was off duty. It might not have been the most convenient for my brother but it allowed me and the boys to spend an extra 2 days at home, being waited on. Thanks Zack. Before heading off to my mom and dad's though we have a quick little mini-shoot with the boys in front of our Christmas tree.

--it may seem as though I have a number of mini-shoots with my boys and the truth is, I do. You just never know when they will cooperate so I try every chance I get--

And within a few snaps of the camera, I captured this. 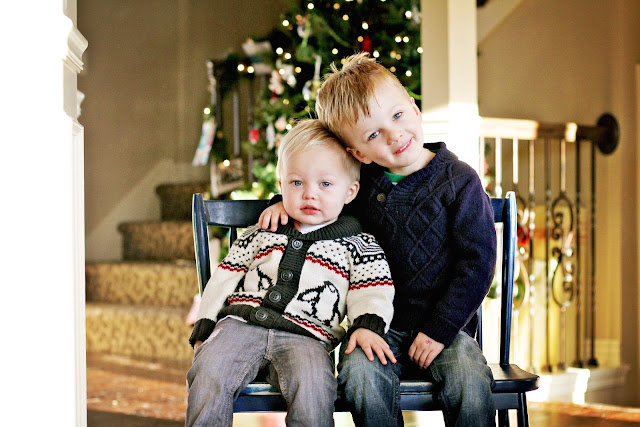 and then in a matter of seconds, it turned to this... 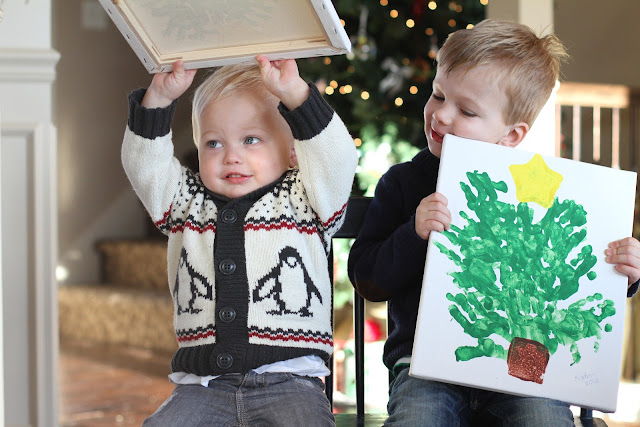 and then Logan wanted his very own turn. 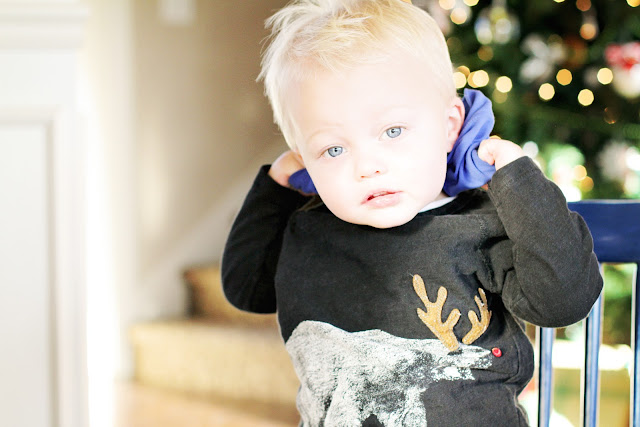 We then loaded up and headed home. It was a pretty long 2 hour drive-Logan wasn't tired & certainly wasn't wanting anything to do with his car seat. We went through a number of suckers, snacks and peek-a-boo games before we FINALLY pulled into my parents' drive. As we unloaded the gifts Grandma Sara took the boys for a little nature walk. 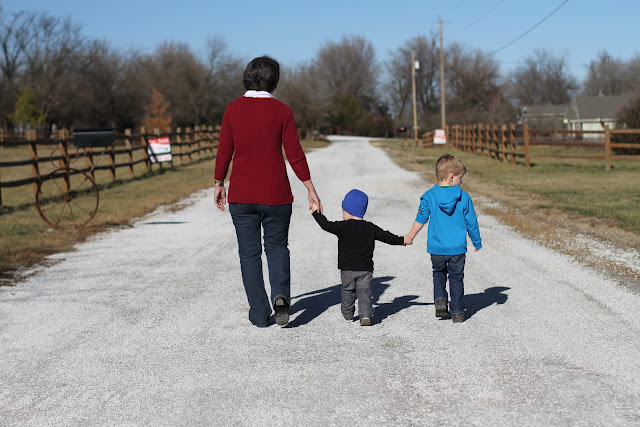 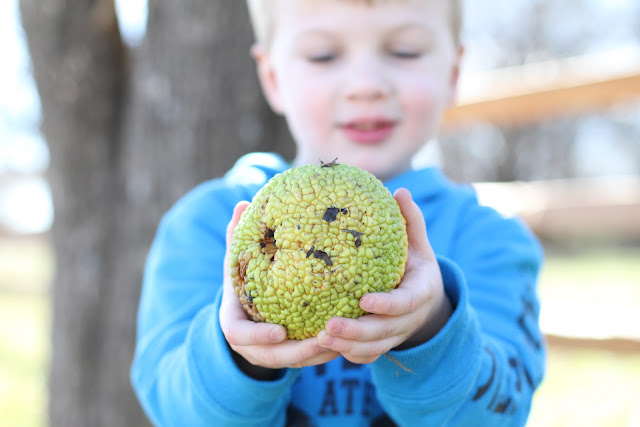 But the real fun came when it was time to open our traditional first gift-Christmas pajamas. Since we were doing Christmas a little different this year and opening presents up at night we decided to have all the kids in their pjs. What a lively bunch of kids we had too! 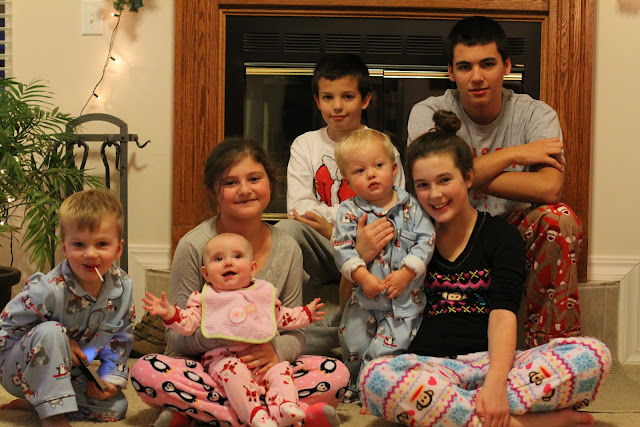 Its hard to believe that the oldest is now 15 and the youngest just 5 months old. I still remember when the big kids RAN to their Aunt Kayla with arms wide open ready to give me the biggest hug they had. They might not be running to me any more but they are still willing to give hugs.

After our VERY quick and not so great pj photo Kaden assisted Leah in handing out presents. Once all the presents were handed out the little kids took turns opening. Kaden was really excited when he unwrapped his new Spiderman house & Logan's eyes were HUGE when Grandma brought our his new four wheeler. 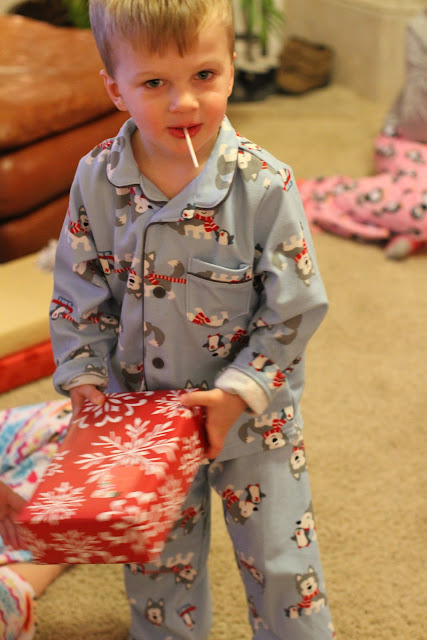 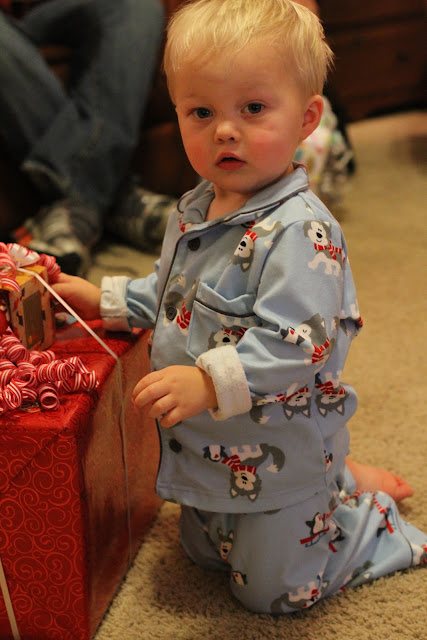 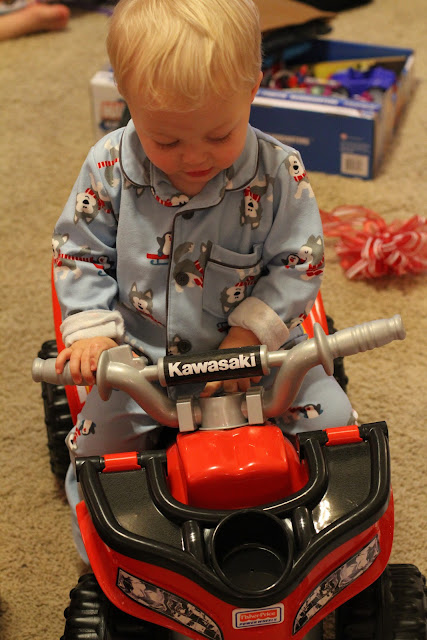 It didn't take too long and Logan found his place for the night-right next to his daddy. 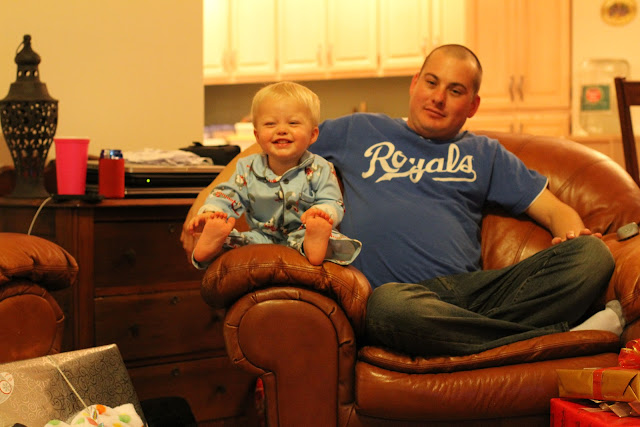 After all the kids opened their gifts and the wrapping paper was all picked up we spent the next few hours playing with all our new stuff. The gift of the year went to Blake, he got a super cools bow & arrow that shot out nerf darts. This was no ordinary bow & arrow, it was pretty high powered & I won't lie, it was a lot of fun to shoot. All weekend long we kept trying to one up each other as we vied for that coveted sharp shooter title & in the end, I didn't win. I think they all were plotting against me because every time I picked up the bow & arrow a kid would be attached to my leg!

The rest of the weekend we did more of the same. We played. We talked. We napped. We did family. The only negative to the entire weekend--besides Uncle Zack having to work and Daddy having to leave to go back to work--was the fact that it had to end. I could have easily stayed for another week or two-not sure my mom and dad would say the same when it came to cooking for all of us but boy did we have a good time. Makes me wish Christmas came every month, then again, if it happened monthly it probably wouldn't be as special as it is. And you know what, its weekends like these that make me want to have more kids-to be surrounded by all the noise, laughter, & most importantly the love.

I have a ton of Instagram and iPhone pictures to share and hope to have the all posted tomorrow as we start our End of the Year Adventure. Wish us luck, we'll need it!
Posted by Kayla South at 10:42 PM