For the first time this year we are able to use the "Santa is watching" or "Elf is watching, make good decisions or you might not get your RED bike." Most of the time, it works. Sometimes, nothing works. But in the end, I am pretty sure that Kaden will make Santa's NICE list & will be very happy come Christmas morning.

And yes, I did say "good decisions" vs. "be a good boy". We try and make a very concerted effort and not refer to Kaden as being a "good boy" or a "bad boy". We want him to know that there are good decisions and bad decisions but just because he makes a bad decision doesn't mean he is a "bad boy". You just never know what sort of things may stick with your child...

But back to our list. Two things on our list this year were to visit Santa and sit on his lap & to bake some holiday cookies. Both things we were able to check off our list over the past couple of days.

On Sunday, Justin got in the baking mood. He pulled the dough together & Kaden and I went to rolling the dough out & cutting out the fun holiday shapes. Logan pretty much just ate flower and kept a close eye on the dough… 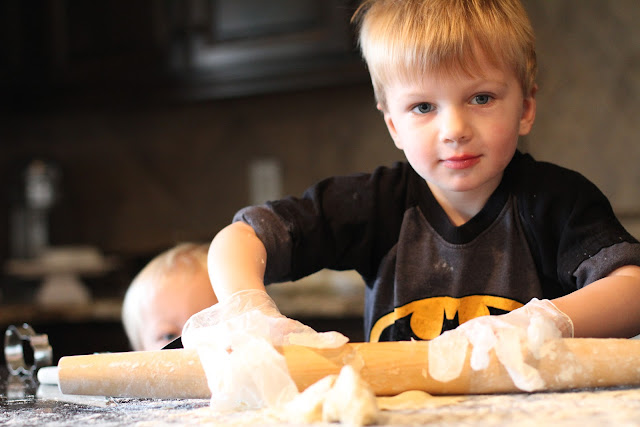 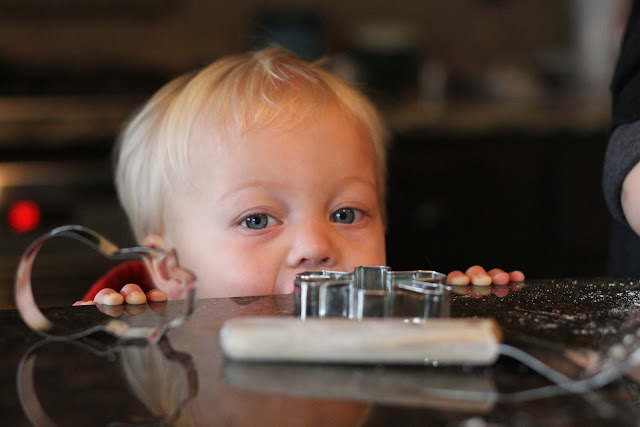 I had to run out for a newborn photo shoot and the boys had to take their naps so we left the icing and decorating for a little later & boy am I glad we did. Grammie showed up and took over. Her patience with my boys, especially Kaden, is next to none. Kaden listened to her directions and he sprinkled till his heart was content. For every one M&M button that he added to the snowmen, he ate two and shared one with Logan. Needless to say, we went through a few packages.

It was such a joy to watch the boys in the kitchen with their Grammie baking holiday treats. Everyone was smiling and having such a great time. Baking should be an every weekend event & you better believe we will have another baking event at Papa Tom's & Grandma Sara's during our extended holiday stay. So get out the cookie cutters and the sprinkles and make sure to have lots of wipes cause these boys don't mess around but they do make a MESS! 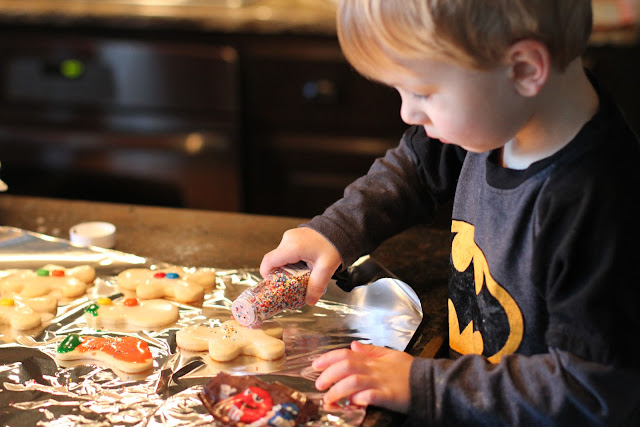 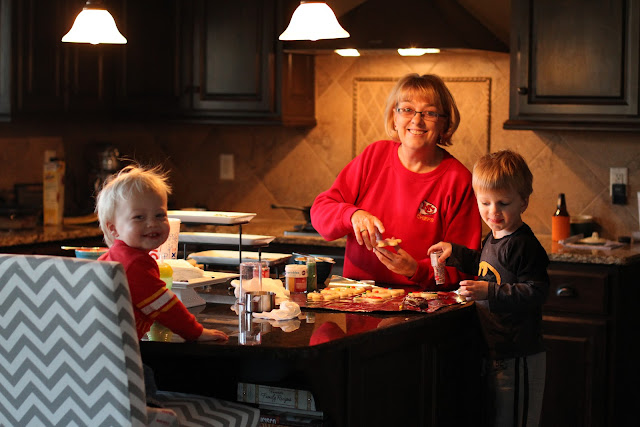 Last year I was that mom. The mom that didn't take her kid to see Santa. He wasn't really into costumes during Halloween and frankly got quite scared so avoiding Santa was probably a good thing last year. This year, its a whole different story-he talks about Santa. He waves to the giant Santa outside of 78th and Metcalf every morning on the way to daycare. So we knew we needed to take him & these family adventures are the type of things that I like to spring on my husband.

Monday morning I told Kaden that if he had a good day at daycare and listened to Ms. Brenda that we would go and see Santa. He instantly ran and told Ms. Brenda about going and seeing Santa. When I picked them up later that day he came to greet me and proudly told me he had a great day and that he made good decisions. Ms. Brenda confirmed. He turned to Sophie and told Sophie that we were going to see Santa and low and behold, the Berberiches were headed to see Santa too--so we of course made a night of it.

We started off with a little Oklahoma Joe's BBQ (which I could eat daily, maybe twice a day) and then we headed over to Bass Pro. Knowing that Bass Pro offered free pictures with Santa and lots of fun activities I was a little worried that we would be in line FOREVER but I was presently surprised. We arrived and got the 7 o'clock pass & since the line was a little long (straight up 7) they suggested that we do a few activities. Kaden was all over the Merry-Go-Round and only had eyes for the Moose. (pretty sure thats because I have decorated his room with a few Moose pieces-one moose head and then the softest Moose sheets I have ever seen--not that I have seen a lot of Moose sheets though!) Anyways, we jumped up on the Moose and he patiently waited as all the other boys and girls found their animals. His smile just grew & grew as we started to move and pick up more speed. He waved the biggest wave as we passed by Daddy and Logan each time. At one point, he gave the Moose a little rub and said "I love this Moose, Mommy". That kid can just be the sweetest lil' booger & he just melts my heart over & over again. 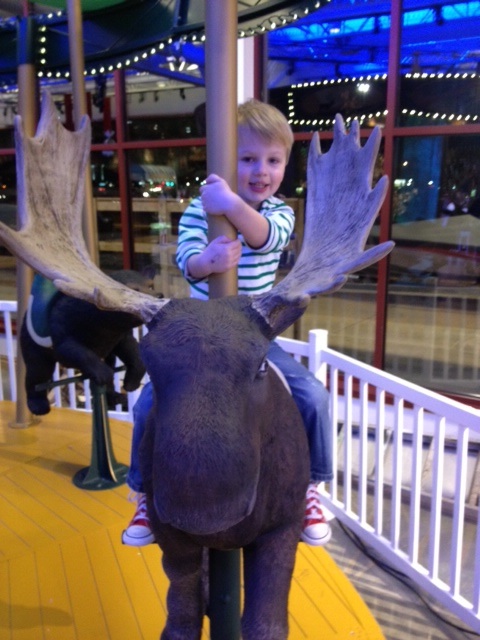 When it came time to meet Santa. He led his brother up to the jolly old guy and climbed right up on his lap. Logan was a little more hesitant but followed suit--that is until the jolly old guy picked him up, this did not make the Logie happy. One kid may be crying and one kid may not be smiling but we did get the picture & we had a wonderful time exploring their Winter Wonderland! 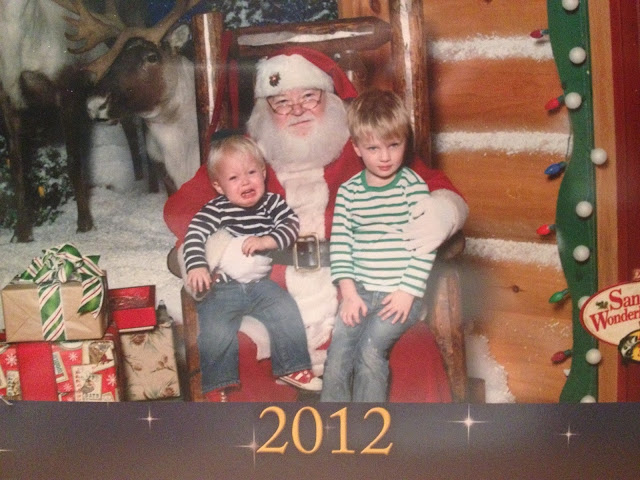 And lets not forget about Santa. Is that not the most REAL looking Santa ever? I eveb think the beard might be real! So there you have it, Christmas is in full motion at the South house. Presents are being bought and wrapped. Christmas cards are arriving (I have mentioned how much I love Christmas cards--oh wait, I wrote about them last year!) Up next, driving around and looking at the Christmas lights-did you know that they make maps for this sort of thing! No wasting time, just click, print and off you go.