Hard to believe that Logan is 18 months old today. Whats even harder to believe is that I was just 8 weeks shy of having little Logan when Kaden turned 18 months. I can't even begin to imagine what it would be like if I were pregnant again and about to give birth in just a few short months…I shutter at the thought!

But instead of looking at where we were when Kaden turned 18 months, lets talk about where we were tonight! I figured that since Logan has to endure some wonderful 18 month shots come Thursday that it was only fair to take him out and celebrate his HALF birthday. You do only turn 1 1/2 once, you know! So I picked the boys up from Brenda's, met Daddy at home and we loaded up to meet the family out at Texas Roadhouse. We figured that at least there, we wouldn't have to worry about dropping food on the floor or them being loud-both are allowed so it made perfect sense tonight.

It was great to be home and not only be with my boys but with our family & to sing Logie half of a birthday song. As the boys became restless and wanted to get up I took them to the front and away they went, climbing and dancing. The night didn't end there though, we had a special surprise for Logie when we got home-HALF a cupcake. (Kaden got to enjoy the other half) 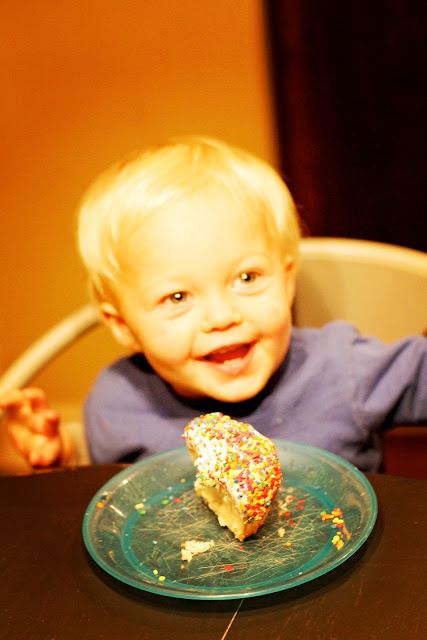 Its pretty amazing to know that each morning I get to wake up to this smiling face and each night I get to kiss him & hug him tight as I tuck him in and tell him how much I love him. There are no words to describe the amount of joy and love he has brought to our lives… Happy Half Birthday Logie. Love you to the moon and back.

You'll have to come back later this week for his 18 months statistics, his new quirks and a special photoshoot that the little guy is going to get. We are going to try and get a few of the same outfits that Kaden work in his 18 month pictures and see if we can try and recreate a few of the pictures. We'll see how just how much the boys really do look like one another...
Posted by Kayla South at 9:55 PM