So this is crazy but it looks like this little post is getting a lot of attention right now & that is nice and all but I should warn that I am not great at responding to comments--Sorry. This post is really about documenting my boys and their life, it's their scrapbook. With that being said, this idea and project is still in use today. The only issue, the cars sometimes still get misplaced so it isn't as full as it once was. We solved that issue by replacing cars with Sticky9 magnet photos. The cars that we do have, the magnets are still in place, unless some little kiddo has ripped it off the car, and they will roll fine on the floor or on Matchbox set. Enjoy. Oh and Ikea would be a great option for the magnet bars, we didn't have one in our city until recently. 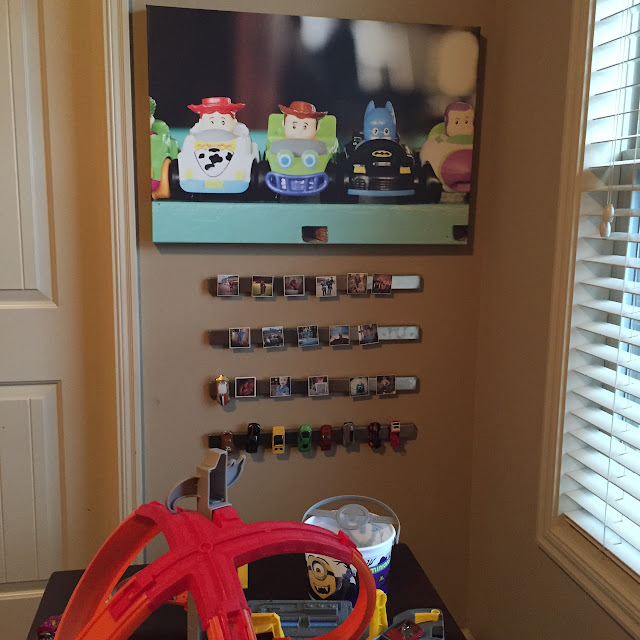 Again, awesome that this post is getting so much attention but I'm sorry if I don't respond to your comments, I haven't or probably won't realize they are there.

I saw a really cute idea on Pinterest on how we could display the boys' Matchbox/Hot Wheels. And since the idea is pretty simple and straight forward there really wasn't a way that I could add my own twist to it--I just went for it.

But before I get to unveiling the project let me tell you how we went about it. We purchased 4 21-inch stainless steal magnetic knife bars from Amazon. As soon as they arrived I pulled out Kaden and Logan's cars and went to show my idea to the hubs. I took the first car out and as I showed him how it would work, the car, it fell immediately to the ground. Wasn't this suppose to stick, it was magnetic and all & thats how the picture showed it! I went through our entire stock of cars and not a single one would stick, the cars weren't metal, they ALL had plastic bottoms.

(I believe if you have the older Matchbox or Hot Wheels cars you should be fine since they were made with metal bottoms).

To the drawing board I went. I needed to find a magnet to adhere to the underside of the car. It couldn't be too thick because then the cars wouldn't roll. It had to be just right and I needed to be able to cut them to size so I headed to JoAnn's to see what they had. I ended up with magnetic tape that you could adhere to the back of business cards and such.

I raced home to try to it out. The first car fell. The second car fell. The magnet wasn't strong enough. I decided to double it up and what do you know the first car stuck, the second car stuck and so did the third for about 10 minutes before falling to the floor leaving the gosh darn magnet behind. I needed glue. Crazy glue---ended up using a type of Gorilla glue. A few dots later and we had ourselves a functional piece of art right by their train table. All we need now are a few more cars! Vroom, Vroom. 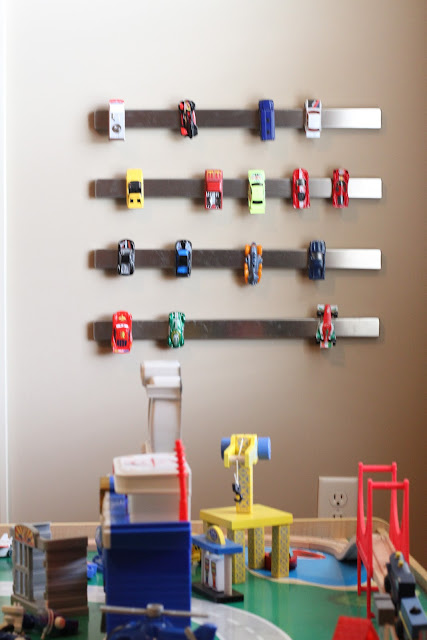 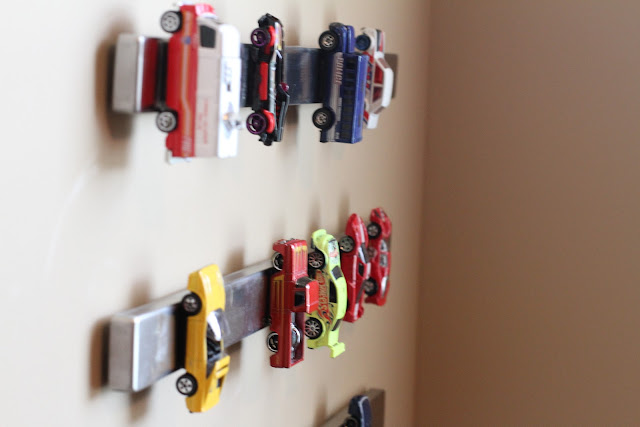 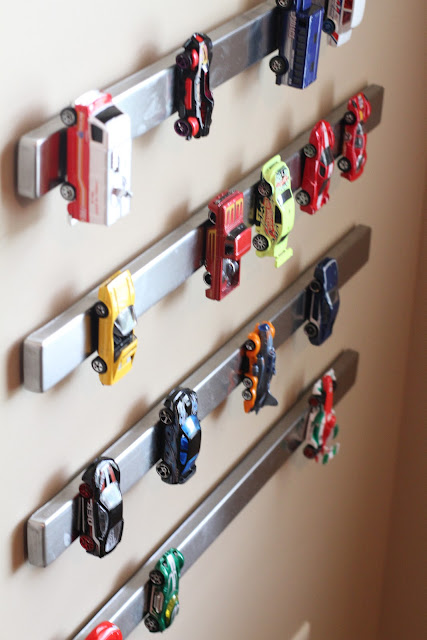