For the most part…

What's this theory I speak about? You know the one about Logan and him being the cutest little dude EVER! Well this weekend we were able to test that theory and while I couldn't be there (prior obligations) my parents went ahead and entered Logan into my hometown baby show.

For those of you that didn't grow up in a smaller-ish town like I did and that have never heard of a  baby show, here's a little run down of what to expect. You arrive for registration and are surrounded by lots of babies and their parents/grandparents who just like me believe their child/grandchild is the cutest nugget around and will walk away with with first place hands down.

The babies are divided up into divisions-one for boys and one for girls and from there they compete against babies in their age group, for example Logan was in the 13-17 month category and Madison was in the 0-3 month category. Everyone takes their seat waiting for their division to be called and once it is, its go time. You have, in this case, three judges to impress and first place in each division will move onto the Grand Champion round at the end-winner takes all. This is serious stuff. Futures are determined by how well you do at these things! We have worked hours upon hours on getting Logan ready for this day-blood, sweat and tears went into it.

For this particular baby show you could dress your child in their favorite summer outfit and at the last minute they added fall outfit since it was so chilly.

I had a photo shoot scheduled for early in the morning so my Mom and Dad decided they would meet me halfway between their house and our house on Friday afternoon for me to hand off the kids and they would take Logan to the baby show. This was great for two reasons:

1. Logan would get to participate in his very first baby show.

2. I wasn't there which was probably a good thing because I would have been way to nervous to watch. I mean, what if I was just Logan high and he wasn't as cute as I had always thought? What if he didn't win? I'm pretty competitive and that could easily break my heart! Can any one say REMATCH!

I wasn't sure how long it would take, I would be heading home around 9:30 after a photo shoot and it would take two full hours before I hit my hometown. Would I make it to see his division? Would I make it to see the Grand Champion crowned-NOPE. None of it! I called as I pulled onto HWY 71 to let my parents know I was on my way and my dad gave me the good news, Logan had just won his division. I thought he was joking. Could they have went that fast? Guess so cause Logan was grinning ear to ear with a trophy in his hand. 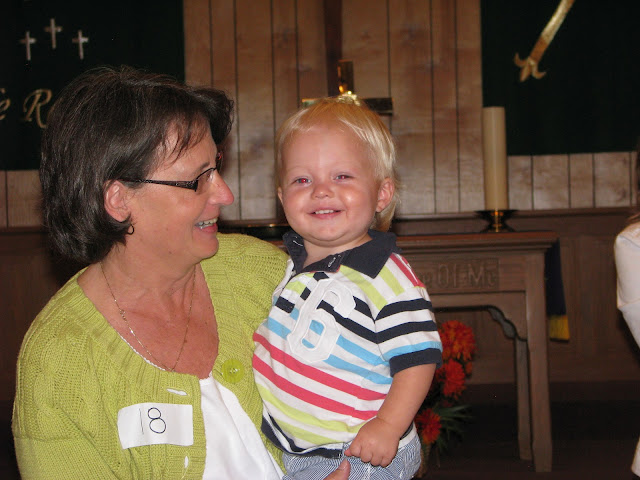 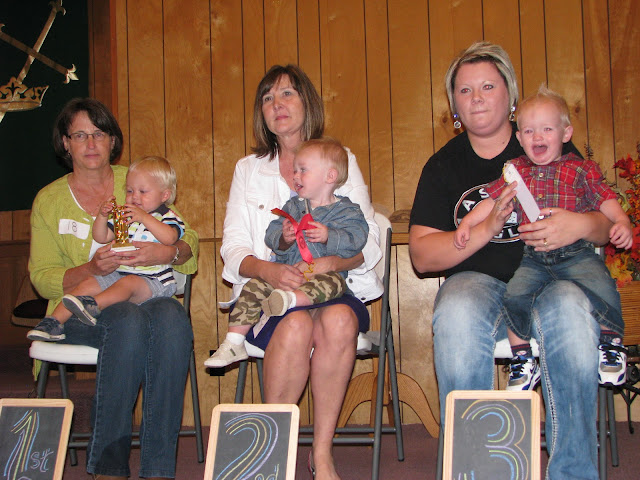 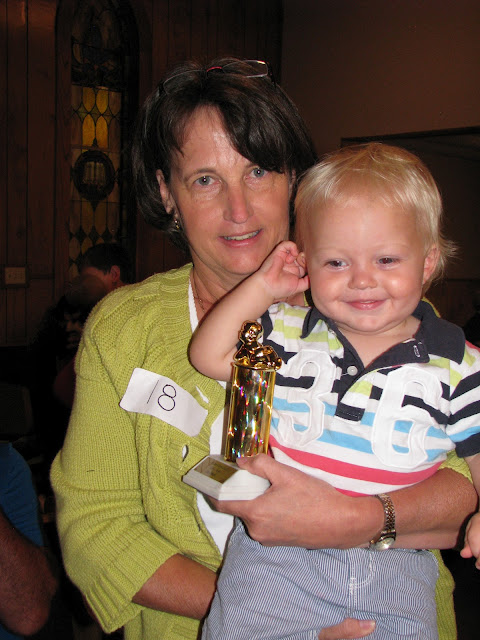 And Logan wasn't the only that won. Madison placed second in her division and Cousin Gracie placed third in hers! The Hartley/Earl grandkids were on a roll. 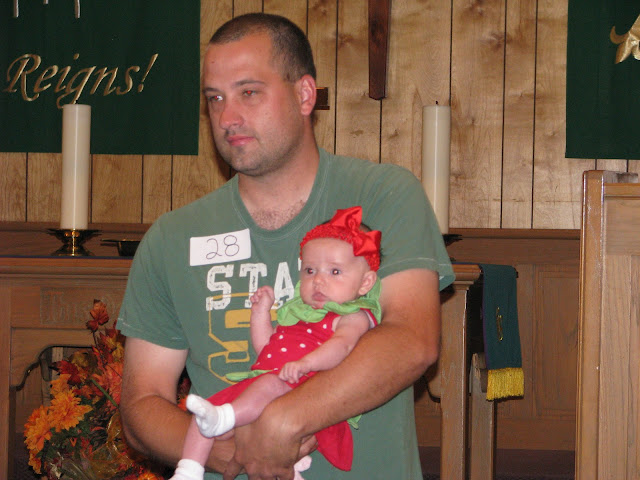 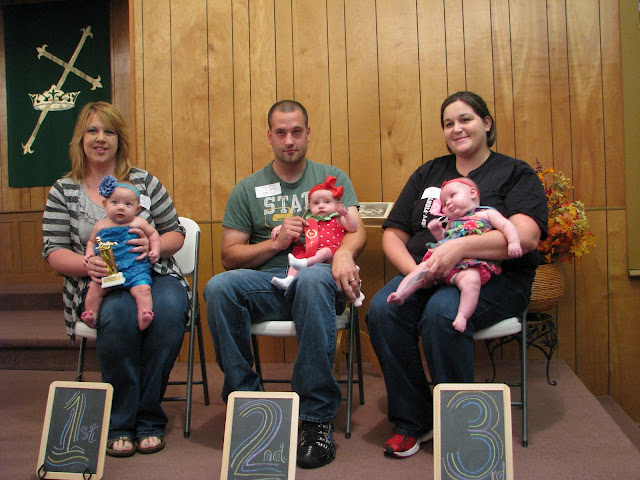 So now it was onto the Grand Champion round. Logan would take on all the division winners--please note the girl sitting to the left of Maddie with the trophy.

Logan might have been turning on the charm during his division but some how he managed to turn it on even more during the Grand Champion round but he lost. I would like to think that he got second but truth is they only "crown" the winner. In the end both Maddie and Logan got beat out by the girl above in blue. Damn her for being so cute in front of the judges.

From what I am told Logan was the ladies man. The kid blew kisses to the judges. I'll say it again, HE BLEW KISSES and the entire crowed AWED. If that couldn't win him overall cutest baby then I am not sure what the judges were looking for! 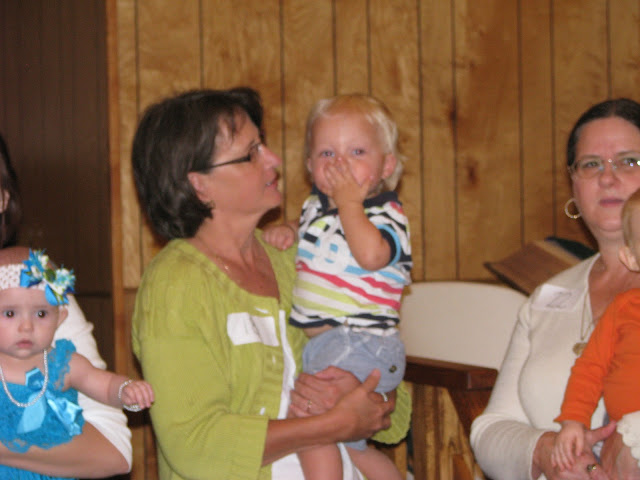 But in life you win some, you lose some. And it comes from those losses that we gain the most. We learn the most…

What did I just say? Who am I kidding? We got screwed! And this mom did the only thing she knew how to do, we came home and did a little mini photo shoot with his trophy just to prove everyone wrong! :0) He's still the cutest kid around and who would have thought the shirt we wore for his First Birthday would come in handy again! Number ONE (in his division). 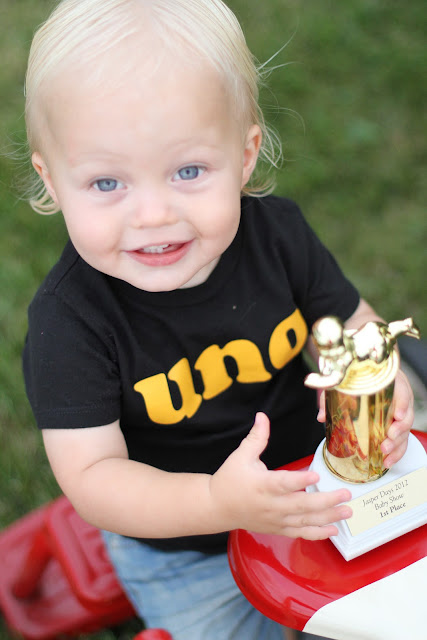 On a separate but similar note-A big thank you goes out to the girls that worked so hard putting on the baby show. It poured yet again but you didn't let that throw you off track. I wasn't there but my Mom and Dad raved about the job you girls did. They said it was top notch and that you all should be very proud of yourselves! Thanks Amber, Ashley, Allison & Jamie!