The Farm & The City

My mom came to visit on Thursday. She also watched the boys for us while we attended a very special wedding. You see, one of my bestest girlfriends got hitched and the only way to ensure that Justin and I could really celebrate with them was to have someone watch the kids. Enter Mom.

And what better way to spend your birthday than with your grandkids-Did I mention that it was her birthday too? So not only was she coming up to do us a favor but she was also giving up her birthday to help us out-Thanks Mom & Thanks Dad for being okay with it too.

So we knew we had to do something special for her on Saturday before she left to head back home. We had been to Deanna Rose the weekend before but since the kids had such a great time and we had already been to the zoo with my mom we decided to head back to the farm again. But before we dig into this weekend's trip, lets talk about last weekend's trip.

I took the boys alone. I don't venture out too often with the boys by myself but I figured that if I was going to what better place to go than Deanna Rose. Tons of stuff to keep them interested and Kaden could walk instead of ride since we didn't have too much ground to cover. 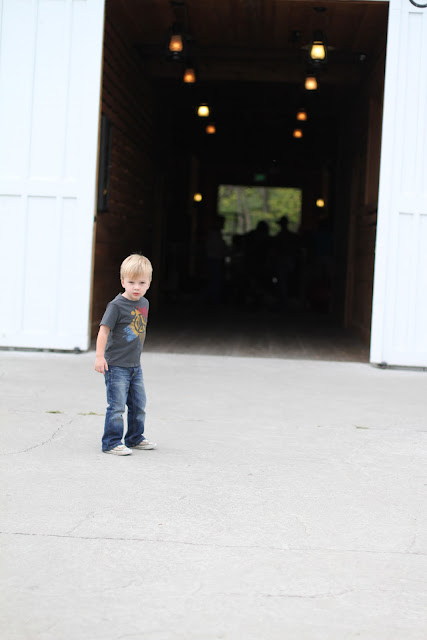 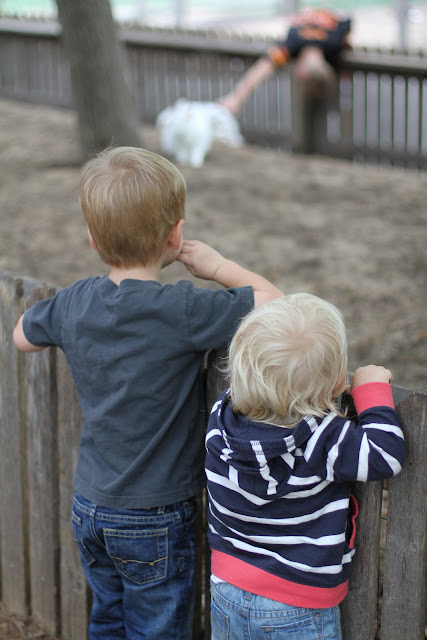 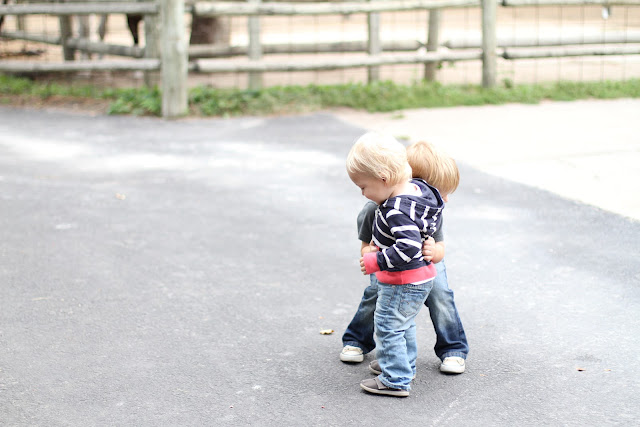 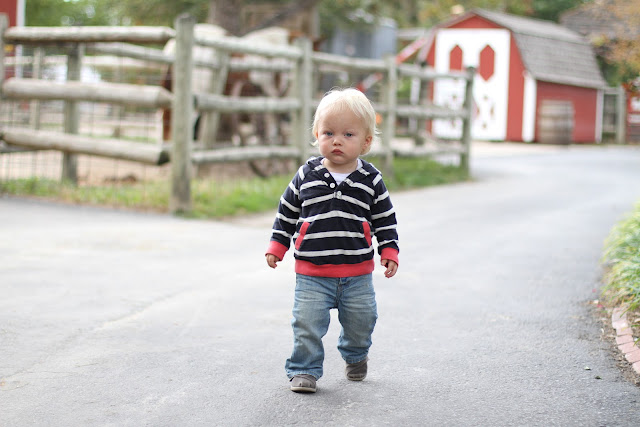 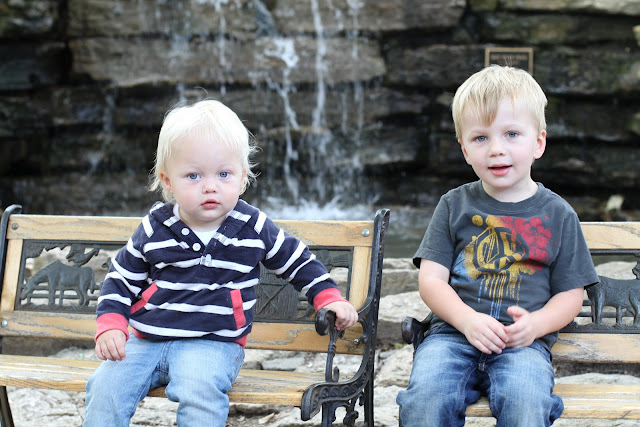 We made it around the entire farm. We saw the cows, the horses, the goats, the baby goats, pigs, chickens, goats, and the fish. Did I say goats? There were A LOT of goats.  Kaden did great. He listened to me and would stop and wait  each and every time I asked-pretty sure he really wanted his lemonade that I promised him if he was good. And lemonade he got.

This weekend's trip was a little different. The boys had just been only days before so Kaden was able to show Grandma Sara around. And as we made our way around the farm we asked Kaden which way we should go, left or right? And because we have been working so hard on which is which, he nailed every one of them.

We got to see Olive the Cow milked and her baby calf fed a bottle. We fed the baby goats and the fish at Grandpa Bob's Pond--how neat is it that the pond has the same name has my Grandpa Bob?!? We had to get picture with Mom and the boys. 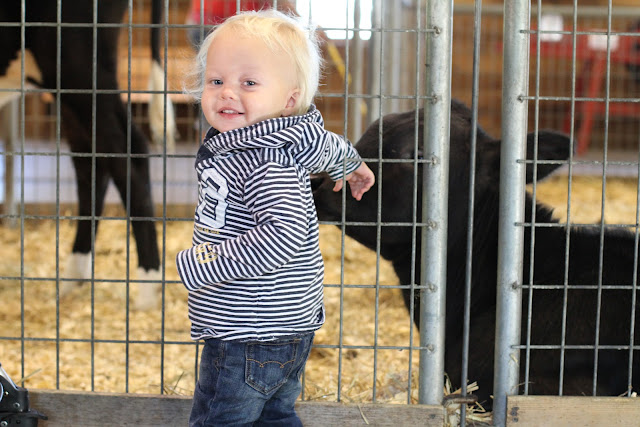 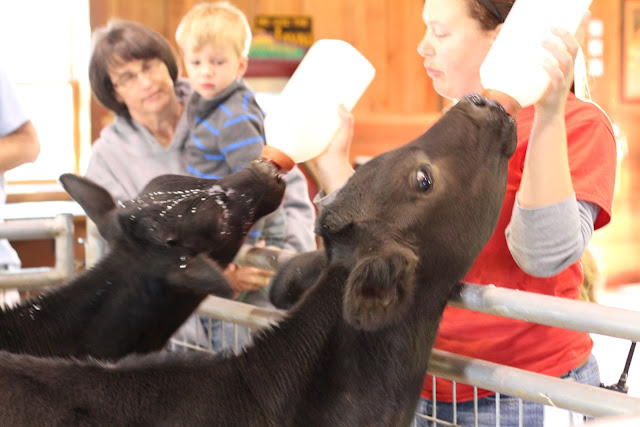 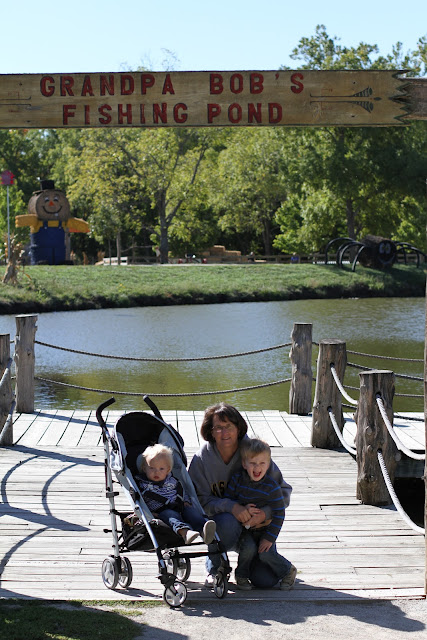 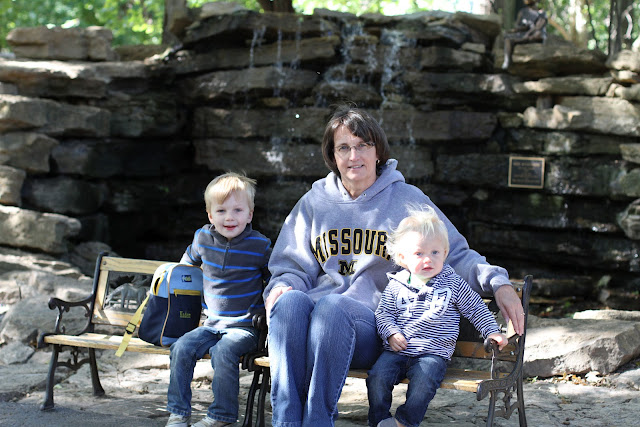 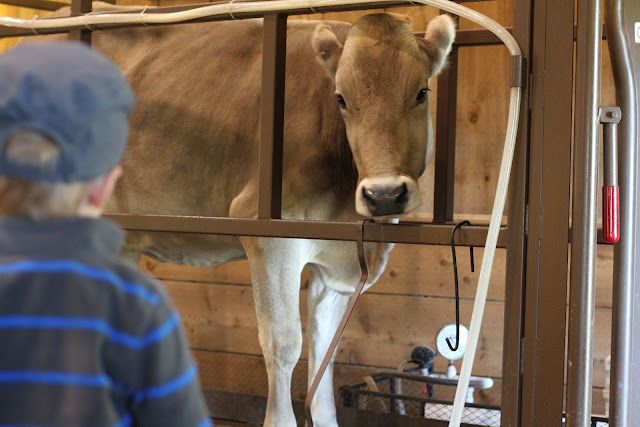 The highlight of the trip came when Kaden asked to ride the pony but there were a few rules. You must be three. Check. You MUST ride alone. No one can walk alongside the pony other than the worker who is leading the pony.

HOUSTON, we have a problem. 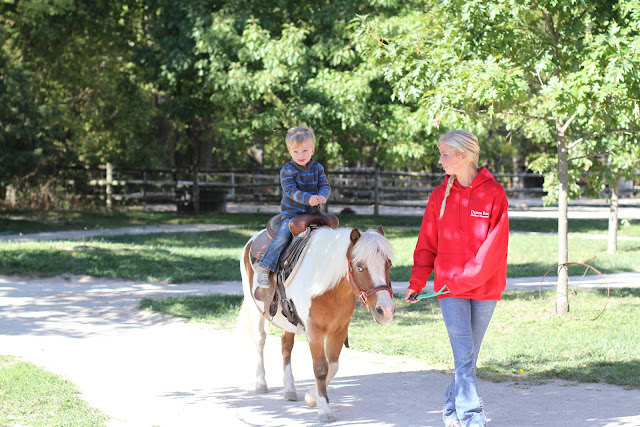 Best $3 I spent all day! He happily let the nice lady lift him up on the saddle and he held on tight as Cowboy (the pony) made his way around the track. We weren't sure that he would actually get on the pony let alone ride it around the little track but as they made their way around it the nice lady asked if they could go farther and I gave a big-proud-momma-thumbs-up. Ride Monkey, Ride.

It was a perfect way to cap off a great couple of days with Grandma Sara. We said our goodbyes knowing it was only a number of days before we would get to see her again, and Papa Tom!

We decided to keep with the outside theme and made our way to the Plaza Art Fair. The first time we went down to the art fair was in 09 just after Kaden was born and from then on we decided to try and go back each year. The following year in 2010 we went out to dinner with Jake and Jennifer and announced that we were pregnant with Logan. That evening we froze our buns off at the art fair. We might have had to sneak into North Face and grab some jackets but we stuck it out, rain and all. We missed last year, no idea why but picked it back up this year. It was a pain to find parking. A pain to try and make our way through the crowed with strollers. It was a pain to get back to our car and out of the garage but we managed to make a few memories. First and foremost we had two more babies--Logan and Nathan. Then there is Kaden and his need to "potty". The first time we ran into Kona hoping they would see it was an emergency and let us use their restroom, I mean the kid was literally holding himself. They did but the line was 10 deep for the women's. Luckily they saw that Kaden was in dire need and let him race to the front-crisis averted. Then as we are eating dinner he declares he needs to "poop" and once he does his deed he proceeds to yell "I did it" and all the guys in the bathroom cheered for him. At least that is what I am told.

So yes, memories were made but I think I speak for the adults when I say next year we might just have to call on the Grandma's and venture out on our own! 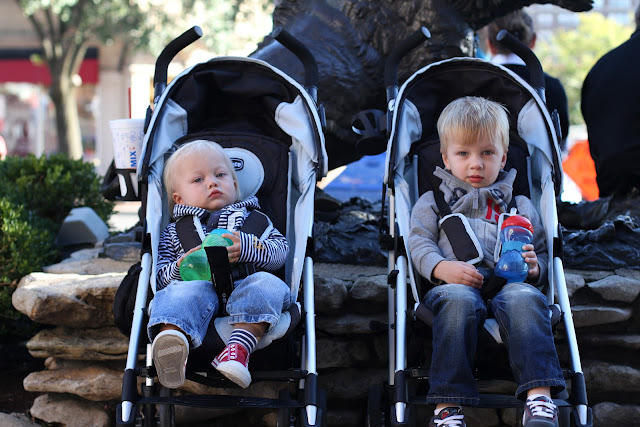 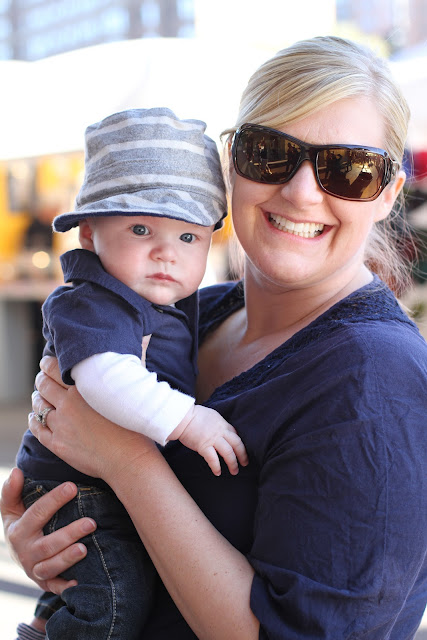 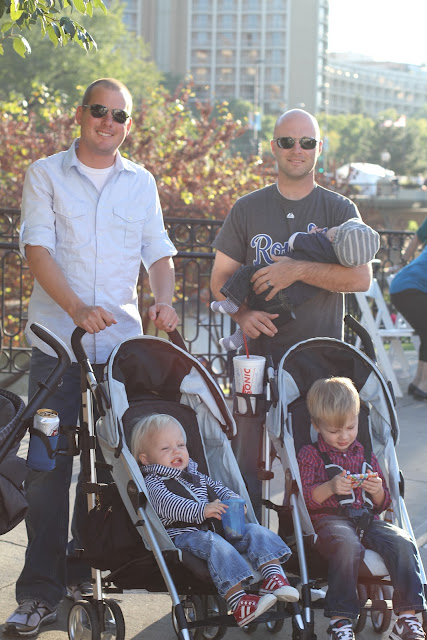 And in case anyone was wondering what I may look like when I have three of my very own, well here is a glimpse. 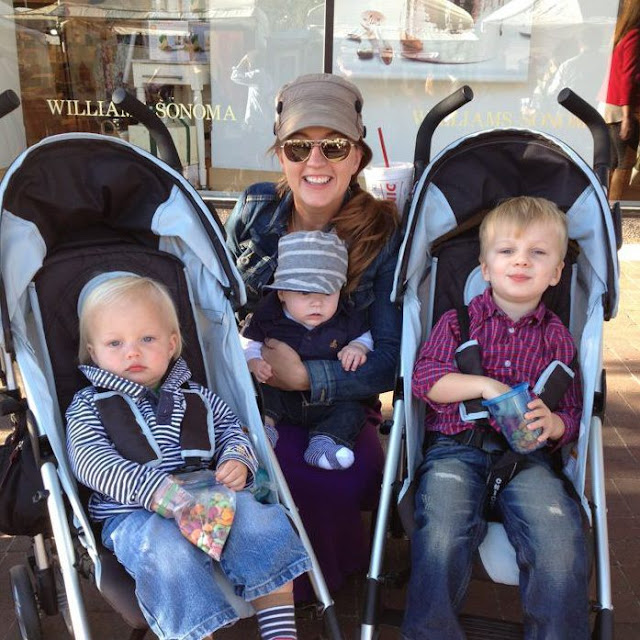 Every time I look at this its all I can do but think this is a premonition. All boys. And honestly, after seeing this I would be one very lucky lady to be a mom to three very handsome boys--in about 3 years though.