Meet Kaden--as if you don't already know him!

He is your typical newly-turned-three year old. He won't wear anything but Batman, Superman and Spiderman underwear. He would wear his Buzz Lightyear shirt every day if we would give him the option. Most importantly, he loves his brother…


And most of the time they get along just great, especially the last few months. Logan has hit the age where he can really "play". They play hide and seek, they play trains, they chase each other around the living room and kitchen for hours with their trucks. Their cute and its oh, so precious to watch as the build that brotherly bond--but just like with any loving relationship, they too have their moments.

It was Friday night, the night before Kaden's birthday party. The Berberiches were over and we were pulling a few things together for the party. I looked at the clock and realized that it was almost their bedtime. CRAP,  we still had baths to give. I asked Kaden to start the water--he likes to turn it on. As soon as we had the bubbles added both kids jumped right in. As I was talking to Tiffany and getting their towels from under the cabinet I heard a blood curdling scream coming from Logan. I instantly turned around and ran over picked him up out of the water and then turned to Kaden. He had the oh-my-gosh-why-did-I-just-do-that-look on his face. I asked him what he did, "I bite Logan's arm." Sure enough, a complete set of teeth marks matching Kaden was imprinted on his arm just above the elbow.

As I am holding a crying Logan and trying to comfort him I was also telling Kaden that we don't bite and that Mommy is really sad that he bit his brother and made him cry, that we are suppose to love our brother because they are the bestest thing in the world. Yes, I used bestest. I also told him that he would be going to bed as soon as we were done with bath time for biting. Enter the waterworks for Kaden.  Now I had two little boys crying and I could barely hear myself think.

I handed Logan over to Justin to console and I went back to finishing up Kaden's bath. He knew he had done something wrong and you could tell he was sorry. He was actually now crying harder than Logan. He was even trying to catch his breath and was almost to the point of making himself sick. Finally I got him calmed down to the point were we could at least understand what he was saying, "I stay up Mommy. I sorry Logan." And if my heart wasn't breaking before, it was now.

I knew Logan was going to be okay, he might get a little bit of a bruise but he would be fine. Heck he was already back in the bath splashing around but I had to follow through with the punishment. I couldn't reward his biting behavior, could I? All I wanted to do was wrap my arms around Kaden and tell him it was okay and that he could stay up all night and even sleep in Mommy and Daddy's room but I didn't. Instead, I put on his pajamas, wrapped my arms around him, kissed his head and reminded him that we don't bite Logan or anyone for that matter. And most importantly I reminded him that Mommy and Daddy loved him very much  and I closed the doors behind me.

I went back to finishing up Logan's bath and through the door I could still hear a few sniffles. It took everything in me to not go back in there and just crawl into bed and hold him until he fell asleep. How is it that I can go from being disappointed one minute for biting his brother to wanting to make everything in his little world perfect again? And if I would have went back in there, crawled up and laid down beside him until he fell asleep would I have been rewarding his bad behavior? The only thing that was going through my mind is that he didn't think we "loved" him anymore and that we were mad at him. Ughh. It's times like this that I wish I had some sort of parenting manual because I want my kids to know they have to take responsibility for their actions but that no matter what they may do, my our love for them will never waiver, that our world starts and ends with them. 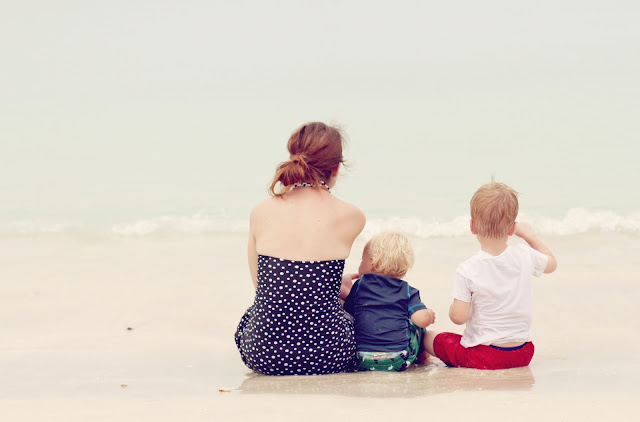