With the All-Star game being in town over the next week we felt that it just wouldn't be right if we didn't participate in the activities in one way or another. We choose FanFest and kids day at that. After a very LONG, challenging and unsuccessful attempt at tracking down tickets to Saturday at 9 am on my part, my wonderful husband walked right into Tickets For Less and easily scored three tickets for Any One Day at Any Time. He just had to show me up and although the tickets I was after were $6 cheaper, had we waited we never would have made it through the doors. We decided that we wanted to hit FanFest early. We didn't want to walk a mile in the horrid heat that we have been experiencing in KC and we certainly didn't want to fight a huge crowd. Plus the first 1000 kids (between 4 and 12) received Sluggerrr Bobble-heads and I was really hoping that either they thought Kaden was 4 and gave him one or they didn't care and just handed them out to any little kiddo. And in this case they must have gotten to go home as soon as they were gone because they were handing them out left and right and both Kaden and Logan walked out of there with their own bobble-heads.

We also stood in line at one of the best balloon artist I have ever seen. This guy rocked it. He was in his own balloon making bubble, dancing a jig, twisting, popping, blowing up and tying like his life depended on it. He was amazing and really good with the kids too. Kaden walked away with a Spiderman balloon. Can anyone say they have seen a Spiderman Balloon before? 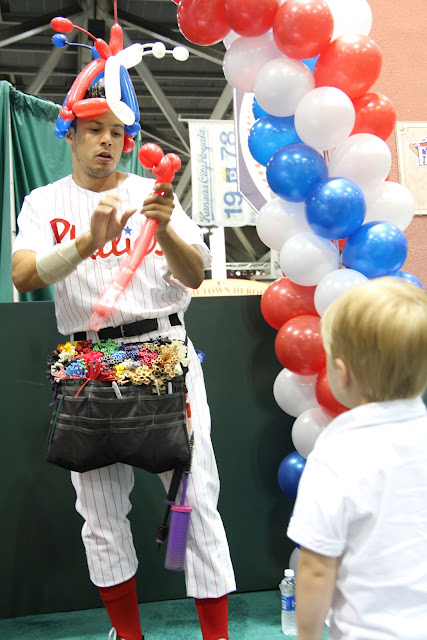 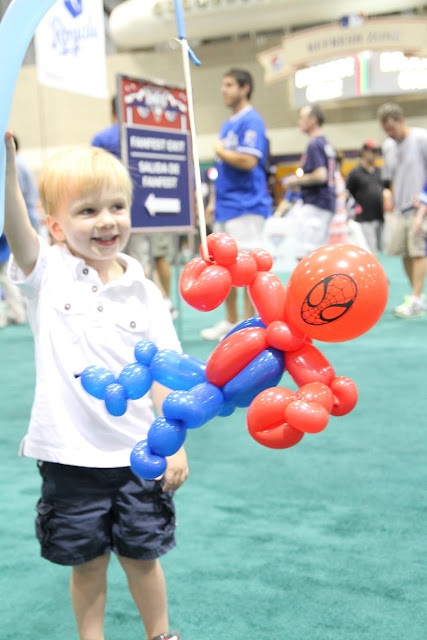 Our newest friend decided to tag along with us and we toured our way through memorabilia, activities, auctions and sports broadcasts. As we hit the All-Star retail store we noticed this long line forming and when I asked Justin who "that" was, he ran over and his eyes got big and he explained to me who Wil Myers really is and what he means to the KC Royals. Needless to say Justin jumped in line, I found two baseballs to buy and we waited for our chance to meet Mr. Wil. 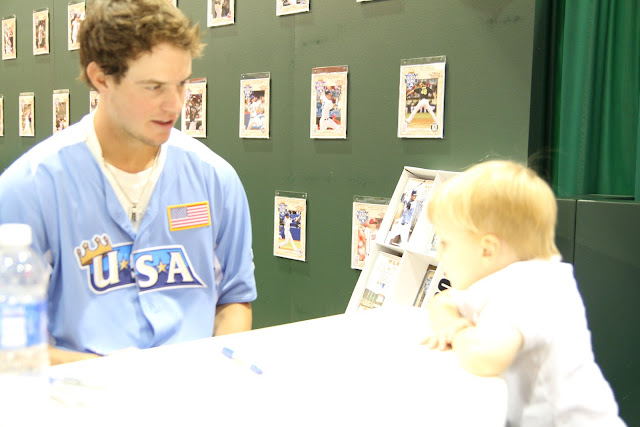 Wil was so nice to Kaden. He asked him how he was and he took a little extra time when it came to signing his baseball before moving onto the next person, which was Daddy. Its just nice to see someone really take to young kids and remember what it was like to be that age looking up at the future of MLB! Thanks Wil.

**on a side note. We had to buy a $15 program in order to obtain a signature. They (MLB) stated that Wil would only autograph something if you had the program. The mom in me shot back and asked if that meant I had to buy 2 so that both my kids could have an autograph and luckily they said they were making exceptions for kids. I also asked where that $15 was going and if any of it was to charity and they weren't sure where exactly it was going but they had no issue forcing us and everyone else in line to buy one for an autograph. CRAZY seeing how we did pay to get in the door! There, rant is done!

After we met Wil and Justin was on cloud 9 we decided to finish our tour. On the way out we ran into a face painting station and when I asked Kaden if he wanted to get his face painted his eyes lit up. We stood in line for about 30 minutes (all of which he waited patiently) and then finally his turn was up. I was pretty much expecting him not to sit still and to totally freak right as he hit the chair but he once again took me by surprise. He sat up there perfectly still as the lady painted the Batman mask on his face. Pretty sure Clooney doesn't hold a candle to this Batman. 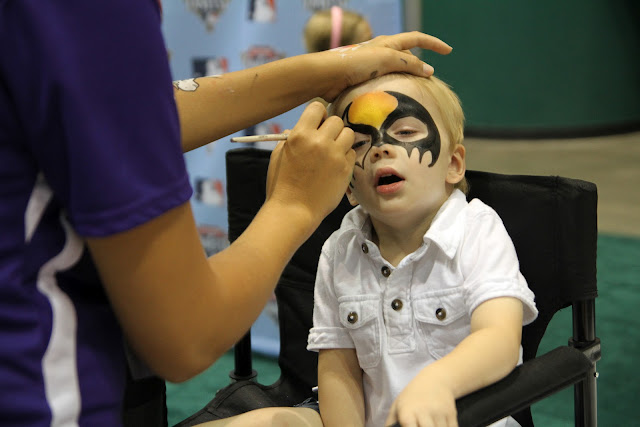 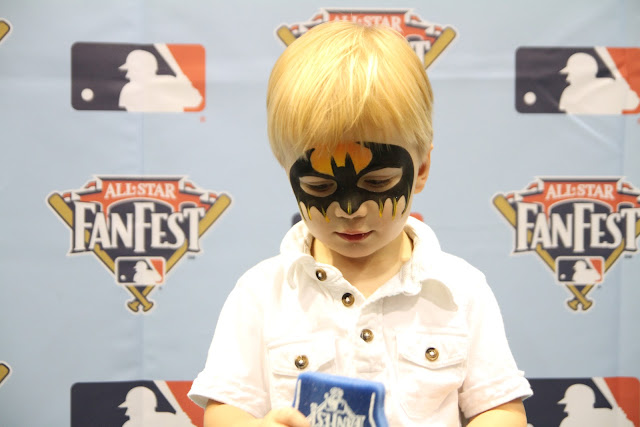 To finish the morning up we saw a BIG Monster Truck, Kaden tried out his arm at a ball toss and then we signed wiffle balls for the troops. And thanks to Bank of America, each ball that is signed with a message a $1 is donated to our troops. GO USA!! 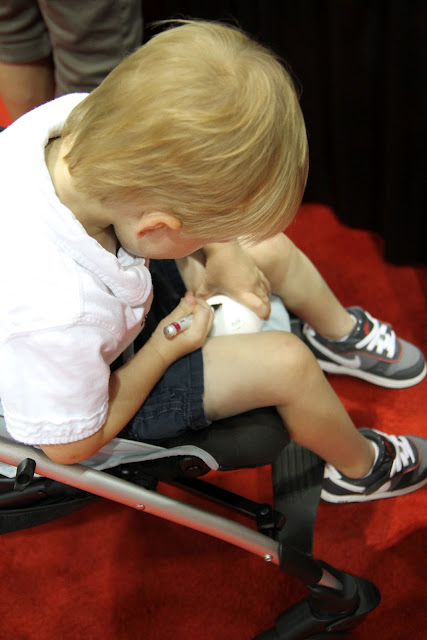 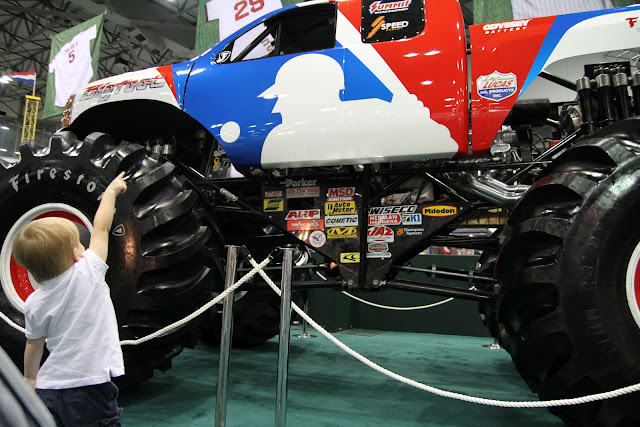 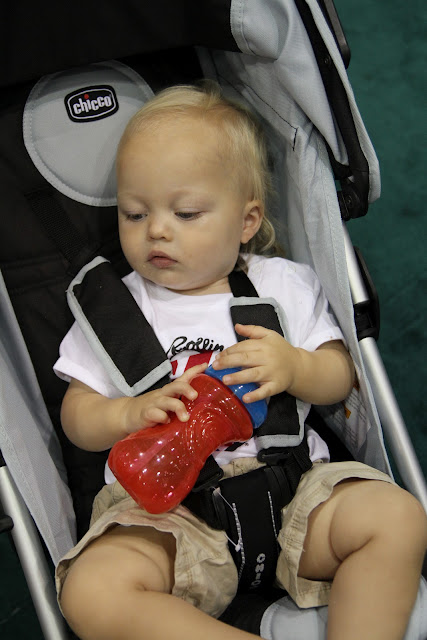 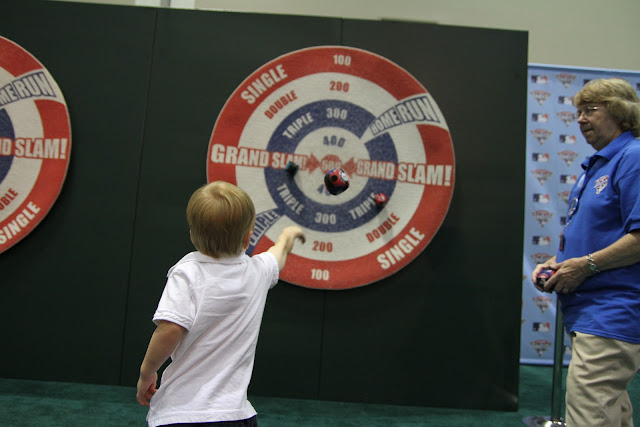 Not only did we beat the heat by attending FanFest but we were able to take part in one of the biggest events that has been in KC for a very long time. And as an added bonus it was a great way to wear one little man out--Even superheroes need sleep. 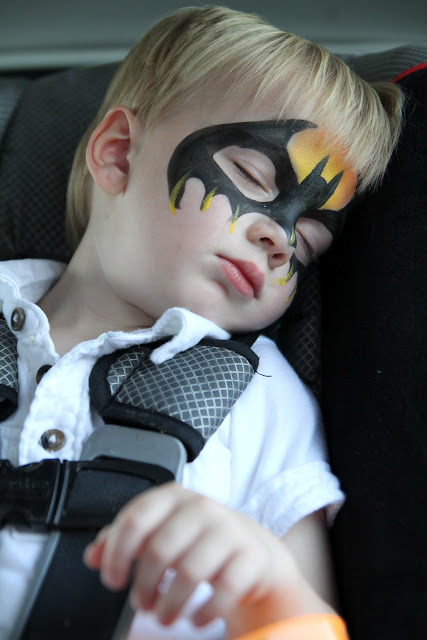