Blink of an Eye

I looked at the calendar today and realized that I had missed Logan's 13th & 14 month milestones and so much has happened over the last two months that I am kind of mad at myself for not getting it down on the blog but then again, it has been a little busy around here!

Logan has went from walking shakily to running with confidence. The days of him being a lagger are gone and here are the days of him being the first through the door. He wants to be in the middle of whatever is going on-playing ball with Kaden, being in the kitchen fixing dinner or climbing the heaping pile of laundry as I try and fold. If there is action going on, he is there. In the middle.

He also has become quite the shadow and wants to be just like his Big Brother. If Kaden is sitting reading books, Logan is sitting reading books. If Kaden is has his milk, Logan wants his milk. If Kaden is playing on the Big Blue Dog, Logan wants to be right there doing exactly the same thing. He plays on toys that are too big for him and climbs on things that are too high off the ground for him. Makes this Momma nervous but I  gotta give the boy credit though, he knows his limits and he safely stays within them. He hasn't once fallen down our stairs (knocking on wood as I type) and we have never been the gate using kind of people.

This past weekend when my mom and dad were in town for the Future's Game (part of the All-Star festivities here in KC) Logan figured out that he would climb on top of Kaden's bike and by using his tiptoes he could successfully push himself around the driveway. 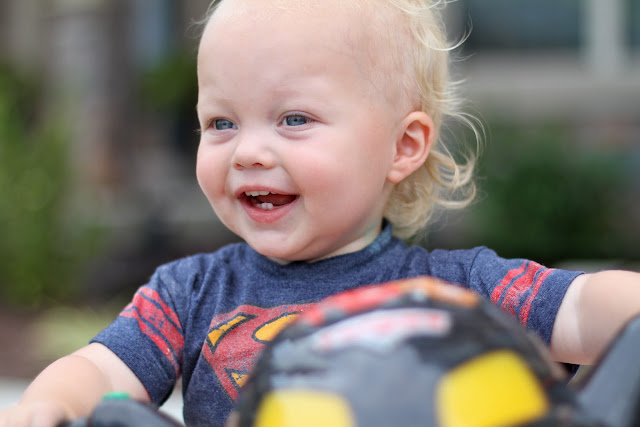 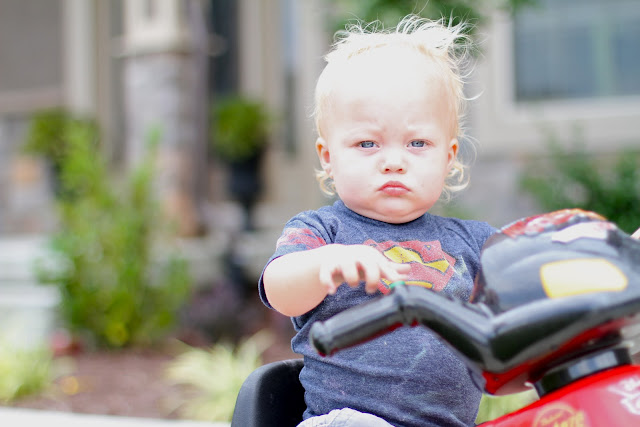 Just look at those golden locks blowing in the wind. Speaking of, we still haven't given him his first haircut, we just can't seem to bring ourselves to cutting the curls off yet. Maybe I am a little afraid that they won't grow back or maybe I am afraid that he will look like a little boy and not my baby anymore or maybe its a little of both. Whatever it is, we haven't done it yet and I don't see it happening over the next couple of months either.

Along the same line our his cheeks-His chubby cheeks that I just love to smooch on and can't seem to get enough of. Over the last few weeks I have noticed that his cheeks are starting to disappear. This makes me sad. Very sad and I wish I could just make time stand still because out of all his features I am pretty sure I love his cheeks the most--well maybe they tie with his baby blues… 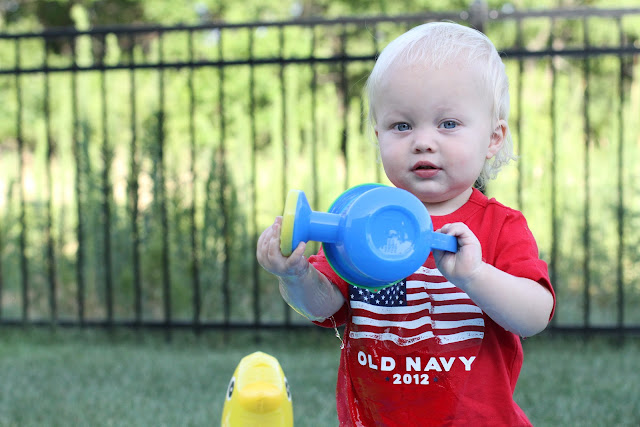 His vocabulary isn't vast, he knows how to get what he wants by grunting, pointing or even pulling us to what it is that he needs. He can say the easy words-mom, dad and bye but over the last few weeks he has worked in Milk. And even though he is a man of few words, he knows exactly what we are saying and can follow simple instructions. He is one smart boy-another trait he seems to take after his brother with.

From the beginning he has been our happy baby, our content baby and to this day that remains true. He has the most infectious laugh, the most darling smile and the boy still loves a good cuddle. Before I know it we will be celebrating his 2nd birthday and I'll be longing for those times when I could just cuddle him up in my arms and stare at his little baby face. Its hard to believe just how much he has changed these past 2 months, a couple of extra inches has brought on a whole new world for him and a whole new level of courage.

Have I said how much I love being a mom of two boys cause if I haven't, I do. Its the best thing since sliced bread, oh and marrying that hubby of mine.
Posted by Kayla South at 9:17 PM