This was kind of easy. It really didn't take too much planning, just picking out the perfect picture, sending off for the canvas and waiting for the open back frames to go 50% off at Hobby Lobby. I got the idea to do this project when an awesome Living Social Coupon was sent my way-one gallery wrapped canvas 20x24 for $49, regularly $109. Gotta love a great deal! Oh and I should mention that these are all over Pinterest and no ideas were my own! I borrow and reuse.  :0)

I chose a picture of Logan that had some pop of color but that would also feature those chubby cheeks, pouty lips and baby blues he has. After having the picture picked out I contacted the company who hosted the Living Social Coupon, Image Canvas and asked if I could upgrade the canvas to the next largest size and pay for the difference, I was really wanting to get a 20x30 and lucky for me, they said no problem. They updated my codes and when I checked out it was like getting $129 for $69. (I actually bought two of these coupons and upgraded them both and ordered a family picture for the other--still waiting on that one!)

So now that I had the picture picked out and the canvas ordered it was time to figure out a frame. I wanted to keep with the "proclaimed wood" theme since we had made both boys growth charts from Grandpa Earl's barn wood so we went with a wood frame that was a little bigger than the actual canvas so that there was space between the canvas and the frame. Kind of in love with how it turned out! 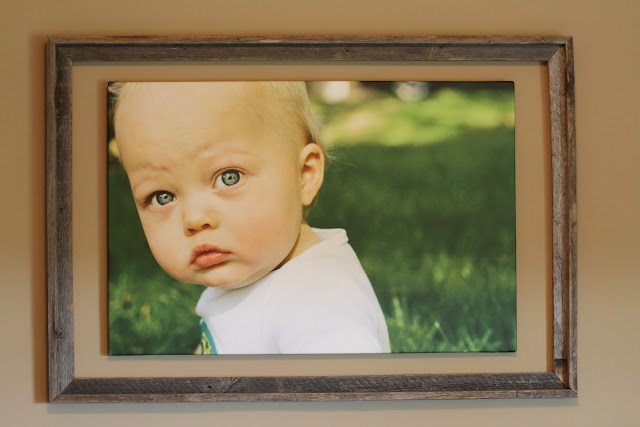