It is no secret that our dearest Logie has some of the cutest but chubbiest cheeks around. The kind that grandmas won't be able to keep from pinching and kissing every chance they get. I mean, I do it at least 10 times a day as it is. And seeing how much the kid eats, it doesn't surprise me one bit that he still has them. The kid is a porker but then again, he only measure in the 48th percentile when it comes to weight-guess he just got my mom and I's height!

I have often wondered, 'Can this kid get any cute?' And I know, I am his mom, and I should think he is just the cutest thing in the world (along with his equally cute big brother of course) but I have people all the time saying the exact same thing, 'Stop it Kayla, could he be any cuter?'. And just when you start to think, nope, he is as cute as humanly possible. It happens. His infections, belly laugh. One that I could listen to all day long.

The last few nights he has gone through a period of about 10 minutes where he just laughs and he laughs loud and hard. He seriously cracks himself up.

One of the first nights I was checking his teeth to see if he had any new ones coming in and sure enough, there were two. As soon as I touched one of them he bit down-HARD and I pulled my finger back and yelled "Ouch". He started giggling so I went with it. I put my finger back in his mouth, pulled it out (quicker this time to keep from being bit) and yelled "Ouch" agian. He lost it. His whole body was shaking from laughing so hard. And his smile with those chubby cheeks, well it could turn the saddest day into something pretty special.

We had another experience last night and this time it was while we sat on the floor playing a game of Jumping Frogs from some kid pack we got a few months back. Basically you try and flip the frog into the box, nothing too exciting but for some reason this kid thought it was the funniest thing he had seen since he bit Mommy. He just laughed and laughed and laughed.

The sad thing, we tried catching it on video but we were too late. He had been laughing for so long that the laughs were starting to get quieter and quieter and even though we got a little bit of him laughing on tape, it just wouldn't do it justice to post. So tonight we waited. With our camera ready…and nothing! Go figure. Hopefully we will be able to post something very soon.

In other South news--and news that has pictures to go along with it, the boys are playing so well with one another right now. Kaden loves to have Logan follow him around and Logan loves to follow. Most mornings we start out with a little milk with a few Fruit Loops and we turn on the movie of the hour---Toys Store 3. And they just sit and watch. It really doesn't matter where or what Kaden is doing, Logan is always no too far behind. I love having two boys and watching them interact and love on one another like only brothers can. Its something special. 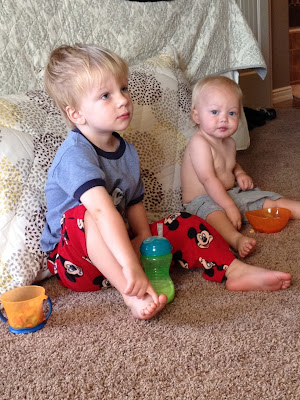 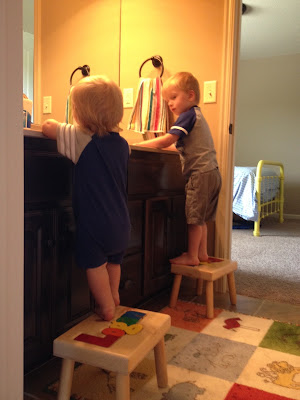