Take Me Out To The Ballgame...

We are probably some of the worst Royal fans, we have yet to make it out to a game. That all changed on Wednesday night. Thanks to our dear friends, Scott and Korie, we had 4 tickets to see our Royals take on the Boston Red Sox. We arrived in good time, changed the kids in the parking lot and loaded them up in the double stroller-the thing is a BEAST but I am glad we took it. Once inside the park we sat down at a picnic table and pulled out our dinner. Kaden was too excited to sit still and kept running to the rail and seeing if anything new was happening. Music was playing, he was dancing and every once in awhile he would run back to us and grab another apple to munch on. He was in his element and it was nice to be able to sit back and let him roam a little more than last year.

Logan never really moved from his front row seat in the stoller but why would he. He was being pushed around, had his milk in one hand and a cracker, or two, in the other. He was full of giggles and loving life just as Kaden was. 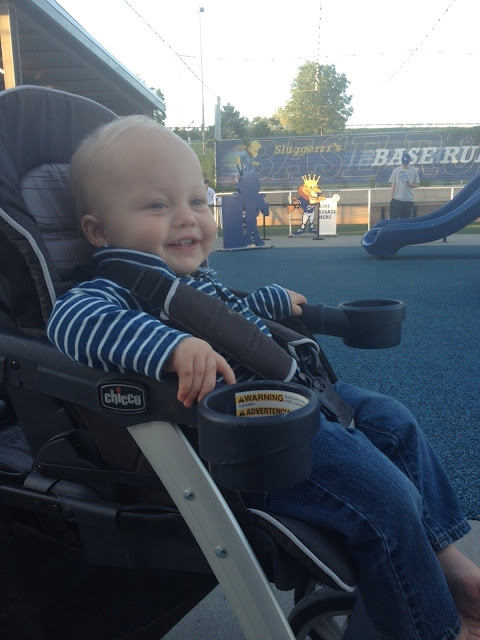 As they were announcing the players we decided to check out the outfield experience and let Kaden run wild. On our way fireworks were being set off and if anyone knows anything about my son, its that he doesn't like loud noises that just pop out of nowhere. He freezes, covers his ears and locks eyes with me. But this time Daddy and I tried something different, we went BOOM, BOOM, BOOM too and cheered each time they went off and it worked. In the end, Kaden started making the same firework noise and was jumping up and down a hooping and hollaring. 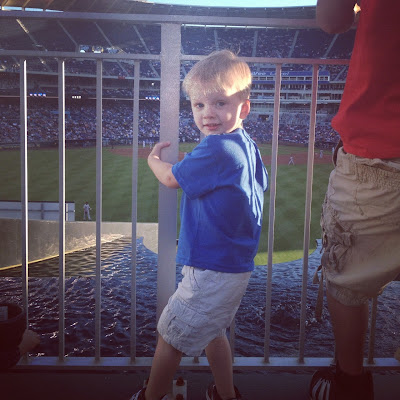 Although we were only there for about 2 hours we covered a lot in one night. We rode the carousel. We played on the jungle gym. --Side Note. I can't believe how big Kaden is and the sort of things that he is able to conquer on his own when playing on a jungle gym. I would want to help him walk across some steps and he would push me away. "Mommy, I do it." He is almost too fearless and independent for the control freak Mom! -- After the outfield experience we headed back over to the right field area where Kaden took a seat on the top of the steps and yelled "Go Royals!" He got so many girls to turn around and smile at him. He may have turned a little red but you could tell he was eating it all up.

We were certain we would have two little boys deep asleep and dreaming about our next trip to The K but they both held strong and were awake when we drove into our driveway 30 short minutes later. (We were a little worried about our new drive to the stadiums but pleasently surprised when really it took the same amount of time to get home.) Once home and tucked into their beds they drifted peacefully off to sleep and surely they dreamt of the day they would walk out onto the field to 'I'm Sexy and I Know It', step into that batters box and hit their first home run infront of their hometown crowd. And even if they weren't dreaming about it, I sure was.