It was a bright and early wake up call for us this morning. Grammy Janet's one request, 7:30 Mass. Which means, we had to up, dressed and out of here by 7:10 just to get a seat at church. I packed Fruit Loops. I packed puffs. I packed cars and coloring books and drinks. Still it wasn't enough and about 15 minutes into Mass Justin and I were both off in different directions. Kaden headed outside and I moved towards the back where the standing room only crowd was. We finished the service there.

But what could I expect? We aren't frequent church goers. We believe. We read but when it comes to church we don't go as often as we should. So for the kids to know they should sit quietly and only whisper is a lot to ask, especially for a 2 1/2 year old. Even though it was pretty stressful we did have a highlight. Right before service was about to begin and everyone was finding their seats, Kaden yelled out "Happy Easter!" Dozens of heads turned and every single one of them had a smile on their face and a couple even told him how cute he was. Bet they weren't thinking that 10 minutes later and I just hope we didn't ruin their Easter Sunday service.

After service was over we headed back to Grammy's for breakfast. We pulled up to quite a surprise. The Easter Bunny was only two houses down and Kaden and Colton couldn't take their eyes off of him.

We decided that we would just venture down to the Easter Bunny and say hi. When we arrived, Janet's neighbors ran inside and "reloaded" to make ensure the Easter Bunny had something for each of the boys. They were fantastic. And the Easter Bunny was even better. He was high-fiving, waving and hopping around.  Kaden was a little hesitant when he was up close to him but got very talkative and friendly when he backed away a few feet. Distance was his friend. Then the Easter Bunny brought out his chocolate and Kaden happily trotted up to get it! This kid is a choco-holic! 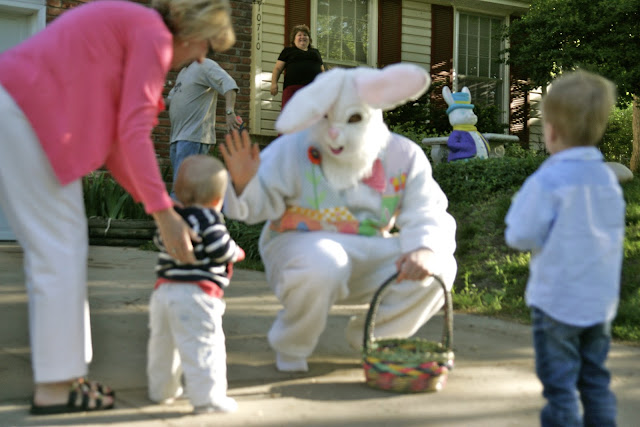 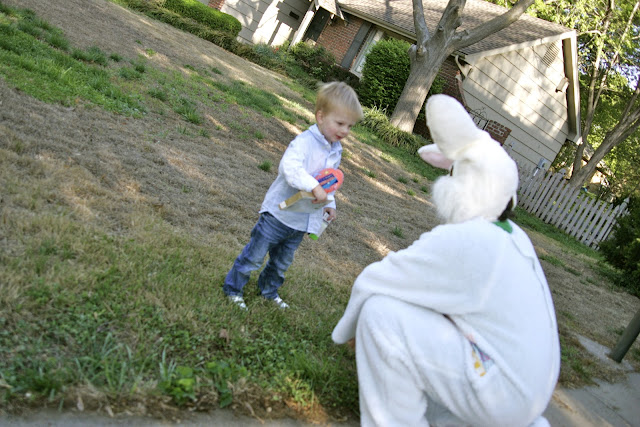 After the high of the Easter Bunny it was time for the kiddos to search for their Easter baskets. We we hoping that since we had to get up so early that the Easter Bunny would make a stop by Grammy Janet's too. And this Easter Bunny, well he was smart. He made a path to Kaden's Easter basket by leaving a trail of yarn. It started at the porch, weaved around the light pole, the tree, through the fence and then to the bushes. At the end sat a new scooter and Kaden eyes lit up like a Christmas Tree. He instantly threw aside the basket of goodies and pulled that scooter out, he just had to try it out for himself. As he scooted around, Logan found his goodies. The Easter Bunny brought him his own ball (Kaden doesn't like him playing with his, he isn't that great at sharing yet), he got a toy where Mommy's iPhone will go inside and he can play 'games', and he got his own Batman mobile. His favorite thing, a plastic egg that had money in it. Go figure! Oh and beware, picture overload ahead! 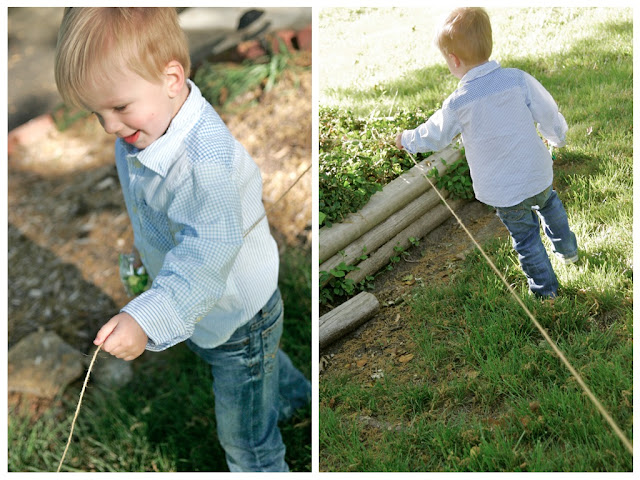 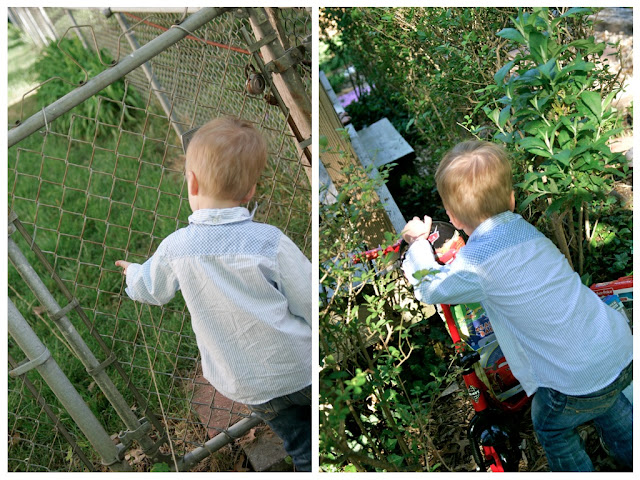 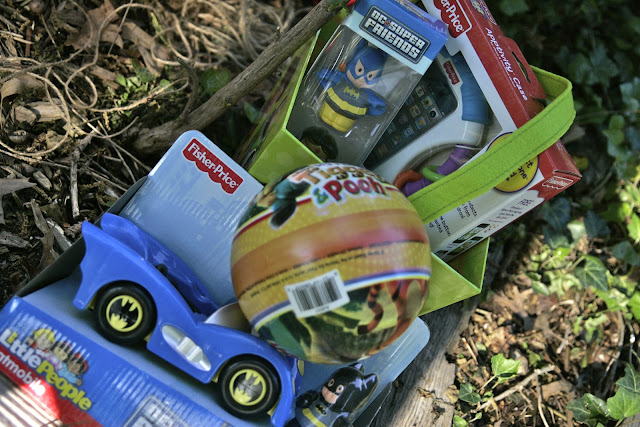 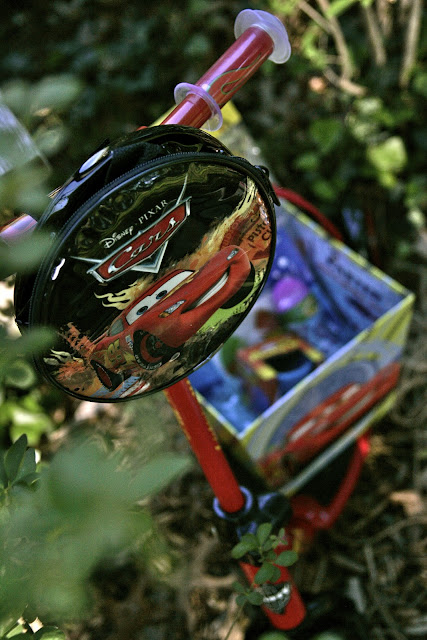 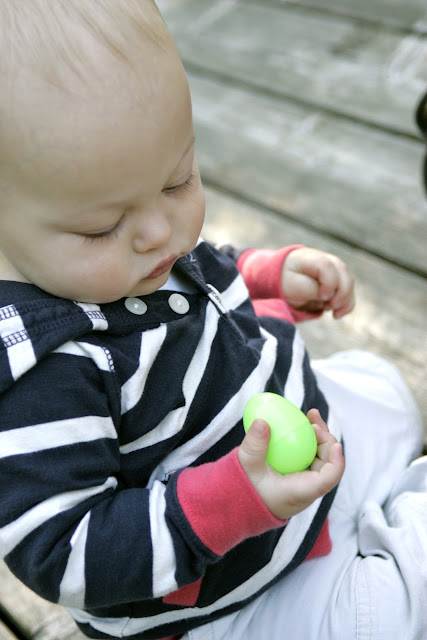 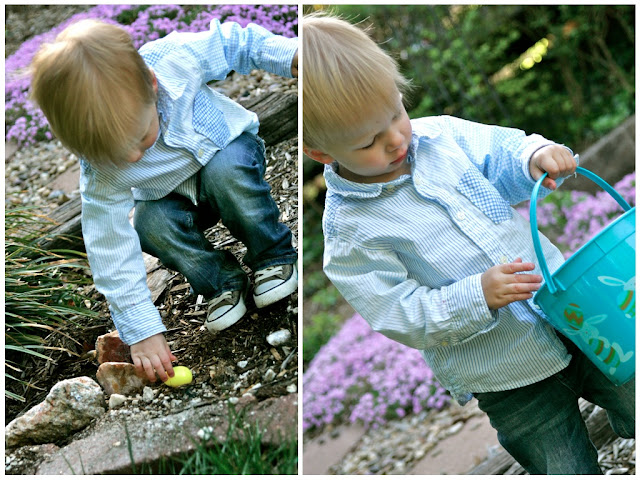 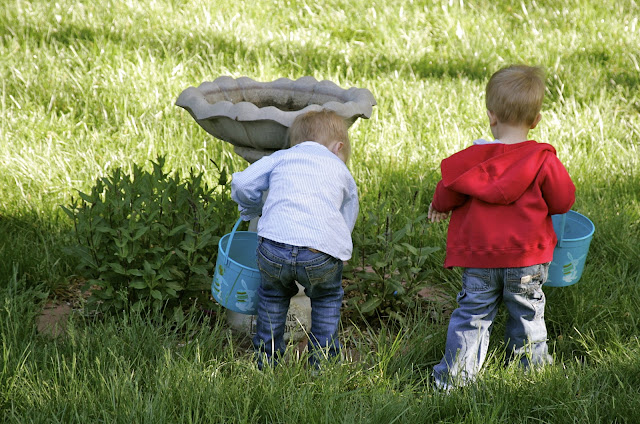 Easter Morning was pretty great. So why Bittersweet? This is why… 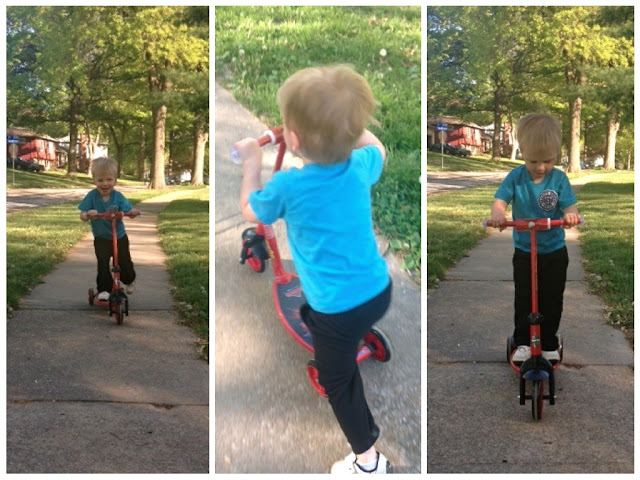 I had promised Kaden that we would go down to the park after he woke up from his nap. We waited for Logan to wake up, took a few pictures of Logan and then Kaden and I took off to the park. About a third of the way there I realized that this would be the last trip to this park that we would take. This would be the last time we would make this walk. And that this would be the first of many lasts with this house. The tears came streaming down. I knew I would cry about leaving the 8806 but I didn't think it would start this early, we still have 5 days left. So this particular park trip, well it was an extra long one. Long enough to make sure that Kaden went down every slide. Climbed every wall. Rode his scooter around, around and around. We even lingered until Daddy came looking for us! We said our good-byes from the car window as we drove away. Thanks Quail Creek Park for some great memories. You will be missed. 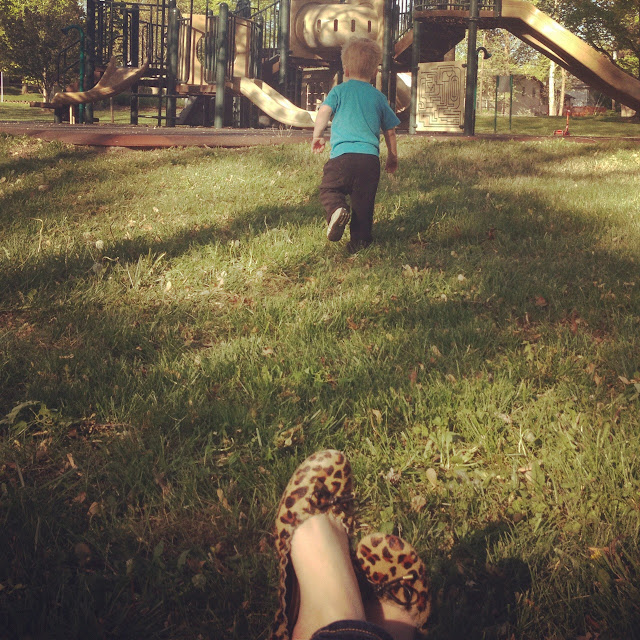