Tonight was Family Fun Night. It was kind of spur of the moment but like it like that. Justin and Jake had purchased tickets to the Big 12 Tournament awhile back and silly me thought it was just for one game and not the entire tournament. It really wasn't until this week that I got the whole picture of what was going on and I'll admit, I was kind of bummed that I didn't get the invite too. I mean, who do you think watches every MU game with my husband. I'll give you a hint. Starts with a M and ends with an EEEEEEEEE.

I get it though. I would much rather go shopping with the girls than with my husband….

Fortunately for me though, Jake had a prior engagement. You see, he is expecting his first child and there just happens to be this thing called Child Birthing Class that he is required to attend and that was tonight. Since he couldn't be in two places at once, Justin thought it would be fun to take the boys. We proudly wore our Gold and Black -fully knowing that we don't play until tomorrow night-and loaded up in the car and headed down to the Sprint Center.
﻿ ﻿ 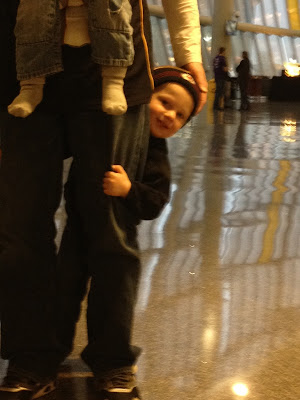 We didn't have first level tickets and the stairs to our seats were pretty steep but the seats couldn't have been better for the boys. We were row 1. No one in front of them and they could just lean forward and watch some basketball, pretty POOR A$$ basketball but basketball none-the-less. We still managed to have a great time. The boys were really good but since the game was boring and there wasn't much of a crowd to get it going, we decided to sneak out at halftime. Perfect timing on our part cause we made it before the rain came down. 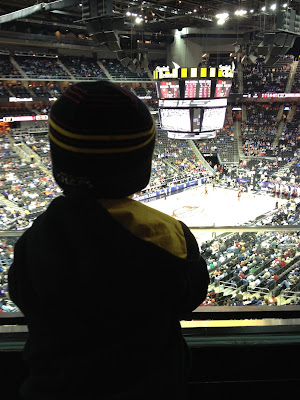 Tomorrow night when the Tigers take the court, the boys and I will be at home (looking a little something like the picture below) and cheering loudly. Hopefully Daddy and Jake have as great as a time tomorrow night that we did tonight! 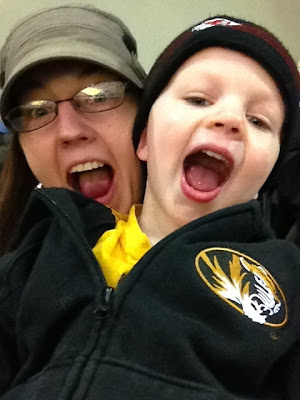