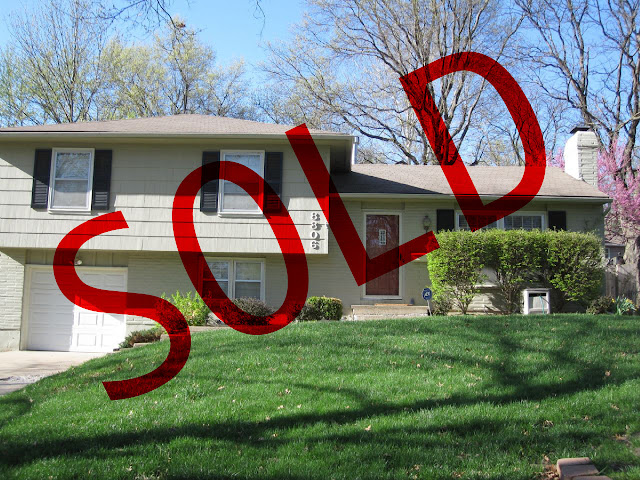 That's right we sold it. And by we, I mean our agent, who happens to be pretty awesome and I would totally recommend her to anyone looking for an agent. She is part of a great team that provides a lot of marketing support, we couldn't do what they did on our own. We tried but it just didn't have the same effect. And in a matter of 15 days, our agent had it sold! Like I said, Awesome agent.

But let's back up for a second. It wasn't long ago that I was blogging about being disappointed on a house that we had found, fell in love with, put an offer on and had it all pulled out from underneath us in a matter of days. We were bummed and really didn't think that anything would measure up to it. At the time that we found this house, we hadn't sold ours, heck we still had it up FSBO. As soon as we found this house, we turned our house over to Stephanie and told her to sell it so we could move into our NEW home. Not too fast, Kayla. The IRS got involved, that house is now in foreclosure and won't be available until the middle of July at the earliest and then we might have a chance at getting it. MIGHT. I wasn't really digging the might part of that or the waiting part but we decided to keep it on our list and start looking elsewhere. We still had our house to sell and we had no idea how long that might take. Everything happens for a reason, right? I was sure hoping so.

Fifteen days later and we got the call from our agent. We had an offer. It was a decent offer, a place to start and we weren't going to let it go. We countered. They accepted. We were thrilled and now worried. What were we going to do? How long did we have? April 25th. Just under 60 days to find a new home and get a contract on it, close and move. We could do this. We would do this. But we didn't want to get too far ahead of ourselves, we still had inspections and appraisals on our current home to get through and we were holding our breaths. We didn't know what to expect and we knew that even though we wanted to do anything and everything to sell our house, there were some things that we just wouldn't be able to do. New roof, New driveway.

It was a nervous couple of weeks but finally the date was set for the inspection. All was good. A few things here and there but nothing that was too costly. Now the appraisal, this was nail biting. We really didn't have a clue where things would come in at. We knew we had made a number of improvements with a new kitchen, carpet, windows, deck, etc but the market also hasn't been helping any sellers out lately. We were told no news was good news and today was the 3rd day of no news. I decided to text my agent and receiving that text message back was probably one of the best sounds of late. The appraisal came back and it was over the selling price. Thus, I am blogging about our exciting news. I have been dying to blog and document everything that is going on but we just didn't want to jinx anything and decided that until the appraisal and inspection came back okay, we wouldn't say anything. Correction. I wouldn't BLOG about anything, which turned out to be harder than I had expected but I did it. There was absolutely no way I was going to get the blame for something falling through.

So where are we going? Did we find something else?

We did. Three outings later and we have a house under contract. We knew there would be a few things on our wish list that we would have to give up. Does anyone ever get EVERYTHING they were looking for? I don't believe so and in our case we gave up land. We were okay with this though. I got my open floor plan, master bathroom, master closet and we don't back up to ANY neighbors, nope we have green space. Justin, well, he got his outdoor living space, sprinkler system, and a "man cave". The boys, they got a neighborhood pool, a pond/lake and a level driveway that will make one bada$$ basketball court in a few years.

I haven't forgot about the house we first fell in love with and I am not sure if any house will live up to the curb appeal that it had-it was something special. But this house, well it offers sooo much more than what the other did. So yes, everything happens for a reason. This is the house we are suppose to call home. Where the boys will spend their summers at the pool, riding their bikes on the trails and bringing home snakes from the woods. And in a matter of 30 days, it will be our new home.

So pictures? In time. The pictures that are online just don't do it justice and we hope to make it back out there this weekend to check on a couple things and I'll take some pictures then. And if you are in the market for a new house in a neat subdivision with some of the coolest neighbors (us!) let me know, we would love to have friends across the cul-de-sac!

Oh and if you are wanting to sell your home and would like to reach out to our AWESOME agent, just let me know and I would be more than happy to pass along Stephanie's contact information.
Posted by Kayla South at 9:46 PM