So this past weekend Kaden, Logan and I headed back home to see Papa Tom and Grandma Sara. As always, I was armed with my handy-dandy camera. Ready to document the whole weekend with pictures. Except this time I hardly took any pictures. It was a nice change but I really can't image it happening again any time soon, you just never know what you are going to miss! So my apologies for a small number of pictures from our weekend adventures but I think the pictures that we did get, sum our time up perfectly.

The one thing that never changes when we go back to my parents'--they spoil us. Spoil us ROTTEN. We eat like kings and queens. We stay up past our bedtimes. We sleep in later than normal. We ride four wheelers in the house. And we might even eat Birthday cake for breakfast. This trip we were spoiled even more. We beat both Grandma Sara and Papa Tom home but when they pulled in the driveway they had some special people with them-Cousin Brett, Leah and Blake were going to stay the night too! It wasn't long before Zack and Lindsey heard about the party and they too were on their way over. It might have been full house but it was pretty perfect. You heard giggles coming from upstairs. Laughter from the living room and chatter from around the kitchen table. Then all of the sudden we look up and see this… 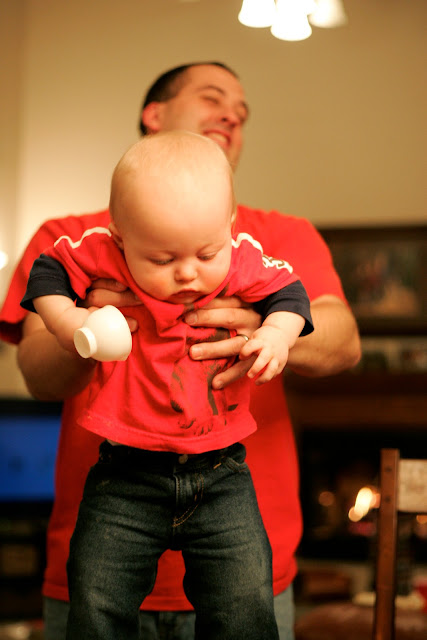 And this is the guy that is going to be a daddy in just a few months? He has a lot to learn or else poor Lindsey will be changing far too many dirty diapers. 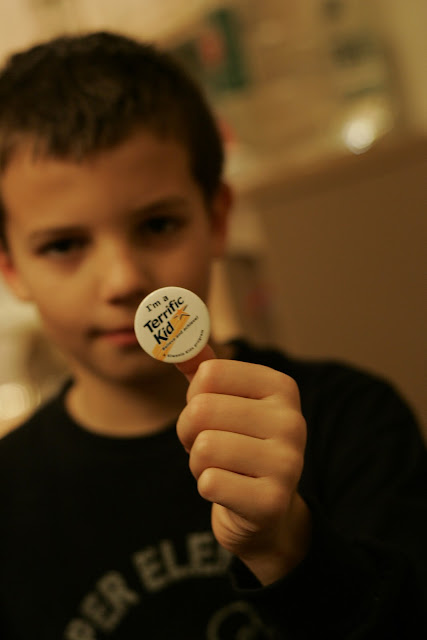 well, he is pretty terrific. I couldn't say it if it wasn't so! He was awarded the I'm a Terrific Kid award for the month of January out of all the kids in the second grade. Pretty big achievement if you ask me and that makes for one super proud aunt. Plus it doesn't hurt that he is so great with Logan and Kaden but especially Logan. That little boy of mine took a liking to Blake and was right by his side all night long. Who could blame him though, did I say he was a Terrific Kid yet? 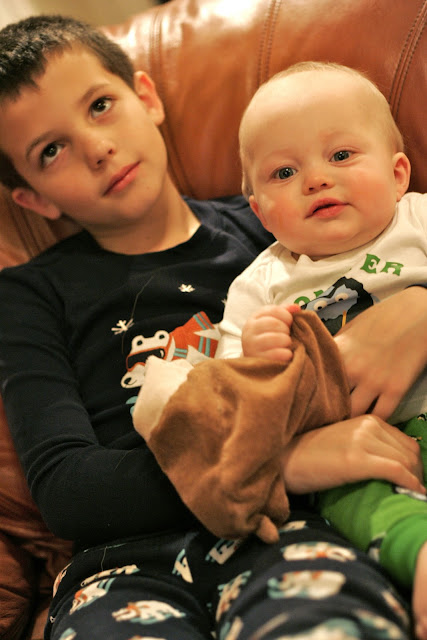 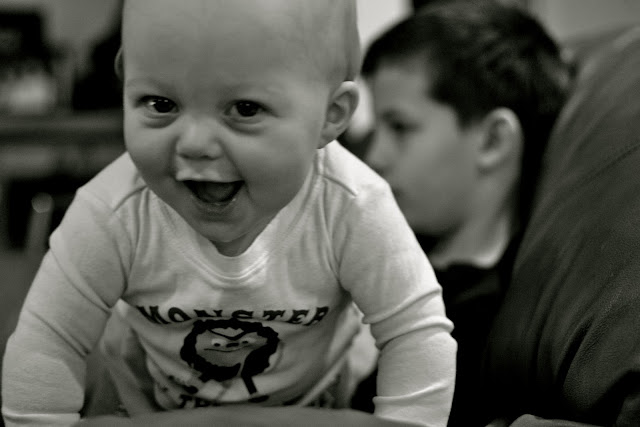 Saturday morning brought work for the big boys and they were up and at it early. Brett decided that shorts would be a good fit for the weekend and Papa Tom wasn't allowing that since they would be outside doing "man" work so out came the hand me downs. And since Papa Tom was pretty sure Brett had never worn such an article of clothing, he made sure to help Brett put them on correctly… 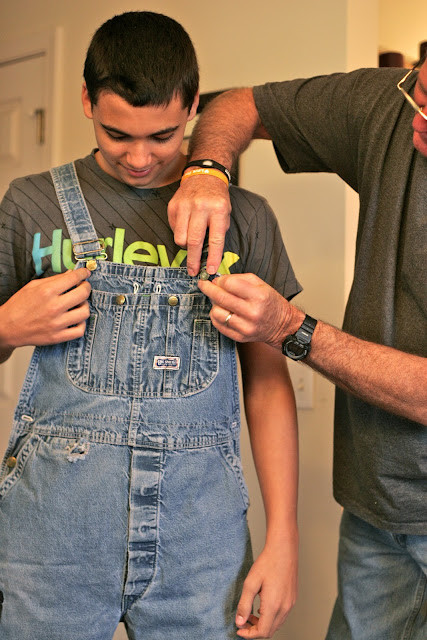 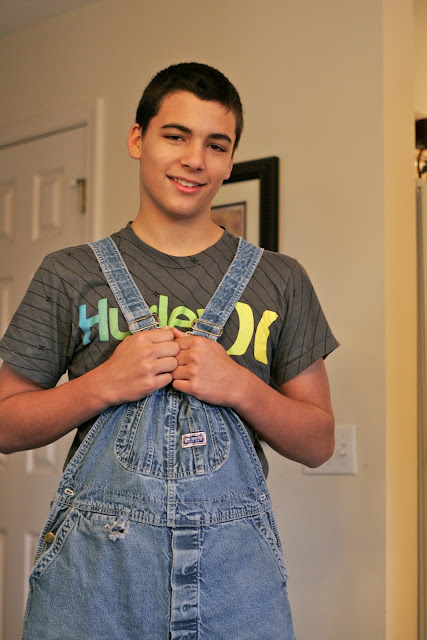 Now that is hot! As much as I would love to post these pictures to FB for all of his friends to see, I promised I wouldn't. I mean at fourteen, something like this could ruin your reputation in junior high and from what I am hearing from his mom and Rob, this kid needs all the help he can get. And I guess it wasn't like he was prancing around in these all morning, he was put to work hauling wood from the woodpile behind the house up to the back door. Sawing a few boards down to size and measuring parts for the garage. Man work or so I was told.
I know, I know. You are probably asking yourself, "How could this get any better? That picture is priceless!" Well, what if I told you those are my dads? Or at least he claims they are. And to that I say, "Maybe in 1982!" 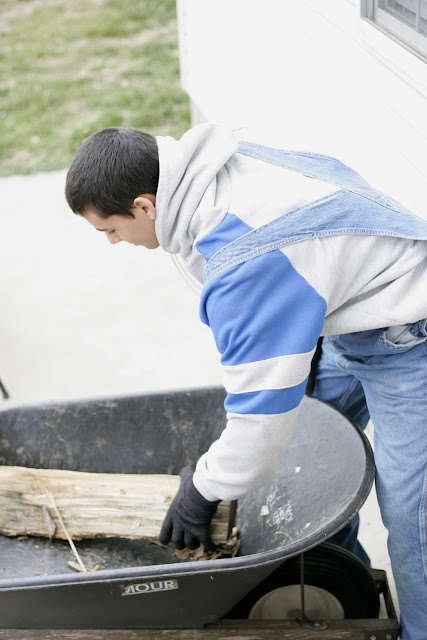 After lunch it was nap time for the boys, Mizzou basketball for Papa and project time for Mommy. Luckily the boys took extra long naps, from having played so hard with the kids, that I was able to get both growth charts done and everything put away before they started to stir. Once they both were up we decided to take a little trip into town to see if we could find Uncle Zack or in this case, Officer Hartley. He was kind enough to meet us back at the CPD, that's cop talk for Carthage Police Department :0) Once we arrived he introduced us to Dawn the dispatcher and then give Kaden his own little badge. It may have just been a sticker but Kaden was really proud of that sticker and didn't want it out of his site! 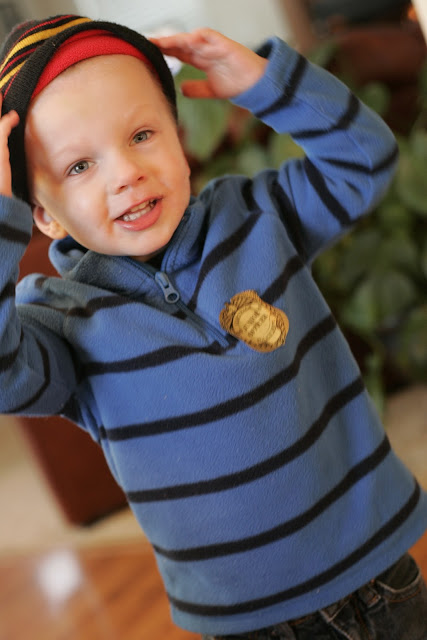 And what trip to Papa Tom's and Grandma Sara's would be complete without your own bag of M&Ms? Kaden sure had a great time eating them! He couldn't just have one at a time-no, he had to have a full handful all at once. 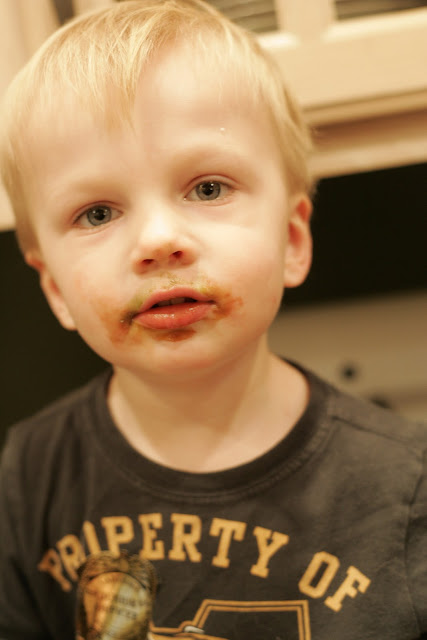 Weekends back home never seem to disappoint. Logan got to show off his new skills by pulling up and chasing after his brother. Kaden provided an endless supply of laughs. He finally warmed up to Aunt Lindsey and had said good-bye to her a couple dozen times before she made it out the door. Grandma Sara got her grandkid fix in and Papa Tom got to fall asleep next to his little buddy. For the record, Papa Tom fell asleep first and Kaden was in awe of just how loud one person can snore.

Thanks for another wonderful weekend Mom and Dad. Weekends at home with the kids are some of my favorites. Maybe this summer we can teach Kaden how to fish!
Posted by Kayla South at 9:39 PM