I am a sucker when it comes to traditions, especially holiday traditions and now that I have my own kiddos they mean even more. Not only is it important that Kaden and Logan grow up with a few of the same traditions that Justin and I grew up with but it is also equally important that we create our own traditions. Which traditions they choose to pass onto their family will be up to them but hopefully, one or two make the cut.

Old Tradition: For me it was all about the ornaments. Each year we would get to add a new ornament to the tree. We each had our individual box, normally an old shoe box, with our name on it and inside were ornaments for each year. 1982-Baby's First Christmas. 1989-Mickey Mouse which we got in Orlando when visiting Disney World. I had a mouse that played basketball, a santa clause snow globe and Flick from A Bug's Life. One look at my ornament box and you could write my biography for me.

After moving out and getting married my mom gave me my ornaments. It was time for them to find their new home in my new home. Each year Justin and I continued with the tradition, adding one ornament for the both of us. After Kaden was born it was his turn to start his own collection. 2009-Baby's First Christmas, 2010-a glass duck, 2011-his hand print. And Logan 2011-Baby's First Christmas and his footprints. 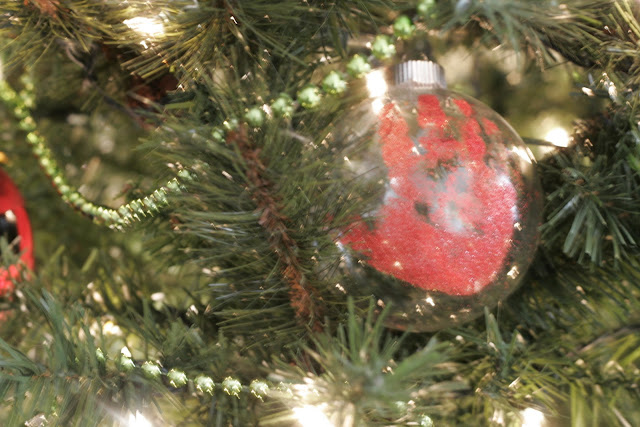 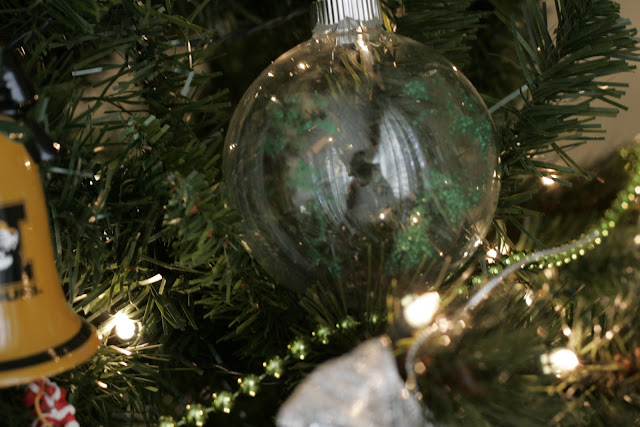 The idea was found on Pinterest. (Do I ever come up with these ideas on my own? I mean really, who has that kind of time!) It was a good idea. It was executed by Angela perfectly and then one said 27 month old started sticking his finger in the glitter and licking it like it was candy. The rest was wiped away but if you look closely Logan's footprints are there. In hindsight I should have sprayed some clear coat on the ornaments...
New Tradition: Elf on the Shelf. This was the first year that Elf on the Shelf made an appearance at the South house and hopefully Kaden and Logan have been good enough to get another visit from their elf next year. We didn't name our elf, we just lovingly refer to him as "Elf". Justin and I figured that next year Kaden can do the naming himself. Can't wait to hear the name he picks out. Lucky for Kaden, Elf seemed to like him. After making his trip to the North Pole each night he would return by morning in a different spot with a smile on his face. Kaden would walk downstairs, looking high and low, searching for Elf. He found him holding his milk. Texting. Reading one of his favorite books. Even hanging upside down. I am sure he will be into a lot more next year and a certain someone might have to get a little more creative. 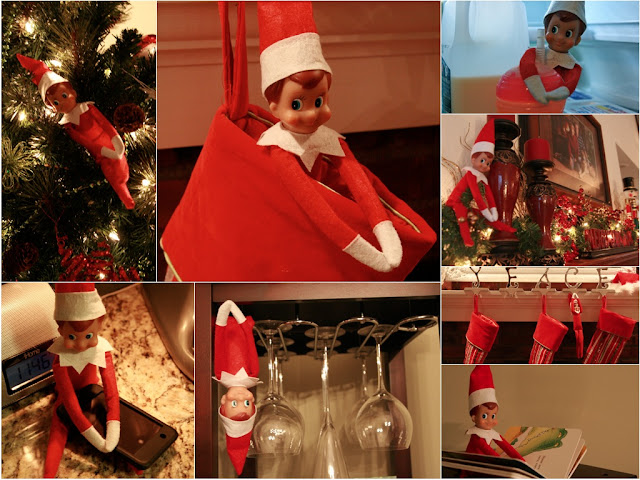 The new traditions aren't over just yet but you'll have to check back on Christmas Eve Eve's for the unveiling and trust me, a picture will definitely be worth a 1000 words. Maybe more if what I am envisioning actually comes true.
Posted by Kayla South at 10:10 PM