A Little Slice of Heaven

Before every holiday my Grandma Hartley spent days prepping for our family gathering. She would make her pie crusts ahead of time and freeze them. Or at least I thought she did-little stinker switched over to Pillsbury when they came out with pie crusts and we all went on believe that she made them all on her own. Whatever she could prep ahead of time she would because she had to, well for her it was because she wanted to. I can still picture it now, her in her holiday apron busy at work in the kitchen, preparing a feast. Ensuring that each family member's favorite dish was on the menu. My request was always the same-Shrimp Cocktail. And although Grandma Hartley was the BEST cook ever, my dinner plate wouldn't have told the same story. It was always on the light side, I was saving room for the dessert. If there was anything that my grandma could do better than her holiday dinners, it was her holiday desserts. So, in honor of Grandma Hartley, I have decided to take a trip down her holiday dessert menu. My first attempt was at her infamous brownie dessert and all I can say is Yummy, Yum, Yum. And because I am feeling so generous and would hate to hoard such a delicious recipe, here it is. Enjoy! 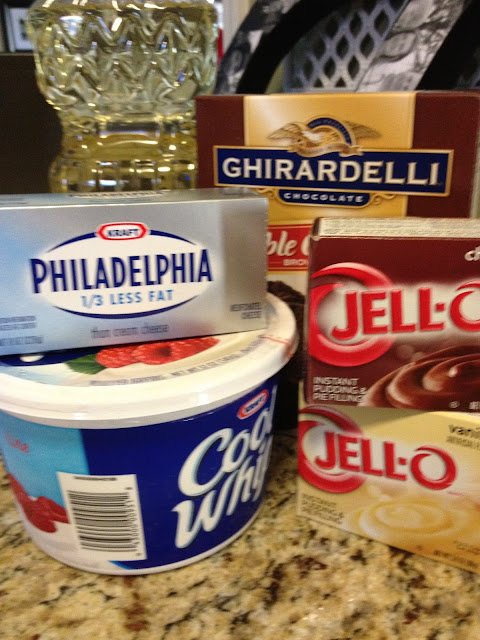 Brownie Mix
8 oz. Cream Cheese
1 Cup Powder Sugar
1 Large Cool Whip
1 instant chocolate pudding
1 instant vanilla pudding
2 1/2 cups milk
1 Hershey bar
Bake brownie mix per box. (I use a 9x13 pan so that the brownie is a little on the thinner side). Let brownie completely cool. Beat cream cheese, powder sugar together and then fold in 1/2 the cool whip. Spread on top of brownie. Mix both puddings and milk together and let set up. Once it has set up (2-3 minutes) spread on top of the cream cheese and cool whip mixture. Layer the last of the cool whip on top and finally garnish with a little shavings of the Hershey bar. Now the fun part…ENJOY!
Posted by Kayla South at 1:09 PM