And what a MERRY one it was! Since we weren't able to be home with the family on Thanksgiving this would be the first time that everyone was together since Jennifer and Rob's wedding followed by Kaden's birthday the next weekend. And that was in AUGUST, in other words, WAY TO LONG AGO. At both of those events, it was just shy of chaos and not that the this past weekend was anything different-it certainly wasn't with 14 people and 3 dogs in one house but we had time. Time to just be together as a family and actually have a conversation. Over the past few years we have pretty much stuck with the same tradition-staying the night at Mom and Dad's on Christmas Eve's Eve and then celebrating on Christmas Eve. We had a pajama party, see here for the awesome pjs that everyone is going to totally be standing in line for. We had the 2011 MarioKart Hartley Tourney. We ate. We drank. We were merry.

Christmas Eve started off later than normal for us. Somehow the boys, well Kaden, slept until 7 o'clock which is a rarity and Logan, well my mom decided she would have him sleep in her room so I am not really sure when that lad woke up. We had kids on blow up mattresses, a kid on the couch and two kiddos who wanted to sleep on the upstairs hallway-we were everywhere. It was perfect. We hadn't been up for  20 minutes and the "when are we eating" questions started coming and of course Grandma had a plan. She had her homemade donuts ready to go for appetizers. Kaden was obsessed with these and he didn't like having to wait for Aunt Jennifer to cut his donuts up one bit… 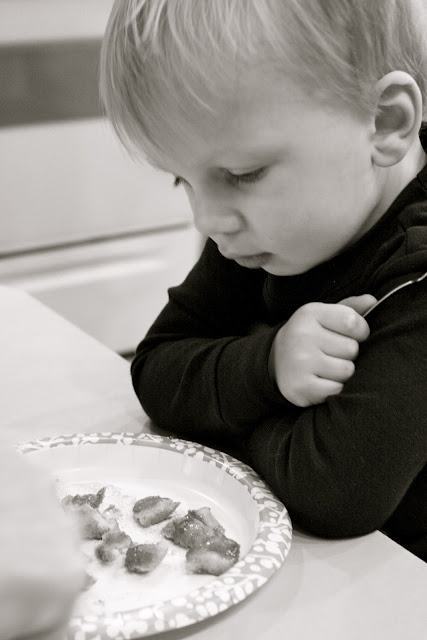 And this little guy had the best seat in the house-Papa Richard's arms. 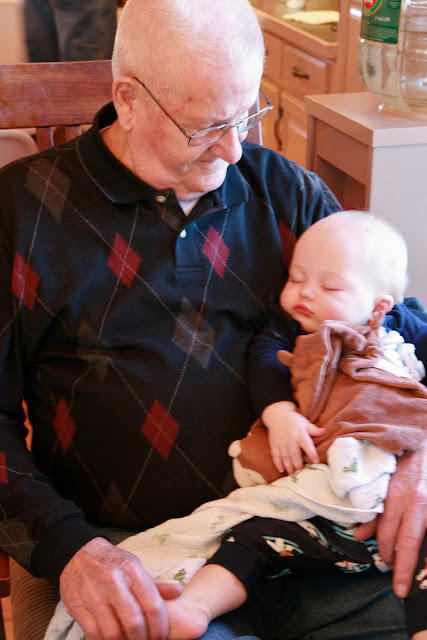 Finally it was the time everyone had been waiting for, especially the kiddos, it was present time. We all gathered in the living room and waited as Kaden helped Blake and Leah passed out the gifts. One by one we took turns opening up a gift. Here are a few of the favs... 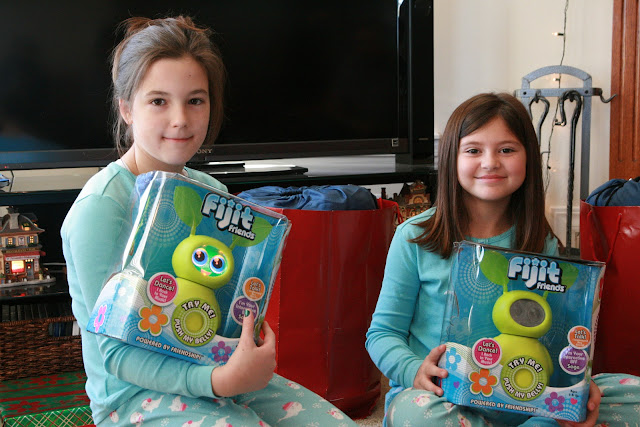 The newest hunter in the family walked away with a new camo backpack that had a built in water dispenser.


Kaden got the ever-so-popular Rock Star Mickey and Logan he ended up with some clothes and some money. 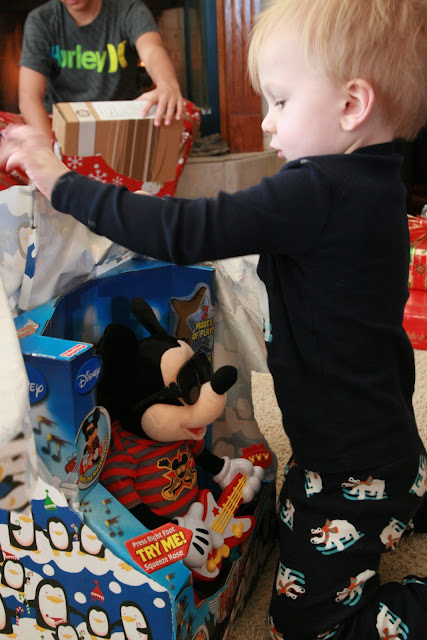 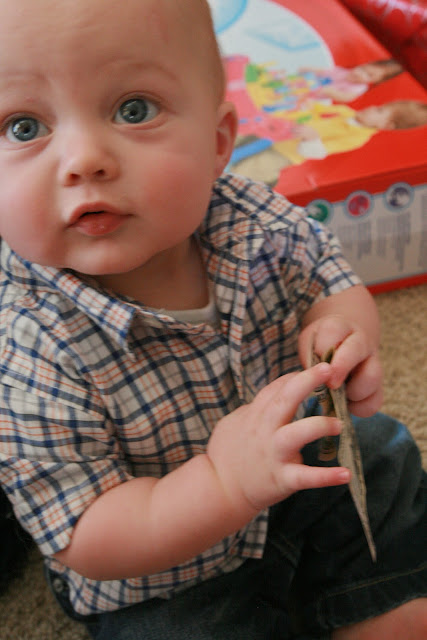 The gifts were great but being with my family, now that is what its all about. As I looked around the room there were so many things people to do be thankful for. It wasn't about the presents, not even the Cloud's giftcard we got, it was about each other. About family. I am blessed to have such a wonderful family and for being able to come together and celebrate the birth of Baby Jesus, for all, he is the reason for the season. 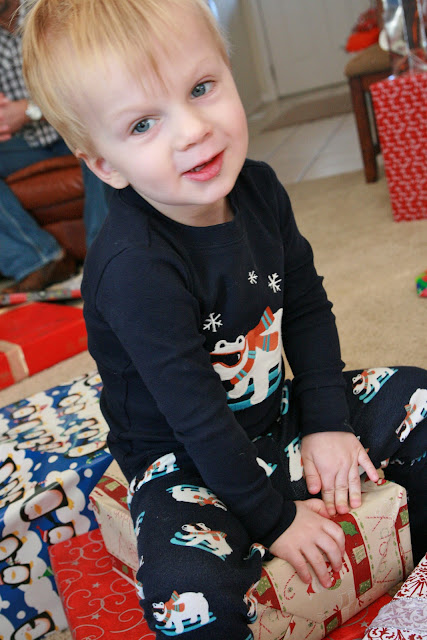 The morning continued with a friendly, yet competitive game of MarioKart. To make sure that everything was fair we drew for seeds and a few individuals were given byes. I can't speak for everyone about their match-ups but as for mine, Round 1=Cake. Round two was my sister-in-law, the wife to the tourney's favorite and I knew not to understand her, it was close but luckily I got a little help from those tiny surprise boxes. The semi-finals were up and I most certainly was the underdog. I was taking on my brother, the gamer. You see, my brother, has a room dedicated to video games. Instead of partying and being all crazy, he plays video games. Don't misunderstand, he has a full time job as a police officer, he is a great husband and takes care of the house things which Lindsey in-trusts him with but in his spare time he games, thus the tournament favorite. He beat me. It was close, but he beat me. I was hoping that he would end up winning it all and then I would have been beat by the tournament championw but low and behold the fourteen year old took it all. Brett is the official 2011 Hartley MarioKart Tourney Campion. 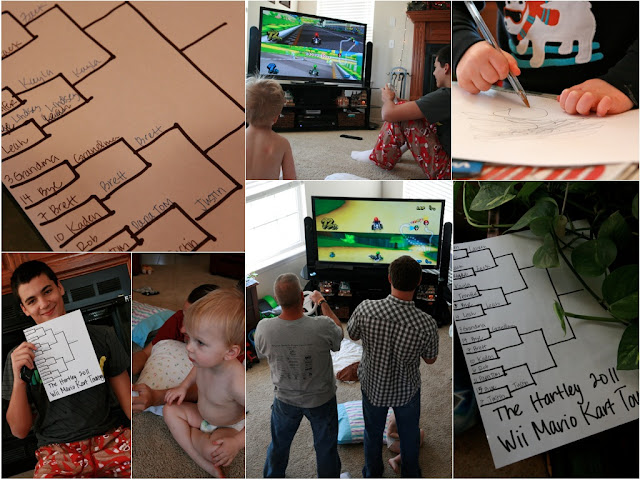 We finished up just in time to watch the Chiefs and for the kids to take their naps. Once everyone was up we headed outside to enjoy the weather. We snuck over the fence and took a few quick pictures before heading off to Christmas Eve's service. Most everyone remained troopers through our little photo shoot except for my youngest nephew, Blake. He wasn't all too happy to have his picture taken but when he finally figured out that the quicker he smiled the quicker we were done, his frowned turned upside down. Christmas Eve's service was the perfect ending to the Hartley Christmas. It gave us time to worship as a family and once again to reflect on our blessings. I stood there with my husband on one side holding Logan and Kaden standing between us holding my hand with my family all around us. Life was good. 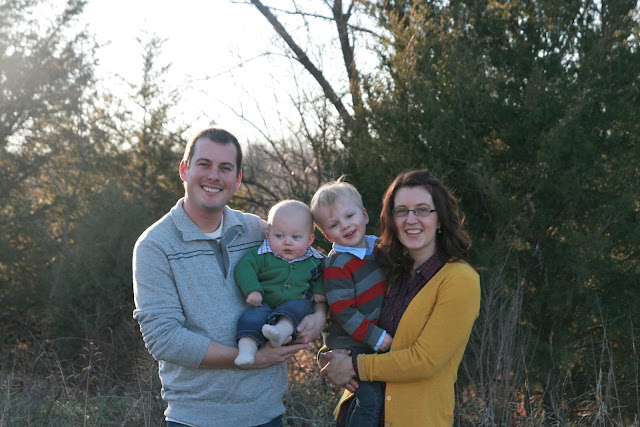 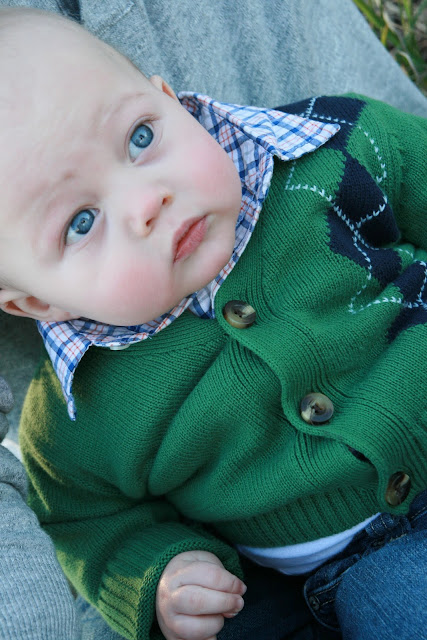 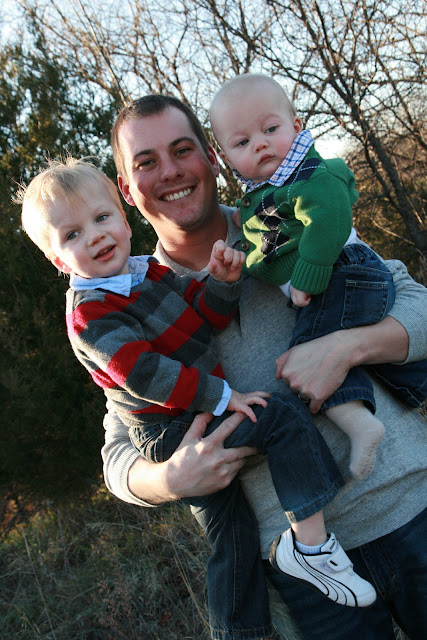 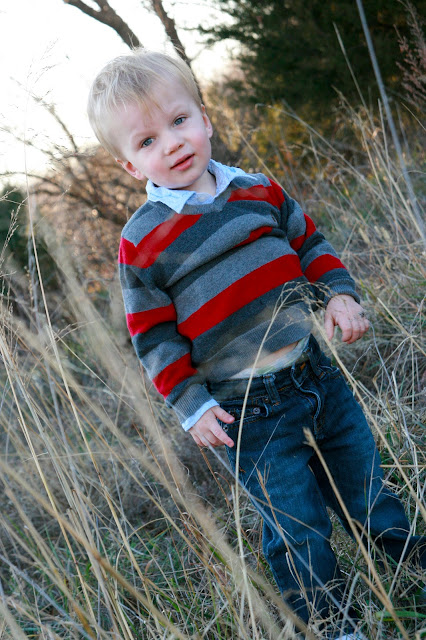 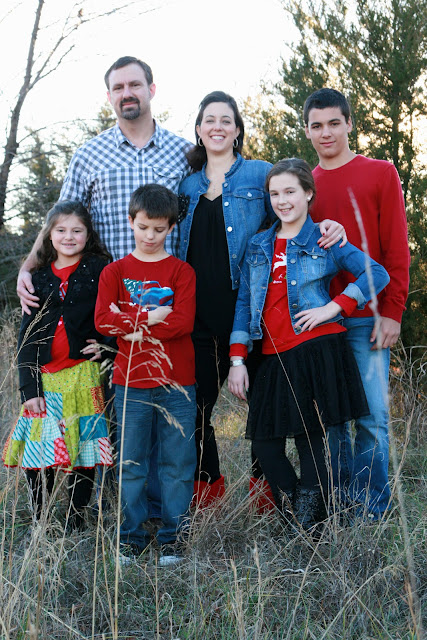 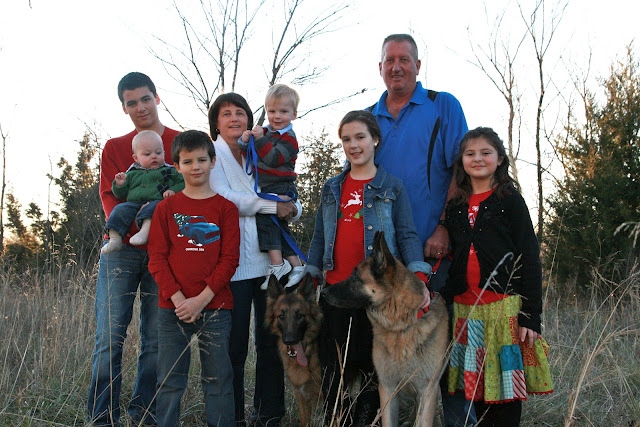 We finished the evening off at Scott and Kelly's for the entire Hartley Family Christmas. Its pretty special when a family of 14 can all get together and not have a conflict but when a family of 24 can do the same, now that is something. We gathered around hot cups of soup and dessert. I had 1/2 a blueberry pie-not all at once but within two days I devoured my portion. A big thanks to Sandy, she makes the best blueberry pie and get this, it isn't for her kids, they don't even like it. Instead she makes it for Jennifer and I. Seeing that blueberry pie makes my heart skip a beat. Delicious.
Finally it was time to head back to Kansas City. We loaded the kids up in their pajamas and arrived back home just before 10:30. We sat down and opened the last book for Advent. We read through Twas the Night Before Christmas, sat out our cookies and milk, said our good-byes to Elf and then tucked our boys into bed. Tomorrow would be Christmas and this mom was giddy with excitement. What a perfect start to our Merry Little Christmas... 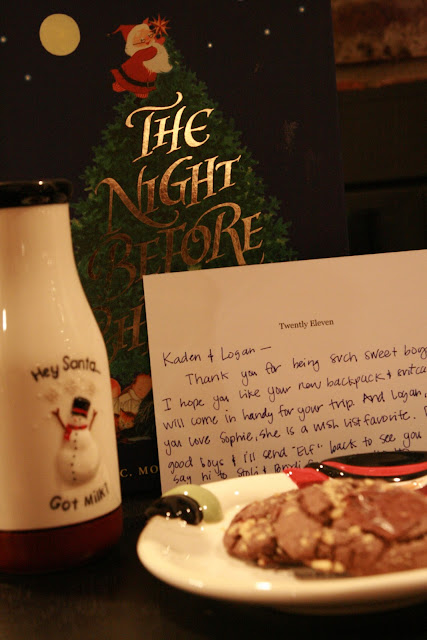