By the looks of it both the boys made it on Santa's "Nice" list. Kaden got the luggage set that he had been pleading for ever since he turned two and Logan actually got some toys he can call his own. 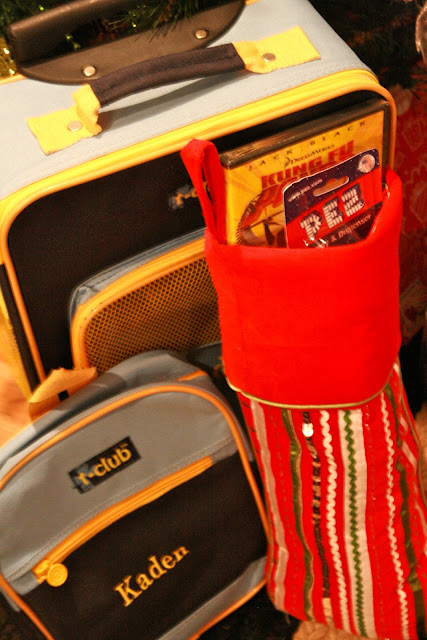 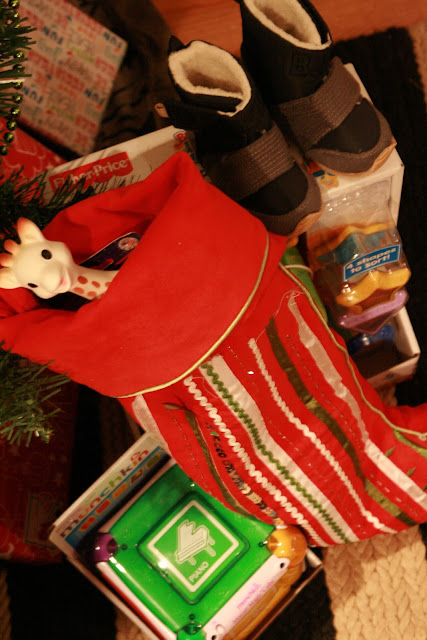 The sad part. I think we already lost Sophie the Giraffe. We headed out this evening to visit Nanny and poor little guy gal isn't anywhere to be found. We have looked high and low, guess we'll be heading back to get another.
It took absolutely no time at all for Kaden to have his backpack on waving goodbye as he headed for the door pulling his suitcase right behind him. It was a hit! 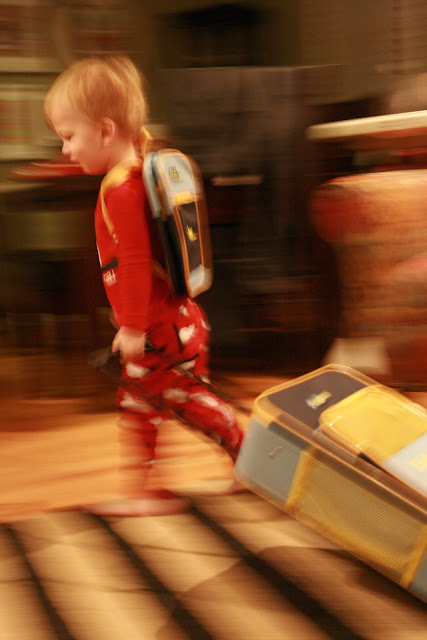 After pulling out every single cop car, toothbrush, boxer briefs and DVD from his stocking we moved to the pile of presents just waiting to be torn into. We started off with great speed but a little halfway through Kaden got a little tired of unwrapping and just wanted to play with his suitcase. Logan just wanted to eat wrapping paper. We finished the unwrapping for them and quickly cleaned up just in time for our guests to arrive. And who wouldn't want to be greeted by the charming boy below... 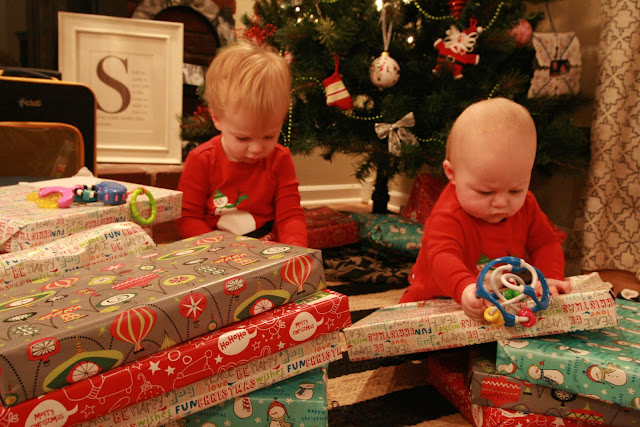 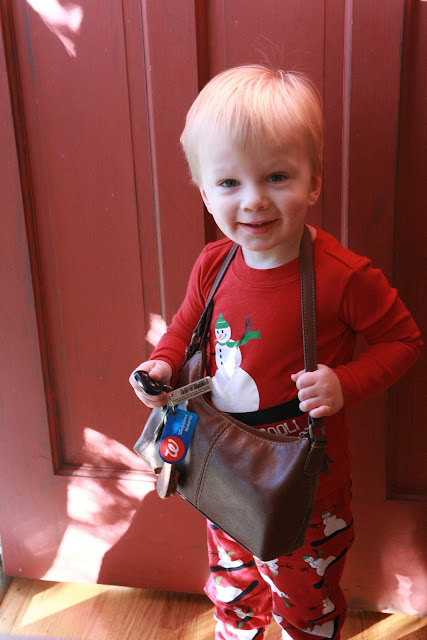 Grammy Janet, Adam, Becky and Colton all came over for a breakfast which would be followed by the South Family Christmas. Justin took care of the cooking while I prepared the table. At first there really wasn't going to be a table but then I remembered that I had a few things left over from the wedding that I could easily make work. Out came a few green napkins which just happened to match the split peas. Some dark place mats and our Crate and Barrel dishes. Simple but festive. 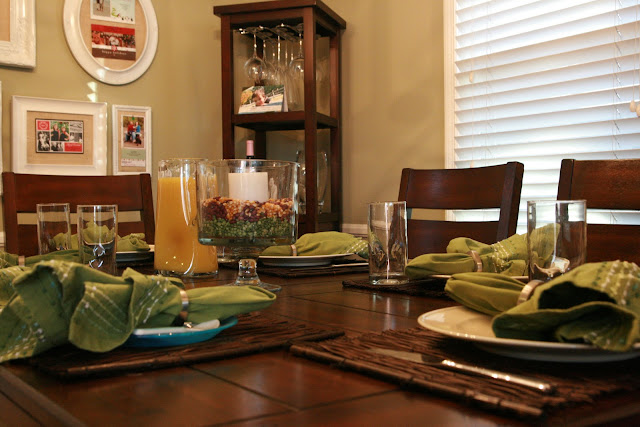 We weren't sure how round two of presents would go since Kaden was only partly interested in opening earlier that morning but slowly we made it through it all. The boys got a few more DVDs and they each (Colton and Kaden) got a portable dvd player to take on their upcoming trips. 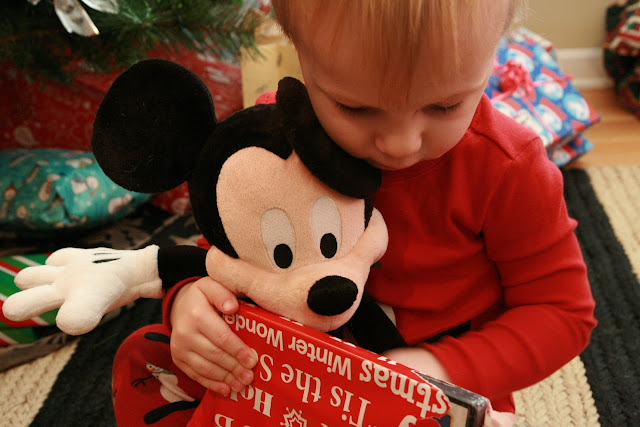 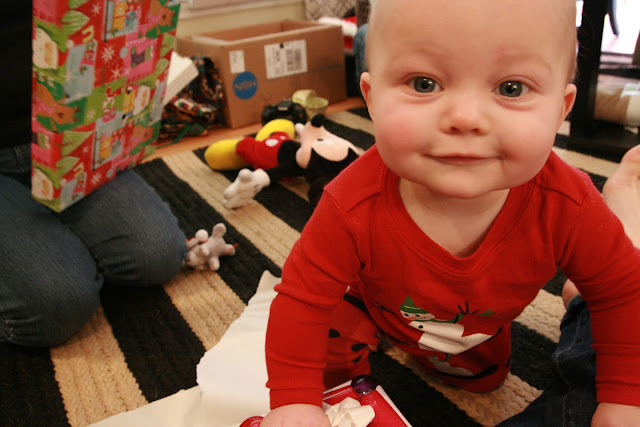 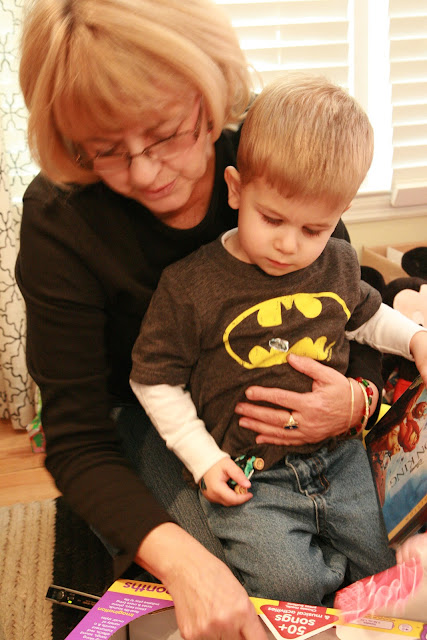 The boys also got their annual picture ornament for the tree and this year it was a picture of each of them in their Halloween costumes. Kaden knew exactly what to do with it too. He turned around and placed it right on the tree. When asked to help Logan hang his, he was a good big brother and placed it right next to his, literally. 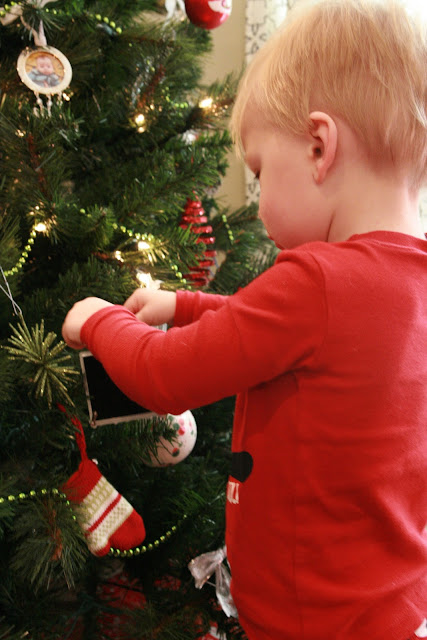 We might not have the biggest family on the South side but we make up for that when it comes to how close we are. I am lucky enough to have this family so close and to be able to get together whenever we would like. There probably isn't a week that doesn't go by that we don't see one another and although it kind of felt like any other day with the family, it still had its special moments. We got to sit back and watch Kaden and Colton play with one another and I could easily picture Logan following at their heels one day in the very near future. These boys are going to be a hoot for some time to come and I am so blessed that I get to sit back and watch it all unfold. 364 days and counting…
Speaking of 364 days-Justin and I have decided that Kaden will be the perfect age to really set the expectations for Christmas next year. This year we scaled backed on the gifts. I mean, lets face it. The kids don't go without anything and probably already have too much so why continue to spend money on things that they just don't need and probably won't play with. Instead we will be buying three gifts for each of the boys. Why three? Because the Wise Men brought three gifts to Baby Jesus when he was born. So from us they will get a gold, silver and bronze gift to represent the Gold, Frankincense and Myrrh. I would love to take credit for this but I got the idea from my sister and frankly, I think it is genius. What a great way to not only incorporate the story of Baby Jesus but also to help teach our children that giving is better than receiving.
Any new holiday traditions that you and your family started this year? Any old traditions that you would like to share? I would love to hear them as we are always looking for fun ideas to do with the boys.
Posted by Kayla South at 10:33 PM