Music To My Ears

Never thought "average" would sounds so good but today it was music to my ears. It has been no secret that I have been a tad worried about Kaden's speech. He says lots of words. I understand what it is that he needs. He just isn't putting two or three words together to form sentences yet. Sure, he has a few short sentences but nothing more than that. At his two year check up they told us to give it a few more months and if things haven't improved to go ahead and set up a speech and hearing assessment. Early November I made the call and scheduled the appointment. At the time I was a little more than worried but the last few weeks things have just been clicking and he has improved quite a bit. I figured that since we already had the appointment scheduled there was no reason to cancel it and frankly getting a professionals opinion is kind of what I needed. Either way, it would make me feel better.

The test lasted a little over two hours. We started with a few hearing tests and Kaden blew through those with flying colors. But then again, we knew he had no issues with hearing us. He follows directions and if he is acting like he can't hear us, it is just that, acting! You see those blue little eyes peek out to the corner of his eye with that cute little smirk. After the hearing screen we then met the speech pathologist. She was very nice and had lots of toys and lots of questions for Justin and I. She sat and played with Kaden. Watched him playing by himself, how he interacted with us and her and even watched his fine motor skills. After answering a number of questions on how Kaden listens to instructions and how he expresses himself she tallied up his score. Before even given us the "score" she told us that she would not be recommending speech therapy and that even if we don't do anything to aid in his speech improving it will happen all on its own. Then the numbers came down. He was above average in his peer group when looking at his receptive language and average when looking at his expressive language. She gave us a few ideas on things we can do throughout the day with him and told us that if we were still worried in 6 months that we could bring him back but that she had a good feeling we wouldn't be seeing her again. She then complimented him on his fine motor skills even went as far as saying she has never seen a two year old hold a pen as perfectly as he does. Its true, the kid can hold a crayon!

It was a good day. 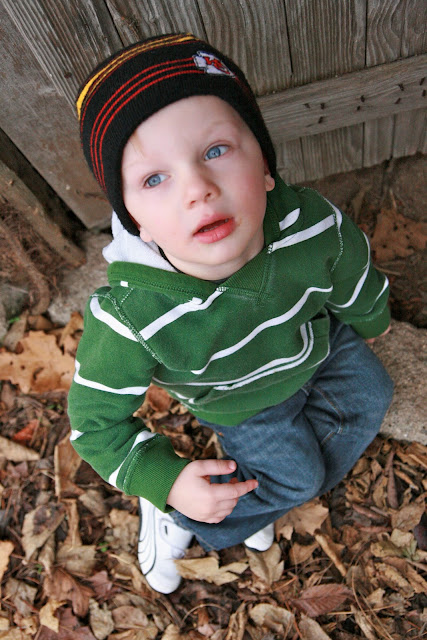