Over the past year a small group of girls-all from college and most all with babies, decided that we needed a girls night once a month. Each month someone would throw out a date and an idea and we would try to make it happen. We always had a great time but it was too short. This time we decided to up the ante-we were going for an all nighter! The husbands pretty much pushed us out the door when we brought this up, they wanted us to have this night or maybe they just wanted a quiet night to watch football. Either way, they took the kids and we took our wallets. Initially it just started out the three of us, Korie, Meghann and myself but at the last minute Laura joined us for dinner, shopping and dessert. But before meeting for dinner we started the day off right with pedicures and a quick trip to SunFresh in Westport to pick up the essentials-wine, candy, donuts and water. We knew our night would be memorable but never thought one of the highlights would occur this early. As we were checking out we saw Westport's finest checking out in the lane next to us. She said no less that 50 curse words all of which were the F word and most of which were directed to a very nice clerk. She proceeded out to the parking lot where she threw her bags at a car and continued her ranting. Spot a crazy, psychotic woman for the night-Check.

It was also a night of firsts but a night of favorites too. Meghann's first time eating at PF Changs, Korie's favorite. Korie's first purchase of BR skinny jeans (she looked hot in them, you're welcome Scott!), my favorite place to shop (at least right now-I have like half the store, it's kind of sad). My first time eating at Melting Pot-even if it was just dessert, another one of Korie's favorites. It was the perfect mixture of good food, good shopping and good conversation with great people. And I am sure I can speak for all of us, it was just what these Mommies needed!

And I'll let you in on a couple little secrets. While heading out to dinner and in the elevator, we were invited to a wedding reception by the FOTB (Father of the Bride). He was nervous but looked so cute in his tux. Best part, we think he was really series. He saw how much fun we were already having and knew it was a solid decision on his part. Sadly we didn't take him up on his offer. After returning to the hotel we walked around P&L. After all it was Halloween and this would make for great people watching. It did not disappoint. I won't say what we saw but WOW, I think I actually peed my pants a little and Meghann she was insisting on following this chick and getting a closer look but I was certain we would have gotten the crap beat out of us so we headed back to the hotel. And probably the best secret, when we went to bed. I was fully prepared for an all nighter. To stay up and talk. Talk about our kids, work, our husbands and families. Gossip about this person or that person. Drink wine and eat all the junk we bought earlier. Truth be told, I don't think I saw midnight. Actually it might have been more like 11 or 11:30 at the latest and the food and wine weren't even touched. We were out, not drunk out, dead tired out.

A big thanks to our Babies' Daddies. We really appreciate you giving us the night out and don't worry our next one isn't for another 2 weeks. ;0) 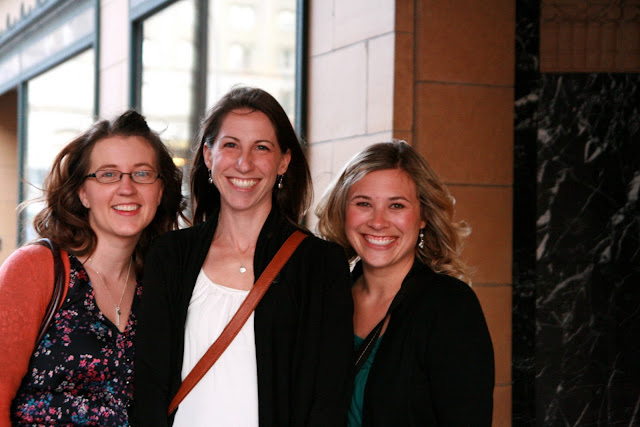 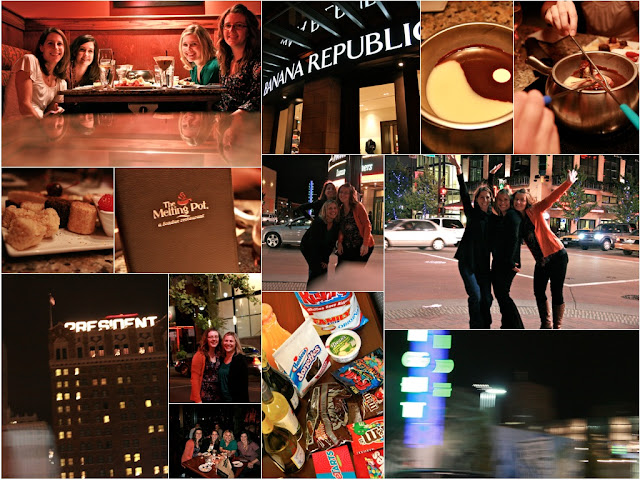