If you have spent any time with Justin and I over the last year you know just how much we love Ms. Brenda. Kaden has gone to Ms. Brenda's for a little over a year now and Logan has been there for about two months and we couldn't be happier. Not only does she provide a safe and loving atmosphere for our boys but she teaches them just as much. In the last month Kaden has been incorporated into circle time and learning time, before he would always play as the bigger kids would sit and learn. Well now, he is that bigger kid. This past month they have been studying zoo animals. They sing songs, they read books, they play with zoo animal toys and they make crafts that go along with each of the animals they learn about. He can now say "ele-pant" and has brought home some of the cutest artwork a momma has laid eyes on. (And all this artwork has inspired yet another Pinterest project but once again, more to come on this later.)

Since the kids have been learning about zoo animals all week long, what better way to end a month long lesson than with a trip to the zoo. We got both boys dressed this morning and packed Kaden a sack lunch. As we headed out the door he graciously posed for a split second so that I could capture their first field trip together, as brothers. The zoo was a hit. They all had so much fun and its days like today that I don't feel so guilty about being a working mother and sending them to daycare because let's face it, Ms. Brenda's is anything but a daycare. 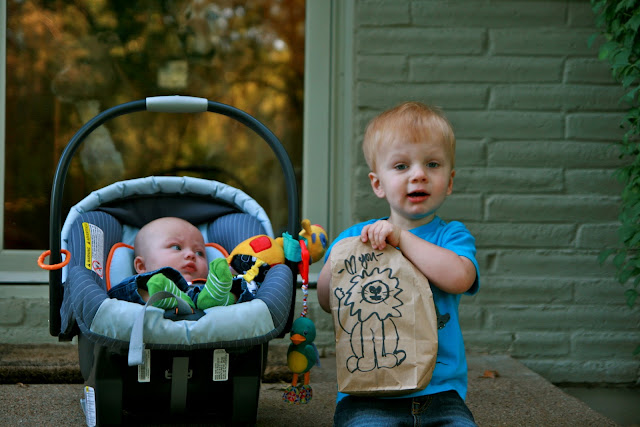