My husband makes fun of me when it comes to celebrating birthdays. To me, they should be birthWEEKS or even better, birthMONTHS cause I tend to milk them for as much as I can, especially when it comes to Monkey. Last weekend was the birthday party, Wednesday was his BIRTHday and this weekend well it was all about him too. On Friday night we rented Rio and Kaden was captivated from the moment the colorful birds came on the screen. Daddy and I might have gotten a little sleepy during the movie but not Kaden, he would chuckle when things were funny (I love that he gets humor now) and would do a little jig when the music came on.  First thing the next morning, it was back on. We had it for 24 hours and we were going to get our monies worth!

Saturday was game day. We all put on our Mizzou gear and had a little birthday BBQ for who else…Aunt Becky, that is who-see I can share! Since we had done something for Janet and for Kaden we wanted to do something with Becky too. So Kaden and Cousin Colton spent the next few hours chasing after one another. (He slept soooo good at nap time). After he woke up we walked out the front door with Jake and Jennifer to try out luck out at Dave and Busters. Jennifer instantly found PacMan (I think there is some sort of magnetic attraction because we were there two minutes and she had already located it). Of course, Jennifer went on to top her all time high score, she rocks! Justin and I had our every-time-we-are-at-arcade-pop-a-shot-match and for the first time, he beat me. For the record, there was a two year old at my side and he was stealing my basketballs! Up next Deal or No Deal and man, if this was the real deal, we would have walked away with the million! We won the top prize of 600 tickets, the lucky case you ask, case number 2-for Kaden's 2nd birthday of course! Dinner was at the Yard House which was delicious. The only casualties came in the form of a few bruises. Kaden fell as he was running and skinned up his face. He tripped over his own two feet as he sat down next to a wall and instead of sitting ran smack dab into it. And fell once more before the night was over. Dad the balance bracelet is going back on as soon as he is asleep!

We woke up bright and early so that we could be at the zoo right as it opened. This time we were heading to Australia and the Tiger Trail, saving Africa for another time. We arrived just as they were feeding Mr. Polar Bear. Usually he is doing flip after flip but for once we got to see him out of the water eating what looked like dog food and carrots. Water must be a lot like TV because he really did look a lot bigger when he was doing his flips. We got to enjoy the kangaroos jumping around and the sheep up close and personal. It was a great start to our Sunday and we finished the day off with some meatball sliders at Jake and Jenn's.

The weather has been such a relief. We have been able to enjoy so much of our time outside playing. We have been to the park. We have been in our front yard. We went to the zoo, the Legends. And the past few days Kaden has napped like he has never napped before. I loved getting him out of the house and away from his normal toys and tv and to get his brain working in a different way, to watch him run (and fall) and to play till his heart was content. We have had a great birthday weekend and I can't wait until next weekend so we can do it all over again. I hear the circus is coming to town!! 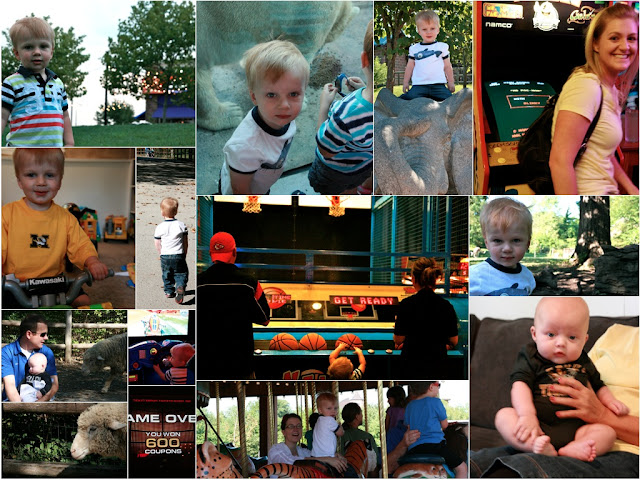