In-A-Sort-Of-Kind-Of-Way. After our fun play date with Hannah and Jake yesterday we swung by Grammy Janet's house to pick her up for a SUPER late lunch. Actually we didn't even eat but those who we were meeting certainly did along with tons of other people but more on that later.

Okay, it's later. Every other week Justin's Dad's Aunts and Uncle get together for lunch in Independence. They all pile into Junior and Lorraine's car and head down to the Hometown Buffet at 2:30, not any earlier and not any later, 2:30 on the dot, thus the reason we didn't eat. And let me tell you, this place was so busy. Yes, there were a lot of elderly people but I was so surprised by the amount of families eating at 2:30 and the last time we were there it was just as busy plus, there was a wedding reception happening. Who would have thought.

There were a few people missing and Janet had to stand in. Junior and Lorraine are married and Wilma and Letha are Junior's sisters. They have another sister named Ruth. Ruth was Justin's paternal grandmother and sadly passed away a few years back. So the fact that we get to see and spend time with his great aunts and uncle and the kiddos great, great aunts and uncle is well, great. Janet was a trooper and stood in at picture time for both Dave and Justin since Justin was enjoying some time at the lake with his buddies. So there you have it, as close as we will get to a four generation picture on Justin's dad's side.

I really wanted to keep this post light hearted but its kind of hard to do when you think about the people that your kids won't get to meet. I would have loved to see my kids with my Grandma Hartley, she would have got a kick out of Kaden and just would have loved holding him and scratching his back. I would have loved to have seen my Grandpa Earl holding Logan (he luckily got to meet Kaden) and talking about all his coyote hunts. But I think most of all, I would have liked for our boys to meet Justin's dad. To watch him teach our boys how to bowl would have been something. We are lucky, we have pictures of Justin and his dad and we are at a place now that we can talk about Dave. We will be able to share stories with the kids so when they grow up, they will know all about him. But it just isn't the same and that sucks. The silver lining, I know they are all watching over our kiddos and keeping them safe but I hope they all know how badly they are missed and how we are constantly thinking about them. 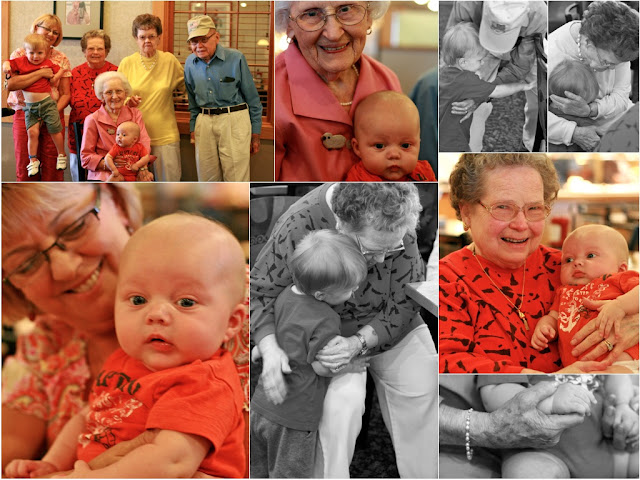