Two Clicks of the Heels

It was time. Time to load up both kiddos and take a trip to mom and dad's to show Logan off to a few family members and so that we could meet the newest addition to the Earl Family, Gracey Jo. I probably would have done this trip before now but was a little worried on driving alone with both Kaden and Logan for the 2 hours it takes to get home but I put my big girl panties on and got to driving. Logan slept the entire time there and back and Kaden gabbed the entire time there and back-not bad for the first trip!

I have said it once and I will say it again, there is NO place like home. Pulling into my parent's driveway just relaxes me and I know we are in for a great time, even if all we do is stay at their house. Watching Kaden explore every inch of Papa Tom and Grandma Sara's land is something pretty special. The weather the past few days was great and Papa Tom and Kaden spent the a lot of their time outside. When Grandma Sara got off work they three of them got out the garden hose and allowed Kaden to water the garden but instead of watering the garden he went after them with the hose. He would act as though he was watering and when they got close, he would turn on them and Papa Tom would jump 10 feet in the air and Kaden just chuckled. The laughs continued through the night and I just sat back with the biggest smile on my face.

Tuesday rolled around and we headed to Springfield to meet up with Casey Jo, Gracey Jo and Melanie. Gracey Jo is such a cutie and looks just like her daddy. Gracey Jo and Logan are a little over 2 weeks apart, Logan being the older of the two but Casey Jo likes to refer to Gracey Jo as their future middle line-backer and if her feet are any indication of the future they might just be right. We ended Tuesday night with a burgers and fries at mom and dad's-my sister brought the kiddos up, Zack and Lindsey stopped by and Grandpa Richard came over too. The Hartley family was all together and it felt good. We sat around shared stories, we did Kaden's hair and we passed the baby around. Brett and Blake were in a little bit of trouble from earlier in the day and spent some of their time working on writing scripture. They were to find certain versus in the Bible and write them the-number-of-years-they-were-old-times. One of these days those boys will realize just how lucky they are to have one another and won't believe how much they enjoyed picking on each other when they were younger. Similar to their mom and I's relationship-man was she a mean older sister but then one day, the switch just flipped and she became a best friend... 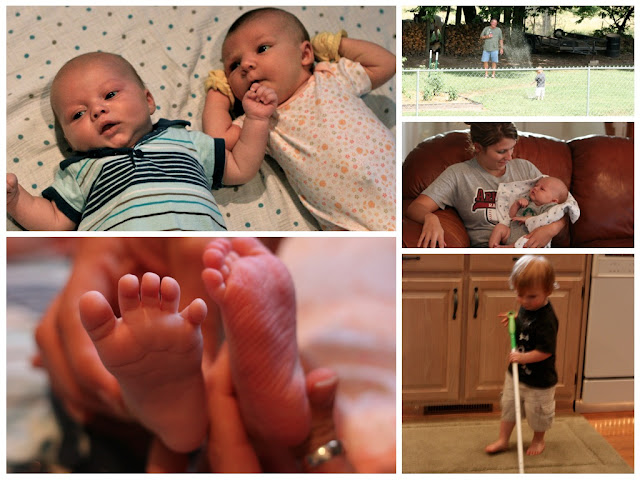 Wednesday came too quickly and it was time to load up and head back to KC but we weren't coming back alone, Blake was coming to spend the next few days with us and Kaden was super excited. We made one very important stop on the way home, to introduce Logan to Grandma Hartley. It has been too long since the last time I stopped by and it is important to me for Kaden and Logan to know who their Grandma Hartley was and I don't think it is ever to early to share the wonderful stories of her life. Next time through we will be stopping and seeing Grandpa Earl, we have lots of stories to share of him as well.

As with every trip back home, it was hard to leave. We have it pretty good while at home. Kaden eats cheese all day long. I get to sit and hold Logan all day long. Wait I do that already! I get to sit and hold Logan while not running after Kaden since Kaden wants to play with Papa Tom and Grandma Sara, he could care less what I am doing. We all get our favorite meals and all the family flocks to see us. Simply put, we are spoiled and I can never get enough of it. 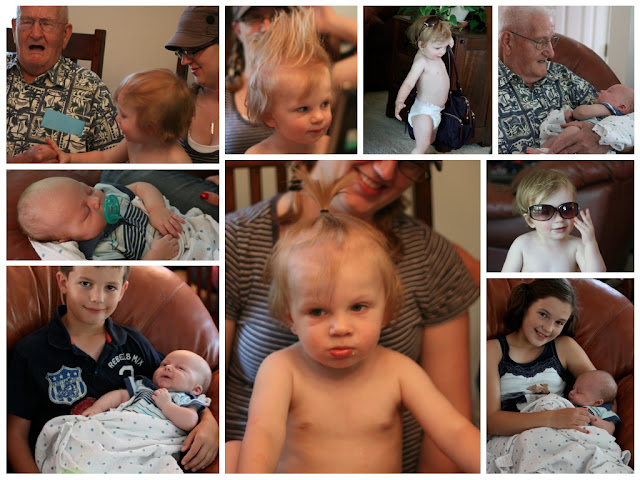 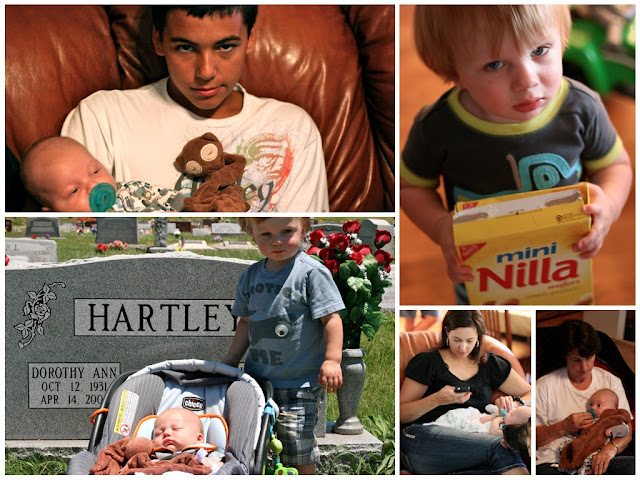