Apologies to those who are following along with the 12 week crash course to better pictures, this post  is a few days behind but none-the-less, here it is.

Shutter Speed is how quickly the shutter operates. A faster shutter speed will freeze action whereas a slower shutter speed can create a blurred effect. Shutter speed is noted by numbers like 60, 120, 250...but these actually represent 1/60th of a second. The higher the bottom number on the fraction, the faster the shutter speed. General rule, if you are holding your camera, keep the shutter speed at a minimum of 1/60th and hold your breath to help steady the picture. Increase your shutter speed for objects in motion.

(For the full rundown of lesson two, click here for the link to the blog.)

Weekly Challenge: The Kitchen Sink Test
Move the camera off of the "green" square to the "TV" setting. Since I was inside, I increased my ISO to 800, placed a glass upside down in the sink to obstruct the water flow and used hot water. First I took a picture with a shutter speed of 1/80th and then increased it to 1/1250. 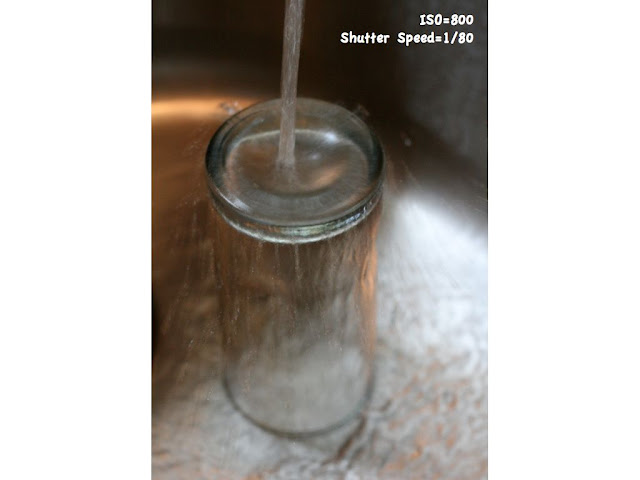 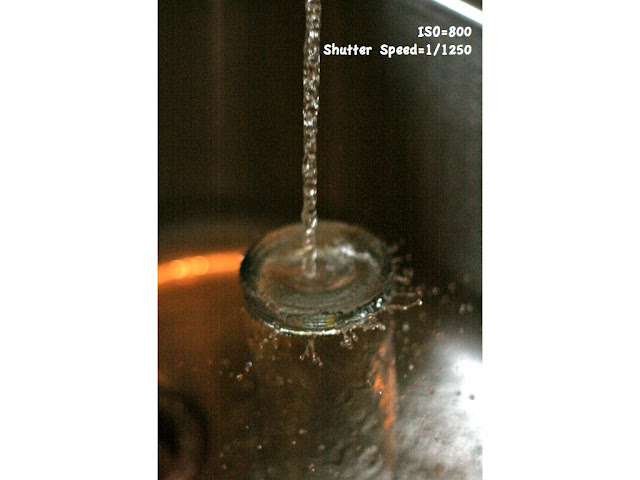 With a faster shutter speed used in the second picture, I was able to freeze the water in motion. Pretty easy, at least if felt like it!

Lesson Two-Part Two: But wait, There's More!
Part two has to do with achieving a BALANCE while using the f/stop, ISO and shutter speed together but to be honest, my first time through I failed, a BIG FAT F, and decided that this would be a project for Monday. On my behalf, I did have a couple of cute little boys biding for my attention so putting it off one more day wasn't going to hurt anyone.

Good Luck, hope you all were able to learn something new, I know I am. Now it is just making sure that I put all these new tools to work.
Posted by Kayla South at 10:40 PM