Its Our Turn Now

Over the past week we have had my mom staying with us and helping out wherever she is needed. She did laundry (we asked her not to). She picked up Kaden at daycare, bathed Kaden, played with Kaden and then put the toys away when they were done. She held Logan, changed Logan and fed Logan while we spent time with Kaden or I caught up on some sleep. She was such a blessing to have here during this transition time and then Friday came. Friday was a day in which we weren't sure we wanted to arrive, Grandma Sara would be leaving to go home to Papa Tom. We knew we would be getting a few more visitors on Friday that would stay over to Saturday but I wasn't sure they would be Grandma Sara material and I was partly right. Before Grandma Sara took off for home, my sister, Mike, Leah and Blake pulled into our drive. Leah and Blake were very excited to meet their newest cousin but weren't able to fight off their mom when it came to who got to hold him first. After a couple hours of everyone being together, Grandma Sara said goodbye and headed home. As she left, I remembered looking at Kaden and wondering who was more sad-Me, Kaden or my mom and as she pulled away, Kaden just watched out the window waving the saddest wave I have ever seen and if waves could talk, it would have said, "Don't Go Grandma!"

It took Kaden a little while to warm up to both Blake and Leah but once he did, he had two new buddies. The three of them played so well together and burned so much energy that bedtime was a piece of cake! Blakers decided that he would like to sleep with me and help out with the nightly feedings and changes-who couldn't use a little help, right? Wrong! Blake snoozed through the entire night and wasn't even disturbed by the crying of a 7 day old. Morning finally rolled around the kiddos picked up right where they left off and when it was time for them to head on home, hugs were shared by all.

We were finally alone. Just the four of us. After dinner and bath time we settled in for the ABC Family movie, Monsters Inc. As I sat there holding Logan on my chest and watching Kaden sitting on his Daddy's lap while in a movie trance, it hit me. Our family is complete. I had been waiting for some sort of feeling of completeness but it just wasn't coming but as soon as the house was quiet and we were on our own, it came. It was such a powerful and emotional feeling. Then Kaden pulled out his beanbag chair, climbed in and started "telling me" that Logan should come and sit by him. I did as instructed and just sat back and watched as my boys continued to form a special bond that only brothers can.

This is going to be a real good life! 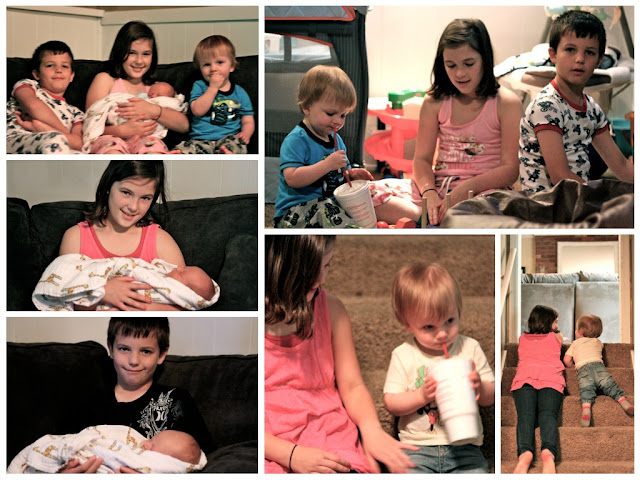 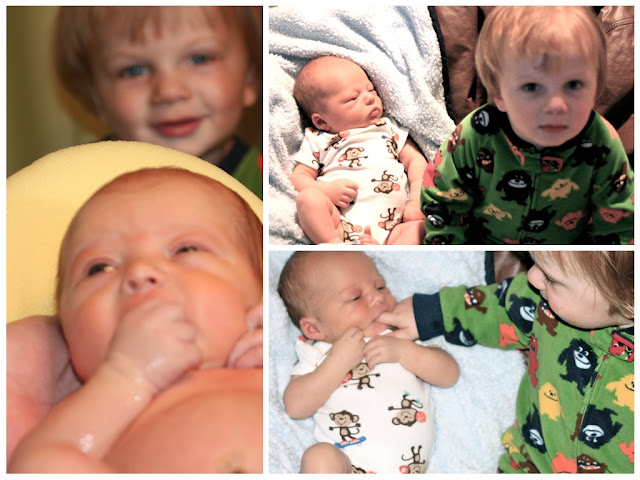