I thought it would be fun to share a few things about the Logan's delivery, the labor, all the transitions, and day to day life of our new family of four.

1. Logan is a GREAT baby. (finding wood to knock on-whew, glad I got that taken care of) Yes, he sleeps a lot right now and over the last couple of days he has been a little more fussy but a little mylicon and that problem has been taken care of! He is very laid back, very cuddly and I hate putting him down so I don't. He is just a sweet little blessing.

2. Kaden is a GREAT big brother. He loves holding Logan, he loves swinging Logan and he really likes to stick his finger in Logan's pacifier to help hold it in place. He continues to flourish and is learning so many new things and words right now. Let's just say the camera is being used a lot to capture all he does! He does have his tantrums, the terrible twos are creeping in but for the most part, he is a very happy 20 month old. 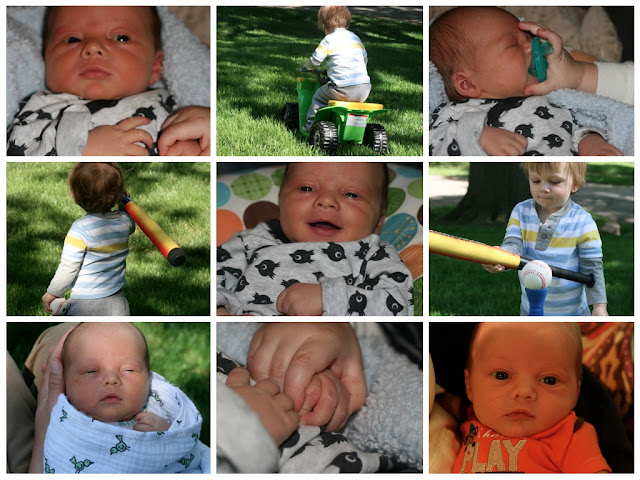 3. Diapers. Diapers. Diapers. and when you think you couldn't change another one, DIAPERS. Not only does Logan seem to dirty a diaper as soon as I put a clean one on, he also likes to pee all over at least 3 outfits a day. I may just prefer changing Kaden's diaper over Logan's, whoever said a newborns diaper doesn't stink, hasn't smelled Lil Logie's. And what about size! Changing a newborn's diaper makes changing a 20 month old's diaper like putting a tarp on a boat. I can't believe how big Kaden's diapers are compared to Logan's and he is only in a size 4! 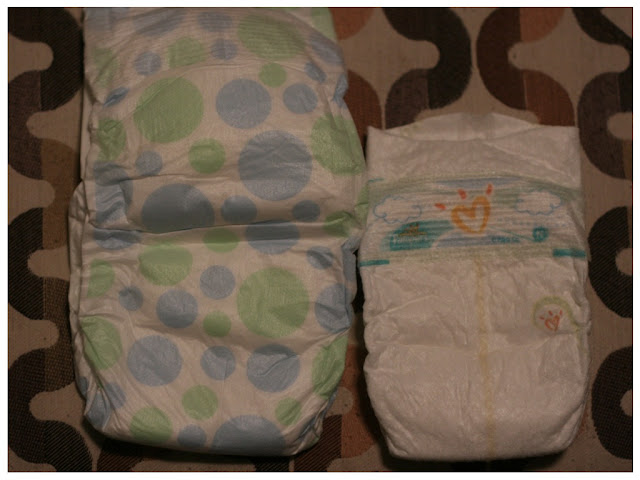 4. Labor. Piece of cake this time around. I decided to forgo the stadol, this drug made me so loopy with Kaden and I wasn't really aware of what was going on so we skipped it with Logan. I was much more aware and present and enjoyed the experience so much more. We went in the night before and contractions started on their own but at 8 am on Friday we decided to start the pitocin and in 4 hours went from a 2 to a 10 and we were ready to push. After 20 short minutes of pushing, Logan arrived. It was short, sweet, and pretty amazing. I can remember having a pretty hard time getting to my feet with Kaden but this time around, I was up and walking in no time-the epidural wore off at just the right time. I  even was up for visitors after having had Logan which is nuts because last time, I cried knowing visitors were waiting to see us shortly after Kaden arrived. I knew the pain that I was in for but the entire stay, I took two pain pills-it wasn't anything like I had remembered. Although my labor with Kaden wasn't bad by any means, Logan blew it out of the water, it was like a day at the park and I came home with the biggest prize ever!

5. Me. During this pregnancy I gained 15 pounds less than what I gained with Kaden. I won't say the actual numbers that I gained but you can probably take a pretty good guess and come close to both figures. It took me 6 months to fit into a pair of jeans that I felt comfortable in with Kaden, it took me 9 days to button those same jeans this time around! I had Kaden the last day of August and in October, at a friends wedding someone (he was wasted) asked me when the baby was due and I politely explained that he was born about 5 weeks earlier. Granted, I didn't feel great about myself and knew I had a lot to lose but REALLY, kick a girl while she is down why don't ya! Guess it is safe to say that I still looked multiple months pregnant at that time. With the help of Belly Bandit, that isn't the case this time around. Yes, I have a nice flabby belly that needs to tighten up but I don't think I look pregnant which is AWESOME! Jeans fit, shirts fit-and we are only two weeks in!

6. Life with 2. Fulfilling in every way. Yes, it is hard work. Yes, sometimes I am worn out and exhausted but it is all so worth it. Our evenings have been spent playing in our family room and then we end them with each one of us with one of the boys in our hands until they fall asleep and we move them to their beds. Our mornings begin with all 4 of us, plus the dogs, in bed watching Handy Manny and feeding Logan. Logan spends his days eating and sleeping and once in awhile is able to work some awake time in. Kaden spends his days playing with all his friends at daycare. I spend my days doing things around the house, checking work emails and keeping the little man fed. Daddy is spending his days working and then when he gets home, he starts dinner. I hope to surprise him one day with dinner already done but he is such a good cook and I, well I frankly suck at it! All in all, life is good.

Two Weeks Old-We had his 2 week appointment yesterday and he got a great report card. We are now 7 pounds 15 ounces and 20 1/4 inches long. 25th percentile across the board and the best news, since he is over his birthweight, he doesn't have to be woken up at night to eat! Hopefully he cherishes his sleep and will fall right in line! 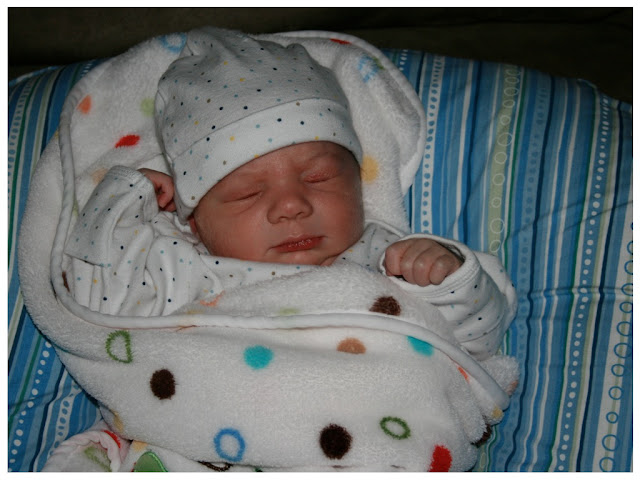 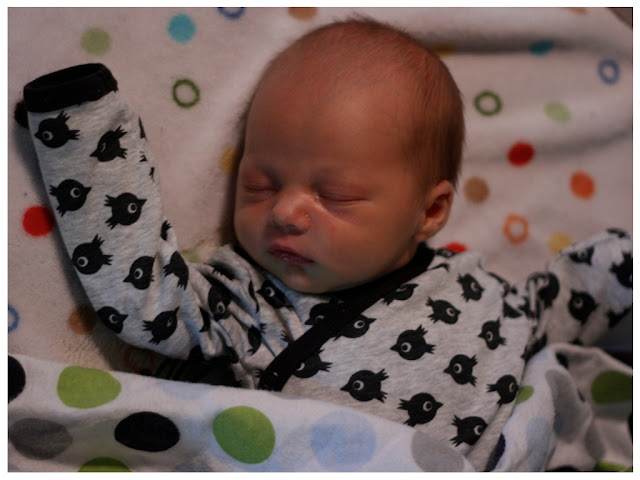