We have made it another week but at this point who is counting? ME! That's who is counting and I am counting every second, every hour of every day and Logan couldn't be in my arms quick enough. It isn't that I want the pregnancy to be over, I just want to meet my little baby boy.

I recently reread a few posts from when I was pregnant with Kaden and when he was first born and I can tell you that the things are certainly different this time around. For instance, I am not worried about the actual delivery of this baby but instead I am worried about leaving Kaden for a few days and him wondering or thinking that Mommy doesn't love him as much.

Speaking of weight, this pregnancy, I have gained 18 less pounds than the first time around and no, I will not say what I have gained this time or last time because frankly it is kind of embarrassing and took way too long to get back into my pre-pregnancy jeans.

I have also experienced little, if no swelling which has been amazing in itself because I haven't had to resort to flip flops yet!

Sleep, was tough while pregnant with Kaden, sleep now, impossible. Logan moves at all times of the night and when he moves, he MOVES but then again, I guess I need to get use to it because I see a lack of sleep in the near future.

So are we ready for this? As ready as we ever will be. We have all the baby gear items ready to go. Pack and Play up, bouncy seats assembled and placed strategically throughout the house, crib is raised back up for an infant to sleep in, diapers and wipes are out, infant bathtub is accessible, clothes and blankets washed-we are ready when it comes to the baby gear. Are we ready emotionally is the bigger question, probably not but I do know that the moment Logan is placed in my arms, all the worries, doubts will go away. Everything is exactly as it is suppose to be-Me and my boys, my three boys. Life is good now but life is going to get so much sweeter in a matter of days! 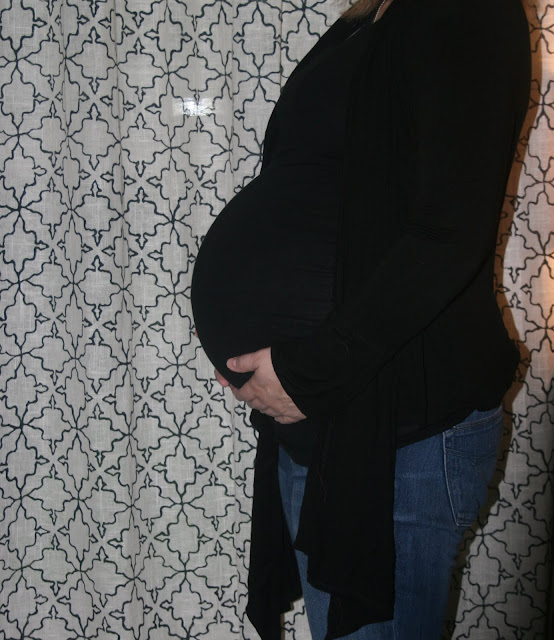 Not the best picture, trust me, there is space between my bump and boobs! 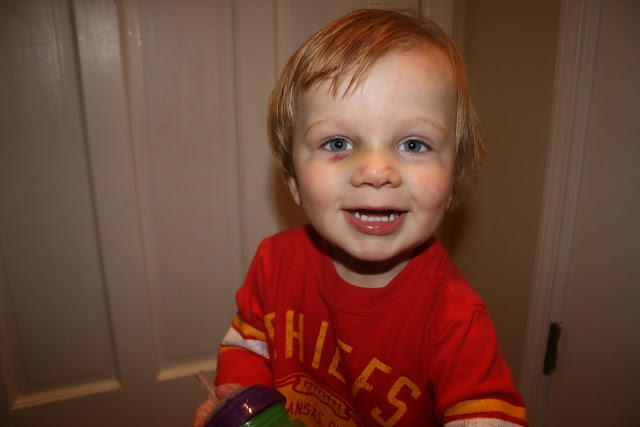 As you can tell, Monkey's nose got a little more black and blue but it isn't broken, well Dr. Mom says it isn't broke. He has been in such a great mood and has no care in the world when it comes to touching his nose or me messing with it so because of the lack of pain, we don't believe it is broken-I know, scientific. We are keeping our fingers crossed that the black and blue-ness goes away soon because family pictures will be done soon after Logan is born and gotta get a shot of my two boys together.
*Also to note-the haircut. We finally trimmed it up, hopefully now he doesn't look so homely.
Posted by Kayla South at 9:21 PM