A Major Snap and Some Randoms...

I have to take a moment and just say what a proud momma I am tonight. Kaden has successfully completed his 4th night of falling asleep in his big boy bed. We have not had any, I mean any issues-no crying, no getting up, no waking up in the middle of the night and wondering around. The transition seems to have gone better than we could have hoped for and I am so proud of our little monkey. Still, I knock on wood each night in hopes that we don't take any steps backwards. BUT, I can't take all the credit for such an easy transition and I must give props where props are due-So thank you Video Monitors! Instead of wondering what was happening with Kaden in his new bed, we just watched the monitor. We watched him roll from his stomach to his back, sit up and find his lovey, sit up and look at the door but almost immediately laid back down. I know we made it 18 months without a video monitor but I really honestly don't know how we did it. No opening the door and peeking in to see what is going on and waking him up just so you can start the process all over again. So if you are or have pondered a video monitor, no more pondering, JUST DO IT, you won't regret it at all!

A friend recently blogged about her oldest daughter enjoying their baby jumper even though she was a tad big for it. It made me chuckle a little and at that time, I wondered what all Kaden would want to get his hands on as we brought out all of his old stuff for his little brother. Well, I didn't have to wait long, Korie and Scott were over with Madi and we brought out our jumper for her to play with and Grammie thought it would be a great idea to put Kaden in it. I just shook my head... The next morning, all Kaden wanted was to be in the bouncer. I am not a total party pooper and allowed him to enjoy a few minutes of fun before breaking it down and hauling it off for a later date. 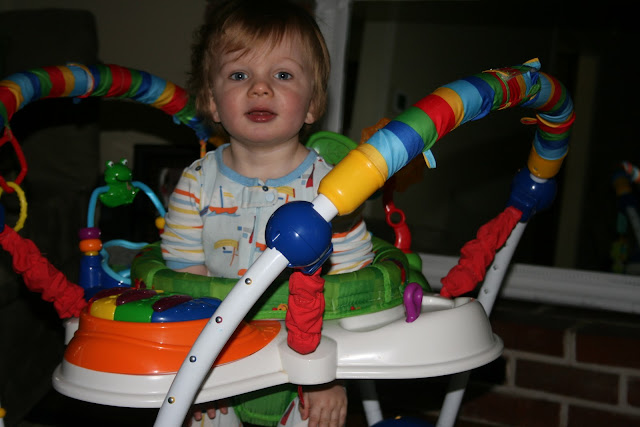 Kaden had a very cute St. Patrick's Day shirt but while at daycare he was able to enjoy an afternoon of outside play. He played. He got dirty. We changed his clothes. The poor kid has no green in his wardrobe, so we had to go with a hat and then a few beads. Like the previous 2 years, we were headed up to Birdies to celebrate not just St. Patrick's Day but also our anniversary-it was packed and the back room was reserved. So we headed to Sharks where we were met by Adam, Becky and Colton, Grammie Janet, Jay, Dawn and Noland, Jason B. and Patty. After eating we allowed the kids to get down and play. They danced with one another, chased one another and soon Kaden made it known that it was time to go. He was a little cranky (must have been why he fell asleep so quickly last night). 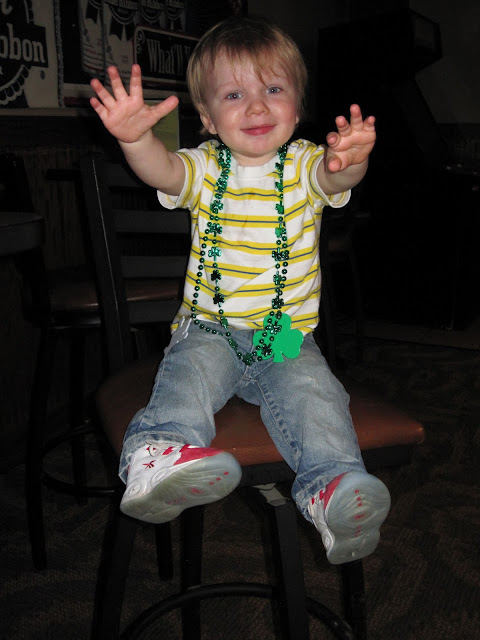 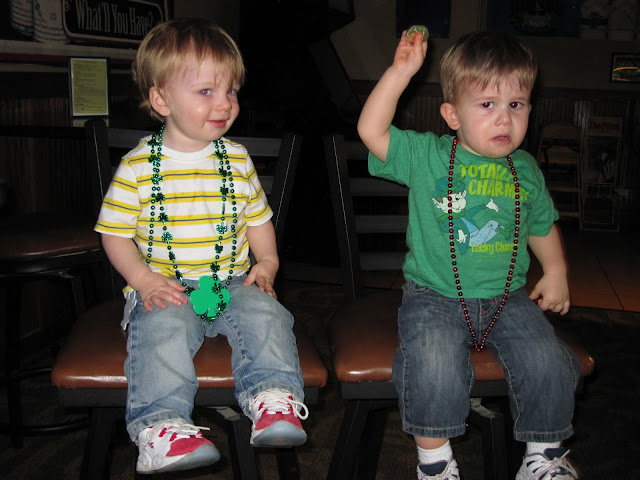 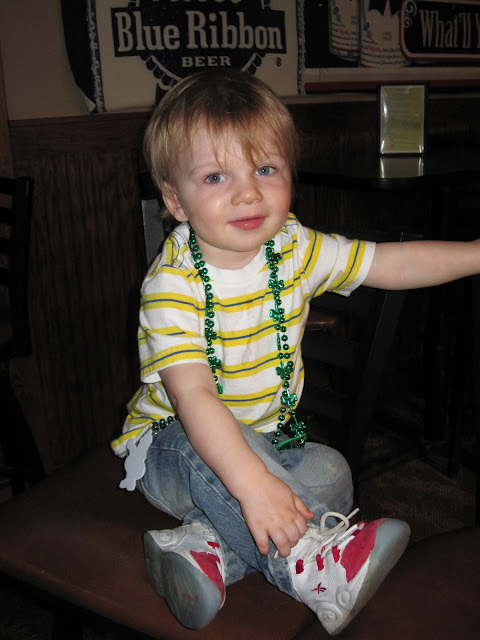 I have mentioned this before but I figured I needed to show evidence of Kaden's stellar dance moves. He dances to any kind of music but his favorite, RAP! Call me a bad mom, but instead of Old McDonald's E-I-E-I-O, we rock out to Nelly's EI! Kaden also likes Black Eyed Peas, BOOM, BOOM, POW because he is able to say BOOM, BOOM! I knew listening to all the rap while traveling back and forth to Carthage when I was pregnant with him would pay off someday!