In most cases, farewells are a sad occasion and it never fails that someone is either fighting back the tears or has lost complete control over their emotions but not this time. This was a long-overdue-get-the-heck-out-of-here-and-if-I-never-see-you-again-then-it-will-still-be-to-soon farewell. Today we were able to say goodbye to the dear old wallpaper border that has been in our house since day one. When Justin first bought the house, our dear friend, Jamie was our roommate and really didn't mind the border, so we left it. After getting married and Jamie moving out, it was an empty room which turned into a room that housed a few extra things that we had no other place for. Then we got pregnant and what was our guest room became the nursery and we cleared out the extra room once again now making it our official guest room but the border remained. Why? No idea, it was just one of those things that we didn't want to deal with but now it was time and it just had to go.

I spent a little time each night during this past week spraying the border down with dish soap and water and it just didn't seem to be doing the trick. (Thanks to the wonderful family before us who did such a bang up job when putting up the border.) Then a few angels suggested DIF, it was just $4 and at this point, what did I have to lose? Read the directions, easy peasy, right?! RIGHT! For once, something was just as easy, if not easier than it sounded, almost to good to be true! Within a few hours (completed in sections) the wallpaper was a thing of the past and the room is ready to be painted by my dear mother in just two short weeks. We officially have a house that is sands wallpaper and it feels great!! 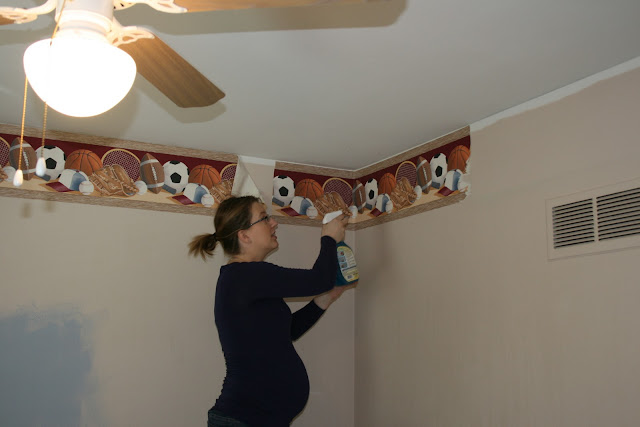 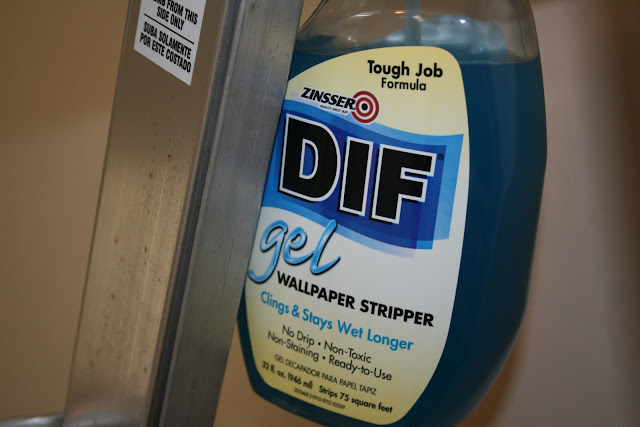 So we give a happy farewell to the sports border in our ever changing room as we go from a guest bedroom to Kaden's big boy room. Couldn't think of a better reason to finally be taking down that awful border! And yes, I got my 27 week pregnant self up and did some of the dirty work myself.
Posted by Kayla South at 8:53 PM